Everything wrong with my brand new 1991 Miata

First I'll start with a few little nitpicky cosmetic items, the first of which is that the car is missing it's MX-5 Miata badge! Now, to be fair, I could call this a weight saving mod or just be one of those people who remove the cars badges but I feel like it is a public service to educate people on what car I'm driving. A prime example of this is my uncle, who said he never heard of a Miata when I told what car a bought! Like I said, public service... 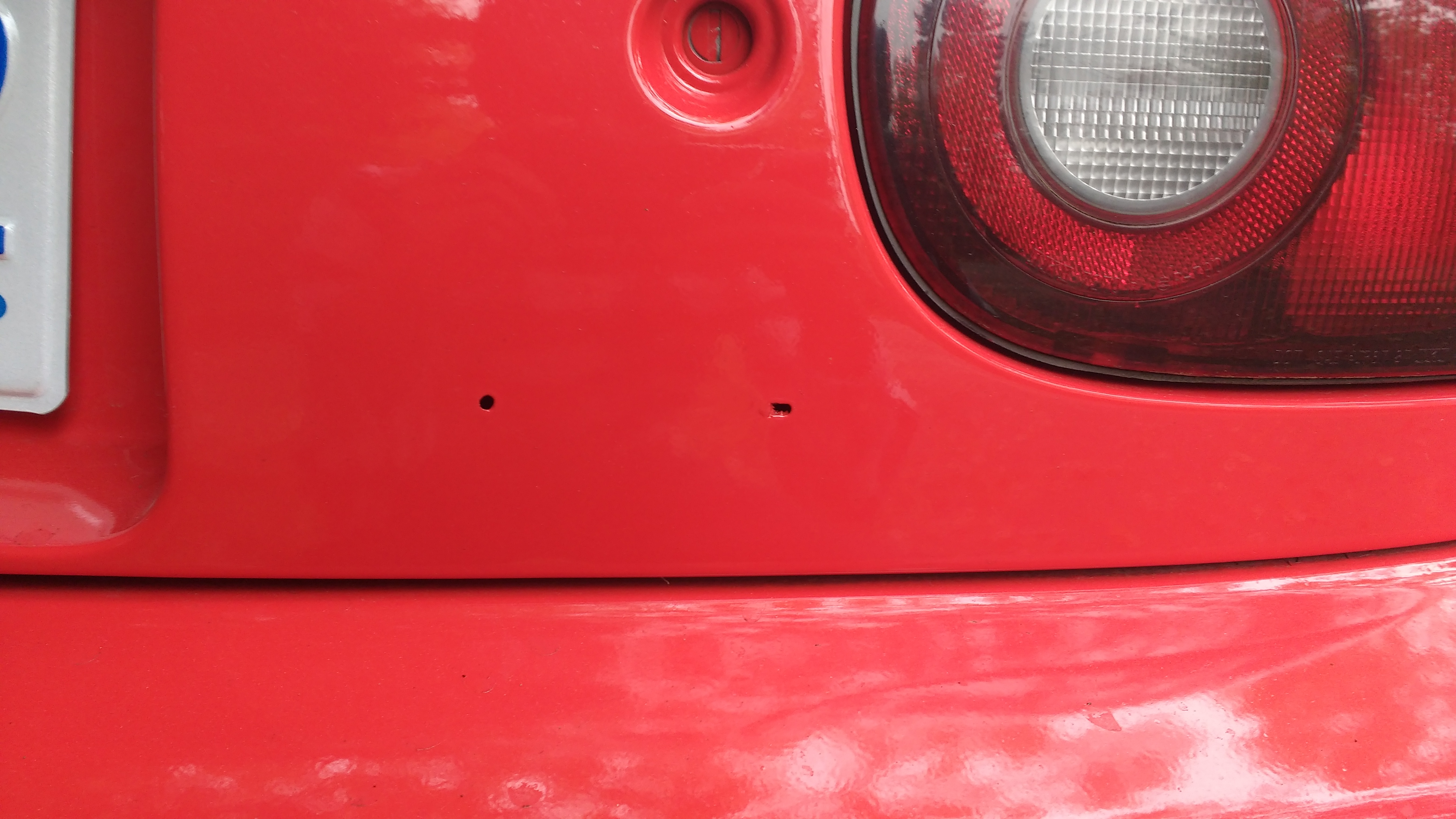 I drive a 91 Mazda Holes apparently.

The next cosmetic thing wrong with my Miata is that does not have its factory paint. The dealer I purchased it from did some body work on the car and decided to paint the entire car to make sure the colours matched. This is not necessarily bad in general, I just wanted to find a completely stock car (which I could not in my price range). Classic Red, in my opinion, is better than Flame Red. Last but not least, there are quite a few rips in the soft top which appear to be patched with some rubber/tar like substance. It kind of looks like someone got black caulking (if that exists) and just spread some over the rips. See for yourself, it looks pretty terrible. 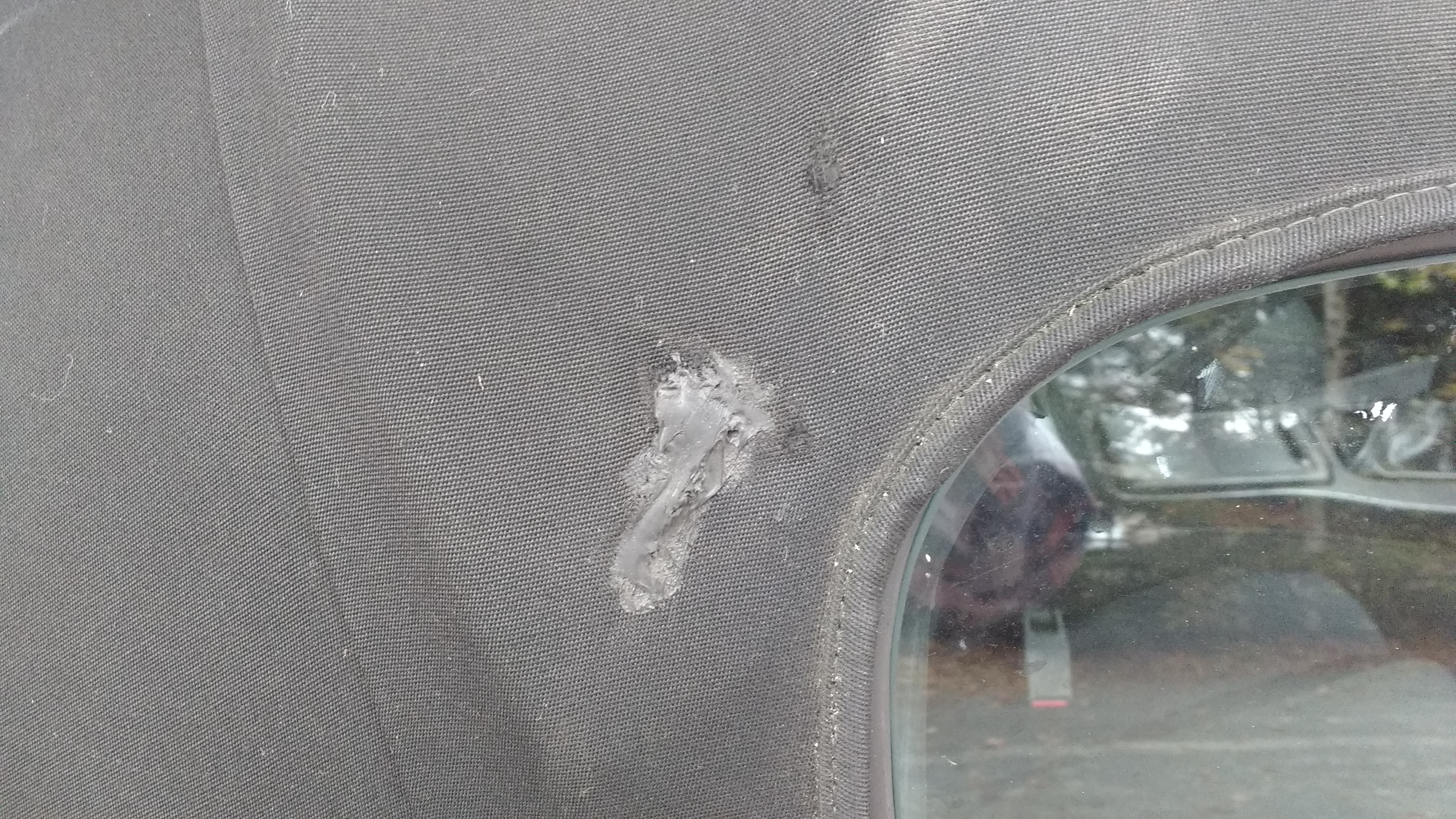 Or maybe it's just some old 5 Gum.

The next few items are real problems that eventually I hope to fix. Let's continue with the exterior of the car and we'll look at the passenger side door lock which does not work properly at all. The most annoying part is that I cannot lock or unlock the passenger door from the outside, hell, I can't even turn the key in the lock. The locking mechanism still works so I am able to lock the door under specific conditions. First, I tried to just lock the door from inside but it turns out that pulling on the handle from outside still opens the door. Next, I tried locking the door when it was open and then shutting which didn't work either... The only way I found to lock my passenger door was to lock the door while it was open and I am pulling on the door handle, then shutting the door and finally, release the door handle. This method only works about 50% of the time so like I said, very annoying.

Moving on to the interior of the car, the first thing that jumped out at me was that the aftermarket stereo was stuck too far into the dashboard. Now, I wouldn't mind this if the radio actually worked but it lifelessly sits there with the occasional flicker of a light. But wait! It doesn't lifelessly sit there, no it actually rattles and shakes and moves all over the place whenever I drive so I guess lifeless is a bit too harsh. A small side note, as the radio is not working, I also have no way of knowing if the speakers work either so I'm just going to assume worst case scenario and say they don't work either. 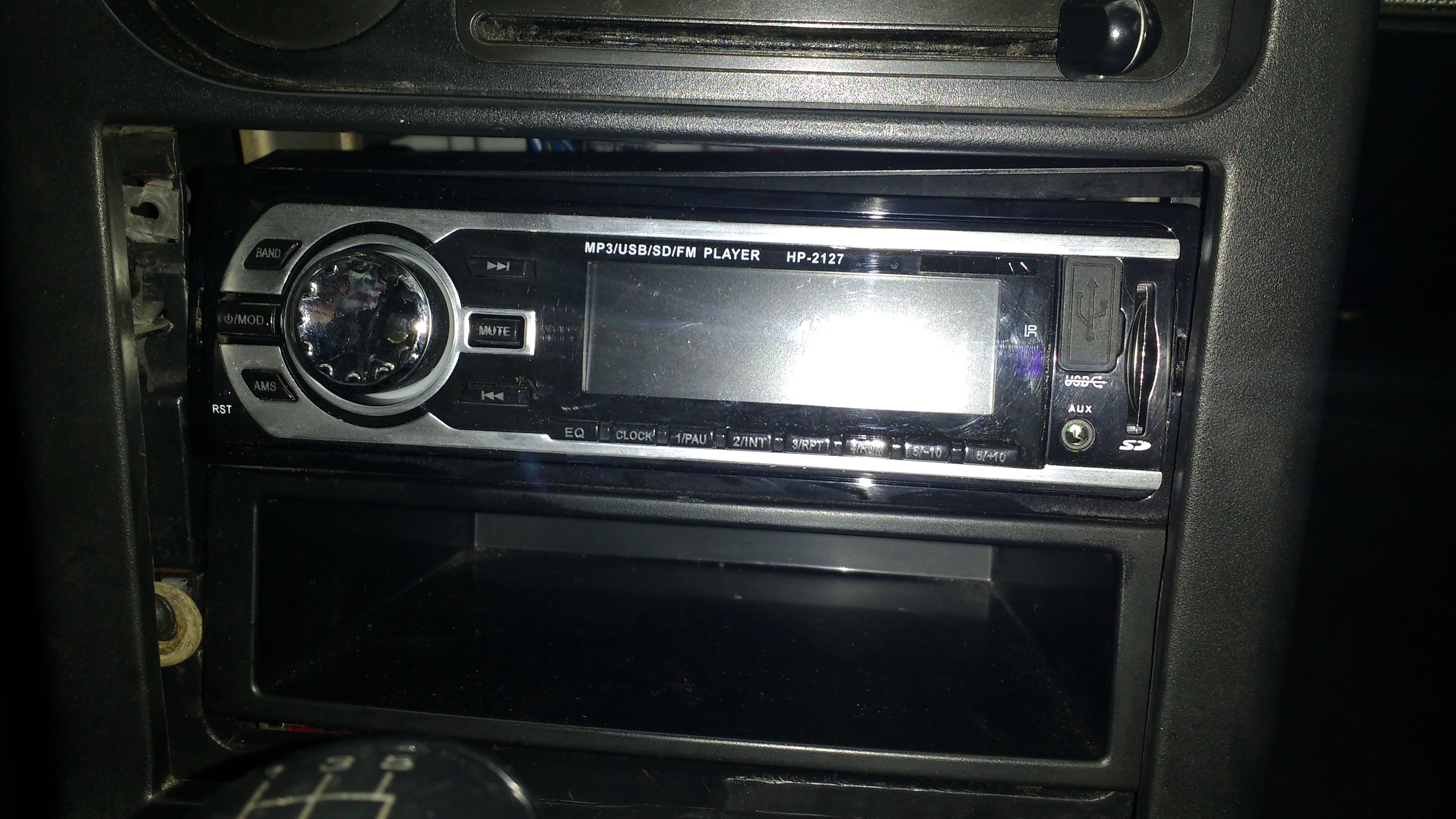 I guess it adds character?

Another possible symptom of the faulty aftermarket radio is that the dashboard/gauge cluster lights do not work. This makes driving a night incredibly difficult, especially for me as I am just learning how to drive stick. From what I've read on the interweb, this happens quite a bit when installing an aftermarket radio with something to do with the dimmer switch. Just to add some context, I am an early 20s university student who cannot drive his car at night and who cannot listen to music in his car either...

The last item I will describe in detail is that the fuel gauge does not seem to work. It does not move nor does it go down to empty when I turn off the car so I ended up being quite lucky when I picked up the car. It was about 90 kilometers (56 miles) away from my house so things could've turned out very differently on the way back. Either way, I made it home and I figure this just makes it even more of an adventure every time I drive my car. 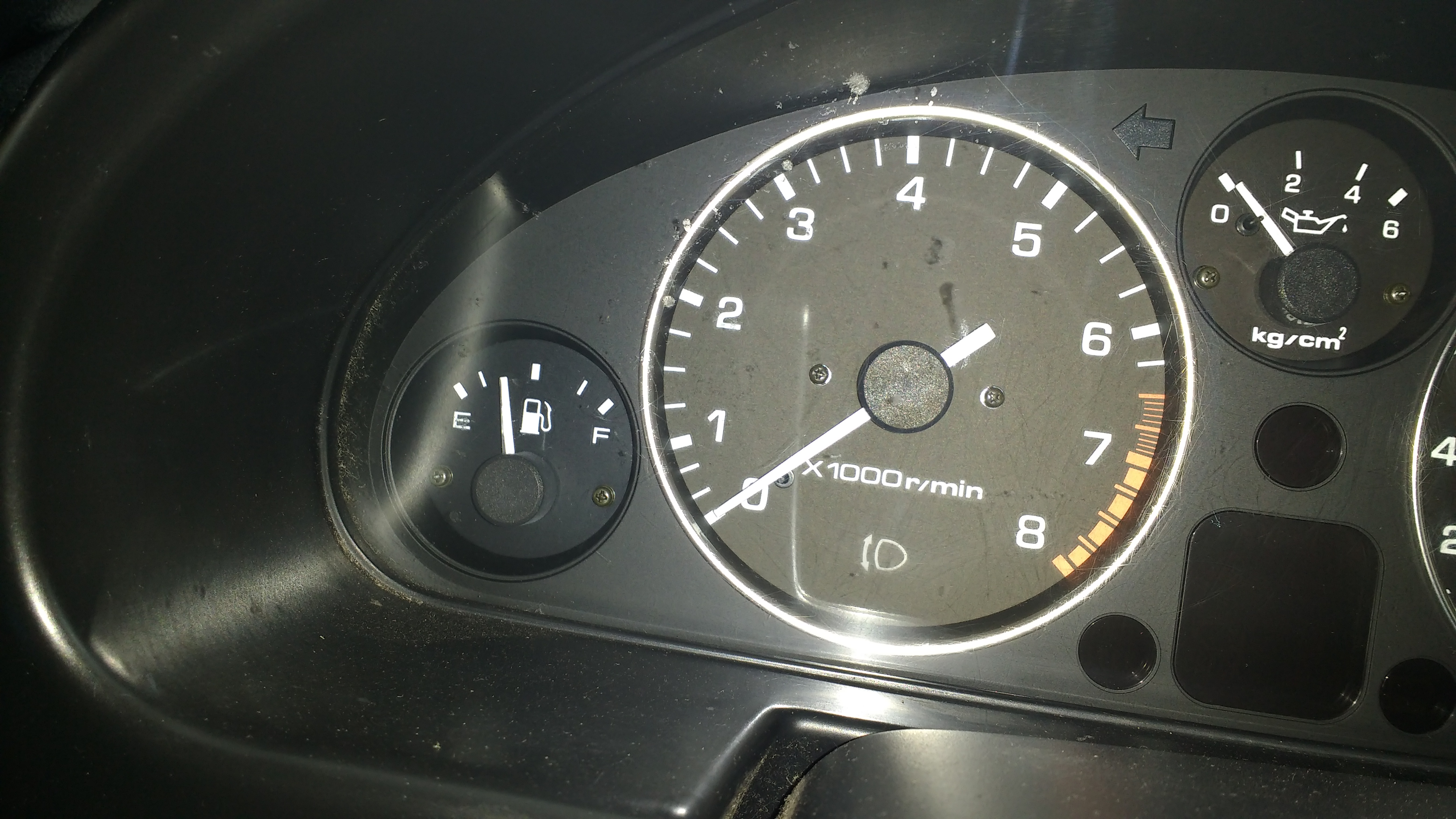 This is the first fuel gauge that I've seen the shows fuel levels when the vehicle is off...

A few other items: there is only one key, there is a large crack in the bottom of the truck lid (interested to see what a Canadian winter does to that), there's no truck carpet and there's no service history. But at the end of the day, there's a button I can push to make the headlights go up and down. That one button outweighs all of the faults in my MX-5 and that's all that really matter eh? 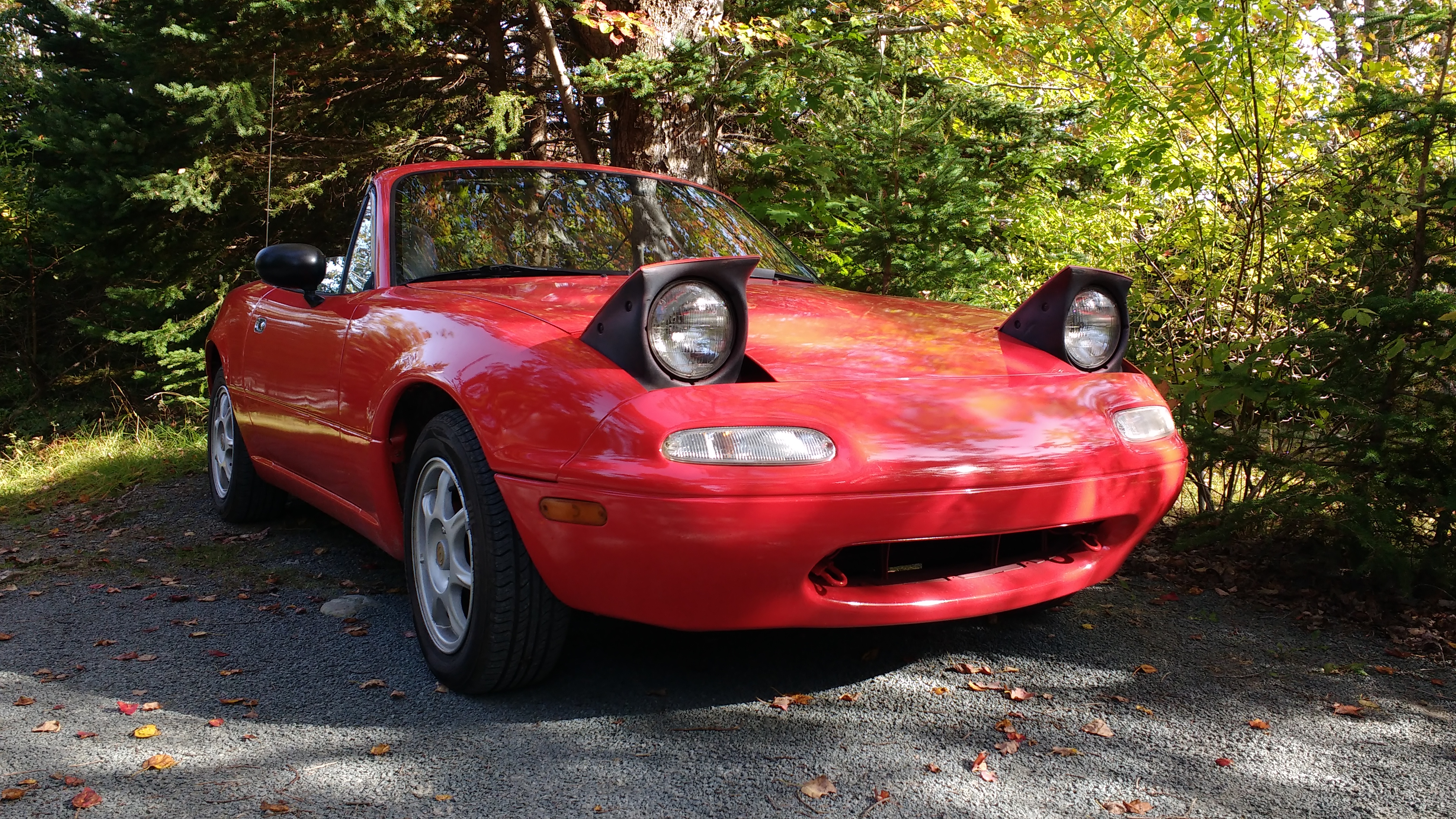