Thankfully, the wagon has evolved past the soft, dowdy complacency of its middle age. And yet the uncool long-roof shadow persists in the American consciousness, even as a vocal enthusiast subset imports family-oriented '90s Euro wagons and hot-rods them to the point of unrecognizability. There is a middle ground, slim though it might be, for those who equate utility with luxury. The 2017 Mercedes-Benz E400 wagon is perhaps its perfect exemplar.

It happens that Northern Germany is a perfect place to demonstrate its charms. Our drive route took us from the ancient river port of Hamburg to a resort at the shore of the Baltic, with evenly spaced trees lining chalkboard-smooth roads along the way. The scenery, and the asphalt, was chosen to highlight the car's aesthetic and dynamic appeal – mission accomplished. On the same trip, and the same roads, we also drove the 2017 Mercedes-AMG E43 sedan. The contrast there was informative.

Some background before a compare and contrast. The E400 wagon is indeed coming to the United States, and in only one flavor: its 3.0-liter, twin-turbo V6 backed up with a 9G-Tronic nine-speed automatic and 4Matic all-wheel drive. The other two E-Class models have an equally narrow scope: The E300 is only available as a sedan, with a 2.0-liter turbocharged four, the same 9G-Tronic, and the option of rear- or all-wheel drive. The E43 will only come here as a sedan with 4Matic and is powered by a higher-output version of the E400's V6. Abroad, the powertrain options are much more extensive. There's even an E43 wagon. 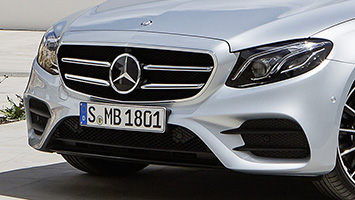 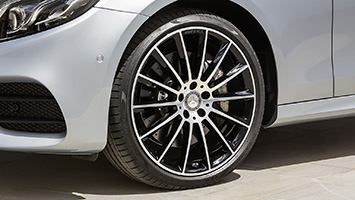 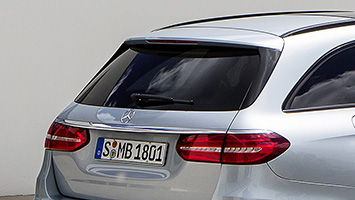 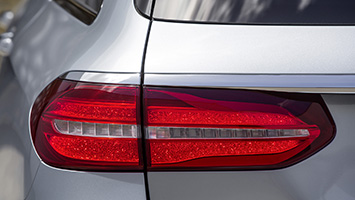 At least the singular powertrain option on the American menu makes sense; the wagon's utility is well complimented by the peace of mind that all-weather traction provides, and indeed it's consistent with the last-gen E350 wagon. With 329 horsepower and 354 pound-feet of torque on hand, it's able to hit 60 miles per hour in 5.2 seconds, just 0.7 second behind the E43 sedan. Driving the E400 wagon and E43 sedan back-to-back raised a surprising question: Which would we recommend?

As that narrow accelerative difference shows, the two offer similar performance. This despite the E400 being down 67 hp and 30 lb-ft on the E43. Let's consider the rest of the package. To begin with, the E400 is only available as a wagon, so there's an inherent utility bonus, and it gets a boost for the latest generation. Compared to the last E wagon, the E400's wheelbase and overall length are slightly greater, but width and height are down – even so, the cargo area swells by 6.9 cubic feet. Impressive. This is at least partially due to a second-row seatback that can be adjusted more vertically to allow for more cargo room without displacing its occupants.

This wagon looks sharp, particularly dead-on from the rear. The wide, slim taillights stick out from under a chrome brow and draw attention away from the tall roof. In between, there's the electrically operated rear hatch that goes up and down with a kick under the bumper. Peer through the rear glass and you might catch a pair of eyes staring back at you. Our test car didn't have it, but US-spec cars get a standard rear-facing fold-away third row that can hold a couple of youngsters. 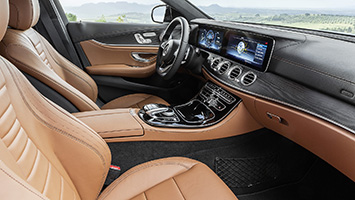 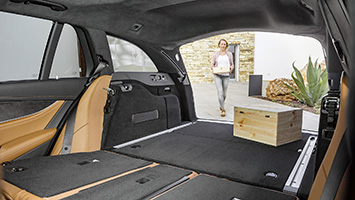 Those rearmost kiddos are missing the biggest draws in the E-Class in general, like the rest of the coddling interior and its many tech goodies. We've covered the Drive Pilot near-autonomous driving suite of technologies in reviews of other E-Class variants. If you want Drive Pilot, prepare to drain one of your accounts to the tune of $11,250 for the Premium 3 package, which to be fair also includes a long list of other neat tech and comfort features. If you only want the TFT gauge cluster, one of the neatest bits, you'll be happy to know it's an $850 standalone option.

The last piece of the puzzle is the driving experience. Like many of its E-Class wagon predecessors, the E400's rear axle gets standard self-leveling air suspension, and Air Body Control air suspension is available if you want it on both axles. Get it. Our test car was so equipped, and it rode beautifully. Mercedes has been getting ride comfort right for a long time, and the E400 wagon continues this trend by providing suppleness without any appreciable float. That's despite the bulk – the wagon weighs a not-insubstantial 4,497 pounds, or 352 more than the E43 sedan.

This new wagon is also incredibly quiet, something that Mercedes admits isn't easy to do with a large cargo area that can resonate like the body of an acoustic guitar. There's nothing too fancy involved in quelling noise: Standard wagons get a bunch of extra sound deadening, and things like the sunroof and door handles have been sealed and redesigned to transmit less wind noise. There's an optional Acoustic Comfort Package for US buyers, which adds laminated front and side glass and extra sound deadening material for an even more vault-like experience. Not that there was much noise to transmit in from the smooth roads and bucolic surroundings.

The sounds the twin-turbo V6 made managed to get past the serious noise-reduction measures were just enough to add a little verve to the experience. Driven back-to-back with the E43, the E400 wagon is restrained, but it's no slouch. In fact, romping on the wagon might be more enjoyable. There's plenty of roadholding, but with the softer suspension tune there's also a bit of roll to better communicate a sense of speed. And while the E400's engine and transmission aren't calibrated to provide the explosive forward progress of the E43, that also means it moves off with smoothness and refinement – and as we said above, it's undeniably quick for a big fat wagon. 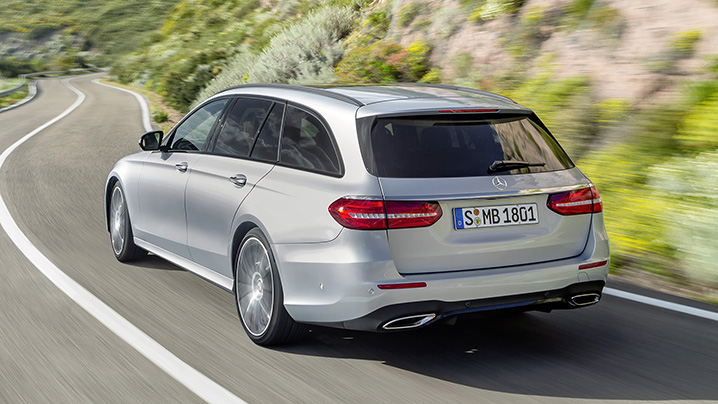 Perhaps the more important differentiation is in steering feel. Both cars use an electromechanical rack, but the E43's variable ratio steps up in an unnatural and rather jarring way unless you're on a flowing country road with the right sort of cadence. The E400 has a more natural-feeling rack that's accurate and direct. At speed or in traffic, it's more intuitive and more pleasant to use, and it helps make this hefty Benz legitimately fun to hustle around.

Mercedes-Benz is smart not to offer this powertrain in the lighter sedan if it wants to move E43s. And so, E-Class buyers have an interesting choice. There's a strong argument to be made for the handsome wagon, since its stronger engine adds more to the mix than simply countering its increased mass. It's handsomely proportioned and undeniably utilitarian, carrying seven without the additional weight or higher center of gravity of a GLE-Class.

And then there's the E43, faster and lighter. But not much of the former, and the latter is offset by the greater powertrain refinement and suppler handling of the E400 wagon. At least until the superlative E63 hits the scene, if you want some performance but must have a sedan form factor, the E43 makes a lot of sense.

If you can look beyond any prejudices you may have about choosing a wagon over a sedan or SUV, we'd argue that the ultimate E-Class is the E400. Its compelling mix of style, performance, and composed refinement is enough to sell it over the E300 sedan. Factor in the cargo space, seating for seven, and the more pleasant dynamics when compared to the E43, and the E400 wagon stands apart.