Chris Bruce
If you watch the Super Bowl on Sunday, expect to see a lot of Hyundai advertising. The South Korean automaker has two spots set to air during the game and two others that will premier before kick-off. The in-game commercials are now online, and they both use humor to market the 2017 Elantra.

Ryanville (above) is an odd commercial about a town full of Ryan Reynolds clones, and two smitten women drive through the village to gawk at the actor. It's a forgettable ad unless you really like Reynolds, but Hyundai gets plenty of opportunities to show off the Elantra, including features like the available pre-collision braking.

If you want something with a little more action, watch The Chase (below). Angry bears run after a frightened couple, and the Elantra's voice-activated start feature allows the people to get out of trouble in the nick of time. The ad finishes with a little humor to lighten the mood. This commercial still isn't memorable, but it's the better one of this pair.

Hyundai hasn't released either ad for before the Super Bowl yet. First Date will star comedian Kevin Hart in a spot for the Genesis sedan, and Better will highlight the automaker's desire to improve its vehicles and customer experience.

FOUNTAIN VALLEY, Calif., Jan. 28, 2016 – In its first year as an official NFL sponsor, Hyundai will delight Super Bowl 50 fans with four entertaining ads set to run on Super Bowl Sunday. Hyundai will run a 60-second ad in the coveted pre-kick time slot, two 30-second ads during the game and a 60-second ad during the pre-game show. With help from A-list celebrities Kevin Hart and Ryan Reynolds, Hyundai will highlight the safety, technology and convenience features of its all-new 2017 Elantra and premium 2016 Genesis sedan. Hyundai will build on the creative digitally with heavy social media activity that will drive additional anticipation and awareness of the Super Bowl spots. Creative was developed by Hyundai's agency of record, INNOCEAN Worldwide.

"Super Bowl Sunday is our opportunity to participate in the most-watched TV and live event in the U.S. This is our first Super Bowl as an official NFL sponsor, and we wanted to use a unique storytelling approach and A-list talent to delight and entertain the fans while showcasing the latest technology available in our vehicles," said Dean Evans, chief marketing officer, Hyundai Motor America. "We are honored to be a part of the conversation during the most important day of the NFL season."

"First Date," a 60-second ad that will air during the coveted pre-kick time slot, features Kevin Hart and highlights one of the incredible technology features of Hyundai's premium Genesis sedan. With the help of his Hyundai Blue Link Car Finder feature, Kevin does what every dad in America will envy to ensure his daughter gets home safely. The spot was directed by the legendary actor, director, writer and producer Peter Berg of Pony Show Entertainment.

"Part stuntman, part overprotective dad, altogether hysterically funny. There will be plenty of beer coming out of people's noses this Super Bowl, thanks to Kevin being in this spot," said Eric Springer, chief creative officer, INNOCEAN.

"The Chase," a 30-second in-game spot running in the first quarter, highlights the convenience of Hyundai's voice-activated Blue Link Remote Start feature on the all-new Elantra. Viewers will see that this feature can truly be a lifesaver. "The Chase" was directed by Aaron Stoller of Biscuit Filmworks.

"Ryanville," the second 30-second in-game spot, slated for the second quarter, takes a lighthearted look at the simple fact that all humans are prone to distraction. Highlighting the advanced safety features on the all-new Elantra, the ad tests the ability of two women to keep their eyes on the road while driving through the most distracting neighborhood ever. This spot was also directed by Peter Berg.

"Ryan gave us so many funny moments, we could have made five more commercials," said Barney Goldberg, VP, group creative director, INNOCEAN.

Hyundai's 60-second pre-game spot, titled "Better," follows the life of a boy from birth through to adulthood as he strives to make the world a better place. It is the first ad in Hyundai's new branding campaign, which captures the company's mission to make its vehicles and the entire consumer experience better. Through human-focused technology, distinctive design and uncompromising workmanship, Hyundai strives to make things better for drivers everywhere. The ad was directed by Fredrik Bond of MJZ Productions.

The 2017 Elantra is Hyundai's MVP in this year's Super Bowl ads, starring in two of the four spots. The all-new, sixth-generation Elantra builds on the momentum and success of its proven award-winning formula and strong value proposition by offering a bold aerodynamic design with sophisticated styling, all-new efficient powertrains for enhanced fuel economy, better ride quality and noise insulation and comprehensive safety with class-above features. 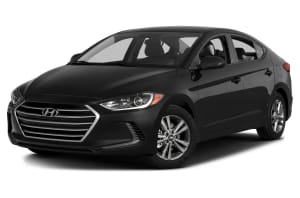