Chris Bruce
Cadillac was once famous for opulent, V16 luxury vehicles, but this bizarre 16-cylinder 1999 Eldorado that's for auction on eBay Motors isn't much like its ancestors. Dubbed the TwinStar, this beast features a Northstar V8 with 275 horsepower to drive the front wheels and a second Northstar with 300 hp is in the trunk to spin the rear axle. Each mill has its own four-speed automatic gearbox, and the result is a total of 575 hp of all-wheel drive fury in an incredibly weird package.

The TwinStar's interior and exterior certainly don't hide the odd powertrain setup. To fit the engine in the trunk, the builders pushed the rear wheels further back and lengthened the wheelbase. There are also scoops low on each side to funnel air to the V8. Inside, there's a second ignition on the side of the center stack, and a digital instrument cluster replaces the glove box. It's sure to confuse any passenger you can convince to take a ride in this thing.

Mosler, the supercar company known for models like the MT900, built five TwinStars, according to the auction. The seller links to the original review by Car and Driver, and the magazine noted that the sensation of the two engines working in tandem was rather odd. However, the TwinStar was a capable performer and ran to 60 in 5 seconds in its test.

If you want to start your new year with the oddest vehicle possible, the TwinStar's auction sits at $5,600 with the reserve not met as of this writing, and it ends January 2, 2016, at 8:00 PM ET. If you can't wait that long, the dealer lists the car online for $39,900. There's also a spirited conversation on Bring a Trailer about this automotive oddity. 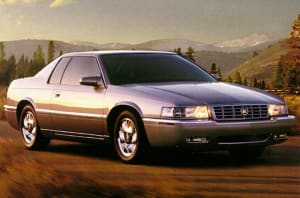