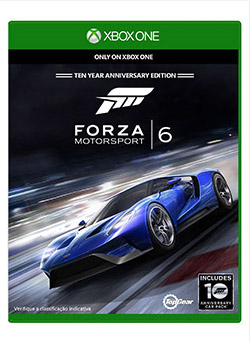 Forza Motorsport 6 is unlike any racing game that's come before it. It takes the basic concept of racing games – buy cheap, race, win money, buy faster, race, rinse, repeat – to an extreme that is, at times, debilitating to the playing experience. Fortunately, everything else is so damn engrossing and fun that the extreme linearity can't ruin the sixth installment in the long-running franchise.

When we say linear, we mean really linear. There are five different "volumes," ranging from simple, affordable, everyday performance cars to top-tier racers. Each of these is made up of three, four- to six-race series. You can't run in volume two, though, until you complete volume one, which means the time investment to get to volume five is rather large.

The upside to Turn 10's approach here, is that you're going to be exposed to a lot of different vehicle types. Each volume comes with six vehicle classes. You can run an entire volume with one class, or switch it up after every series. This doesn't solve the linearity issue, but constantly shifting into different vehicles does keep the racing somewhat fresh.

You'll have no problems collecting cars, either. It is hilariously, absurdly easy to win cars in this game. Not only does your previous Forza experience earn you a few vehicles before you even take your first green flag, but the new prize square will guarantee some high-dollar metal. Every time you level up, you'll be shown a nine-tile square and asked to "spin" for either a new vehicle or a large sum of credits. Each level's drawing has a grand prize in the center of the square. Level one to two, it's a Bugatti Veyron Super Sport. Two to three is a million credits, and so on. Like we said, these are grand prizes. And as Senior Editor Seyth Miersma notes, it's darn easy to win the grand prize – he got three in a row. 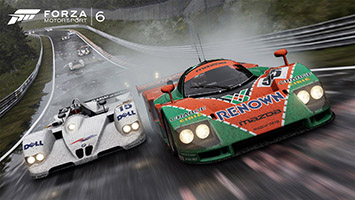 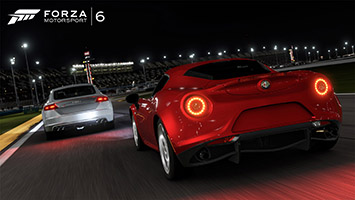 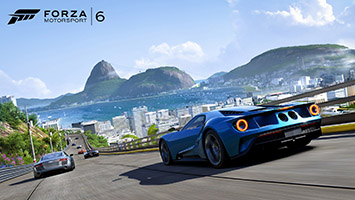 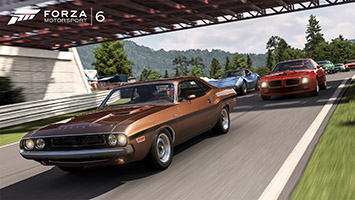 Lose it and run into a tire wall, and watch the rubber explode up and around you.

But what are these cars actually like in the game? The physics aren't significantly different than Forza 5 – we played them back-to-back, just to check – but that doesn't make them any less impressive. Cars feel natural and realistic in the way they respond to bumps, and there's a real feeling of weight transfer around the vehicles.

Where Forza 6 excels is in the physical interaction with the area just around the track surface. Lose it and run into a tire wall, and watch the rubber explode up and around you. Tires bounce and roll and are stuck on track throughout the rest of the race. It's a little detail, but it certainly adds to the sensation that you're actually out racing.

But nowhere do the in-game physics give a better showing than in the rain. "So, the things that we've done in rain I believe are unprecedented in gaming. We've got standing water that's fully simulated on the track and, depending on the size of your tires and how fast your angle of attack is, those tires will aquaplane and you'll be along for the ride," Turn 10 Studios Creative Director Dan Greenawalt told IGN early last month.

The game's puddles are stunning and frustrating in equal measure. Turn 10 looked at actual footage from every wet track in the game to determine where and how puddles formed, and then packed in loads and loads of science about the track surface to figure out just how they'd form and how they impact different kinds of cars. The result is that on wet circuits, you're forced to rethink everything. Rain is yet another layer that makes for truly entertaining racing. Miersma came to a similar conclusion, too, saying wet-weather racing makes for a "second-to-second concentration challenge." Perhaps our main criticism is this – when you spin into the grass (and spin you shall), there's no mud or grass. Your car doesn't get appreciably dirty, despite the standing water on the outside of the track. Other small, realistic details, though, are present. For example, drive under a small bridge, and the constant patter of rain on the windshield abates. 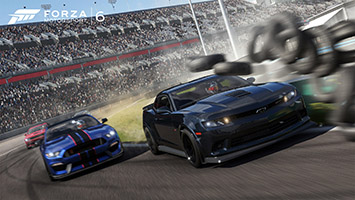 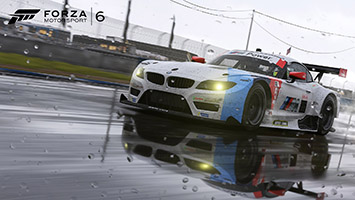 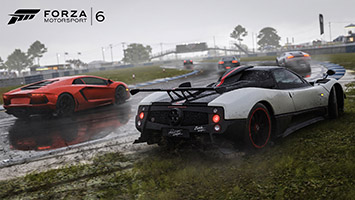 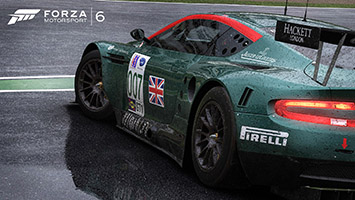 We get that track temperatures drop at night, but the execution here feels heavy handed.

If only the same were true of night driving. Again, we touched on this in our review of the FM6 demo, but as it stands right now, night racing just isn't that great. It's like Turn 10 approached driving in the dark the same way other franchises have approached wet-weather racing, using it as a blanket method to reduce grip around the track. We get that temperatures drop at night, but the execution here feels heavy handed. It's frustrating, and it's not the only problem with night racing.

Part of the challenge of driving at night isn't just seeing ahead of you, but behind. As other cars tail you, you're forced to deal with the distraction of their bright lights in your mirrors. But in FM6, it's like all the vehicle headlights are tinted or smoked. That goes for your car, too. We know racers always want more light at night, but having driven some of the vehicles featured in game, I can attest that their headlights are significantly more powerful than what's presented here.

But the most disappointing thing – and this goes for the rain, too – is that weather and light conditions are based exclusively on the track selected. Unlike Project CARS, this isn't a dynamic weather system. Where that game gives you a variety of rain intensities, fog, clouds, and straight-up thunderstorms, not to mention the ability to race at literally any time of day, Forza 6 forces you to choose between day, night, or wet weather. There's no way to race in the wet at night. There's no way to start the game's endurance events in the afternoon and run into the evening. It's a major shortcoming, and not just because Project CARS executed it so flawlessly, but because Turn 10 has experience with both varying types of weather and day-to-night transitions, thanks to Forza Horizon 2.

While the lack of dynamic weather is Forza Motorsport 6's single biggest fault, its biggest asset is equally huge. The Drivatar system is simply amazing. By taking the Drivatar profiles from gamers across the globe, Turn 10 has a nearly infinite source of AI profiles with which to challenge racers. Drivatar isn't new, It first appeared in Forza 5, but in this latest installment it is better than ever. 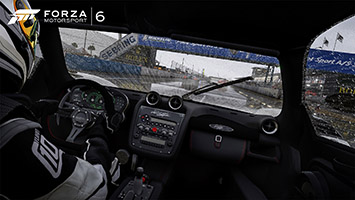 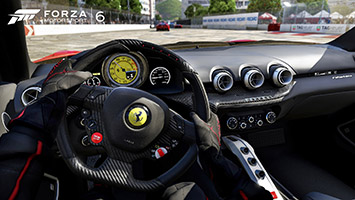 Perhaps the best thing to come from the Showcase events, though, is the long-awaited arrival of endurance racing.

Opposing racers behave like humans. They can be intimidated and bumped, and they make silly mistakes, just like you or I. An AI car can be leading the entire race and out of nowhere, come into a turn too hot and understeer off track. There are little differences in lines through the corners, and the interactions in the first-corner scrum looks far more realistic than ever before. The game also scales difficulty nicely. There's a clear difference in pace between difficulty levels, and should the computer notice you dominating one rank, it'll ask you if you'd like to move up to the next level (you can turn this off, of course).

What most sets Forza apart from past titles is the lengths it goes to add some variety, almost like the designers realized the linear career mode might get stale. One of those is Mods, card packs you can win or purchase that allow you to enhance your crew, take a money-making dare, or give a one-time boost that can net you more credits, more experience, or slightly increase performance. Truthfully, I largely ignored the mods. You don't win them often enough to really get a big variety, and as Miersma notes, they "feel like a hacked-in way of making the game feel more current."

The new Showcase events are a much bigger success, though. There's silly stuff like Car Bowling on the Top Gear test track, to more serious affairs like autocrosses, spec races, Moments in Motorsports, and the "Race Driver Experience." Perhaps the best thing to come from the Showcase events, though, is the long-awaited arrival of endurance racing in the Forza Motorsport series. With nine long races, not to mention the motorsports-intensive events elsewhere, the Showcase is where you go if you're starting to get burned out on the Career mode. 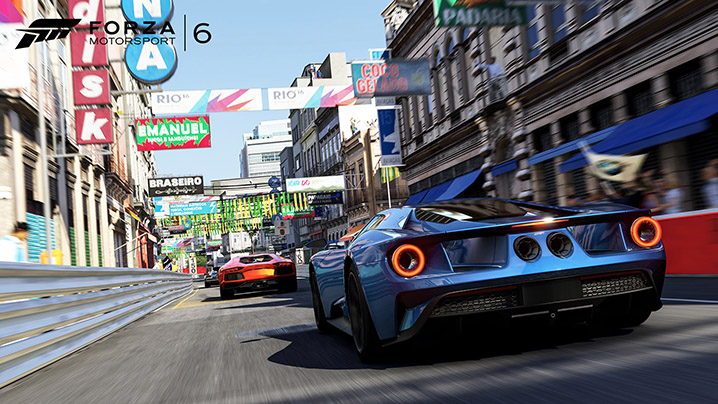 This is a far more complete, entertaining, and engaging game in every way.

Multiplayer also gets a small overhaul, with the new League events. These scheduled events are put together by Turn 10 to offer a more competitive aspect than typical online play, and focus on certain aspects. They're really kind of like the career events, but online. For every League event a player runs in, they'll earn points. Once the league closes out, those points are converted into credits, giving a single-player incentive to try this new online format. We tested it out with Turn 10, and while it has potential, its ultimate success rests wholly on the ability to keep the events fresh and engrossing.

There are a number of other small, frustrating details in FM6. There's a distinct lack of information in the career mode – you have no idea what track you're headed to until after the previous race – and the Windows 10-like menu setup is cumbersome. The customization options are still the best out there, but aside from a few new paint schemes, the overall offering has been left unchanged for years. These warts, though, aren't going to hurt your desire to race.

Forza Motorsport 6 will to appeal to a lot of gamers, whether they be casual or serious racing fans. But more than any one group, FM6 going to lure in those who were disappointed by Forza 5. This is a far more complete, entertaining, and engaging game in every way. Not only does it finally deliver a reasonable car and track listing, but it offers a wide variety of experiences outside of the career aspect. There's still room for improvement, but you'll be hard pressed to find another title that can so easily suck in hours and hours of your day. Forza Motorsport 6 will be open for owners of the $99.99 Ultimate Edition on September 10, while everyone else will gain access on September 15.