RM Sotheby's wrapped up three days of beautiful cars crossing the block during Monterey Car Week with a company record of $172.7 million in vehicles sold. The first day's Pinnacle Portfolio collection alone brought in $75.4 million, a new high for a one-day, single-vendor auction. While nothing ever topped the $17.6 million 1964 Ferrari 250 LM, the hammer continued to fall on some very expensive vehicles each day. 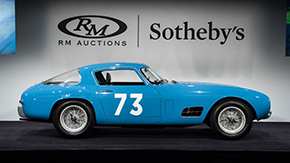 Expected to clear over $11 million, the sale of a 1956 Ferrari 250 GT Berlinetta Competizione 'Tour de France' easily managed that with a final price of $13.2 million. Multiple bidders on the phone and in the room desperately wanted this famous racer, and it drove the price up. To make this thoroughbred worth the lavish amount, the coupe won the 1956 Tour de France series of events and was among seven with this body by Scaglietti.

Many of the top sellers came from the first night's Pinnacle Portfolio, but records continued to be broken over the weekend. Notably, a 1953 Jaguar C-Type Works Lightweight brought $13.2 million to make it the most expensive Jag ever at auction. Also among RM Sotheby's top sellers were a 1950 Ferrari 275S/340 America Barchetta at $7.975 million and a 1952 Jaguar XK120 Supersonic for $2,062,500. Take a look at a few of these special vehicles in the gallery above.

MONTEREY, CALIFORNIA (August 15, 2015) - A historic 1956 Ferrari 250 GT Berlinetta Competizione 'Tour de France' set a new auction record for the model tonight, selling for an outstanding $13.2 million before another packed house at RM Sotheby's Monterey event. Spurring a lively bidding contest between multiple collectors in the room and on the telephones, the influential Ferrari is the actual car that instituted the 'Tour de France' nomenclature following its overall victory at that legendary race in 1956. The fifth of only seven Scaglietti-bodied first-series competition berlinettas, it was sold new to the Marquis Alfonso de Portago, the flamboyant and daring Spanish driver, who, joined by his close friend Ed Nelson, piloted to car to first place overall at the 1956 Tour de France Auto.

The Saturday sale session rounded out a tremendous three days for RM Sotheby's on the Monterey Peninsula, with the unofficial tally sitting at $172.7 million* in auction and post-sale auction private sales. An increase of over 20 percent on the company's 2014 performance and already a record for the highest grossing collector car auction of all time. No less than 35 vehicles achieved million-dollar-plus results, with four lots exceeding $10 million.

Full results will be published early next week at www.rmsothebys.com.

*Results are listed in USD and are inclusive of 10 percent buyer's premium. Sales totals include post-auction private sales

MONTEREY, California (August 15, 2015) - RM Sotheby's has continued its strong sales run in Monterey, California, generating in excess of $120 million in auction and post-auction private sales during the first two nights of its flagship event.

Setting the tone for the weekend, the Pinnacle Portfolio - an extraordinary single-vendor collection of post-war sports cars - generated a record $75.4 million on Thursday evening. The outstanding result represents a new record for a private automobile collection sold during a single-day sale.

Comprising a superlative group of iconic sports and racing cars of the 1950s and 60s joined by a superb roster of contemporary supercars, the two-hour Pinnacle Portfolio auction saw 25 vehicles cross the auction podium before a standing-room only crowd, with active bidding throughout the evening both in the room and on the phones, including collectors bidding with Sotheby's representatives.

Road-going race cars topped the bill at the Thursday sale, with the historic 1964 Ferrari 250 LM and the 1998 McLaren F1 'LM Specification' leading a string of 14 individual million-dollar-plus sales. Boasting a rich racing history, the 1964 Ferrari 250 LM roared onto the auction stage to applause from the crowd before selling for a final $17.6 million – a new record for the model at auction. Likewise, the 1998 McLaren F1 'LM-Specification', one of the most iconic supercars of the modern era, also set an auction benchmark. Extraordinarily rare – it is one of only two examples upgraded by McLaren Special Operations to feature an LM-spec engine and the 'Extra High Downforce Package' – it realized a remarkable $13.75 million.

As a group, the roster of contemporary supercars included in the Pinnacle Portfolio attracted tremendous pre-sale attention, which translated into spirited bidding and numerous lots exceeding expectations. Rounding out the top three sales of the evening, the 2005 Ferrari Enzo, gifted by the factory to Pope John Paul II and later sold to benefit tsunami victims, achieved a terrific $6,050,000, shattering the previous auction record for the model.

Within hours of the sale's conclusion on Thursday, the 1959 Ferrari 250 GT LWB California Spider of the Pinnacle Portfolio sold privately for $8,500,000, which has been added to the impressive sale tally.

The momentum continued Friday evening with an additional 12 vehicles achieving million-dollar-plus results. Top honors went to the legendary 1953 Jaguar C-Type Works Lightweight, chassis XKC 052, one of just three examples built, which raced to an outstanding $13.2 million to enter the history books as the most expensive Jaguar ever sold at auction. Other highlights of Friday's auction included a landmark 1950 Ferrari 275S/340 America for $7,975,000; and, a stunning 1952 Jaguar XK120 Supersonic for $2,062,500. A 1910 American Underslung Traveler Toy Tonneau soared past high estimate to achieve a record $1,815,000.

Tonight's sale commences at 6pm PT and will stream live at www.rmsothebys.com providing real-time coverage of the event. Full results from RM's Monterey sale will be available online early next week.

*Results are listed in USD and are inclusive of 10 percent buyer's premium. Sales totals include post-auction private sales.