Mazda5 will officially die this year

Brandon Turkus
We knew it was coming, but it just became a lot more official. Mazda is going to kill the closest thing to a driver-oriented people-mover when it phases out the Mazda5 MPV for model year 2016.

The news was presented quietly and unremarkably, with Mazda giving its compact minivan a single-line obituary as part of an announcement recapping changes to the brand's lineup for 2016: "There are no plans at this time to bring a replacement Mazda5 to the US market beyond the 2015 model year."

Despite being a critical favorite for its fun-to-drive nature and seven-seat capacity, the 5 never really resonated with consumers, representing a small percentage of Mazda's total sales. In its best sales year, 2008, only about 22,000 were sold, representing only about eight percent of the brand's sales that year. That percentage was even smaller in recent years, as the 5's sales fell into the low ten-thousands.

In other Mazda news, the brand is making a number of small, subtle changes to its lineup. Almost all of them constitute new ore removed options and are available for your perusal in the attached press release. Scroll down for a look.
Show full PR text
2016 MAZDA LINEUP: WHAT'S NEW

Having launched two refreshed and two all-new models for the 2016 model year, Mazda North American Operations is keeping busy with broadening its award-winning lineup of cars and crossovers. For the 2016 model year, Mazda is keen to maintain its leadership in providing unmatched KODO—Soul of Motion design and excellent driving dynamics and democratizing advanced safety technologies like Mazda Radar Cruise Control and Smart Brake Support into even its smallest, most affordable vehicles.

Mazda6 and CX-5 return for 2016 with new styling elements, interior amenities and refinement. Mazda CX-3 enters the North American market in a new, hot segment, and MX-5 Miata continues its mission to provide unadulterated driving thrills to the masses. Last but not least, Mazda3 has been repackaged for 2016. Below is a list of what's new and different with Mazda's 2016 lineup.

There are no plans at this time to bring a replacement Mazda5 to the U.S. market beyond the 2015 model year.

All-new for 2016, Mazda MX-5 sheds approximately 150 pounds compared to the previous model, using Mazda's SKYACTIV Technology. The 2016 MX-5 comes powered exclusively by a 2.0-liter SKYACTIV-G engine in North America, which produces 155 horsepower at 6,000 RPM and 148 lb-ft of torque at 4,600 RPM. New features include:

The 2016 Mazda CX-3 is an all-new vehicle for Mazda and enters the quickly burgeoning subcompact CUV segment. CX-3 comes standard in North America with a 2.0-liter SKYACTIV-G engine, which produces 146 horsepower and 146 lb-ft of torque. It comes paired exclusively with a six-speed SKYACTIV-DRIVE automatic transmission and is available in front-wheel or predictive i-ACTIV all-wheel drive. Trim levels include Sport, Touring and Grand Touring. 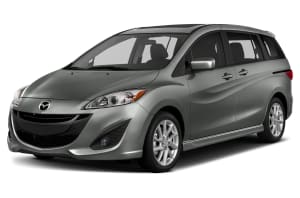