Looking at a new Porsche Boxster? First of all, we commend you on your choice, because in its latest iteration, the Boxster has sped out from under the shadow of the 911 and into its own. But now to choose: do you get the base model with 265 horsepower, the Boxster S with 315 hp, or the top-of-the-line Boxster GTS with 330 hp? It's a daunting question, considering the $10k+ price gap between each model that you could put into the gas-and-rubber jar. Same goes for the Cayman, albeit with ten more horses across the board. But as if that's not confusing enough, there appears to be another player on the field. (That is, at least, in certain European markets.) 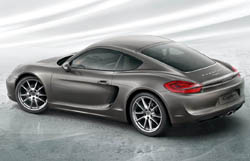 Appearing on the company's Belgian and Norwegian sites are the Boxster 211 and Cayman 211. As you might have guessed, they pack a less substantial 211 horsepower, undercutting what we know as the base models. Instead of using a smaller engine, though, the Boxster and Cayman 211 get the same 2.7-liter boxer six, just with less power.

As a result, they're a bit slower off the line: the Boxster 211 takes between 6.1 and 6.4 seconds to get to 62, depending on exact specifications, compared to the 5.5- to 5.8-second range for the 265-hp Boxster, while the Cayman 211 is quoted at 6.2 seconds versus the 275-hp Cayman's 5.4 to 5.7 seconds. Fuel consumption and emissions, on the other hand (and as you'd expect), are better in the 211. But while Porsche Norway charges around $10k less for the 211 models, Porsche Belgium charges the same for the 211 models as it does for the next most powerful versions (from which they appear to be visually indistinguishable).

We've sought confirmation from Porsche Cars North America, but given that the 211 models were likely created more to meet local government requirements than pure customer demand, we wouldn't expect these detuned versions to be offered Stateside anytime soon.