A Return To Form

View All Specs
Add a Review
Save for a few years of its century-plus existence, Cadillac has offered its unique brand of American elegance in two-door, fixed-roof bodystyles. Most of these cars were big, floaty barges, of course, though its most recent offering was the wedge-shaped CTS Coupe. But whereas the CTS Coupe was a statement car – angular and severe, with somewhat limited appeal except to design snobs and provocateurs – the ATS Coupe represents a return to form for Cadillac, with a proper three-box (engine-cabin-trunk) body and a slightly lower price point that should broaden its appeal among a larger swath of the market.

Generally speaking, the 2015 ATS Coupe is a two-door version of the sporty ATS Sedan, though, surprisingly, the only common exterior components are the hood, headlamps, and sundry trim pieces on the front fascia (which features a slightly larger grille, a wider lower air intake, and the redesigned, laurel-less Cadillac crest). Even the mirrors are different. The body stretches 0.8 inches in length and 1.4 inches in width, the roof is 1.1 inches lower and the rear windscreen slopes at a flatter, sleeker angle. Interestingly, the windowsills are actually quite a bit lower, further slimming the car.

Thanks to its 0.8-inch wider front and rear wheel tracks as well as more tumblehome in the C-pillar area, the coupe sits lower and looks more planted than the ATS sedan, particularly from the rear three-quarter view. Filling the wheel wells is a family of slick 18x8-inch wheels, with 18x9-inchers coming on the rear axle of performance models. Even if all those changes haven't resulted in a wholly new look the way the CTS Coupe departs from its sedan progeny, the ATS two-door is a truly beautiful car that looks considerably better on the road than on a show stand. And for that, Cadillac deserves mighty praise. 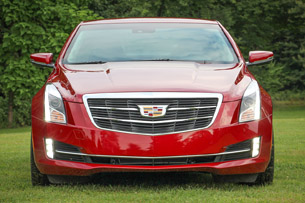 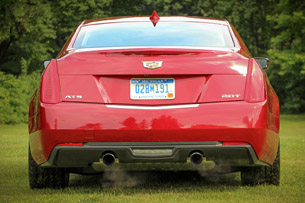 The ATS two-door is a truly beautiful car that looks considerably better on the road than on a show stand.

It is a proper coupe, of course, and as such is saddled with the expected limitations that accompany modern two-door packaging, notably rear seat access and limited rear headroom. Since the floorpan is common to both bodystyles, rear legroom is the same as the sedan's, though headroom shrinks a considerable 1.8 inches, making it hard for even average-sized adults to sit back there without their heads touching the window glass. Getting to the second row is made easier by a motorized front seat, though the seatbelts can trip passengers up during the egress process. Front occupants don't suffer at all, however, perched as they are in very comfortable and supportive chairs that are also mounted a bit lower to allow for adequate noggin space beneath the lower roof. This also facilitates nice sight lines for those in back, a development CTS Coupe owners would likely appreciate.

Once settled in, all passengers will find themselves in an elegant, glitzy space of the sort that only Cadillac can pull off. The mix of materials on the cut-and-sew dash and door panels is impressive, with genuine aluminum, carbon fiber and glossy or open-pore woods making appearances on the various trim levels. Semi-analine leather is an option that also brings fancy, faux-suede seatbacks. Constant improvements to Cadillac's CUE infotainment system still haven't completely exorcised its slow response times and infuriating propensity to collect fingerprints – would someone please tell Cadillac designers that piano black is not an acceptable material for touch points? – but it contains an incredible amount of functionality once you learn it all. And techno-geeks will love the available head-up display, the newly optional 4G LTE wireless hotspot connectivity and wireless charging for certain mobile devices (unfortunately, iPhones aren't among them). 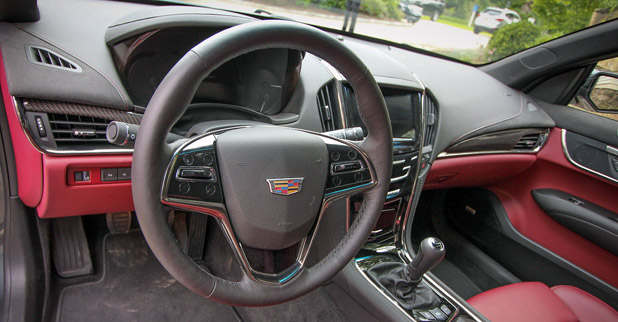 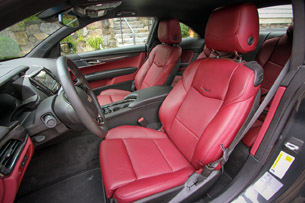 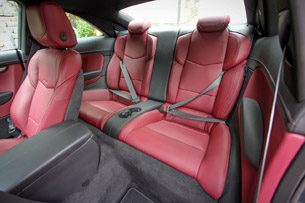 All passengers will find themselves in an elegant, glitzy space of the sort that only Cadillac can pull off.

The base engine for the ATS coupe is the sedan's optional direct-injection 2.0-liter four-cylinder turbo, which makes the same 272 horsepower at 5,500 rpm as before, but the engine has been goosed to a heady 295 pound-feet of torque at 3,000 rpm (up from 260 lb-ft of torque in the 2014 ATS 2.0T sedan). This gives the coupe model a considerable power-to-weight advantage over the segment's other four-bangers, with the base ATS Coupe weighing in at relatively light 3,411 pounds. The naturally aspirated 3.6-liter direct injection V6 remains set at 321 hp at 6,800 rpm and a relatively modest 276 lb-ft of torque at 4,800 revs, which renders it rather torque-deficient among the sweet sixes in the BMW 435i and the Audi S5. At 3,530 pounds, however, it still retains a slight weight advantage over the others. Six-speed manual and automatic transmissions are available for the same price, and the optional all-wheel drive system with its 45/55 front-to-rear torque distribution is available in two-pedal models. That's right, the ATS Coupe is no Sunbelt Special.

The newfound injection of torque for the four-pot places the 2.0T model's 0-60 acceleration estimates within 0.1 second of the six (5.6 seconds vs. 5.5 seconds), though as we found on the road, at least in automatic-transmission form, the V6 is still the more effortless performer. The four-cylinder is wonderfully smooth, but the V6 delivers more robust and predictable response to throttle inputs. In both engines, however, the six-speed automatic comes across as rather busy when pushed and rather too eager to upshift into higher gears, even in sport mode. And when summoning manual shifts via sexy polished shift paddles on the ATS' meaty, three-spoke steering wheel, shifts still lack the overt crispness that we remember from previous experiences with the ATS sedan. The sportiest powertrain combo, we found, is the 2.0T with its lovely Tremec six-speed manual transmission that features a progressive clutch, effortless shifts and well-placed pedals. 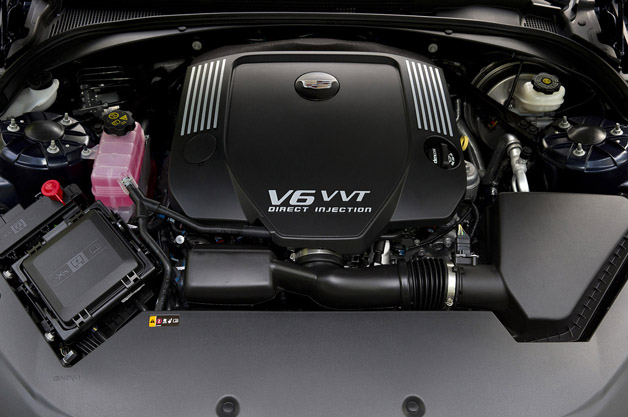 The four-cylinder is wonderfully smooth, but the V6 delivers more robust and predictable response to throttle inputs.

Dynamically, the ATS Coupe is neither soft nor scintillating. It benefits from a rock-solid body and a cabin that is utterly free of wind-noise at highway speeds, yet at the end of the day, we found it to be merely "very good" to drive. If that sounds like damning with faint praise, perhaps it is. This is Autoblog after all, and as enthusiasts, we expected the ATS Coupe to be a sharper-edged handler, especially given its slight weight advantage over its primary competitors. Numb on-center feel from the electric steering is the main culprit here, which gives way rather suddenly to quick bite once the wheel is turned more than, say, 15 degrees, but unfortunately, not much more feel accompanies the action. This was true whether we were cornering at a moderate pace or in high-speed, 85-mph sweepers, when variable assist systems like these are supposed to feel more direct.

When we jumped into an ATS Coupe fitted with the FE3 performance suspension that includes GM's nifty magnetic shocks, summer tires, even quicker steering and a limited-slip rear differential, we found that the ride was predictably smooth on straightaways but steering was not much more talkative as cornering loads built. We reached out to Cadillac for comment, since we've loved the ATS' handling in the past, and were told that any retuning was performed only to make the car feel more connected, not less. We will suspend final judgment, then, until we get the car in our hands for a more extended drive in a broader variety of circumstances. 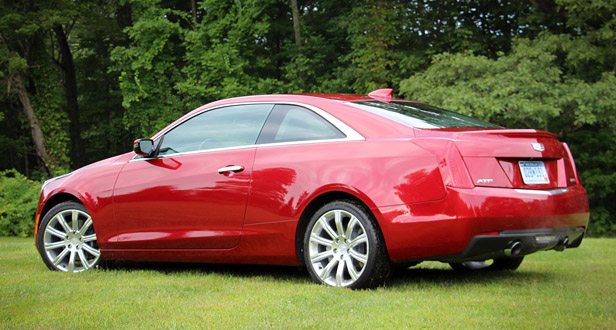 While the ATS is still no BMW 4-Series from a driving standpoint, we expect that most intenders will find a lot to like here.

The good news: even the base suspension offers outstanding grip whilst preserving a Cadillac-worthy ride. We were also thrilled with the Brembo brakes, standard on all models. Strong, linear, communicative and not too grabby, they are beautifully tuned for this kind of car.

The ATS coupe will be in customer driveways within the month, with base prices starting at $38,990 (including $995 destination) and rising to $52,430 for a 3.6-liter model with the Premium Collection package that includes the aforementioned FE3 performance goodies, navigation and a heads-up display. The priciest model we drove was a top-of-the-line 3.6 Premium with the $695 Track Performance package (upgraded brake linings and cooling system), the $3,035 Driver Assist package (adaptive cruise control, lane change, blind spot and rear cross-traffic alerts, and more), $850 polished aluminum wheels, a $600 cold weather package (heated front seats and steering wheel) and $1,295-worth of Kona brown leather upholstery, racking up a grand total of $57,795.

While the 2015 ATS Coupe is still no BMW 4-Series from a driving standpoint, we expect that most intenders will find a lot to like here. It's burgeoning with bold American style, splendid amenities and luxurious, high-tech comfort for two and an occasional "plus two." These are longstanding – and one might argue more important – attributes of Cadillac coupes throughout the company's long history. As such, the ATS coupe marks a welcome return to form. Now, bring on the ATS-V!