Sebastian Blanco
It may be small, but the 2013 Smart Fortwo ED recently managed to score four stars overall in new National Highway Traffic Safety Association tests. That score includes four stars in the Frontal Barrier Crash, four in the Rollover test and five in the Side Barrier test, showing that Daimler's Tridion Safety Cell technology manages to get top results, at least some of the time.

The NHTSA first tested the gas-powered Fortwo when it came to the US in 2008. The agency's tests were different then, but in some of them, the car got just three stars. It's not a direct comparison, but the ED did better overall, scoring lower than four stars in just one category, the Side Pole test. You can watch three videos of the crash tests below.

The Smart ED is now available for the low, low price of $139 a month if you lease. That price includes the Battery Assurance Plus plan, which guarantees that your new battery-powered car will not suffer capacity loss and also includes free annual battery maintenance. 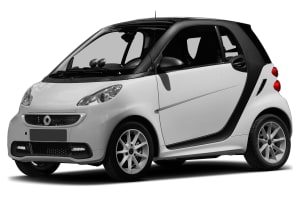