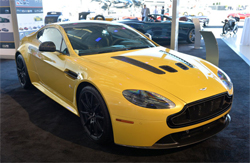 As one the featured automakers at this year's Pebble Beach Concours d'Elegance, Aston Martin had a pretty big spotlight with which to reveal two production vehicles to the North American market. The 2014 Aston Martin Vanquish Volante (shown above) made its global premiere in Monterey, while the 2015 Aston Martin V12 Vantage S (inset) made its debut on American soil.

The $297,995 2014 Vanquish Volante has the same sexy styling as its hardtop counterpart but provides a retractable soft top for open-air motoring, while the $184,995 2015 V12 Vantage is Aston Martin's fastest production car ever (excluding the One-77) with its top speed of 205 miles per hour and 0-60 time of just 3.7 seconds; both cars go on sale in the US early next year. Unveiled at the McCall's Motorworks Revival, both new Aston Martin models are joined by the equally stunning CC100 Speedster Concept.