Mercedes-Benz builds a beautiful GL-Class SUV with top-spec luxury amenities that is perfectly suited for the daily driving needs of a dad or a mom (68-percent dads, according to 2011 figures) and with what we can only believe is a very nice 362-horsepower V8 engine. What the company sent our way, however, was a heavily blinged, huge-wheeled, 429-horsepower pleasure wagon that is just as well-suited to creating babies as toting them around, should your amorous instincts be triggered by the pimp-level of your whip. The GL550 is the real deal, if the deal you're looking for involves carting kiddies and/or hauling ass. We really only had need of the latter during our one-week loan of the thing, sadly.

And so, while the GL and all seven of its seats is clearly designed for the needs of a family with children, we found ourselves slightly lacking in the kids department for the time of our test. (Your author is not a dad, though he does have a suite of corny jokes stashed away for when the time comes.) What we did have, what we always have, is a load of adult friends who like to be driven around in a big, "sweet" Benz.

In this case the adults numbered a total of six. A full four of them lived about 150 miles from our Metro Detroit base of operations, in the western corner of Michigan called St. Joseph. All of them were interested in finding a sucker buddy to drive them around on a tour of some local wineries. This would also prove an entertaining time to test the performance boasts of this remarkably rapid V8 sport ute, we thought. Plans were made, a weekend was selected and the GL550 showed up just in the nick of time for our fall tour.

The inherent impressiveness of a Mercedes is matched by the size, scale and design of this new GL.

The redesigned 2013 GL500 is a vehicle that is well suited to make a strong impression on folks of all kinds, whether they generally care about cars or not. For a start, there is still an undeniable cache associated with that Benz logo on the grille – something that is more easily sensed in the parts of Midwest America that don't see the three-pointed star quite so frequently. (The suburbs of Detroit don't flip for the big M-B quite so much as the sticks around St. Joseph, Michigan, for instance.) The inherent impressiveness of a Mercedes is matched by the size, scale and design of this new GL, which manages to look pretty rugged and refined at the same time. Those who know their off-roading stuff might laugh a little at the GL550's 21-inch five-spoke AMG wheels, but they really do give the SUV an impressive stance, and add quite a lot of overall gravitas to the vehicle. We actually think that the sharply creased bodylines Mercedes seems so fond of nowadays work a bit better when scaled up to GL size than they do on the smaller GLK. At any rate, the neighbors seemed to dig it.

(As for the off-roading, though we know the GL capable, we found about as much reason to test the capability as we'd expect most owners will on most days. There is a low-range, six terrain-based transmission settings and two locking differentials. Enough said?)

There were zero rear-seat entertainment screens in our $100,115 Mercedes-Benz GL550.

And the neighbors never even got to go inside, where, at least in the front two seats, nearly every luxury doodad known to humankind is available with the touch of a finger. Seriously, while there's not a lot of groundbreaking technology immediately evident from the driver's seat, the German company did see fit to stock our GL550 with most all of its existing party tricks: heated/cooled/massaging seats, adaptive cruise control, night vision, blind-spot monitoring and lane-keep monitoring, active and self-cleaning headlamps, a 360-degree view and backup camera with parking assist, a Harmon/Kardon surround sound audio system, something called "soft-closing" doors that we didn't even realize were there and so much more that it's as boring to list as we're sure it is to read.

Now, the four sots who had to suffer through our wine-touring extravaganza in the cheap seats (rows two and three) didn't have life quite so easy. Sure, there are some pleasantly leathered-up and heated chairs back there, and the third-row was accessible at the touch of a button, but there were zero TVs. Let us repeat that for effect: There were zero rear-seat entertainment screens in our $100,115 Mercedes-Benz GL550. Your author may not be a dad yet, but he knows enough about keeping the little people happy to understand that merely having two huge sunroofs in the rear quarters is not going to keep the rugrats at bay for long. It's not as if we at Autoblog stay up nights, pining for more in-car television. But at nearly $15,000 over the base price of the GL550, and with aging competitors like the Cadillac Escalade throwing screens around like Best Buy on Black Friday, their lack feels a little weak in this otherwise loaded-up vehicle.

While we're on the subject of disappointments here, the GL's trick fold-down second-row isn't quite so slick in practice as it would seem from the options list. Two of the members of our tour – both moms, for added credibility – initially loved the auto-folding second row; seeing how easy it made access to the way-back. However, putting the second row back up, as well as operating the headrests that self-stow in the automated process, proved pretty high-effort. Not a big deal for your big strong test driver who has use of both of his hands, but a pain in the rear for a parent one-arming a child, our similarly tied up while trying to get the show on the road.

Thankfully, with the backseat letdowns mentioned, the rest of the GL550 experience was, in a word, lovely. The twin-turbo V8 is a far cry from "nicely spirited" engines we've sampled in other large SUVs, and is actually right in range of some of the higher performance off-roaders we've tested. A whopping 516 pound-feet of torque is available at a low 1,800 rpm, which allows for this very large vehicle to make some very quick starts and passes. Mercedes estimates a 0-60 mile per hour sprint to take 5.5 seconds, which feels pretty conservative to us, honestly. The GL550 is fast enough that we're already wondering what kind of silliness will be in store when the AMG guys have their way with the SUV, sometime in the first quarter of 2013.

Everyone felt that riding around in a big Mercedes beat the hell out of doing it in a slow tour bus.

Most GL550 owners will learn to appreciate all that power when on the highway, we don't doubt, which is really where this brute feels the most at home. Considering the big wheel/tire package and that bluff front end, noise, vibration and harshness at freeway speeds are kept nicely in check. The GL may not ride with the same hushed interior as its S-Class cousin, but it does a passable impression, which is saying quite a lot. High-speed ride and handling are both first rate, too. The GL's combination of stability, nicely weighted steering, power and Benz's Distronic adaptive cruise, all come together to make this SUV a dead-simple way to crush hundreds of miles without pain. Our trip from Detroit to Lake Michigan was dispatched with such rapidity (and a pretty reasonable 17.5 miles per gallon according to the GL's economy computer) that we were almost surprised when we arrived. (Again – no kids.)

And what did our crew of rummy drunks think when they tumbled out of the GL550 after a day of wine tasting? (Don't worry, the driver stayed painfully sober.) With the previously stated complaints about access noted, the opinion, to a person, was that the GL was the bomb. Third-row occupants had plenty of room for their grownup legs and arms, no one complained of sore necks or stiff backs after the trip and everyone felt that riding around in a big Mercedes beat the hell out of doing it in a slow tour bus. Many bottles of wine were purchased and stowed neatly in the back, and a good time, frankly, was had by all.

Mercedes-Benz hasn't yet figured out the type of technology needed to turn your pouting toddler into a wine-sipping pal, but the truth is that no matter the age of the humans you're transporting, the job will be handled in style and comfort if a GL550 is your steed. Better yet, the driver won't go blind with boredom while piling up the miles. 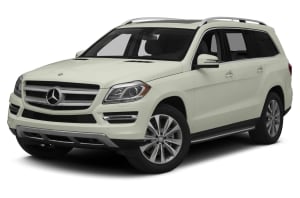