Suzuki Grand Vitara getting facelift for 2013 Yesterday Suzuki announced that a refreshed Japanese-market Suzuki Escudo will bow for 2013, sporting a new front fascia and wheels and dropping its rear spare tire carrier, among other tweaks. Suzuki's American PR staff has confirmed to Autoblog that we will be getting some of the updates here as well, in the form of a facelifted 2013 Suzuki Grand Vitara.

Suzuki tells us that an official announcement will be made later this month, but confirmed that the Grand Vitara will be indeed be offered in a model sans external spare tire and extra side mirror. The updated look seems designed to make the long-in-the-tooth Grand Vitara seem more of a crossover than traditional SUV, though we assume Suzuki isn't ditching the transfer case and low-range gearing that sets it apart from the cute ute set.

Japanese customers will also get a special X-Adventure edition of the Escudo, which packages features like a sunroof, stability control, 18-inch wheels, and an interior with contrasting red stitching on the suede-look seats and leather-wrapped wheel and gearshift.

Check out our gallery of the JDM Escudo to see a preview of our 2013 Grand Vitara. 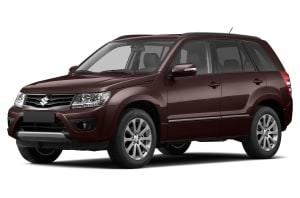