Saint-Tropez is a charming town in southeastern France nestled along the Mediterranean Sea. Internationally recognized as a summer playground for the wealthy and famous, it is also famed for its "clothing optional" beaches where more than just noses and shoulders get burned in hot weather. While still a couple months shy of warm weather and the influx of tourists, Mercedes-Benz chose to get an early start on the topless party by flying us to the Côte d'Azur for some seat time in its newest high-performance droptop, the 2013 SL63 AMG Roadster.

Our first taste of the new SL-Class was behind the wheel of the standard SL550 in Spain less than two months ago. The two-seater impressed us with its stout chassis, strong engine and lavish appointments - but it failed to stir our emotions. The base SL long ago steered away from being a driver's car, and its latest incarnation proved no different. It was, in effect, just a very capable and posh GT.

But the SL63 AMG, boasting upwards of 557 horsepower thanks to a burly twin-turbocharged V8, still seems promising. Its luxury appointments are nearly identical, yet it wears AMG attire and its entire powertrain has been upgraded to appease warm-blooded automotive enthusiasts. Do fresh duds and a new muscular system make a more compelling athlete? We roughed in the French Riviera to find out.

An aluminum unibody cuts nearly 250 pounds from the curb weight of the convertible.

First introduced in the 1950s, the Mercedes-Benz SL-Class (designated "Sport Leicht," or "Sport Lightweight" in English) entered its sixth-generation with the introduction of the R231 at the Detroit Auto Show this past January. Aside from its polarizing appearance, the big story was its lightweight aluminum unibody – all previous models were constructed of steel. The corrosion-resistant alloy is one of today's primary weapons of choice when battling mass. And, according to the automaker, its use cuts nearly 250 pounds from the curb weight of the convertible without compromising structural rigidity or safety.

Special cosmetics and appointments are appreciated, but the real game changer remains the superb AMG powertrain.

To visually differentiate the SL63 AMG from its lesser brethren at more than ten yards, Mercedes has fitted it with an AMG body kit. The front fascia gains a larger air dam, unique LED daytime running lamps and an AMG radiator grille features double louvers in silver chrome. On each side are unique sill panels and "V8 BITURBO" scripting on the vent gills. The rear of the bodywork sports a silver AMG lower diffuser, quad exhaust pipes, a small spoiler on the rear decklid and AMG badges on the right side. While still falling short of the inherent attractiveness of the outgoing R230 generation, the new suit tailored by AMG strikes us as a big step in the right direction.

Gone is the naturally-aspirated 6.2-liter M156 V8 that powered its predecessor. In its place is the new twin-turbocharged 5.5-liter M157 V8, delivering more power (530 horsepower at 5,500 rpm, up from 518 at 6,800 rpm) and torque (590 pound-feet at 2,000 rpm, up from 465 pound-feet at 5,200 rpm) than the outgoing mill. As an added bonus, the direct-injected V8 is more fuel efficient and environmentally cleaner than the outgoing powerplant. Sending the power to the rear wheels is a seven-speed multi-clutch automatic with AMG Speedshift Plus technology and steering wheel-mounted paddle shifters for manual control.

In standard configuration, the SL63 AMG will crack 60 mph in 4.2 seconds and storm on to an electronically limited top speed of 155 mph. Opt for the optional AMG Performance Package, as was our test vehicle, and maximum engine boost increases from 14.2 psi to 18.5 psi. Power jumps to 557 horsepower and torque is a driveshaft-wrenching 664 pound-feet. With the upgrade, 60 mph falls in 4.1 seconds and top speed is electronically limited to 186 mph (Mercedes says it will top 200 mph if completely unleashed),

As mentioned, the base price of the 2013 Mercedes-Benz SL63 AMG stands at $146,695 (a figure which includes $895 destination). But the $35,000 premium over the standard SL550 doesn't just buy an engine swap and additional standard equipment. There are many options, and some of them are targeted just at the enthusiast.

With the exception of a throaty voice, the SL63 AMG is a perfect gentleman.

Thankfully, that solid college fund buys one fabulous two-seat hardtop convertible. We dropped into the supportive bucket seats, adjusted the lower lumbar, turned on the heated cushions, initiated the massage function and cranked up the Air Scarf to blow warm air on our nape. We cruised the streets of Saint Tropez, spoiled like emperors, and the beast beneath the hood pleasantly obliged. We drove placidly down the coast, tranquilly through the countryside and serenely into the mountains. With the exception of a throaty voice, the SL63 AMG was a perfect gentleman, acting completely content.

The turbocharged low-end torque is a godsend when launching off the line or mid-corner.

Rather than spending the next several paragraphs describing how driving in an SL63 AMG may be more relaxing than lying down on a chaise lounge in your shrink's office (when driven passively, it genuinely is), we will focus on several AMG-specific traits that were burned into our memory while in France.

First, the SL63 AMG is a better sports car with the bi-turbo V8. Of course we all miss the completely intoxicating sound of the naturally aspirated 6.2-liter predecessor, but in this 4,059-pound chassis, the turbocharged low-end torque is a godsend when launching off the line or mid-corner, when power is needed for weight transfer. Experience has taught us that turbocharged engines typically lose some of their raspy bark, as the blower plugs the exhaust flow. Not in this case, as the engineers have tuned the quad exhaust masterfully. It burbles, cackles, growls and howls at all the right times, lending audible credibility to the power delivery. Mercedes tells us that the AMG's exhaust note is one of its strongest selling points – not the performance. As ridiculous as that sounds, we can only agree.

It would be interesting to watch the SL63 AMG run with a nimble Porsche Carrera S, as it certainly feels capable of doing so.

Second, the SL63 AMG is damn fast. Forget the "official numbers" from Mercedes-Benz, as the SL63 AMG with the AMG Performance package feels like it will bust 60 mph in less than four seconds without breaking a sweat. The two-seater pounces off the line like a leopard in pursuit of a gazelle with its SpeedShift MCT cracking off effortless shifts. Forget the shift paddles and let transmission do its work, as the gearbox in "S+" mode is smarter, quicker and smoother than almost any human will ever be.

Third, the SL63 AMG challenges physics. This big two-seater weighs more than two tons and has massive road presence. But in defiance of educated logic, it feels as agile as something half its size. Not only does the AMG come with more negative camber from the factory, but it features an AMG sport suspension with active roll management. Body roll is minimal and cornering grip is impressive on the standard Michelin Pilot Sport tires (stock 19-inch wheels wear 255/35R19 tires up front and 285/30R19 in the rear). Braking was also a strong suit, with good pedal feedback and plenty of capacity, even without the optional carbon-ceramics. It would be interesting to watch the SL63 AMG run with a nimble Porsche Carrera S, as it certainly feels capable of doing so.

Lastly, and perhaps most importantly, the SL63 AMG has regained the character that we felt was missing in the SL550. As expected, both driver and passenger are well isolated from the elements and annoyances of road noise and unnecessary vibrations and harshness. But the AMG tuning has sharpened the primary inputs (throttle, steering and braking) to again engage the driver. From behind the wheel, the SL63 feels sporty, muscular and athletic, never sloppy or soulless.


It uncompromisingly coddles like an SL550, but also has the badass disposition of an SLS.

Despite our fondness for the SL63 AMG, we still found a few annoyances. The AMG Performance package should be standard equipment (not an additional $9,000 for what amounts to a software upgrade, a limited slip differential lock and some red paint on the calipers), the Pre-Safe Brake system (part of the optional Distronic Plus radar-based cruise control) is far too sensitive in spirited driving and the electro-mechanical AMG speed-sensitive sport steering lacks tactile feedback (a complaint we also lodged against the SL550). Yet none of these are deal breakers, especially to the average customer who earns a $550,000 annual household income.

The uninformed will attempt to dismiss the SL63 AMG as an overpriced, high-performance derivative of the SL550 with a harsher ride and adverse temperament, but that assumption is only partly correct. Yes, it is expensive. But the real hidden gem, emerging only after time behind the wheel, is that the SL63 has a split personality. It uncompromisingly coddles and pampers like an SL550, but it also has the badass disposition and composure of an SLS. Through wizardry, magic and simply brilliant engineering, Mercedes-Benz has crafted an uncompromising GT roadster for the enthusiast. 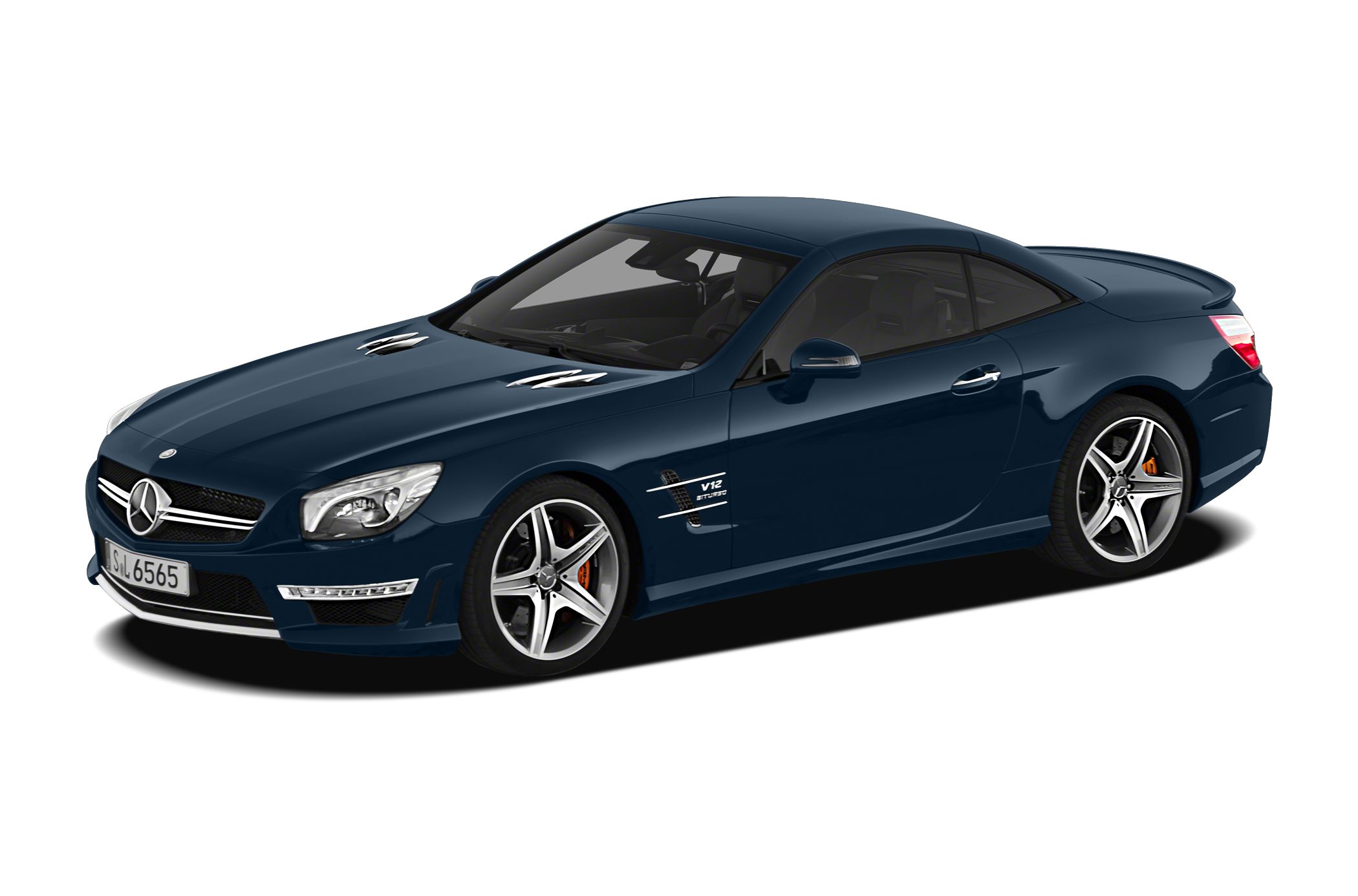