iQ will be Scion's focus at SEMA Scion is headed to SEMA 2011 with a total of seven concept cars tuned by some of the most creative customizers around. Cartel, Dynamic, 686, Michael Chang, Jon Sibal and Tatsu have all turned their attentions toward the automaker's lineup, and the results are as varied as the shops that built them. The newest addition to the Scion stable, the tiny iQ, looks to have received most of the attention this year around, with a total of four iQ concepts headed to the sands of Las Vegas. One of the wildest has to be the iQ Pit Boss by Cartel.

Designed to be a fully functional paddock worker, the iQ Pit Boss boasts complete controls via a Apple iPad, a wireless hot spot, storage for wheels and tires, multiple charging stations and one very impressive stereo for the after-podium celebration.

Michael Chang also took a motorsports approach with his iQ-RS. With custom fender flares, serious aero work and wide tires, this iQ looks built for bouncing its way around a road course. But not every iQ in attendance is merely built to look the part. The Tatsu iQ-MR moves the engine to the middle of the chassis and ditches front wheel drive for rear-wheel glory. New cams, higher compression pistons and an AEM engine management tune all help give the car a little extra pep, too. 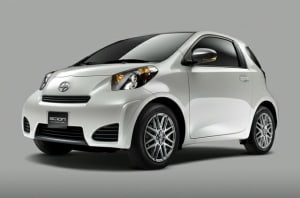