Despite being big in Canada, Toyota Matrix future unsure

Toyota may not invest in a next-generation version of the company's Matrix when the 2013 Corolla arrives. According to Ward's Auto, the hatchback's sales have fallen off of a cliff, with just 14,592 deliveries last year. That's down from a height of 66,836 units in 2002. But that's just here in the typically hatch-averse United States. In Canada, the Matrix is still kicking in teeth, though the Corolla still outsells its long-roof twin by more than twice the volume.

While there's been some speculation that the upcoming compact Prius variant will supplant the Matrix in the Toyota family tree, Bob Carter, Toyota's Group Vice President and General Manager, says that the two vehicles are expected to appeal to vastly different audiences.

Still, we have to think that Toyota would be wise to invest a little coin in the aging Matrix when the Corolla gets a revamp in a few years. American buyers seem to be slowly warming to the idea of hatches and wagons, and competitors from Hyundai to Ford are all offering five-door variants. As Ward's Auto points out, 43 percent of 2012 Focus sales have been hatchbacks to date. 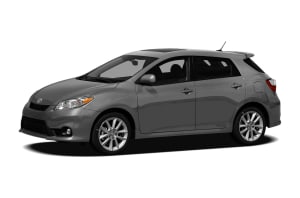