How to bring a bazooka to an off-road knife fight.

Driving a Ram 2500 Power Wagon on a dirt road is like bringing a Bazooka to a knife fight. It's hard to imagine an ultimate bug-out rig with a more desirable spec sheet, yet while navigating dusty former mining roads in central Arizona we discovered that this massive truck is as compromised as it is capable.

Some background: Ram, previously known as Dodge, resurrected the commercial and military-oriented Power Wagon nameplate more than a decade ago as a lifted and ruggedized version of the 2500 three-quarter-ton pickup. The recipe has mostly remained the same since, although the Power Wagon has received the same worthwhile updates that have made the entire Ram lineup so impressive.

The Power Wagon takes a vastly different approach to off-roading than the Ford F-150 Raptor. Where the Ford was designed to leap over sidewinders in the California desert, the Ram seems to have been envisioned to conquer damn near anything. It rides on bulky off-road rubber and sports a standard winch dangling out of its front bumper.

Let's take a look at how the Power Wagon lives up to its name. 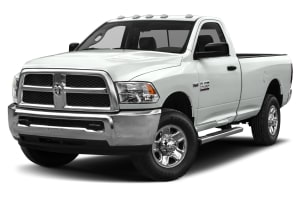 Ram offers the Power Wagon in three trim levels: basic Tradesman (think vinyl flooring), mid-level SLT, and range-topping Laramie. But even the Tradesman Power Wagon is nearly $50,000 with a couple of options added. The rigs we drove deep into still-active mining country in the Bradshaw Mountains were SLTs with a few goodies that put them just shy of $60,000. They weren't lavishly equipped with their cloth bench seats and so-so stereos, but there was little missing.

We drove 2016 models with big and downright gaudy decals. PR folks at Ram admitted to us that the automaker's bean counters didn't want to spend much to market the truck. Instead, they decided to let the graphics get the job done.

Thankfully, Ram is updating the Power Wagon's look for 2017 with a new front fascia cribbed from the Ram 1500 Rebel (basically a slightly more off-road-oriented Ram 1500) and optional heritage-inspired decals.

Take up the entire trail.

If you think a Jeep Wrangler Unlimited stretches the limits of size for an off-roader, you've never been behind the wheel of a Power Wagon. The Power Wagon stretches more than 237 inches from stem to stern and it is almost 80 inches wide. It's more than six feet longer than a two-door Jeep Wrangler, which means you must pick your trail carefully.

When we set off from suburban Phoenix, our Power Wagons were shiny and new. By the time we made it to Crown King, they had been unavoidably pinstriped. If you live where trails are tight, this is not the rig for you.

It's all about the winch.

Some trivia: The Ram 2500 Power Wagon is the only new truck you can buy from the factory with a winch. But putting that winch there wasn't as simple as you might think.

On paper, the winch is like any other Warn 12,000-pound unit. But we talked with someone from Warn who said that the Power Wagon's winch isn't simply one plucked from the company's vast catalog. Instead, it is built specially for Ram and it has its own part number. Its drum actually rotates in the opposite direction of Warn's off-the-shelf units to fit this application, and it has its own special mounting design integrated into the Power Wagon's front bumper.

Not only that, but Ram had to crash test the winch-equipped Power Wagon in order to certify it for sale in the United States. That's one of the main reasons you won't see a winch bolted to any other SUV or pickup here—crash testing isn't cheap or easy.

We didn't need to use the Power Wagon's winch during our testing, but it was nice to know it was there.

Down on all fours.

The trail to Crown King was littered with boulders and short climbs, all of which tested the Power Wagon's ability to keep its tires in contact with the ground. The only time it didn't was when we forgot to watch the spotter.

Aside from a handful of exceptions, today's off-roaders gleefully lift a wheel or two when climbing an obstacle. That's because vehicles like the Jeep Cherokee and the Land Rover Range Rover utilize fully independent suspensions. They overcome what would otherwise be a tragic loss of rubber on dirt by utilizing high-tech traction control systems to transfer power to where it is needed.

The Power Wagon, however, needs none of this. Yes, there's a simple traction control system on board, but old-school solid axles and a trick disconnecting front sway bar help keep all four wheels firmly planted.

A couple of years ago, Ram ditched leaf springs for its 2500-series trucks, which gives them an especially well-controlled ride on-road while retaining the predictable articulation of a solid front and rear axle setup over rutted terrain. Ram engineers must have taken their Jeep colleagues out for happy hour and managed to nab the front axle sway bar disconnect system from the Wrangler Rubicon. At the press of a button, the front axle's sway bar unhooks to allow for additional wheel droop and compression.

One item from the Ram options list not included on the Power Wagon is an air suspension. FCA skipped it here not so much to keep the price down but because air suspensions actually reduce wheel travel when they are at their maximum height.

In a big truck like the Power Wagon, locking differentials are especially useful to keep the momentum needed to propel all that weight up a tricky obstacle.

One of the first features an off-roader usually adds to his or her personal rig is a locking differential. In the case of the Power Wagon, Ram has done the work for you. Twist a knob on the truck's dash and the rear locker engages. One more turn and the front is locked up.

There's no doubt that lockers work. We put them to the test after watching a rear wheel spin in vain while it tried to push the hefty 7,000-pound truck up a rock shelf. With the locker engaged, the Power Wagon simply walked up without a sweat.

Tires with big, chunky blocks are an off-roader's dream and an NVH – that's noise, vibration, and harshness – engineer's nightmare. In the case of the Power Wagon, they're Goodyear Wrangler DuraTracs in 285/70-17 dimensions. That's almost a 33-inch tire, a benchmark size for off-roaders. And we're sure FCA could have gone bigger given the size of the Power Wagon's wheel wells.

Like any off-roader, the Power Wagon is the sum of its parts, and it is the tires that make the most impact of all. We had no problem leaving the truck in two-wheel drive for much of the time since we knew we could rely on the DuraTracs' aggressive tread pattern to maintain grip on loose surfaces. They're a massive improvement over the mule-drawn wagon wheels that miners crawled over these hills with, that's for sure.

Our hats are off to FCA for fitting both the Power Wagon and the Wrangler Rubicon with tires that would scare off any other automaker (cough, cough Toyota).

When in doubt, throttle out.

Let's get this out of the way: The Ram 2500 Power Wagon would make a lot of sense with a Cummins diesel under its hood. Off-roaders would benefit from its instant torque and improved fuel economy. Instead, the Power Wagon gets a thirsty 6.4-liter gas V8. We asked why the Power Wagon goes gas-only: the answer is weight. The Cummins weighs hundreds of pounds more than the Hemi, which isn't helpful off-road when you're already dealing with a tank of a truck that will sink into mud or sand.

Still, the 6.4-liter V8 is plenty powerful on its own with 410 horsepower and 429 pound-feet of torque on tap. If all else fails, mashing the skinny pedal will free the Power Wagon from anything short of a deep bog (which we did not encounter in Arizona). Mated exclusively to a six-speed automatic gearbox, the 6.4 (which is related to the 6.4-liter SRT engine found in non-Hellcat Chargers and Challengers) delivers stellar thrust on the highway. Even over mountain passes on Interstate 17 between Phoenix and Flagstaff, the hefty Power Wagon had no problem keeping up. And, like its muscle car stablemates, that thrust is accompanied by a proper growl.

Brute force over all terrain.

You don't buy a Power Wagon for its subtlety. Hell, you don't buy any Ram for the way it blends into the crowd. It's the same story off-road, where this big truck can be coaxed into slinking down a trail when it would rather simply plow over whatever is in its way.

For exploring the back country that lurks just outside your house, the Power Wagon is undoubtedly overkill. We left our evaluation impressed with the big bruiser's capability and its relative refinement, but ultimately we yearned for something more nimble. Luckily for FCA, that exists in the form of the Jeep Wrangler, which is set to spawn a pickup in the next generation.

What we'd like to see is a Power Wagon version of the more nimble, lighter, and slightly smaller Ram 1500. Imagine shedding 1,500 pounds, $10,000, and almost a foot of length from the 2500 Power Wagon. That'd leave a powerful impression, wouldn't it?