Half the price of the average new car, but way more than twice as fun

"Honey, need anything from the supermarket?" I ask my wife, because ... well, she can always use a little help, right? "But it's 10:30 pm," she answers, with more than a hint of suspicion in her voice. We both know what this was all about: 2019 Ducati Hypermotard 950 SP in the driveway. The kicker? This extreme dirtbike-inspired machine has an MSRP of only $16,695 — just less than half the average new car price in the United States.

The Hypermotard was introduced in 2005, and the latest "Hyper" introduces several key improvements including friendlier ergonomics with wider handlebars, and trimmed mass thanks to a new variable diameter frame, new wheels and new suspension hardware.

Weight is an especially critical factor in motorcycle design. Though the base model is only 8.8 pounds lighter than before, that reflects a not-insignificant 2% of its total 440-pound curb weight. Also aiding performance is where the weight is lost: right where it counts, on unsprung elements that help the bike change direction more easily. The engine produces more power, 114 horsepower at 9,000 rpm, and greater torque, 71 pound-feet, of which 80% is available at 3,000 rpm.

Why does a sub-$18,000 motorcycle stoke more excitement than a sports car costing several times more? For starters, there's the setup: when you throw a leg over a sportbike, your legs are literally straddling an energy dense powertrain that propels a machine with nearly double the power-to-weight ratio of an average supercar. You can literally feel the effects of the compact, 937cc L-twin engine's reciprocating mass between your thighs as it moves through a combustion cycle, driving six straight-cut gears towards a rear tire with a contact patch roughly the size of a postage stamp. It's no wonder the Hyper gets serious electronic hardware to manage its safety systems: roll, yaw, and pitch angles are constantly in check by six-axis Bosch system, able to modulate power delivery and ABS thresholds based on constant high-speed calculations. 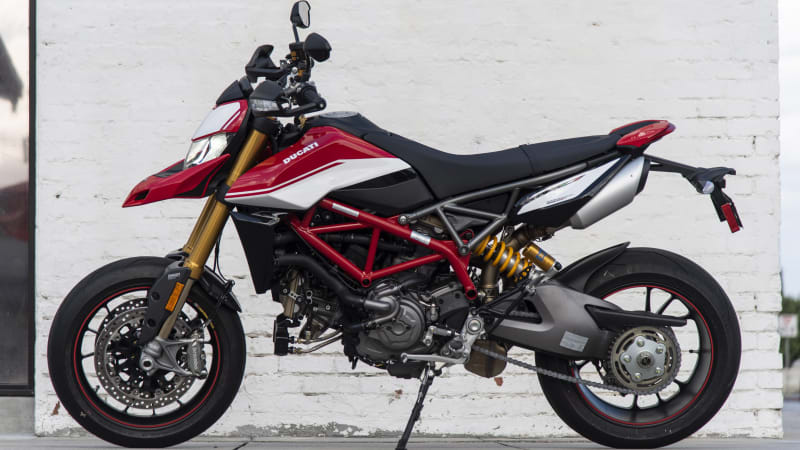 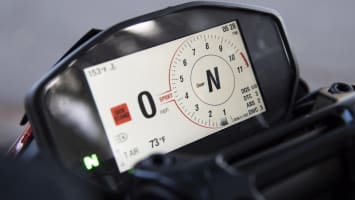 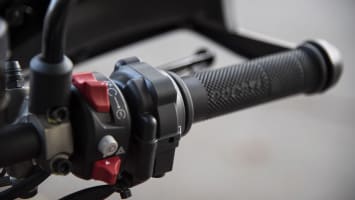 You'll want to take a moment to figure out your custom settings before hitting the road, via the color-intensive 4.3-inch TFT screen. Preset riding modes (Urban, Touring and Sport) can be selected while the motorcycle is in motion by switches on the left grip, as long as the throttle is closed. To fine-tune those settings, pull over and navigate through the menu, adjusting variables like traction control, wheelie control, and ABS that includes a slide-by-brake mode that enables exactly what you think it does.

Hopping aboard the Ducati Hypermotard SP requires a bit of a climb. The premium model is equipped with Öhlins suspension with 0.6 inches more front travel, for a total of 7.3 inches. An inch is added at the rear, for a total of 6.9 inches of suspension movement. The 35-inch seat height is a bit tall if you're short of inseam, though getting onto the bike and staying in control is easier than you think because the relatively short kickstand brings the altitude down and the saddle is sculpted to make it easier for your feet to reach the ground. 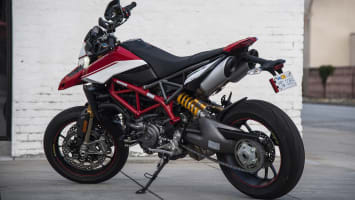 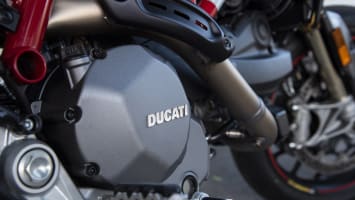 There's a remarkably direct relationship between rider input and motorcycle behavior, and it's all accentuated by the raw rasp of the Italian twin-cylinder engine, a tempestuous mechanical thing that emits a punchy bark urging you to wind it up. It initially takes some getting used to because the clutch, now requiring less effort thanks to its new hydraulic setup, engages over a relatively short span of lever travel. Because it takes a few hundred rpm off idle for the engine power to ramp up, it takes a somewhat healthy twist of the throttle to keep from stalling during aggressive launches. Learn the balance between clutch and gas, and it becomes easy to launch hard. Once in gear, it's easy to see why fiddling with the settings before takeoff is a good idea: crank the throttle, and the nose just wants to lift in a glorious, law enforcement-attracting wheelie. Jerk the gas with the engine set to full power mode, and you can get the front wheel to elevate briefly before the electronics taper down the elevation.

Aiding the effort is Ducati Quick Shift, or DQS, which enables clutchless cog swaps, either up or down. Standard on the SP and optional on the base model, the system works well if the shifter is stabbed hard. Tap it lightly at lower rpms, and there can be a momentary pause in power delivery. The system, like the bike, works best when it's triggered deliberately, with intention. Nail the shifter at high rpms, and you'll feel like Rossi barreling down the straight at Mugello – if you don't, you might want to check your pulse.

There's a reassuring, almost imperceptible smoothness to how the Ducati's electronics safety systems step in, and if you're skeptical of the aids, you owe it to yourself to give them a try. Having a safety net is never a 100% sure thing, but it goes a long way towards bolstering confidence when feeling out the bike's performance envelope. Equipped with sticky Pirelli Diablo Supercorsa SP rubber, the top model's suspension and lightweight Marchesini wheels work together to strike a strong balance between bump absorption and control. The four-piston front Brembo brakes offer excellent feel, and are strong enough to compress the forks quite a bit if you ride with them calibrated to lower compression settings. 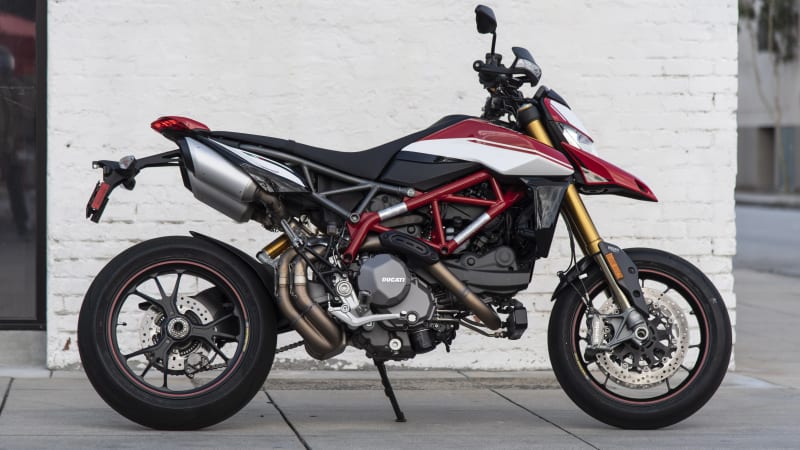 City riding is where dirtbike roots come in handy: unlike a stiffly sprung sportbike, rolling through a pothole doesn't affect dynamics nearly as dramatically. That imperturbability, coupled with its slim physical profile and fantastically charismatic engine, makes the Hypermotard a wildly entertaining motorcycle to ride through urban landscapes, especially in areas like California where lane splitting is legal.

The Hypermotard embodies an element of badassery that beckons you for a late night ride for absolutely no practical reason whatsoever. Not to put too fine a point on it, but the dreaded "hooligan" label might be more apt here, describing a motorcycle that incites you to do naughty things like wheelies, stoppies and things you really ought not — even if it's slightly beyond your skillset. Though there's some mighty intimidating sound and fury coming from the twin aluminum tailpipes, exploring this Hypermotard's capabilities is a rewarding, exciting endeavor. Whereas the older generations were edgy to the point of intimidation, with a tendency to turn in so responsively that they demanded loads of attention at highway speeds, the new bike retains a level of stability that encourages bold moves you might not otherwise try.

Sometimes that feeling can transcend the performance aspect of riding, encouraging you to do things like leaving the comfort of your sofa and saddling up for a late-night ride. If you have the means — and an accommodating significant other — it's an experience I highly recommend.