First Toyota to come with Apple CarPlay and adaptive suspension The 2019 Toyota Avalon revealed here at the Detroit Auto Show deserves to be called "flagship." Not only does it move forward this longtime benchmark of the full-size sedan segment, it also showcases a number of firsts for the Toyota brand as a whole.

Let's get to those firsts first. Standard is the Entune 3.0 Plus infotainment system currently available on the 2018 Camry, which includes a 9-inch capacitive touchscreen, a variety of smartphone connection apps and a Scout GPS navigation app. However, the Avalon goes further with standard Apple CarPlay, making it the first Toyota or Lexus to be available with this increasingly ubiquitous feature. It's about freaking time, but you'll note that Android Auto is still absent.

Also included is a wireless smartphone charger and five USB ports, while the new three-year subscription to Remote Connect allows you to lock/unlock the doors, check your fuel level or even start the engine using a smartwatch or Amazon Alexa. A 2G Wi-Fi connection is also included along with Safety Connect and Service connect remote services.

Other Toyota firsts include available adaptive LED cornering lamps and sequential rear turn signals, while an adaptive variable suspension comes standard on the sportier, somewhat oxymoronically named Touring trim. Besides automatically adjusting the dampers based on current conditions, it is also altered by the Touring's exclusive array of drive modes: Eco, Normal, Sport, Sport+ and Custom. All other 2019 Avalon trims just get Eco, Normal and Sport, which change the usual elements of steering, throttle and transmission. All Avalons also get a new multi-link rear suspension with thicker stabilizer bars and spring rates for improved handling. 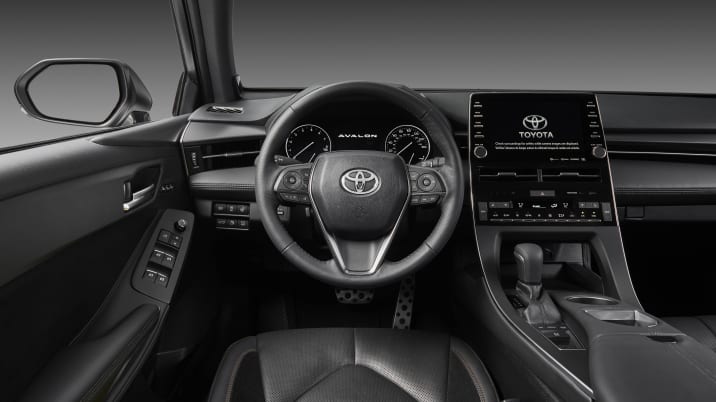 Additional sound-deadening materials and door seals promise to make the 2019 Avalon the quietest yet, though the Touring's special "intake sound generator," "engine sound enhancement" and active noise control (other Avalon firsts) should counter that a bit for those who'd actually like to hear something in their full-size sedan. Well, at least the exciting stuff.

New safety technologies include a rear cross-traffic emergency braking system, a panoramic parking camera with an alert function, and something known as "intelligent clearance sonar" that Toyota didn't really elaborate on. These are all options on top of the expansive standard array of safety tech and driver aids that includes full-speed adaptive cruise control, forward collision warning with automatic braking and pedestrian detection, lane-keeping assist, and blind-spot and rear cross-traffic warning systems. The latter two items were previously optional — and all of it is optional on the Avalon's competitors.

Now, the less-than-first stuff. Underpinning the 2019 Toyota Avalon is the same TNGA platform found in the Camry, Prius, C-HR and most future Toyotas (plus presumably the Avalon's Lexus ES cousin). And like the Camry's recent transformation, the 2019 Avalon is longer, wider and lower than the car it replaces. That grants it greater interior room, a lower center of gravity, and as the pictures can also attest, a generally sleeker profile. Overhangs have also been trimmed and the track widened. Altogether, it seems like a safe bet that the new Avalon should be a more dynamic car to drive, much like the 2018 Camry is.

Powertrains are also shared with the Camry. Toyota didn't release specs for the 3.5-liter V6, but one would assume it'll produce the same 301 horsepower and 267 pound-feet of torque. That should place the Avalon among the class-quickest full-size sedans (Scat Packs and Hellcats aside). The V6 is paired to front-wheel drive and an equally new eight-speed automatic.

The 2019 Toyota Avalon Hybrid gets the same 2.5-liter four-cylinder with its multitude of gas-saving tricks paired to a pair of electric motors and the nickel-metal hydride battery pack that's been relocated to under the back seat. Fuel economy wasn't announced, but as a point of reference, the 2018 Camry Hybrid XLE achieves 46 mpg combined (44 mpg city/47 mpg highway).

Look for more details as we get a closer look at the 2019 Avalon here at the Detroit Auto Show and in the coming months as further specs and information is released.