Steelers coach gives own Mercedes to cafeteria cook for $20

Chris Shunk
We'd be lying if we told you that we never fantasized about a generous donor arriving and delivering us one of our dream vehicles. It's not a realistic fantasy, but that doesn't mean it can never come true.

Just such a scenario took place in the real world, as Yahoo! reports that Pittsburgh Steelers cafeteria worker Maurice Matthews received the gift of a 1999 Mercedes-Benz SL500. The gift was given by Steelers secondary coach Ray Horton to Matthews for $20 on the coach's last day of work.

Horton dropped the news on Matthews by asking the food service employee, who would repeatedly ask to take his Benz for a ride, if he could borrow all the money he had. Since the two were reportedly close, Matthews gave Horton his only $20, which became the asking price for the droptop. Not too shabby, especially considering the book value on the 64,000 mile Benz is somewhere around $18k. 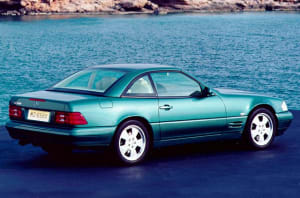