Northern California is an odd place – and that's just the cars. For every Toyota Prius-driving eco-yuppie, you'll find a diehard Datsun 510 enthusiast. And you can't toss a bushel of puntarelle without hitting a grease-powered Mercedes-Benz in the East Bay. But here's a better case in point: A few weeks back, I was driving an arrest-me-red Chevrolet Camaro SS Convertible and it barely turned a head. One week later, there was a Mercedes-Benz E350 Bluetec parked in my driveway and I couldn't stop fielding questions.

So when I snagged the keys to a 2012 Fiat 500C, I wasn't sure how it would be received by the mismatched masses of the Bay Area. Less than 10 miles later, I lost count of the number of thumbs-up and double-takes I got while crossing the San Mateo Bridge. Surprising? Not really.

After all, this is the coast that seared the original Volkswagen Beetle into the national consciousness and took to budget compacts years before Detroit had a clue. But while we've driven the 500 in all its guises, one question remained: Could you really live with something this damned cute?

If you're looking for something with some visual panache for around $20,000, your options are decidedly limited. The 500's obvious competition would be Mini, but a base Cooper starts at $20,100, with the droptop commanding $5K more. Honda Fit? Pedestrian. Smart ForTwo? Please. Mazda2? Fun, but lacking curb appeal. Nissan Juke? Polarizing. All of which puts the 500C in an odd middle ground. It's not a budget city car and it's not a premium subcompact. But it's a good niche to cater to.

While 500 pricing starts at $15,500 plus $500 destination, the C comes in $4,000 more at $19,500. Our Pop-spec tester with a five-speed manual carried a sticker of $21,750, and the only car we could secure for a photo shoot was a loaded Lounge model with six-speed automatic that cleared $24K. Not bad, but that $4K tariff basically means the power canvas roof accounts for more than 25 percent of a hardtop 500's base price, and that seems rather stiff. Either way, there aren't many options to choose from – particularly if you want to retain the manual 'box, which is only available on the less expensive Pop model.

With the standard C-spec goodies (Customer Preferred Package 21A) bringing Blue&Me hands-free connectivity and a pair of awkwardly positioned stereo controls behind the leather wrapped steering wheel, the only major option left is the $1,250 Bose Premium Audio Package. Tick that box and Bose pumps out a few extra watts through the six standard speakers, and a one-year SiriusXM subscription and alarm system comes along for the ride. All that's left is to pick your colors, roof fabric ($500 more for the Bordeaux red top), wheels (another $500 for the 15x6-inch aluminum hoops) and one of two interior trims. That's it. And that's fine. If you're looking for 10 million possible combinations, there's a Mini dealer down the street more than willing to take your order – and charge you a suitably Germanic premium for your individuality.

But the 500C can't possibly compete in the driving department, right? Well, that depends on what you're after.

While the 101 horsepower and measly 98 pound-feet of torque provided by the 1.4-liter Multiair four-cylinder couldn't outrun an injured turtle with a bottle rocket on its back, the 500 can make a case for itself if you're a fan of momentum driving – even if merging on the freeway requires you to consult that rosary hanging from your rearview mirror.

With a wheelbase that's practically as long as the Fiat is wide, trundling along over 70 mph feels like you're doing The Ton. The light steering – useful in the city – goes from targeted to twitchy once you've crested 50 mph. Lay into the throttle in any gear at any speed and the tiny four-cylinder wheezes to life, just enough to get all 2,400 pounds past that smoke-belching Merc and into the path of an oversized Suburban (our sincere apologies to said Chevy driver).

But get off the freeway and it's a totally different story – one in which the Fiat finally gets to play protagonist.

Hit the on-ramp under 50 mph and you can slide the top all the way back, making the 500 one of the most charismatic targas since the 1965 Porsche 911. All that high-speed angst and worry seems to get sucked into the sky as the 500C finally gets into its element. And its groove. It's like piloting an O.G. Beetle, but without any of the stuttering, strain and potential for death.

Dropping the top is one of the most simple affairs this side of a Mazda MX-5 Miata, with two roof-mounted buttons controlling the fabric roof's surprisingly quick motor. Press the button once and the top retracts nearly all the way back, still allowing a rather unobscured view out the rear window. Press it again and the fabric accordions atop the trunk, providing just enough of a view to make out the light bar on a CHP vehicle, but not much more. Not that you'll be having many encounters with the highway's police in the first place. With the top all the way back, wind buffeting is well controlled and it's only slightly better in the two-thirds position. If you press the close button twice, the top moves into a pseudo-sunroof configuration, and when fully closed, wind noise is kept in check unless you're crossing a particularly gusty bridge.

While the steering isn't nearly as dialed-in as a comparable Mini or Mazda, it provides enough feedback to instill some faith in the chassis. It's safe to assume that most 500s will be outfitted with the six-speed automatic, but the enthusiast's money is on the manual, which provides significantly more engagement per mile, although it's delivered through a rubbery gate and a featherlight clutch. Brake feel is predictable once you get past the initial inch of slop and the stoppers held up to a beating, if only for a bit. Tire squeal from the 185/55 R16 rubber comes on at anything past six-tenths and body roll is severe, but the 500's oh-so-low limits quickly became part of its charm. Its bolsterless seats, driver-only armrest and ability to annihilate nearly all rearward visibility with the top down... not so much.

On the infotainment front, both a USB connection for iPods/MP3 players and an eighth-inch auxiliary jack are mounted on the left side of the glovebox. Tip: Choose your playlist before you go, as it's both impossible to plug in while driving and the stereo's menu system makes choosing an artist/album/song feel like playing mid-90s Mindsweeper blindfolded. The same goes for the voice controls, which are – at best – half-baked. If you're looking for interior tech, look at the Ford Fiesta.

But if you're interested in style at a price, the 500 is where it's at. And the smiles-per-mile quotient is easily tilted in favor of the open-roof 500C, despite its paltry 53-pound weight penalty. With EPA estimates of 30 mpg in the city, 38 on the highway and around 32 mpg observed, it beats out subcompacts with nowhere near the charisma. Less-than-respectable interior plastics and a comically cute trunk (5.3 cubic feet, or enough for a grocery run for two malnourished 20-somethings) might be the biggest everyday negatives next to the shelves that stand in for rear seats, but such is the price of presence on a budget.

So... could we live with it day-in and day-out? No. Or at least, not in its current form. With the turbocharged, 175-hp Abarth version set to arrive late next year, nearly all the dynamic quibbles we have with the suspension, tires and engine (maybe even the interior) should be addressed. In keeping with Fiat's pricing approach, the Abarth will likely be thousands less than a comparable Cooper S with half the trimmings, and in ragtop form, it could be many things to many people. Even a finicky San Franciscan. 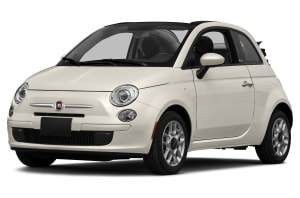