10 reasons why you should buy a Pontiac Aztek right now

When Bad is Good

In the car world, bad can be good. And good can be bad. It just takes time and a little hindsight.

Many cars start out bad and stay bad forever, examples being the Chevy Vega, Dodge Omni, Oldsmobile Alero, Ford Escort ZX2, Acura Vigor, and Toyota Echo. Sometimes cars start out good but quickly get bad – and stay bad. (Remember when the 2002 Mercedes-Benz C230 Kompressor Sports Coupe was good for about five minutes? It never will be again.) And in other instances, a car starts good, gets bad, and then turns good again. Really good. Anyone see the prices of Screaming Chicken Trans Ams lately?

This year, the Pontiac Aztek – which was sold between 2001 and 2005, and of course started out bad and has remained that way – turns 15 years old. That means now – right now – is the time to buy one. Yes, the Aztek is so unflinchingly bad it’s going to get good. Don’t laugh. Hear us out as we present the following 10 arguments.

Prices will begin to climb in five years

Classic-car conventional wisdom says a model becomes a classic and begins to appreciate in value when it turns 20 years old. Just as this is happening today for the automotive wonders of the 1980s and ‘90s – vehicles like the Buick Grand National, Chevy Camaro IROC-Z, and Porsche 911s of the era – this will happen for the Pontiac Aztek in 2021. Now is the time to buy low – and we mean low. Azteks are now essentially free, just check eBay or Craigslist. Prices range from $450 for a beater to about $2,200 for a future Pebble Beach concours entrant. Losing money in five years on that kind of investment seems unlikely. Plus, GM sold about 120,000 of these things, so there’re plenty to go around. Obviously buy the best one you can find and afford, and always remember that the first year of production usually becomes the most desired. Plus, you can’t drive your stock portfolio. 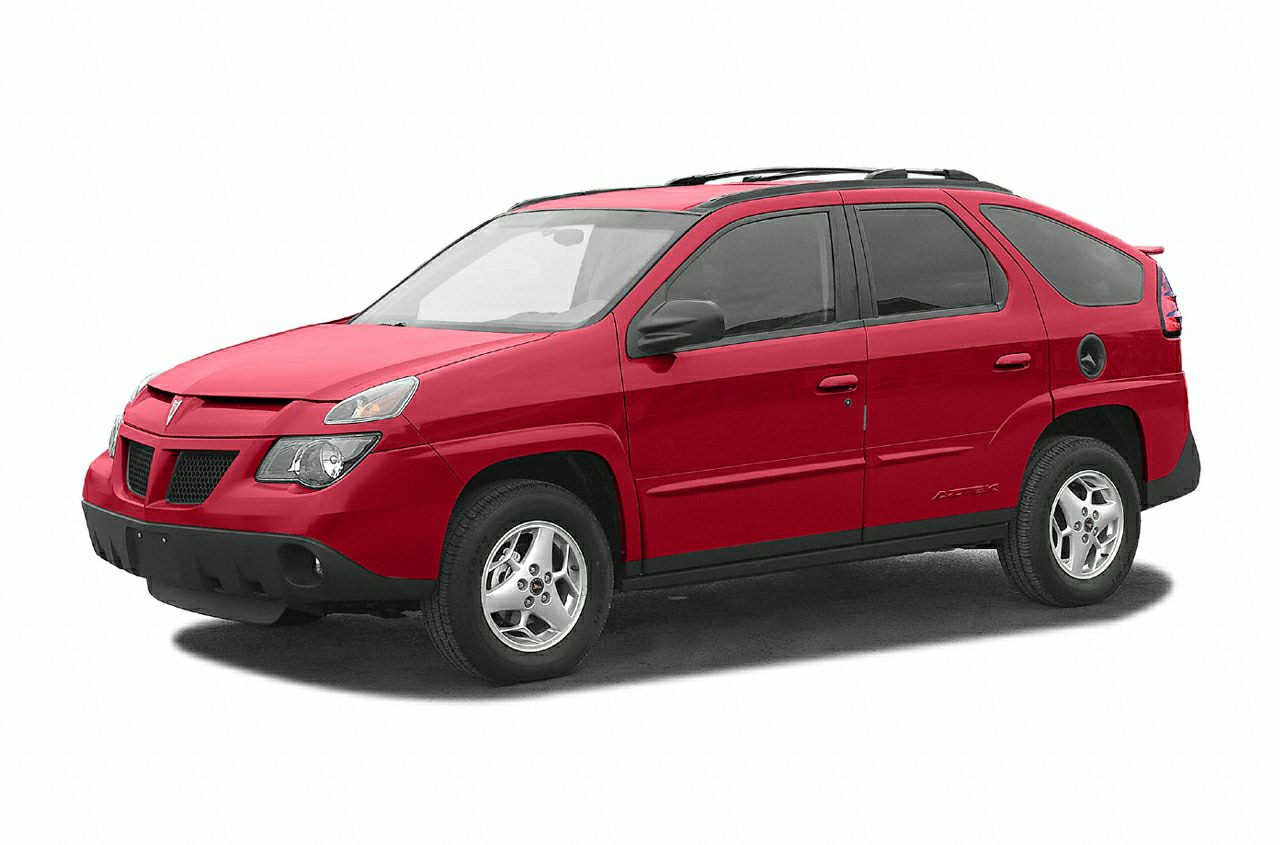 A future increase in Pontiac Aztek values will be partially fueled by the vehicle’s global notoriety on TV hits like Breaking Bad and American Dad. Don’t dismiss the impact of media and popular culture on vehicle values; the two have proven to go hand-in-hand time and time again. But it takes a while for this to develop, for the market to catch up. Sure, driving around in Walt’s methmobile might not seem like a great idea at the moment, but give it few years, let the pangs of nostalgia grab the throngs. It will. It always does. And when it does they’ll reach for their wallets. In fact, they already are. Just last September, a study showed that millennials have taken a shine to the Pontiac SUV. In the first half of 2015, 25.5 percent of Aztek buyers were millennials, which is greater than the 16.8 percent of used-car purchases the age group accounts for.

The fact that the Aztek Fan Club exists and is teeming with active members is some evidence, and because it bills itself as “The Original Aztek Fan Club” must mean there are others. People care about the Pontiac Aztek – it’s hard to believe, but they do. And more people will care as time goes by. A community rallying around a particular vehicle is usually the first step toward collectability and increased value. They share information, create interest, and solve common problems. A few minutes on aztekfanclub.com, and the Aztek newbie can learn about tearing down GM’s 3.6-liter V6, repairing the crossover’s Versatrack all-wheel-drive system, air conditioning repair, service bulletins, aftermarket upgrades, and of course how to order a t-shirt. And that’s just the tip of the Aztek iceberg.
slide-1386419

It Was Named The Worst Car of All Time

Sometimes it’s better to be famous for being infamous, and that goes for cars as well as reality TV stars. If there’s a worst cars list out there, the Pontiac Aztek is on it. And its hideous status solidified back in 2011 when Edmunds named the 100 worst cars of all time and chose Pontiac’s first SUV as its number one worst car in the history of cars. That’s got to count for something. Hell, the Aztek even bested, or worsted, so many other legendary examples of terrible for that title, it may be the ultimate badge of honor. Cars like the Yugo, the Vega, the Cimarron, and even the three-wheeled Reliant Robin were voted better than the heinous Aztek. Pretty cool. Incredibly, on Edmunds’ 100 Ugliest Cars of All Time list, the Aztek finished a disappointing fifth.
slide-1386420

It took a while, but Edsels are now legitimate collector cars. And they’re expensive. The more desirable bodystyles, like convertibles, average about $50,000 on today’s market in #1 condition according to the Hagerty Valuation Tool. Edsels were built by the Ford Motor Co. from 1958 to 1960. The brand was such a flop it became the poster child for flops. And not just flop cars. Edsel became synonymous with embarrassing failure. Sound familiar?

This is guaranteed. A good-condition Aztek will hit it big at the local cars and coffee. First of all, it will be the only one there. And the curiosity factor will be just too great to resist. Park it among the 50 Mustangs or in that endless line of Camaros, and your Aztek will stand out. Your $1,500 Aztek. It will be the ride everyone will remember at the end of the day.

We Asked The Man Who Owns One

His name is Bob. How did we meet Bob? We chased him down in traffic and asked him to pull over for a chat. He was driving his red 2002 Pontiac Aztek, which he loves. Drives it everyday, has since he bought it back in 2004. It now has just over 120,000 miles on its odometer, which still works. “It all still works,” says Bob about his pride and joy. “Well, except for the air conditioning, which stopped working a few years ago.” Forget that we’re in Riverside, California, on a 100-plus-degree summer day, because Bob doesn’t seem to mind. “I can’t kill this thing. I change the oil every 3,000 miles and it just keeps going. Great family vehicle. My oldest son wants it for his first car, but I don’t want to give it up.” Bob’s Aztek is a little rough, but it’s nothing that won’t buff out. “I think it’s cool looking,” Bob tell us over some Starbucks. “I originally bought it because I love the looks. I had to have one. Coolest car I ever saw. And on the subject of whether it will be come a future collectable, Bob says, “I hope so. I get compliments on it all the time. People love it. They ask me what it is. Most people think it’s a new 2017 model. They’ve never seen one before. I think it’s going to be a classic.”
slide-1386423

We Asked McKeel Hagerty, and He Knows Stuff

McKeel Hagerty is the President and CEO of Hagerty Insurance. You may have seen him on TV. He’s a collector-car expert and a collector-car valuation expert. But he’s also a car lover, having restored a rusty 1967 Porsche 911S with his father when he was 13. He still owns that car today. We contacted McKeel and asked him about the Aztek, and here’s what he had to say.

"Some people are attracted to cars that are remembered more for why they weren’t popular when new. The fact it was a controversial design and didn’t sell well will make it an object of curiosity from a historical standpoint many years from now. It isn’t unheard of to see an Aztek at a casual cruise-in or local car show. And they are almost always displayed with the tent accessory. From a valuation standpoint, they will likely stay low for many years before any noticeable increase, which makes it an excellent entry-level vehicle for someone interested in standing out at car gatherings. Given the low values in the current market, it is important to seek out an example that has been well cared for with a solid body. You could easily outspend the value making up for deferred maintenance. Just remember the tent accessory is mandatory!"

To quote the great Lloyd Christmas, “So you’re telling me there’s a chance.”
slide-1386424

Because Somebody Needs to Build the Ultimate GM Performance Aztek

We have it on good authority after talking to a few people that know such things that a V8, manual, rear-wheel-drive Aztek is possible if a few really smart people are given unlimited time and money to create it. We’re thinking a C7 Z06 drivetrain and suspension makes sense here. As far as we know, something like this has never been done in real life. The time has come.

If we’re wrong, when you’re done with your Aztek you can destroy it with your buddies and become YouTube stars.

Use your imagination. Fire. Dynamite. Throw it off a cliff. Crush it with a tank. Shoot it with an AK-47. Whatever, it doesn’t really matter. Just make it spectacular and film it. The millions of YouTube views are almost guaranteed. Heck, we’d watch it.