The turbo and electric options bring the biggest smiles So, a subcompact crossover can be fun to drive. It didn't seem possible before the Hyundai Kona came along, but sure enough, this funky little urban runabout managed to pull it off … and still does. Its available turbocharged engine that blows away most competitors certainly helps. So too does its excellent Kona Electric variant. Yet, even the most basic 2021 Hyundai Kona with its plain-jane 147-horsepower engine is an engaging and surprising sprightly car to drive. The distinctive styling certainly adds to the fun as well.

Clearly, the Kona can make an emotional connection better than most of its competitors. It's also reasonably priced, is packed with features, has a generous warranty and offers all-wheel drive, so there's some substance behind the fun. Still, it's one of the least practical subcompact crossovers (the cargo area in particular is quite small) and if you're looking for that tall, commanding view of the road, you won't find it here. That limits its broad appeal, but if you're looking for a fun and funky little crossover to drive around town, it's tough to beat.

A new Night Edition debuts, following a trend of gloss black wheels and trim applied liberally to a car's exterior and interior. Hyundai has eliminated the Sunset Orange and Lime Twist paint colors, along with their corresponding interior accents. This pop of color was one of the things that helped differentiate the Kona, though we suppose if Hyundai killed it, customers weren't as keen on color as we are (the existence of the Night Edition certainly backs that up).

Note that there will be significant updates made for the 2022 Kona, including a handsome front-end redesign and the new, sporty Kona N Line. 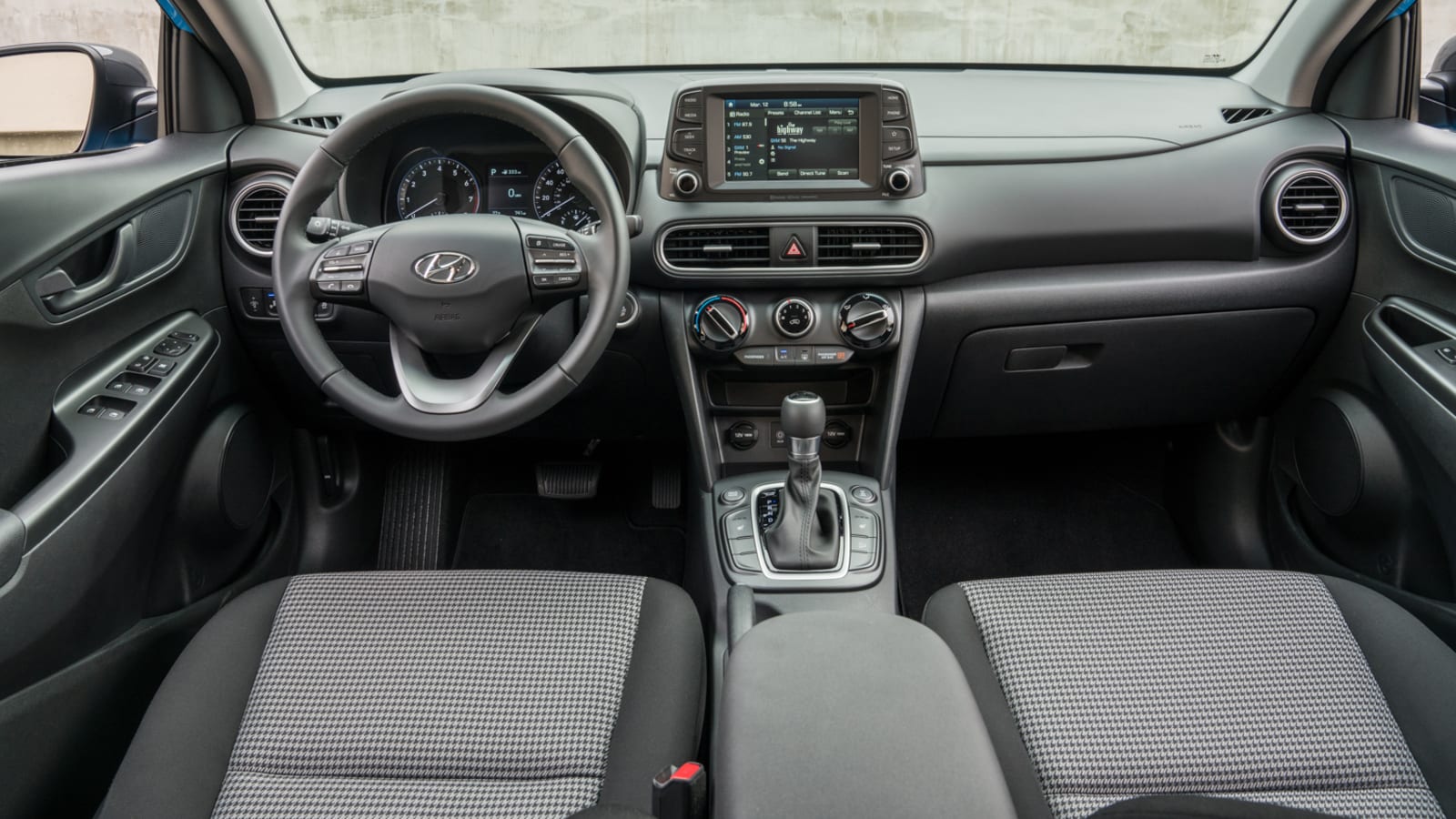 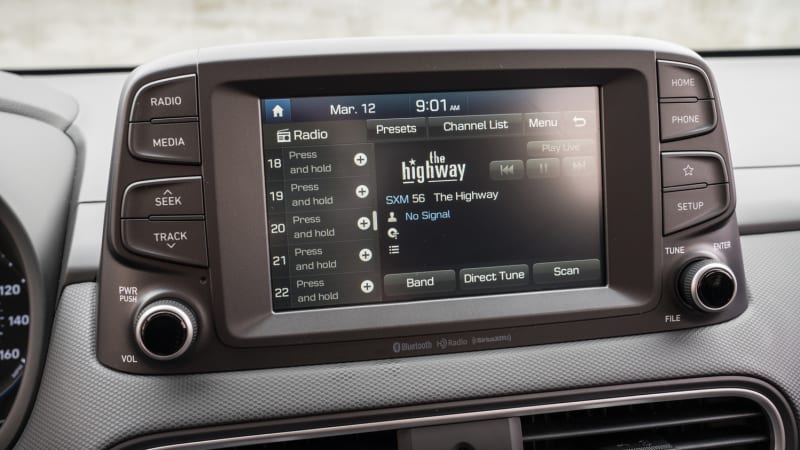 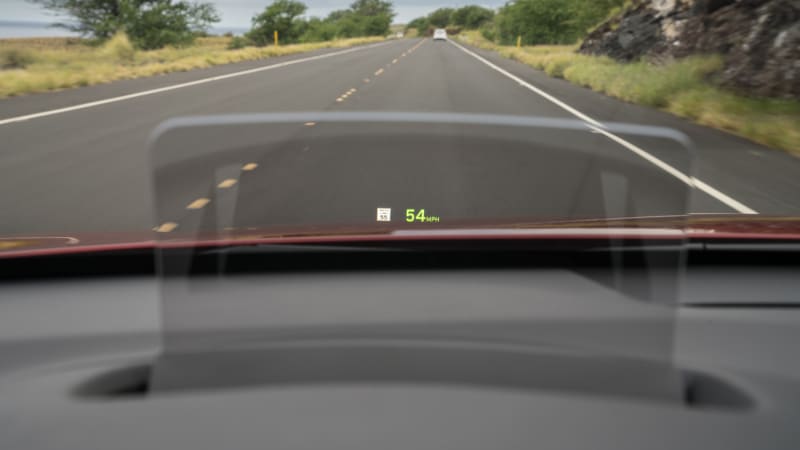 Most interior plastics are unremarkable, even for this segment. The design itself also isn't the most interesting, but there are at least varying textures that help break up the monotony and standard houndstooth cloth upholstery. Sadly, the Lime Twist and Sunset Orange accents have been discontinued. The Kona Electric stands out with lighter dash and door colors, including an available two-tone color scheme of creme and blue. It also has a unique rising center console with an electronic shifter and different storage (photo below).

With either design, the low dash offers good visibility, the steering wheel sufficiently adjusts, and upper trims benefit from a power driver seat that provides more adjustability than most in the segment. The driving position is also higher than a car, but we wouldn't say you get the "commanding view" of the road like you'd get in a bigger crossover.

One of the Kona's major perks is the easy-to-use infotainment system. As in other Hyundai products, it combines a touchscreen, plenty of physical shortcut buttons, and importantly, physical volume and tuning knobs. The user interface isn't the prettiest, but it's easy to read and comprehend, and it responds quickly. Apple CarPlay and Android Auto are standard features on all models. Also offered is a head-up display, an unusual feature for this segment and price point. It's a color unit that displays on a clear plastic panel that rises up on the dashboard rather than the windshield. 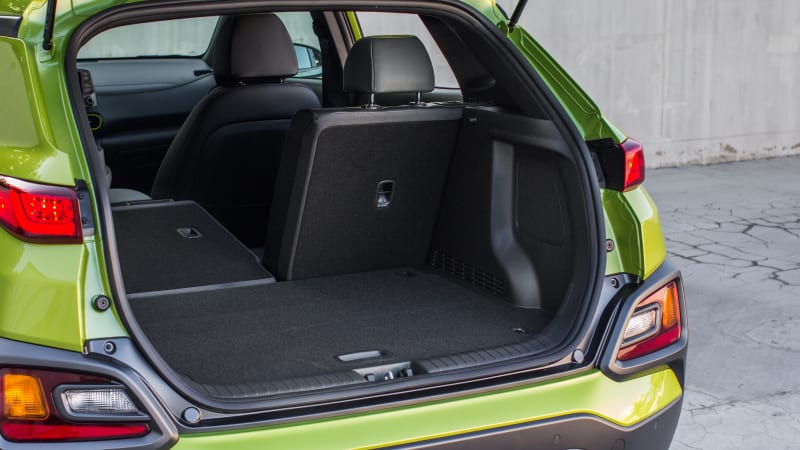 How big is the Kona?

The Hyundai Kona is on the small side of the subcompact crossover class, which ranges from fairly tight vehicles such as the Kona and the Mazda CX-3 to particularly spacious vehicles such as the Subaru Crosstrek, Nissan Kicks and Chevrolet Trailblazer. It's one of the shortest in overall length, and that's reflected in particularly tight rear legroom. Your backseat passengers should at least be happier than they'd be in the even more cramped CX-3 or the claustrophobic Toyota C-HR.

Cargo space is also among the smallest in the class. According to the specs, there's about 19 cubic feet of space behind the Kona's raised back seat. That's only 2 cubes less than the Subaru Crosstrek, which isn't much on paper, but in practice, the difference is immense. Its cargo area just isn't as deep or useful. We managed to fit too fewer midsize suitcases in the Kona than in the Crosstrek or Kicks. We even managed to fit more stuff in the smaller Hyundai Venue thanks to its clever two-level floor. Still, the Kona is better than a CX-3 or C-HR.

This section is typically pretty simple for other subcompact SUVs, but not so the Kona as it's available with two turbocharged gas engines and an electric powertrain.

The entry-level engine offered on the SE and SEL trim levels is a 2.0-liter naturally aspirated inline-four that makes 147 horsepower and 132 pound-feet of torque. It's paired with a conventional six-speed automatic, and can be had with either front-wheel or all-wheel drive. Some competitors don't offer AWD at all (C-HR, Kicks, Kia Soul). Fuel economy is 27 mpg city, 33 highway and 30 combined with FWD. It lowers to 25/30/27 with AWD, which is a considerable drop these days.

Moving up to the Night Edition, Limited and Ultimate trim levels brings a turbocharged 1.6-liter inline-four making 175 hp and 195 lb-ft of torque that blows away nearly every competitor. This engine comes with a seven-speed dual-clutch automatic transmission and is again available with either front-wheel or all-wheel drive. Despite a big difference in power, both engines return nearly the same fuel economy. The turbo gets 28/32/30 with FWD and 26/29/27 with AWD.

But for max efficiency, there's the 2021 Hyundai Kona Electric, pictured below. Its single electric motor produces the equivalent of 201 hp and 291 lb-ft of torque. It's front-wheel-drive only. Electric range is a tremendous 258 miles and its efficiency in general is comparable to the Chevrolet Bolt, and just a bit better than the Kia Niro Electric and Nissan Leaf. The Kona is an impressively nimble little crossover, regardless of the version you get. Steering is quick and well-weighted, and the car corners with only mild body roll. The great visibility and small size further add to its fun-to-drive nature. The ride is compliant and well controlled, but is a bit stiff relative to a Honda HR-V or Nissan Kicks.

The base 2.0-liter engine is right on par with the competition, which means it's sufficient. It's on the slow side and gets buzzy when flooring the throttle, but it's also pleasantly responsive. Its torque converter automatic transmission picks gears smoothly and reasonably promptly. There's even a Sport mode that sharpens transmission and throttle response even further. Altogether, it makes a compelling case to skip the turbo engine.

Many of the same dynamic attributes apply to the Kona Electric, and if anything, the added battery weight actually improves it by lowering the center of gravity. Also, as an electric car, it benefits from the typical silent wave of all-electric torque when accelerating and from the heavy regenerative braking that makes one-pedal driving possible. As a small, urban-focused electric car, the Kona Electric shines.

Our comprehensive full comparison test of subcompact crossovers. The Kona scored well but did not come out on top.

Read more specifics about the electric Kona based on a week our various editors spent with it. We test a Kona with the base 2.0-liter engine and the sweet-spot SEL trim level. 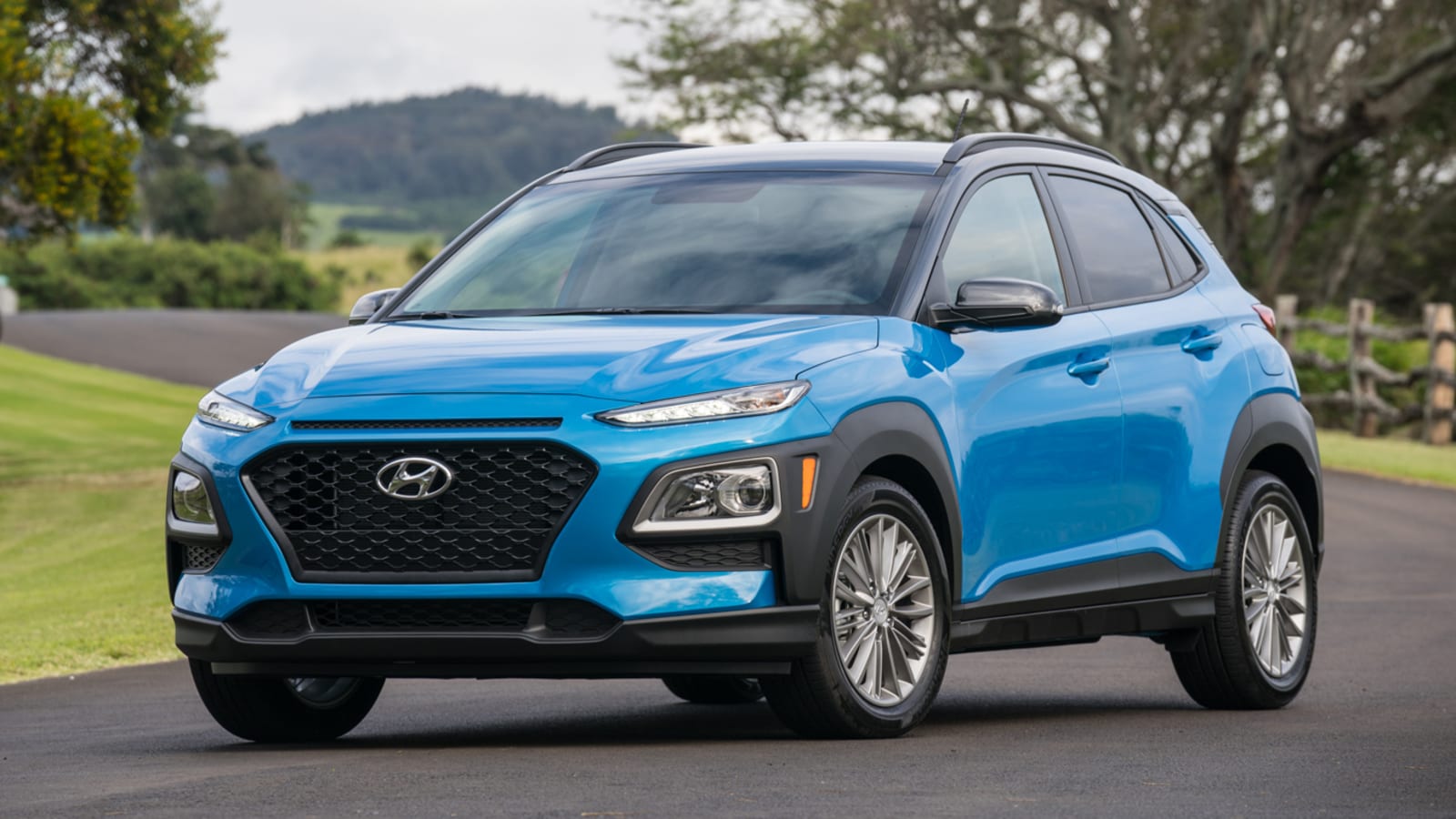 We also tested the range-topping Ultimate with the turbocharged engine upgrade. Reading all of these reviews will give you a well-rounded, in-depth look at the entire Kona line-up. 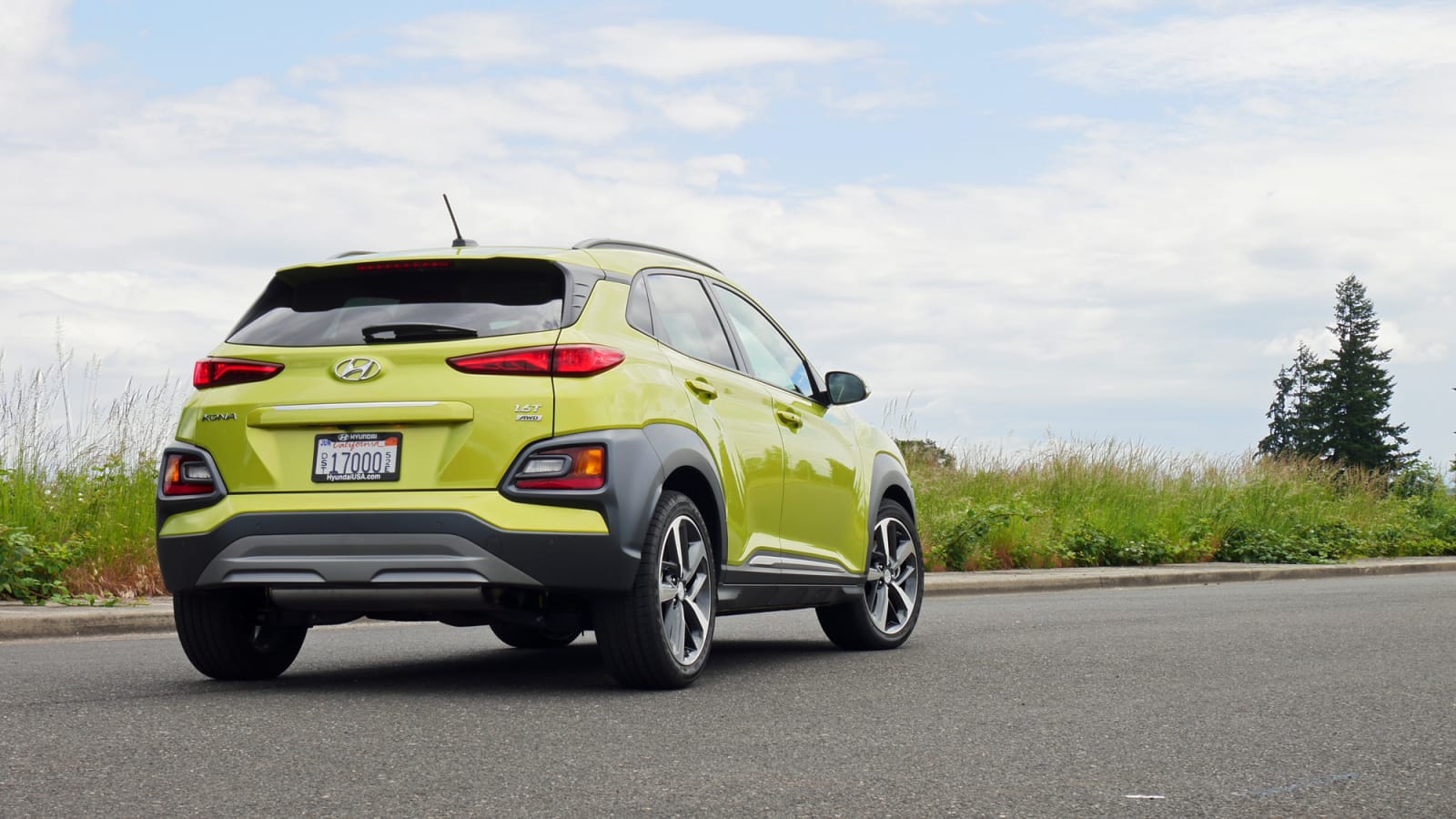 The 2021 Hyundai Kona starting price of $21,540 is quite reasonable given its general excellence and the amount of standard equipment you get. The lengthy five-year warranty helps, too. Subcompact SUVs can be sparsely equipped to start, but the Kona SE gets standard alloy wheels, automatic headlights, driver assistance tech (see safety section), a blind-spot mirror, a height-adjustable driver seat, cloth upholstery, a six-speaker audio system, a basic touchscreen interface, Apple CarPlay, Android Auto and two USB ports.

The SE is good value, but the SEL is perhaps even better as for $1,800 you get bigger wheels, blind-spot warning, rear privacy glass, roof rails, proximity entry and push-button start, heated seats, a leather-wrapped steering wheel and satellite radio. The other trims are also reasonably priced, but this seems like the sweet spot.

All prices below include the $1,140 destination charge. All-wheel drive is a $1,400 option on them all. Also, in terms of the Kona Electric, keep in mind that it is eligible for a $7,500 federal tax credit plus addition possible state credits.

You can find a breakdown of each Kona trim level's features, specs and local pricing here on Autoblog. The Kona Electric is here.

The government gave the Kona a perfect five stars for overall, front and side crash protection. The Insurance Institute for Highway Safety gave the 2020 Kona its highest award of Top Safety Pick as a result of earning the highest rating of "Good" in all crash tests, the highest forward collision prevention rating of "Superior" and having optional headlights rated "Good." The only weak points in IIHS evaluation include "Poor" rated headlights on base models (this is typical for the industry) and child seat LATCH anchors with "Marginal" accessibility.