Crossover or hatchback, this space- and fuel-efficient Nissan is a smart value buy It's easy to roll your eyes at many of the tiny "crossovers" that are flowing out of carmakers these days. Though marketed as crossovers and given a few token styling cues to go with a modest increase of ride and seat height, most are simply glorified hatchbacks. That description certainly applies to the 2020 Nissan Kicks, which doesn't even offer all-wheel drive to satisfy the crossover M.O. But here's the thing: Being a hatchback isn't bad, and the Kicks is quite a good one. It supplies a massive amount of space for a vehicle its size, comes with a wealth of safety features for a vehicle with its modest price, and doesn't feel like a penalty box to sit in or drive despite the hatchback reputation. For those seeking an efficient, inexpensive urban runabout that can swallow enough stuff for a weekend getaway, it makes a lot of sense.

Indeed, it makes more sense in that scenario than other subcompact "crossovers" that usually cost more and provide less space. Upper trim levels are also quite nicely adorned, with a few key trim pieces drawing your eyes away from understandably cheaper ones. However, there are reasons it's not a slam dunk. Nissan's engineers did their best to make the Kicks feel quick enough, but there's only so much one can do with a wheezy 122 horsepower. Its lack of all-wheel drive is another issue, and the unusual steering can frustrate. This is by no means a fun car to drive, and it's hardly a comfy, quiet, long-distance cruiser, either. So it's not perfect, but within the segment company it keeps, it doesn't need to be.

The Nissan Safety Shield 360 collection of driver assistance and safety technologies is now standard on every Kicks for 2020. The Kicks provides a surprisingly premium environment for its price point. Although there's no shortage of hard plastic about, on the door sills in particular, the areas you prominently see and touch are of a relatively higher quality. Even the base trims come with nifty quilted cloth upholstery and a nicely contoured flat-bottomed steering wheel. That gets wrapped in leather in the SR trim level, which also gets simulated leather applied to dash with orange accents that really step up the vibe.

The buttons and knobs throughout move and click in a pleasing way, while the SV and SR trims get a large, configurable display in the instrument panel. Standard on every Kicks, meanwhile, is a 7-inch touchscreen mounted a bit lower than those of some rivals, but it's also pretty easy to reach, and it avoids the tacked-on-iPad look that some dislike. The system is also pretty straightforward to use, especially if you mostly rely on it for simple tasks like changing radio stations. Apple CarPlay and Android Auto are standard on the SV and SL along with satellite radio. The SR trim can be equipped with an optional Bose sound system that adds speakers inside the driver's headrest (no soup for you, Mr. Passenger). How big is the Kicks?

On the outside, the Kicks measures up to being one of the longer subcompact SUVs — it's pretty close to the Honda HR-V. Notable competitors like the Kia Soul and Hyundai Kona don't take up as much space, and despite the two resembling each other, the Kicks is considerably larger than the Hyundai Venue. That said, we're talking a difference of inches here. The Kicks is still far smaller than Nissan's Rogue and other compact SUVs.

Despite this, the Kicks manages to better some of those compact SUVs in terms of cargo capacity, and no other subcompact model, aside from the HR-V, comes close to its stuff-carrying potential. Its cargo area is deep, wide and boxy, and the available roof rail crossbars are big, sturdy things well-suited to expanding capacity with a roof box or equipment racks. Passenger space is also generous for this segment thanks to tall-mounted seats that provide ample, chair-like leg support (basically, your legs aren't squished despite the seats being fairly close together). The bubble-like greenhouse also affords excellent headroom and visibility. This is going to be simple. Every 2020 Kicks comes with the exact same powertrain: a 1.6-liter naturally aspirated inline-four that sends 122 horsepower and 114 pound-feet of torque to the front wheels only through a continuously variable transmission (CVT). Expect a 0-60-mph time just under 10 seconds, which is about as slow as it gets for cars sold in the United States. On the other hand, fuel economy is better than its more powerful competitors, coming in at a quite thrifty 31 mpg city, 36 mpg highway and 33 mpg combined.

If you need to merge onto a fast-moving highway, you're going to need quite the gap, as the Kicks' 122 horses run out of steam quickly. Full-throttle acceleration from a stop? Yep, it's going to feel gutless. However, Nissan's engineers adeptly tuned the throttle and CVT to mask this power deficit when driving sedately around town — you know, exactly how the vast majority of dawdling drivers will. It honestly and quite surprisingly doesn't feel that slow, nor does the CVT constantly make you wish for a manual to better wring out the thimbleful of oomph that's there. On the contrary, the CVT does a bang-up job. It simulates gears to provide a more natural driving feel and avoid the interminable CVT mooing, but as it's still a CVT, it can still lock onto an ideal rpm to maximize power and fuel economy. This was demonstrated on a gradual grade where a traditional transmission would be forced into either a too-high or too-low gear, resulting in either a bogging or screaming engine. The Kicks, by contrast, just smartly chugged along.

From a powertrain perspective, then, the Kicks is better than you'd imagine. A stout structure and capable suspension tuning also yield sufficient poise when thrown into corners. There's a fair bit of body roll, but that's to be expected for a tall, narrow hatchback with a couple extra inches of ground clearance. The real disappointment is the steering. It's incredibly slow, for one, with a 16.8:1 ratio and 3.08 turns lock-to-lock in a segment that's typically in the 13's and mid-2's, respectively. It feels like Nissan wanted the Kicks to feel overtly SUV-like, but in doing so, nullified the car's agility. The weighting is also wildly inconsistent — sometimes there's heavy electric assistance at low maneuvering speeds, other times seemingly none, usually when quickly transitioning from one direction to the next.

What more can I read about the Nissan Kicks?

In our first substantial road test review of the Kicks, we're impressed by its interior space, fuel economy and value, and even find it to not be as doggedly slow as expected. Comparing the engine specs and dimensions of the Kicks versus other subcompact crossovers. 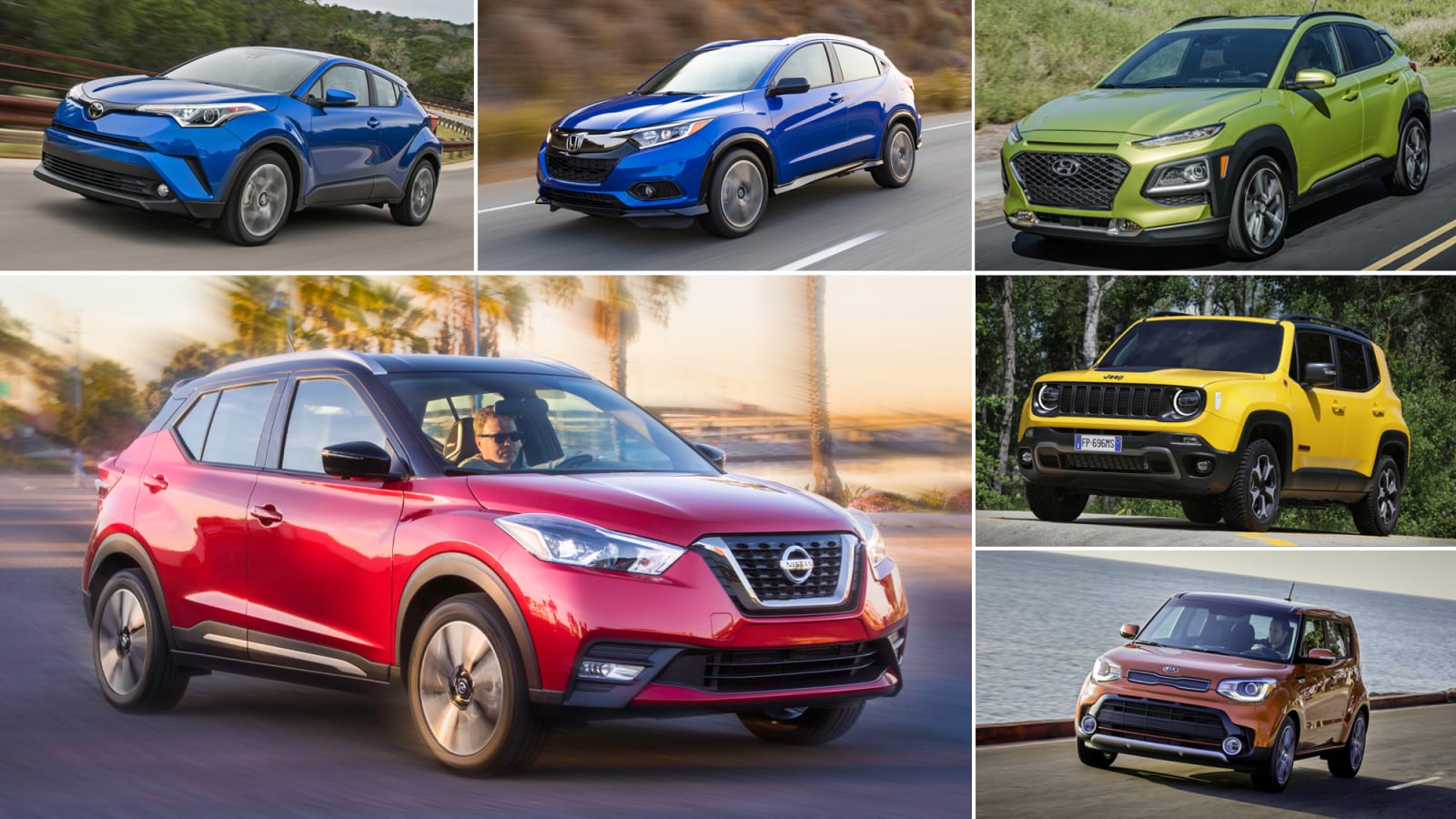 What features are available and what's the Kicks' price?

Pricing starts at $19,965 for the base Kicks S, including the $1,095 destination charge. For that, you get 16-inch steel wheels, automatic headlights, rearview camera, the Nissan Safety Shield 360 driver assistance package (see Safety section), a height-adjustable driver seat, cloth upholstery, 7-inch touchscreen, a USB port, an aux jack and a six-speaker sound system.

The SR still doesn't break the bank at $22,215, but its upgrades mostly fall into the "non-essential" category. These include fog lights, a leather-wrapped steering wheel, surround-view parking camera and "Prima-Tex" simulated leather applied to the dash. It also opens the door to the only Kicks option: the $1,000 Premium package, which adds Prima-Tex upholstery, heated seats and an eight-speaker Bose sound system. What are the Kicks' safety equipment and crash ratings?

Every 2021 Nissan Kicks comes with more standard safety equipment than is usual for any car segment, let alone its more economical one. Included are automatic forward and reverse braking with pedestrian detection, lane-departure warning (there's a beep and wheel vibration), blind-spot and rear cross-traffic warning, and rear parking sensors. The Kicks also has front knee airbags and rear side airbags, which are rare in any car.

The Kicks received the best possible scores in every crash test conducted by the Insurance Institute for Highway Safety. Only "Poor" and "Acceptable" headlight ratings kept it from a Top Safety Pick award, but such results are not unusual at this price point.