Hyundai Venue Luggage Test | How big is the trunk?

The Hyundai Venue is absolutely tiny, it must be useless, right? Wrong! Although it's considerably shorter in length than the already tiny Hyundai Kona, with a wheelbase that doesn't even cross the 100-inch threshold, the Venue makes impressive use of the space it has.

Nowhere is that better seen than in the cargo area. There's 18.7 cubic feet behind the back seat, which is only 0.5 cubes smaller than the Kona, and as you're about to see, the space it has is well utilized with several clever touches that increase capacity and versatility. 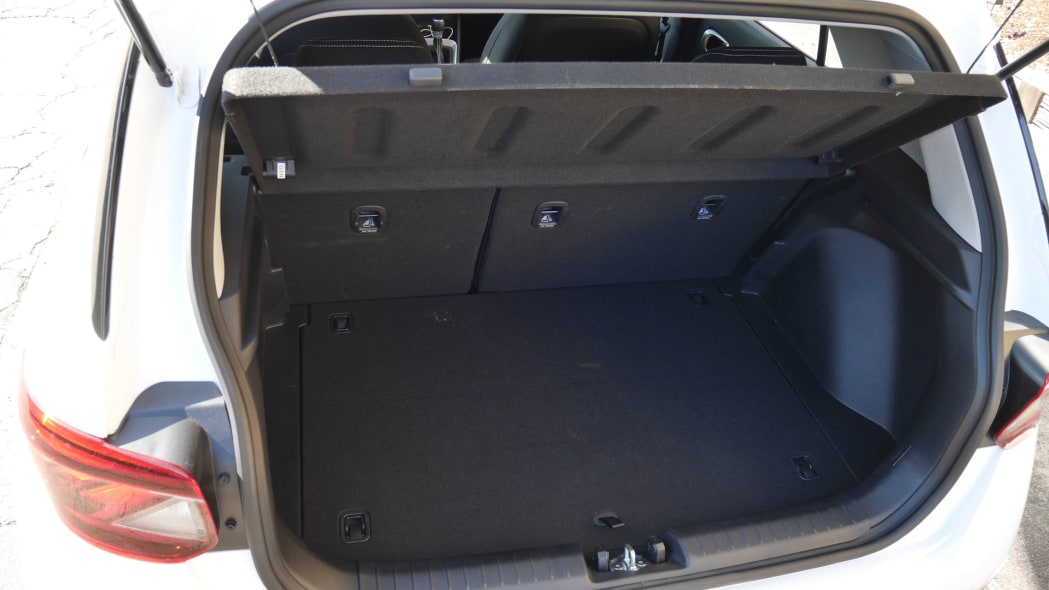 Here is the Venue in its most basic configuration. This would definitely not be the as-advertised 18.7 cubic-feet. (We'll get to that in a minute.)

Spoiler alert, this trunk configuration isn't going to hold much of the following, but as I always write this ... I use two midsize roller suitcases that would need to be checked in at the airport (26 inches long, 16 wide, 11 deep), two roll-aboard suitcases that just barely fit in the overhead (24L x 15W x 10D), and one smaller roll-aboard that fits easily (23L x 15W x 10D). I also include my wife's fancy overnight bag just to spruce things up a bit (21L x 12W x 12D). 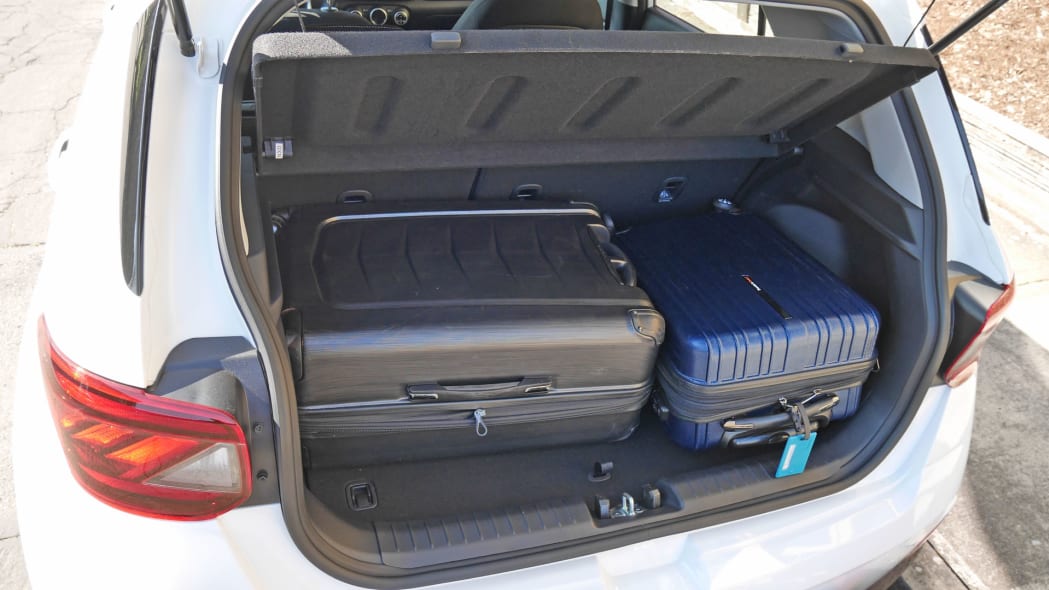 Right, so this is pretty crappy. We got one big roller and the smallest one, both jammed in there, that's it. When I tried to load the big one length-wise, this is what happened ... 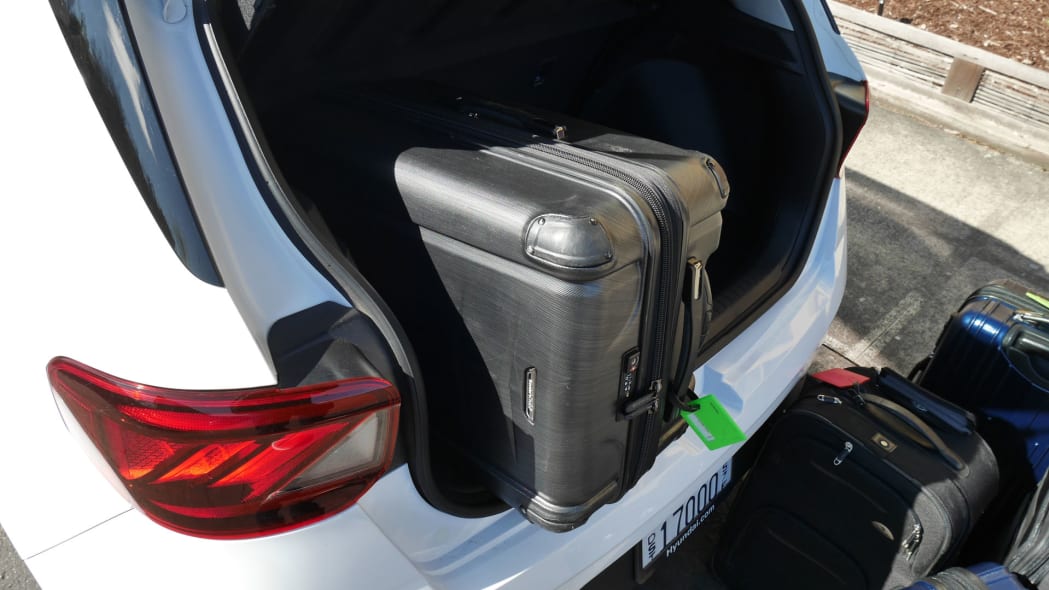 OK, now let's take the cargo cover completely out of the car. It's a hatchback-style rigid piece. 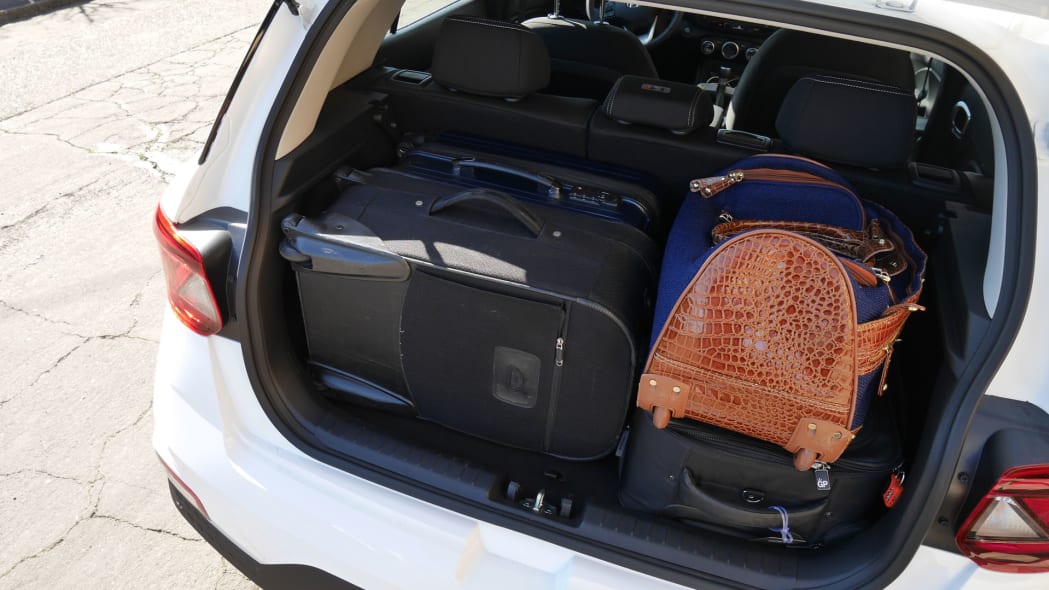 That would be all but the two biggest bags. Basically, you can carry four people in the Venue and each could bring a reasonably sized piece of luggage.

Normally, that would be the end of the story, but the Venue has tricks up its sleeve.

Trick 1: the lowering floor. Below, clockwise from upper left, is the standard height, the lowered height and then a detail shot of how much is gained. 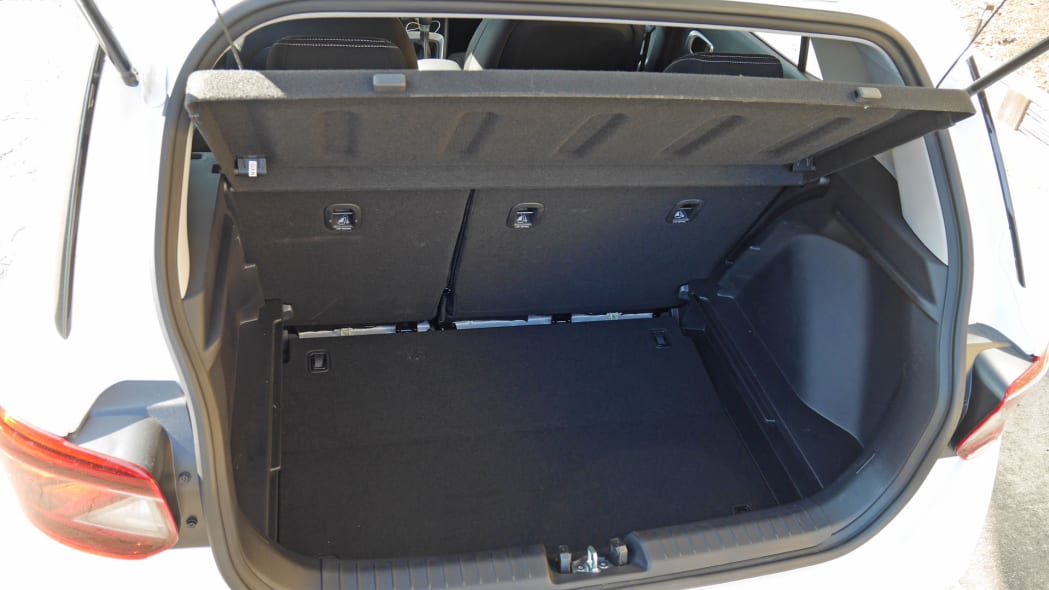 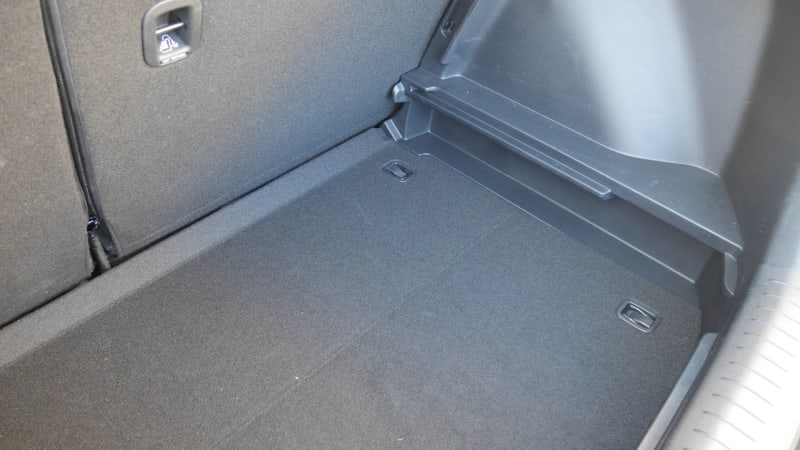 My guess is that this is the full 18.7 cubic feet. Utilizing extra floor space to get a behind-the-seat number is common, with the Kia Soul and BMW X2 among examples off the top of my head. Unlike the X2, however, this extra space doesn't come at the expense of a spare tire. There's still one down there.

Why even bother with the higher floor height, then? Because you wouldn't have a fully flat load floor when the back seats are folded. 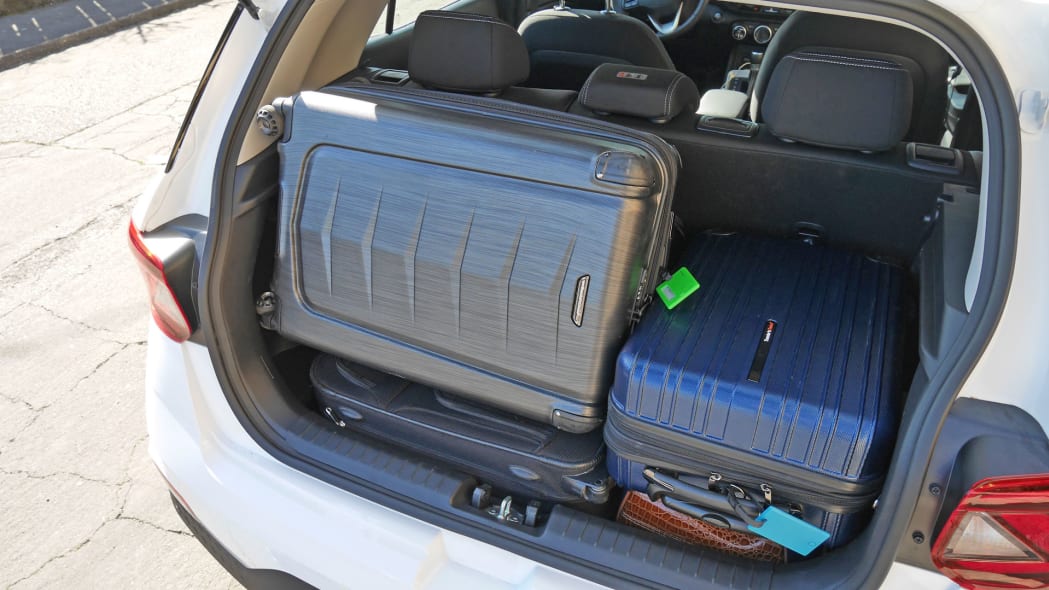 So, with some creative packing (the fancy bag gets squashed below the small roller), I actually managed to fit the biggest of the roller bags inside. As you can see, there's even room for a bonus duffel bag. 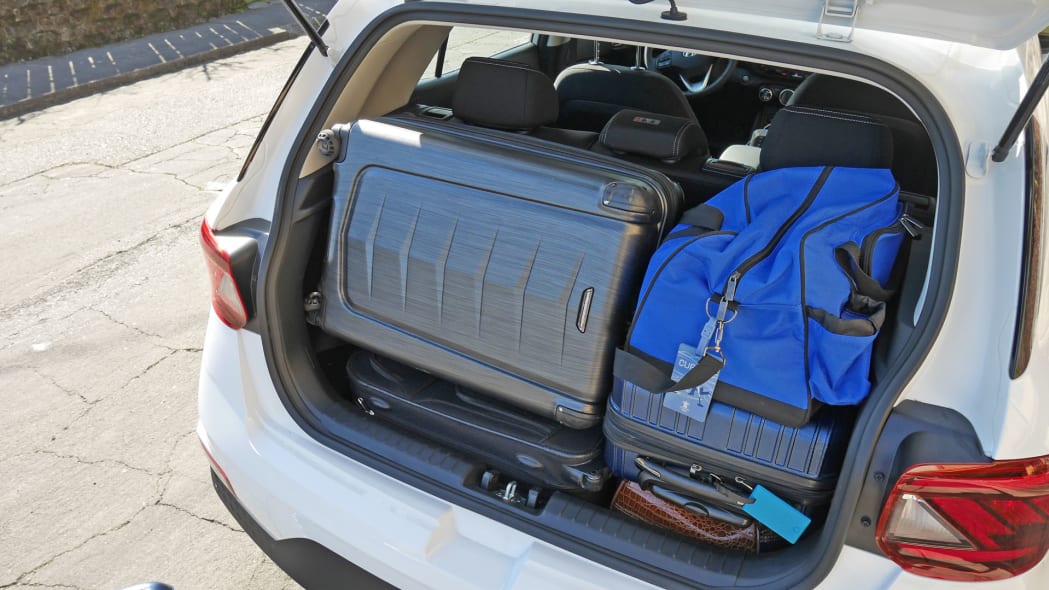 This really is an impressive amount of space for such a tiny vehicle.

Ah, but here is trick #2: the hide-away cargo cover. 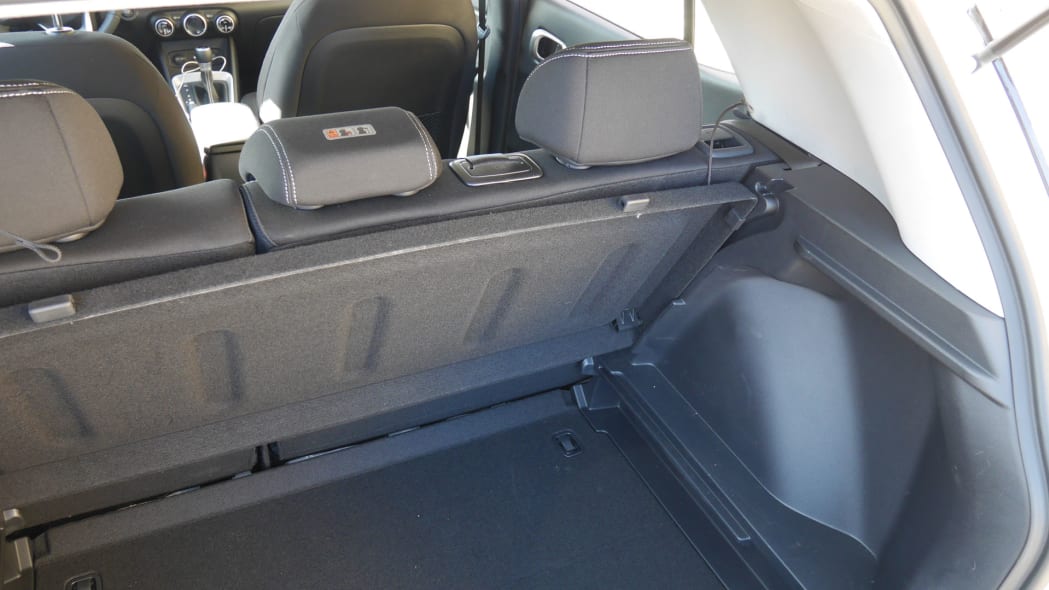 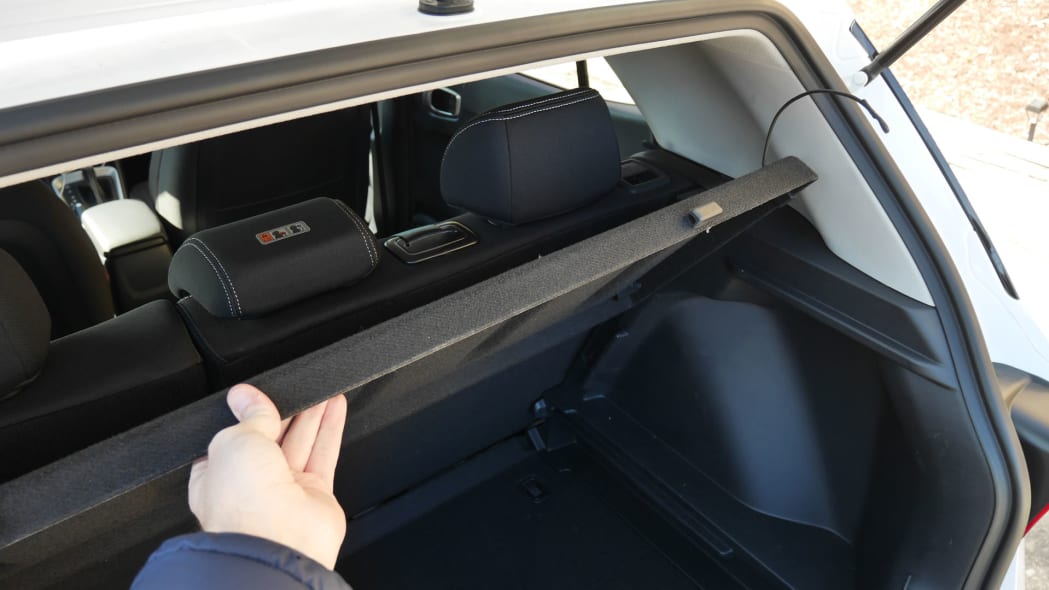 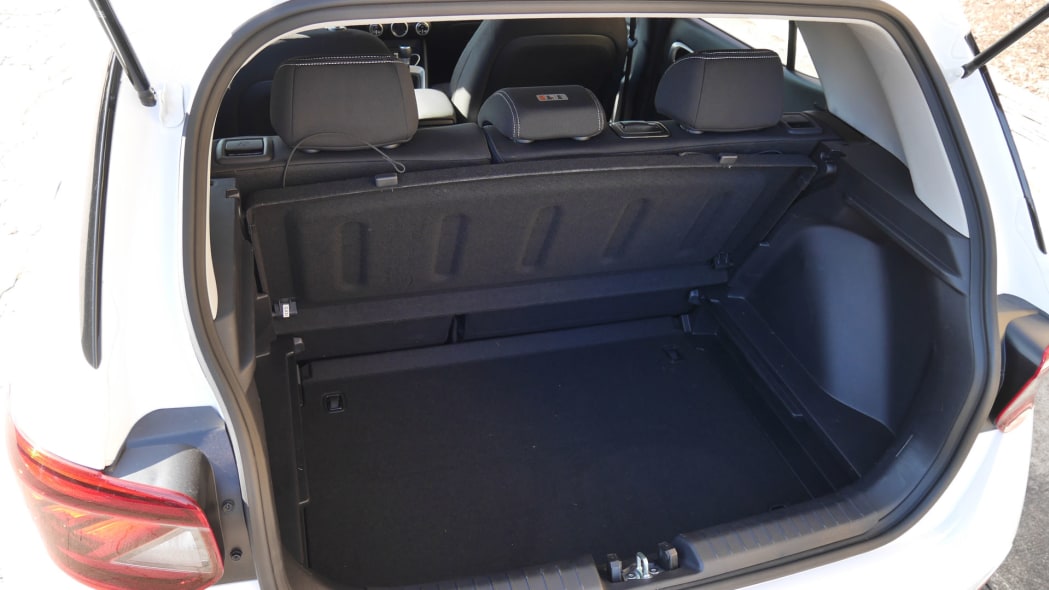 There's a channel that allows you to slide the cargo cover from its covering position to fitting parallel against the back seat. Brilliant, and here's why. Let's say you've gone to the airport to pick people up. They brought more than you were expecting and/or you forgot to remove the cargo cover, so where the hell do you put it? Most hatchbacks and SUVs with such a cover would greet you with a shrug. The Venue has an answer.

Now, it does eat up just enough space that some of the above bag configurations probably wouldn't work. Maybe you'd have to lose a bag. I didn't actually notice this feature until after loading all the luggage, so I don't know the difference for sure, but nevertheless, this versatility has to be commended. 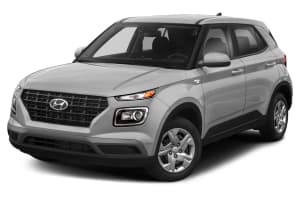