The Best And Worst Corvettes Of All Time

The Best and Worst Corvettes of All Time

The Corvette is one of the most iconic cars in American automotive history. Its genesis was way back in 1953 and the famous sports car is now on its seventh generation. It has remained a staple of American muscle and is perhaps the most recognizable car that the US produces.

Over the past 60 years, Chevrolet has produced a lot of Corvettes – more than 1.3 million across six generations, in fact. During that time, it has set the tone of the entire Chevy line and given the Americans a car to compete with the Porsches, Audis and Mercedes-Benzes that often dominate the sports car conversation. All in all, it has been and continues to be a very important vehicle.

So, in celebration of the Corvette, we’ve put together a list of what we feel are the best and worst of America’s sportscar. Click on through for a brief tour of the Corvettes that are the most memorable and those that are forgettable. Do you agree with the choices?

There are subtler ‘Vettes, if any of them can be called that. This is not subtle. It’s the embodiment many of Zora Arkus-Duntov’s most aggressive ideas about how a C2 should be that somehow got past the beancounters. It was the last year of its body style with a stupidly powerful 427, rated (with a wink) at 430 hp. It was closer to 550 hp, if not north of that some.

Only 20 were built in 1967, so there’s unicorn status to bolster the phenomenal performance – think upper 11-second quarter mile times, stock. The engine continued on in the new body style, but the ’67 was arguably the better combination.

This was the fuel-economy malaise at its worst. The standard 350 small block only kicked out 165 horsepower. That's the main criticism of this car, which is more of a criticism of the times. For a child of the 80s, the C3 Corvette was ubiquitous, and that made this body style seem pedestrian in comparison to its predecessors. Decades later, we actually like the swoopy yet taut silhouette. It also had a targa roof, which is pretty neat, too.  Still, the 165-hp output casts a dark shadow on this Corvette.

The 6.2-liter LT4 V8 deserves a Best Actor nomination, its 1.7-liter Eaton supercharger should win Best Supporting. It's never been so easy to pilot a square 650 horsepower and 650 pound-feet of torque, nor so enjoyable to do for hours on end. ?You need to spend at least $13,700 to find another car that can touch the Corvette Z06's performance, or $52,000 for a car that does as well and is as fun to drive.

Yet in both cases, you lose out on key parts of the Corvette Z06's package. I'll say it one more time for emphasis: at under $86 grand, Chevy is giving this car away. The 2015 Corvette Z06 isn't just "great for the price." It's just plain great. Period.

There's not much to like about the 1979 Chevrolet Corvette. Its engine was weak – just 195 horsepower in base L48 form – and it was still gliding through life on the same guts that first debuted way back in 1968. In automotive terms, that made the '79 'Vette a dinosaur. Car and Driver's contemporary test lavished it with such faint praise that its illuminated vanity mirror made the story.

Of course, that didn't mean that sales were bad. Far from it, in fact. Chevrolet sold a whopping 58,307 Corvettes in 1979, making it the most popular year of all. Which means there are still a bunch of these underpowered, underdeveloped, disco-era machines on the road today.
slide-1399892

The original muscle car era peaked in 1970, and although the Corvette didn't quite fit into that traditional formula, the sports car borrowed heavily from Chevy's muscular V8 engine catalog. The LT1 represented the peak of small-block performance in 1970, with forged engine internals, an aluminum intake topped with an 800-cfm carb, and the unmistakable sound of solid lifters.

Rated power was 370 horses, thanks in no small part to its 11.0:1 compression ratio. Sadly, things rapidly went downhill from here as the third-generation Corvette slowly slowed down as the 1970s progressed.

Before an all-time favorite campy car ad came out, Chevrolet planned to bring out the 4th-generation Corvette for the 30th-anniversary 1983 model year. Alas, it wasn't meant to be. Cars didn't go on sale until January 1983, which allowed the C4 Corvette to take a 1984 model year. The official reason for the delay was that extra time was needed to sort out production of the all-new design.

The legend handed down from the auto-journalist elders, though, is that pre-production 1983 models were a total mess with a spine-shattering stiff ride. Chevrolet wisely took a step back to get things right, and the rest is history. But to us, one of the worst Corvettes ever is the one that GM deemed not ready for prime time in an era rife with terrible cars.

This is the start of the Corvette's modern performance renaissance, the reason why the current Z06 kicks so much ass. In 2001, Chevy engineers took advantage of the light weight and extra stiffness of the slow-selling coupe model and made the hottest Corvette since the ZR1. They built a high-compression engine with new heads, pistons, and hot cam to make 385 horsepower and 385 pound feet of torque. (a year later output increased to 405 hp and 400 lb-ft). With extra goodies like the world's first production titanium exhaust, special suspension, and a unique short-ratio transmission, the Z06 set a new benchmark for affordable performance.

When these were new, the frightening acceleration created a humble appreciation for the car's traction-off, stability control-on safety net. The Z06 proved that the Corvette team could deliver world-beating performance, and people would line up to buy one. 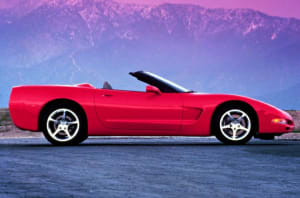 A pace car should look different from the run-of-the-mill production model on which it's based. We can also understand that to get that selling pace-car-edition replicas for the street is an easy way to ensure that collectors snatch up a few more cars. But do they have to look heinous?

Seriously, what's going on with this 1998 Indy 500 pace car in the foreground? This marks peak pace-car ugly, with its mustard-colored graphics, wheels, and seats. A total of 1,163 were made. It's not too late to recall them.

Though it barely looked it, the C4 ZR-1 was a very different animal underneath compared to standard Vettes of its time. Look closely and you'll see wider doors that meet up with wider rear bodywork to cover wider (11-inch!) rear wheels. It was the first C4 to wear squircle taillights and the convex rear fascia, although those changes were applied to the narrower base cars for 1991, finally making them somewhat attractive. This ZR-1's LT5 engine, designed by Lotus Engineering, had its own familiar differentness: it retained the 4.4-inch bore centers of a small-block Chevy V8 but used four cams running four valves per cylinder instead of pushrods, plus a variable intake runner that reduced power and fuel use at part throttle.

Early versions made 375 hp, and by the end of its run the engine was tweaked to produce 405. Lessons learned in building it were transferred to the LT1 that powered later base C4s. Lotus also helped out with the chassis, designing the car's unique FX3 suspension among other things. Oh, and the C4 ZR-1 was a favorite car to drive in the '90s computer game The Duel: Test Drive II.

Car Club USA travels to Bowling Green, KY to document the annual Corvette Homecoming, where owners travel from around the country to reconnect with the manufacturing birthplace of their vehicles. We follow two contestants in the Show and Shine competition to see if their Vettes are truly award-winning.