2015 Russian Grand Prix was full of crashes and DNFs

Jonathon Ramsey
Mercedes-AMG Petronas non-executive chairman Niki Lauda said of Lewis Hamilton's race-day domination this year, "The guy is driving like a god." Qualifying is another story, though – teammate Nico Rosberg taking pole proved that sometimes deities have to settle for second on the grid.

Williams driver Valtteri Bottas surprised himself and his team with third place, half a second behind Hamilton but 0.05 sec ahead of the first Ferrari driven by Sebastian Vettel, while a mistake on Kimi Räikkönen's final flying lap left him in fifth, 0.4 sec behind Vettel. The Sahara Force India team had a good showing, with Nico Hülkenberg qualifying sixth just ahead of teammate Sergio Perez in seventh. It's the first time they've had both drivers in the top ten on the grid since the 2014 British Grand Prix.

Romain Grosjean is leaving the stormy waters of Lotus at the end of the year for the unknown waters of Haas F1, but he made the shoestring operation look really good before Renault takes over by taking eighth place on the grid. Max Verstappen qualified well again with ninth in the Toro Rosso, ahead of the first Infiniti Red Bull Racing of Daniel Ricciardo in tenth. Red Bull driver Daniil Kvyat lined up eleventh for his home grand prix, certainly a disappointment after locking up fifth place on the grid last year in a Toro Rosso. 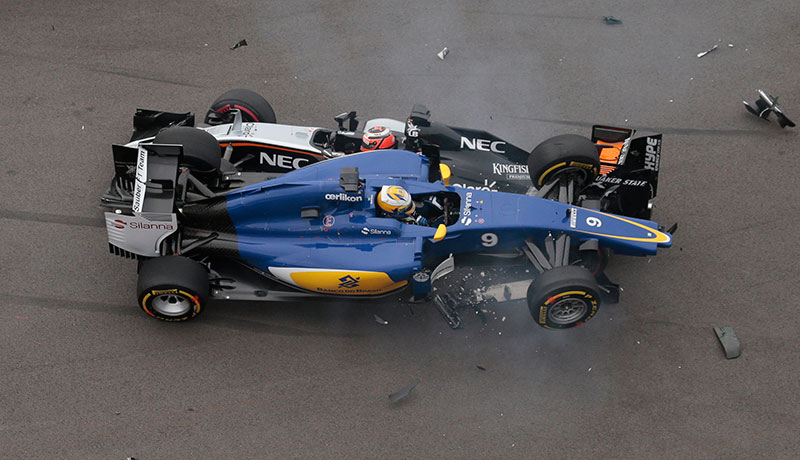 When Pirelli brought soft and supersoft compounds to Sochi, the company said it hoped this year's race would be better than last year's. We're sure this first-lap mishap isn't what they meant. Rosberg and Hamilton dragged it down to Turn 1, with Rosberg getting the inside line. Hamilton had to go wide at Turn 2 as Rosberg fought to hold position, but they left a mess in their wake: Hülkenberg spun going into Turn 2 and stopped in the middle of the track, and Marcus Ericsson in the Sauber – who'd started 16th – collided with him. Both cars were out of the race immediately, and the Safety Car came in.

The Safety Car returned to the pits on Lap 3 Rosberg led the field, but just two laps later the German complained of a sticking throttle pedal. Two laps later he had to retire, unable to drive the car properly. That put Hamilton at the front, and we've seen that race a bunch of times before. He built a double-digit lead and never lost it. The only blips in his race were dealing with another Safety Car period after Grosjean's Lotus slid hard into the barriers on Lap 11, and a rear wing issue that prevented him from using his DRS system – as if he needed it. 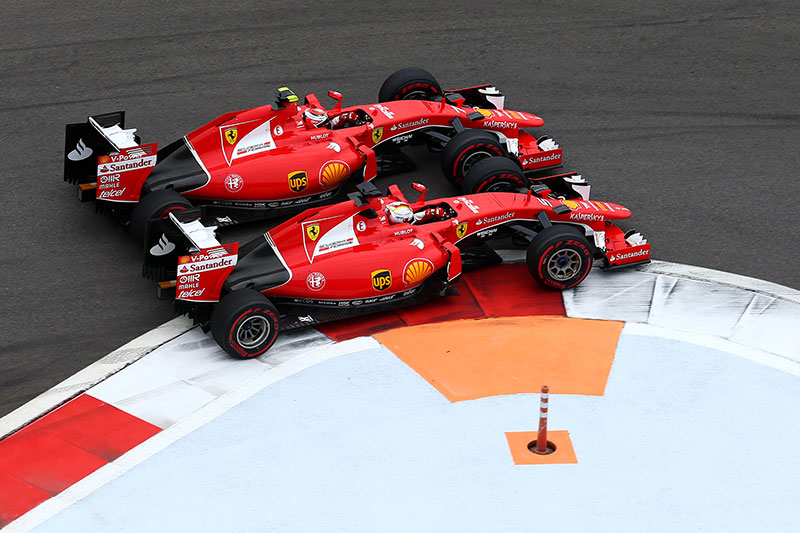 Sebastian Vettel grabbed another second place for Ferrari thanks to pit strategy and traffic. After getting around teammate Räikkönen on Lap 17, the German was been stuck behind Bottas' Williams in the opening stint until the Williams pitted on Lap 27. Vettel lit up a series of hot laps while Bottas had to fight his way through traffic after his pit stop. When Vettel pitted on Lap 31, the undercut worked, slotting him into second.

Third place was a shocker, for several reasons. Sergio Perez got on the podium for Force India, the team's first podium since Perez scored a third place at the 2014 Bahrain Grand Prix. The Mexican pitted on Lap 13 during the second Safety Car period after Grosjean's accident, so his tires were nearly 40 laps old during the final two laps of the 53-lap race. Bottas had been closing in on him for a while, with Räikkönen close behind, and both Finns finally got around him on Lap 52. That's when Bottas' engineer told him to turn his engine up to Mode 1 in order to keep Räikkönen behind him for the last lap-and-a-bit. 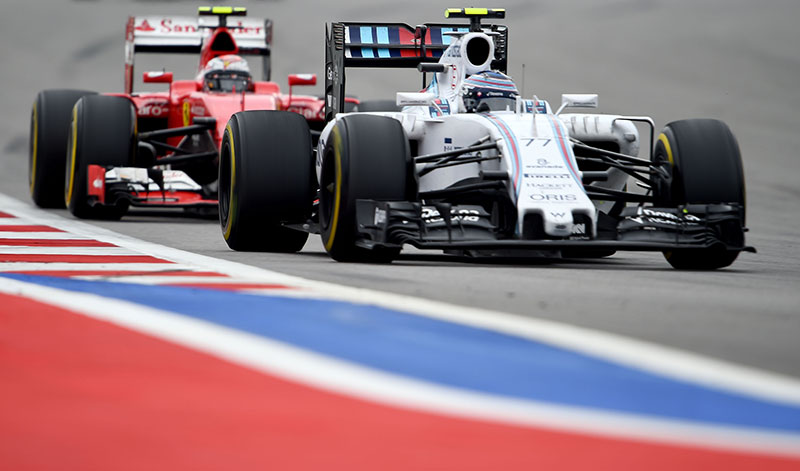 At Turn 4 on the last lap, Räikkönen tried to make a pass on Bottas seemingly all the way from Moscow. While the Ferrari driver ignored the braking zone and dove for the apex, Bottas (having no idea Räikkönen would try something from that far back) turned in for the corner as usual and clobbered the Ferrari. Bottas spun into the barriers and was done, Räikkönen throttled his injured steed around the track to the finish, but Perez passed him to retake third place. Räikkönen would cross the line in fifth but the stewards issued him a 30-second time penalty, dropping him to eighth in the final classification. 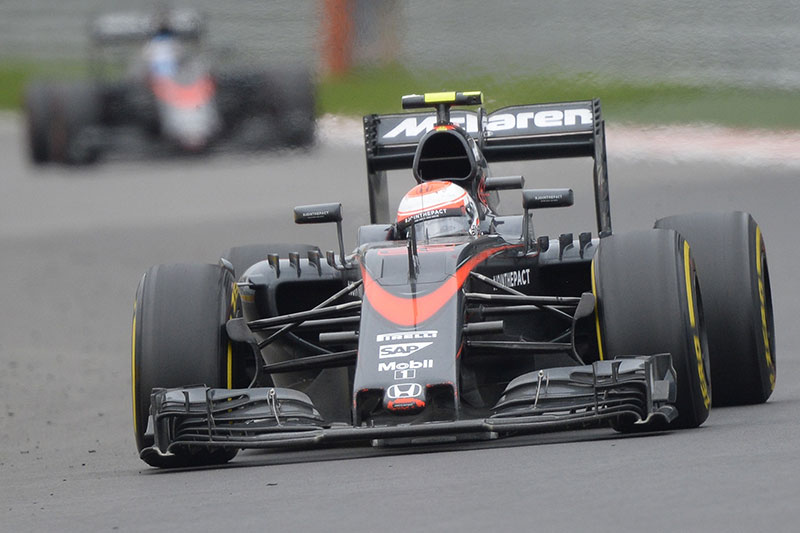 Thanks to the attrition and a fight through the wilderness, Felipe Massa finished fourth. The Brazilian was hardly a factor throughout the event, in sixth place on Lap 17, in ninth place on Lap 36, back in sixth on Lap 49. The same held true for every driver behind him in the top ten save for Räikkönen and Max Verstappen. Kvyat made up six places from his grid position to finish in fifth, Felipe Nasr took sixth, Pastor Maldonado took seventh, and Jenson Button in the – gasp – McLaren scored ninth place. Fernando Alonso finished in tenth, which would have put both McLarens in the points for the second time this year after Hungary this year, but the Spaniard was docked five seconds for exceeding track limits too often at Turn 16, dropping him to 11th.

For Verstappen, it's not a race if he doesn't have to come from the very back of the field. The Dutchman got hit by Hülkenberg during that Turn 2 incident came away with a flat tire. He limped around the track, came out of the pits and then cut his way through to ninth place at the checkered flag. However, of the 20 cars that started, only 14 were classified as having finished, and that includes Bottas who was given 12th place ahead of the Manor Marussias even though the Finn's race ended 12 corners before the end of the race. 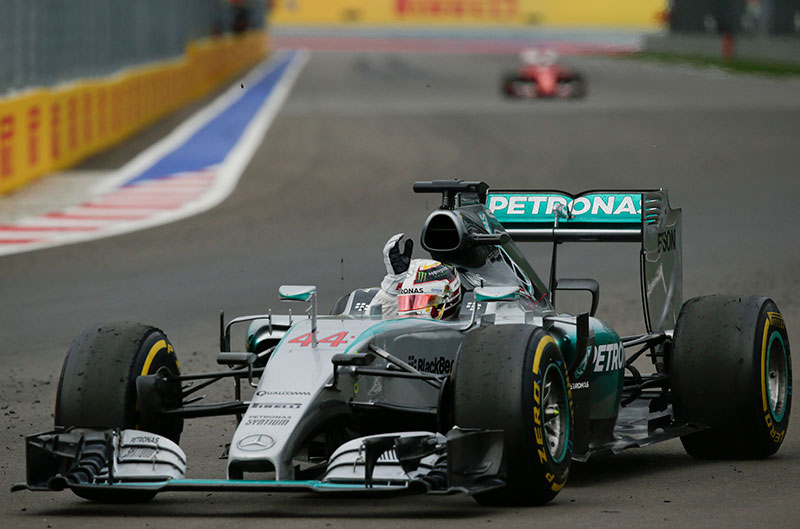 The win gives Hamilton 302 points in the Driver's Championship, which is 66 points ahead of new second-place man Vettel, who leapfrogged Rosberg because Rosberg's retirement stuck him with a total of 229 points.

Hamilton's victory and Räikkönen's penalty means that Mercedes-AMG Petronas has won the Constructor's Championship for the second year in a row and at the same place they clinched it last year. If Ferrari can maintain the progress they've made this year, the 2016 Constructor's battle might not be a simple question of, "How many races will it take Mercedes to win it?"

The next race is in Austin in two weeks. If Hamilton finishes seventh or higher in Texas, he wins it all. Yet with four races and 100 points left to earn, Vettel and Rosberg are still in the fight assuming Hamilton scores less than nine points from now to the end of the season. Which is totally possible, right?