Race Recap: 2015 Hungarian Grand Prix is Magyar for 'What a race!' Every driver on the Formula 1 grid dreams of taking home the silverware, but only one driver each year can do it. Barring disaster in 2015 it looks like it's going to be Lewis Hamilton. The Brit has been so dominating at the front of the grid on Saturday, we can't see how he'll miss out on winning the second annual FIA Pole Position Trophy. That's the accolade introduced last season in another manufactured attempt to give drivers something to work for on Saturday, since the FIA felt leading into the first corner didn't have the pull it used to.

Hamilton took his ninth pole of the season in Hungary for Mercedes-AMG Petronas with a crushing lap that put him almost six tenths ahead of his teammate Nico Rosberg in second. All Hamilton needs is one more spot at the top of the grid this season, and he's the Pole Position trophy winner. Thrilling stuff.

Behind Rosberg the gaps stayed smaller, Sebastian Vettel in the Ferrari a little more than a tenth behind Rosberg, Daniel Ricciardo in the Infiniti Red Bull Racing less than four one-hundredths behind Vettel. We feel almost as vexed watching Kimi Räikkönen as he feels driving – he's finally got a good Ferrari, now he can't get a good weekend. The front wing broke on his car in Free Practice 1, then a water leak in Free Practice 3 robbed him of setup time on the soft tire. He lines up in fifth about two tenths behind Ricciardo.

The slow, tight Hungaroring didn't agree with the Williams chassis, Valtteri Bottas the first of the Grove team drivers in sixth, his teammate Felipe Massa two places back. Between them is Daniil Kvyat in the second Red Bull in seventh. Teenager Max Verstappen put in a good showing in the Toro Rosso to grab ninth, while Romain Grosjean in a wriggling, squishy, sliding Lotus classified his appearance in Q3 at all as "a miracle." 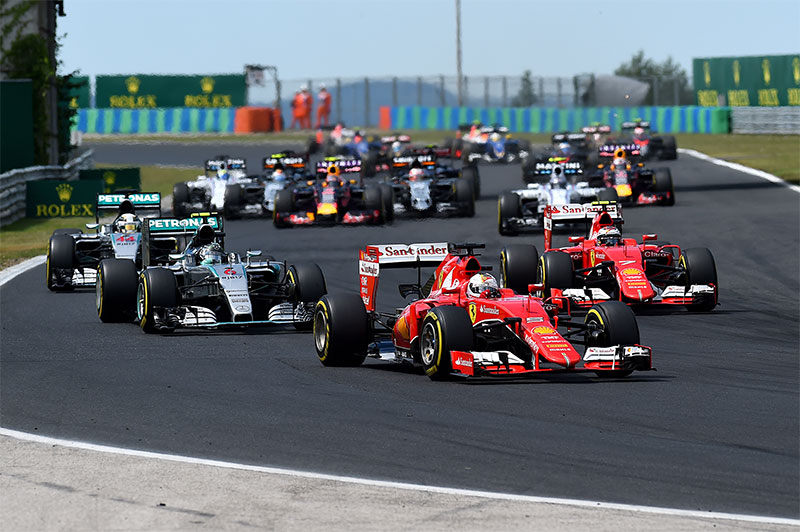 As for the race that followed, we don't expect to see another like it for a long time – it was the real thrilling stuff, one shock after another. The drama began after the first parade lap, when Felipe Massa lined up out of position and the start was aborted. The drivers did another parade lap, then lined up with everyone in place.

Mercedes got swamped as soon as the lights went out. Vettel ran around both of them and led the race into the first turn, Räikkönen had come from fifth to third by Turn 1, then got the inside line on Rosberg through Turn 2 to take second place. Ferrari Technical Director James Allison said before the weekend that Ferrari's gap to Mercedes should start closing now and through the rest of the season. The idea of it never came up until Sunday; before that everyone talked about the challenge from Red Bull. 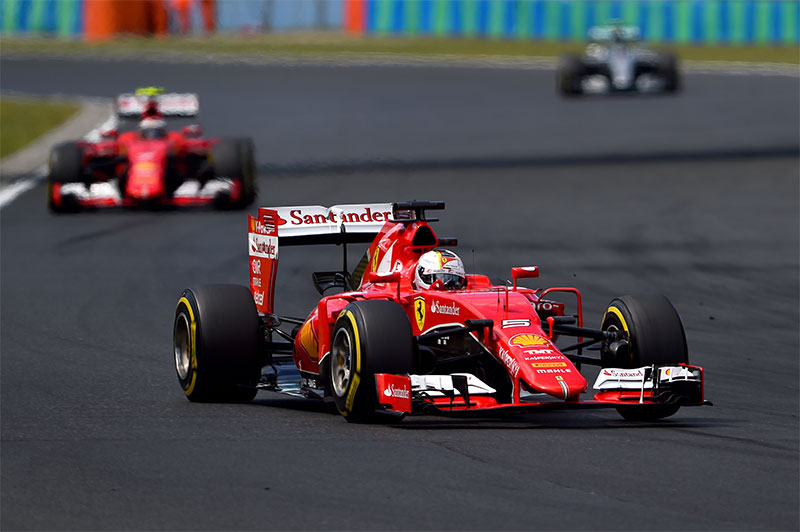 That script flipped as soon as Vettel and Räikkönen got into clear air and pulled away from everyone. By Lap 9 Vettel was two seconds ahead of his teammate, 5.4 seconds ahead of Rosberg, the gap increasing from there. They didn't even look like they were working hard. In fact, they looked like we're used to Mercedes looking, only they were Ferrari.

Vettel had a quiet race at the front until the Safety Car came out on Lap 49. Nico Hülkenberg lost his front wing on the front straight – it simply fell off and shattered underneath his car – so the marshals had to come out and clean the track. At the restart, Vettel pulled away again, unruffled, and finished the race in first place nearly 16 seconds ahead of Daniil Kyvat in second. 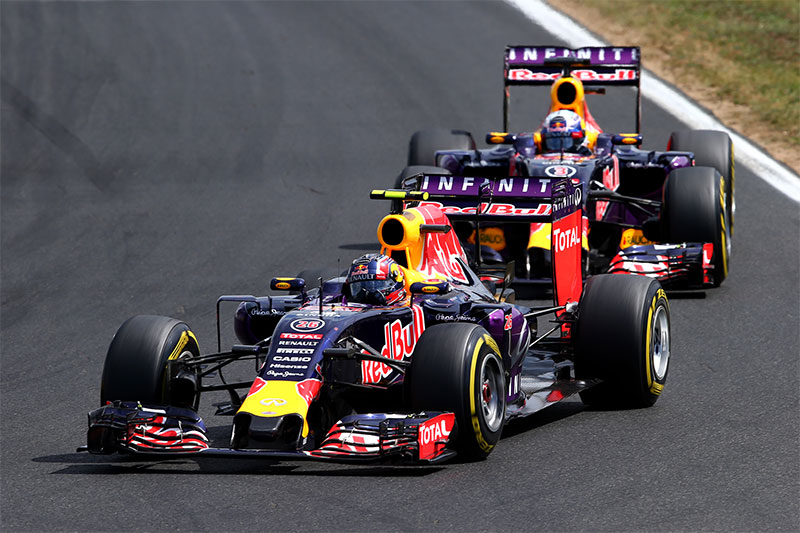 Kvyat's second place is the Russian's first podium with Red Bull since joining the team this season, and he'll be glad to get that out of the way. He started the race complaining about his car being undriveable, and when he couldn't get past Hülkenberg in the first eight laps his team ordered him to let his teammate by. After that, Kvyat spent the next few laps "turning the radio blue" complaining about having to move over for Ricciardo. After his first pit stop on Lap 14 he ran almost the entire race at the bottom of the top ten – he didn't get into the top five again until Lap 55, just 14 laps from the finish. Even though he had to take a penalty for gaining an advantage, his winning strategy for the day was not hitting anyone. That meant he was there to take advantage when everyone else ahead hit trouble, and a second-place finish came calling.

Teammate Ricciardo took the final step on the podium after an adventurous last quarter of the race. The Aussie was in fifth place when the Safety Car came out. When racing resumed he grabbed fourth place by passing the perpetually unlucky Räikkönen with a dive into Turn 1, the Finn on his way to retirement from a certain second place with an MGU-K problem. That left Vettel and Rosberg in front of Ricciardo. The Red Bull driver tried the same move on Rosberg, shooting kamikaze style underneath at high speed from way way back, locking up, and going wide. Rosberg swung out at the corner exit and the German's left rear tire hit Ricciardo's front wing, flatting the tire and demolishing the wing. Ricciardo came back to the pits for a new wing, Rosberg limped around and got a new tire. 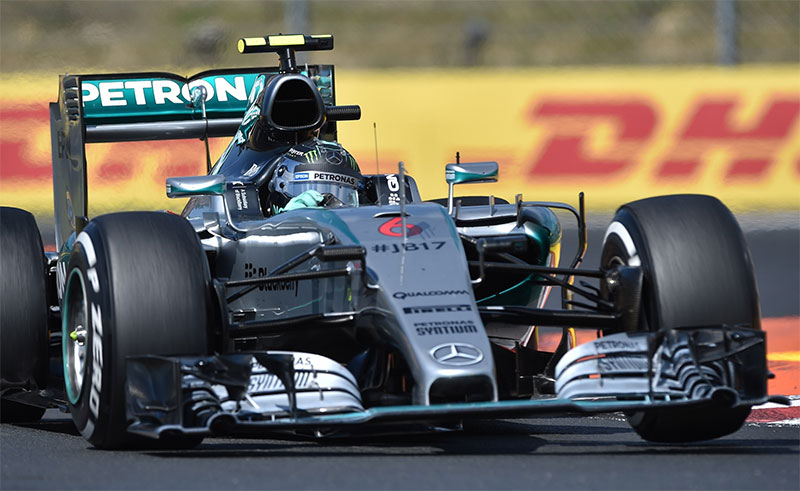 The crazier part of that incident was that up until that moment, with Hamilton out of the points in 13th place, Rosberg led the Driver's Championship by one point on the road – he'd have gone into the summer break atop the standings. Rosberg emerged from the pits in ninth, behind Hamilton, and further back in the standings. He'd finish the race in eighth. Many have questioned Rosberg's choice to use the medium tire for his last stint because he thought that's what Hamilton was doing. If he'd used the soft tire, which everyone expected, he'd have been more than a second faster per lap and probably could have avoided Ricciardo, and might have passed Vettel. The theory was that Rosberg didn't like his balance all weekend so the soft tire didn't mean that much to him. 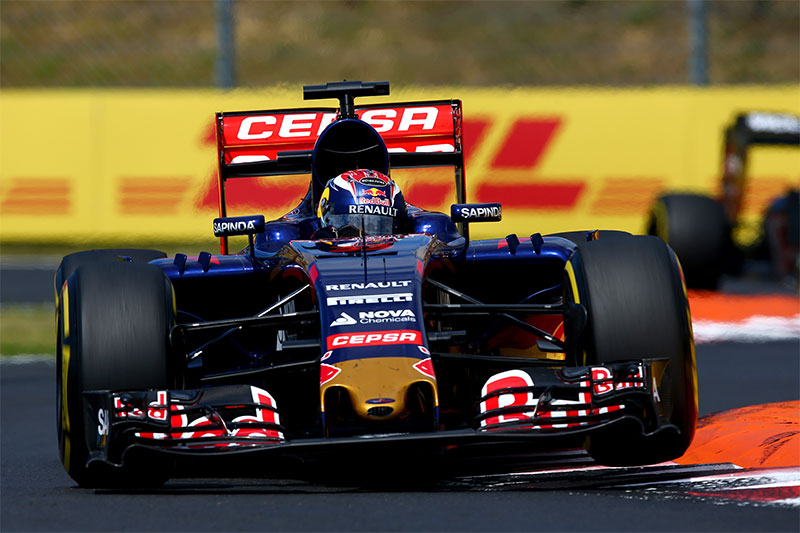 Max Verstappen finished in fourth, his best finish by far all season. The Dutchman, like Daniil Kvyat ahead, Fernando Alonso who finished behind him in fifth, and Romain Grosjean who finished in seventh, kept it clean all race except for a minor incident with Valtteri Bottas that left Bottas off the worst, and mopped up around the carnage. We might have seen Verstappen, Alonso, and Grosjean for a combined twenty seconds for the entire race, and most of that was replays of Grosjean incidents, that's how little action they were involved in. But it was that kind of race. 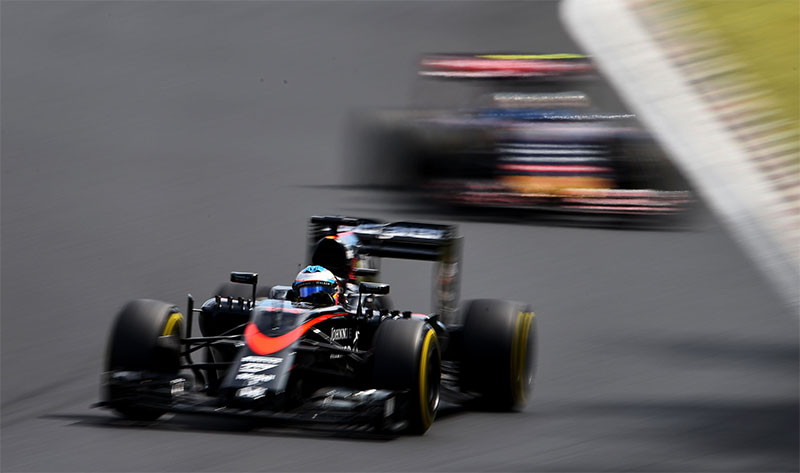 Fernando Alonso put his McLaren in the points for the second race in a row. The Spaniard said it was time for the team to start showing some progress, just a day before he'd end up having to push his car down the pit lane when a battery failure brought the car to a stop in Q2. This race was the first time ever that McLaren didn't get one of its cars in the top ten of the starting grid at Hungary. Jenson Button finishing in ninth made it a double points finish for McLaren. It's too early to say the Woking team has turned it around, but everyone there has got to be celebrating the milestone in what was Honda's 350th grand prix as an engine supplier. 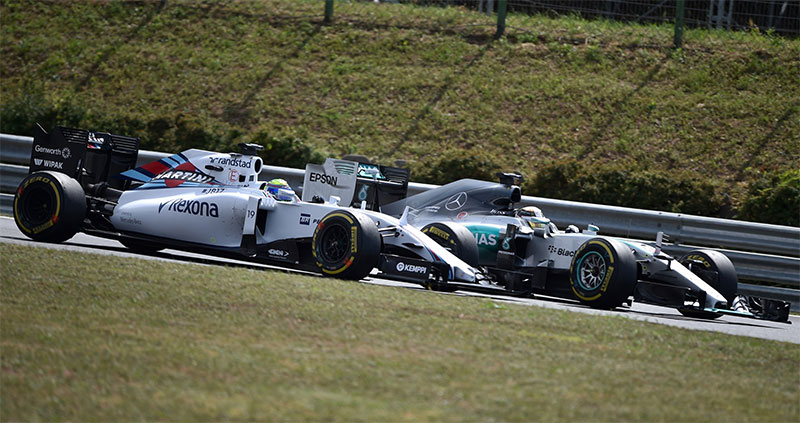 Hamilton claimed an extraordinary sixth place after "a bad day at the office." So bad, in fact, that he apologized to his team for his entire race. He got mugged at the start and ran through the gravel trap at the chicane on the first lap. He did even worse in the Safety Car restart, falling from fourth to seventh, clobbering Ricciardo through Turn 1 and taking a drive-through penalty for it, running off the track at Turn 4, then having to fight his way back up from outside the top ten.

The last points position went to Marcus Ericsson, getting his Sauber home in tenth. 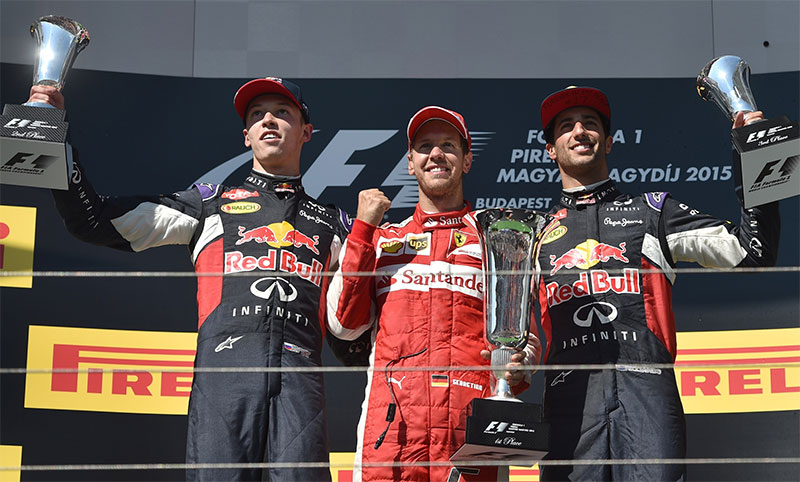 Ferrari hadn't won a Hungarian Grand Prix since Michael Schumacher did it in 2004. Vettel had never won a Hungarian Grand Prix. This, his 41st F1 win, puts him level with Ayrton Senna. It's the first time in the V6 era that a Mercedes hasn't been on the podium. It's the second time all season that Williams didn't score a single point. Pastor Maldonado earned three penalties for three different infractions. Five drivers were handed penalty points after the race: Maldonado, Grosjean, Hamilton, Verstappen, and Kvyat. McLaren more than doubled its point total for the whole season so far in this one race.

In the driver's standings, Hamilton stays on top with 202 points, Rosberg in second with 181, Vettel in third with 160. On the constructor's side, Mercedes rules the roost with 383 points, ahead of Ferrari with 236, and Williams with 151. Hungary gave us the perfect race to slide into the summer break with. We'll see you in three weeks, when the season picks up at Spa.