Plus, Toyota adds Android Auto to every 2021 Corolla

The 2021 Toyota Corolla Apex Edition is happening, so … get excited? We’re not entirely sure how to feel about this little sedan yet, but it sure is attention-grabbing. As the name would suggest, this Corolla should feel more at home than others on a twisty backroad or an autocross course.

To do this, Toyota has implemented some worthwhile mechanical upgrades. It’s based on the sportier SE and XSE grades of the Corolla, but Toyota says this one has a “track-tuned” suspension. Unique coil springs lower the ride height by 0.6 inch, and newly tuned shocks increase the damping force to fight roll. It also has new solid stabilizer bars in front and back to keep the car even flatter. Toyota says it has new jounce bumpers to maintain a comfortable ride quality with the stiffer suspension components. All in, Toyota claims roll stiffness increases by 47 percent in the front and 33 percent in the rear.

In addition to the suspension work, Toyota is offering an optional summer tire (all-seasons are standard) to wrap light 18-inch wheels — Toyota says these wheels represent 2.2 pounds of mass reduction per wheel over the SE. The glossy black wheels are also specially designed to bring in more air and cool the brakes. The power steering has been re-tuned for a “sportier” response. And to top it all off, Toyota says it’s fitted a newly developed cat-back exhaust system that’s noticeably louder than the standard exhaust.

Under the hood is the same 2.0-liter four-cylinder that powers the Corolla SE and XSE. It makes 169 horsepower and 151 pound-feet of torque in this guise, which is enough to be peppy, but never quick. Toyota says the Apex Edition will be available with a six-speed manual transmission, but it’s only going to make 120 of them in this exact spec. A total of 6,000 Apex Editions will be made, so the other 5,880 will be equipped with Toyota’s CVT (sad trombone). 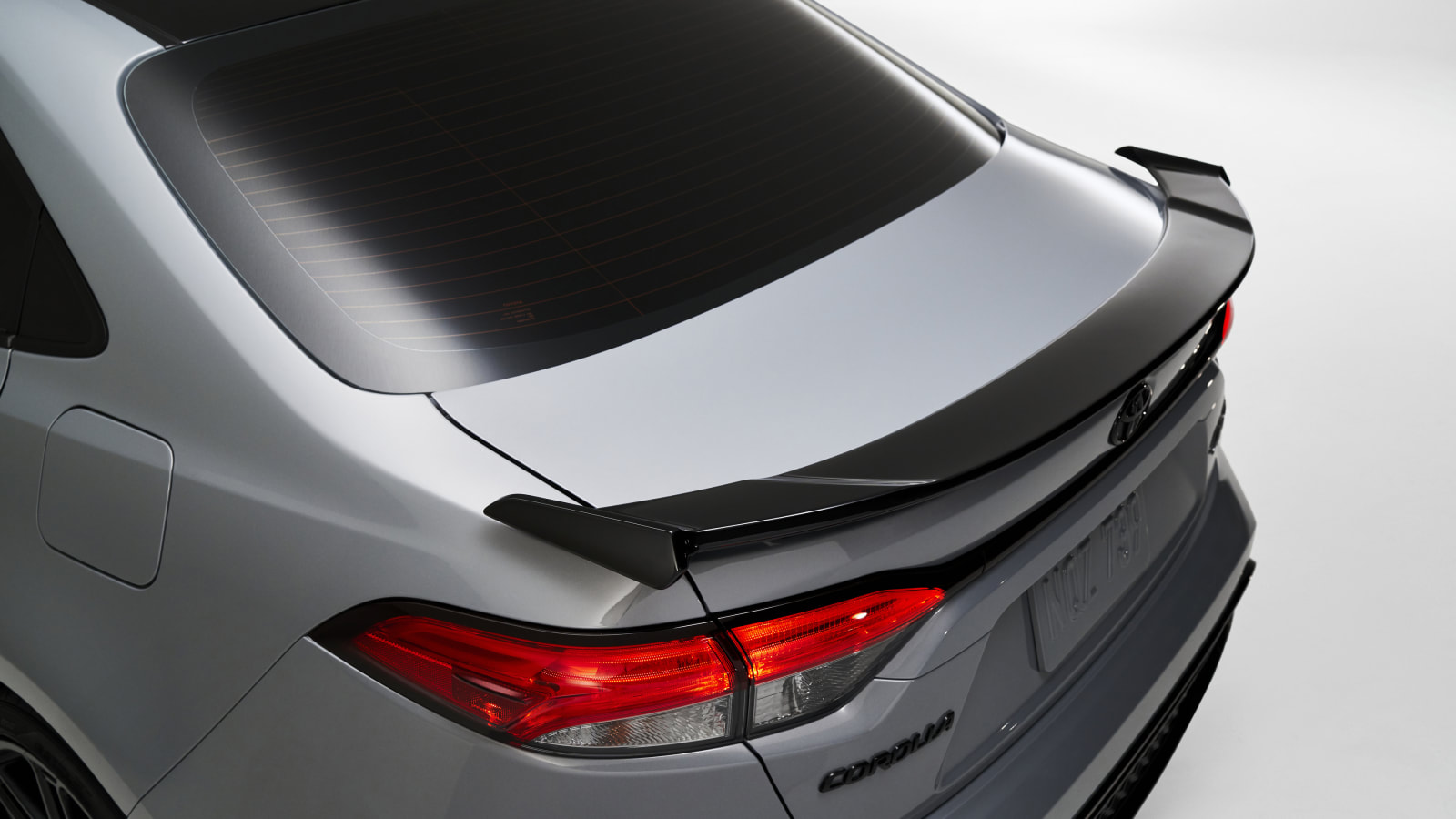 You’ll definitely see it coming. There’s a full blacked-out aero kit with bronze accents everywhere on this Corolla. Want a wing? You got it (it’s optional). Big front spoiler? Yep, it’s there, and so are the black side skirts and rear diffuser. It’ll be available in three colors: Cement, Super White and Black Sand Pearl. All will have a black-painted roof. Inside, the Apex Edition gets black seats with bronze stitching and a neat checkered flag pattern in the fabric. The bronze stitching can be found throughout the cabin, as well.

As for the rest of the 2021 Corolla lineup, it gets a few updates, too. All models gain Android Auto functionality. The sedan adds rear side airbags, and blind-spot monitoring with rear cross- traffic alert becomes standard on XLE and XSE models. Finally, every new Corolla gains an automatic engine shutoff feature that will turn the engine off after a set period of inactivity.