Filling every black void: every cupholder, cubby and crevice

Everything you're about to see and read about the 2020 Honda Pilot and its interior storage applies to every trim level. However, this test was conducted on the new, range-topping Pilot Black Edition, which as the implies, blacks out virtually all exterior trim and makes the wheels black. Inside, since everything's awfully black to begin with, red is added to the seats and center console tray/cover.

To fully immerse myself in the mindset of a Black Edition owner, I dressed entirely in black (also, why not?) and brought along some suitably black beverage containers to fill the 16 cupholders. Oh and my wife's black purse. She's not using it these days anyway; didn't notice it was gone. 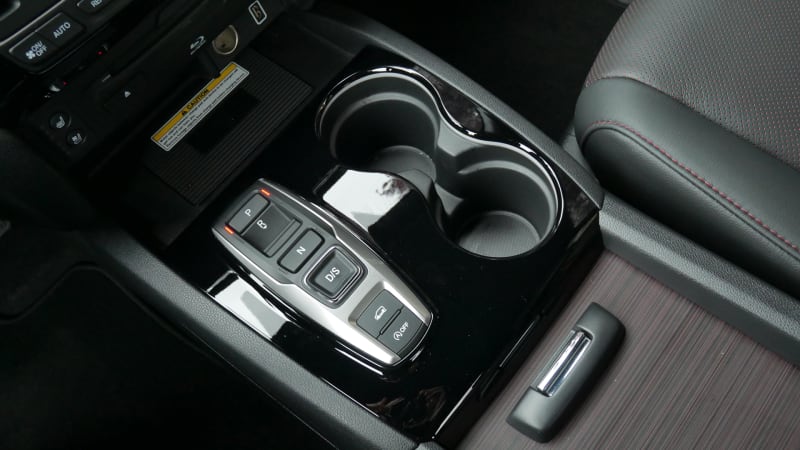 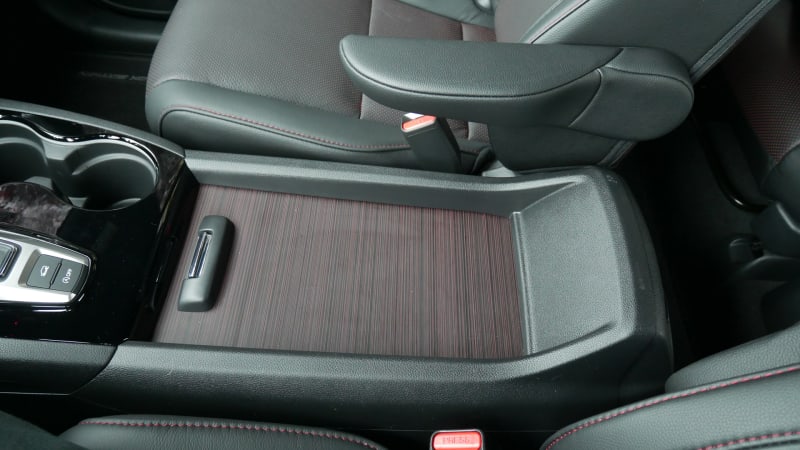 Here is the center console, which on the Touring, Elite and Black Edition has the electronic shifter tied to their nine-speed automatic. The amount of space it takes up is the same as the mechanical shifter found in other trims with the six-speed, which makes you wonder why they even bothered (they shouldn't have, it's annoying to use).

Let's start with the center console bin (above right), which is the most noteworthy thing. You'll note how much lower this is compared to a typical center console bin that is covered by an elevated armrest. Instead, the Pilot has adjustable armrests attached to each front seat (below left), freeing up a large, flat space with bumpers on each side to prevent whatever's placed there from flying away. I could easily see someone placing their purse here; I've frequently placed a hat and/or sunglasses there.

I should also use this opportunity to mention that the Honda Passport and Honda Ridgeline have the same storage in their two seating rows. 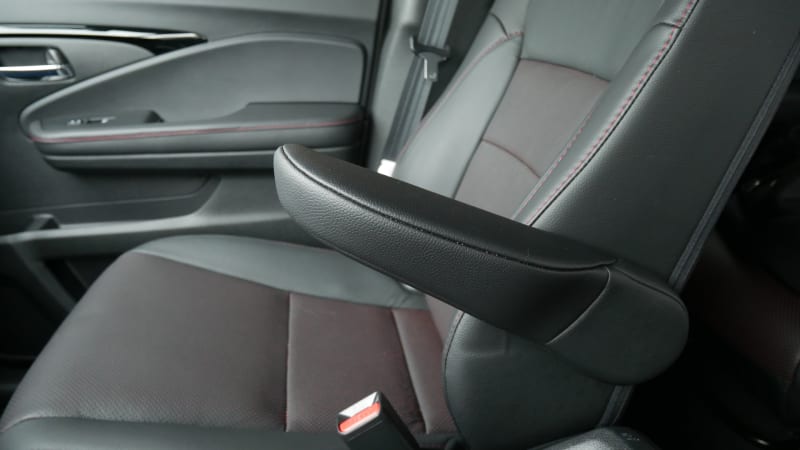 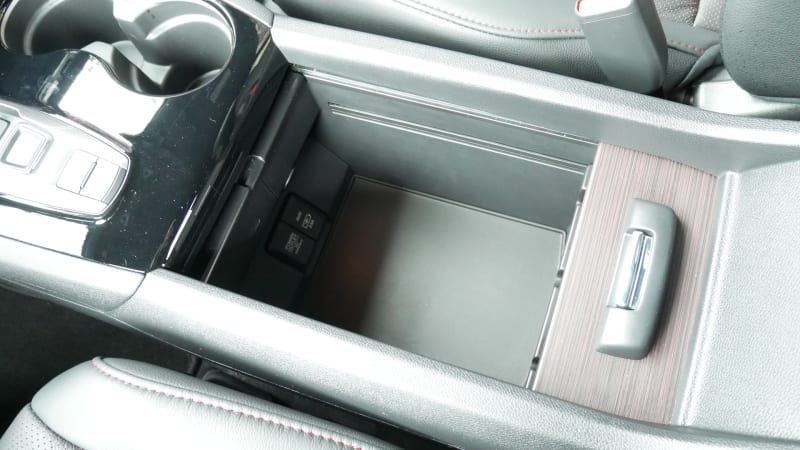 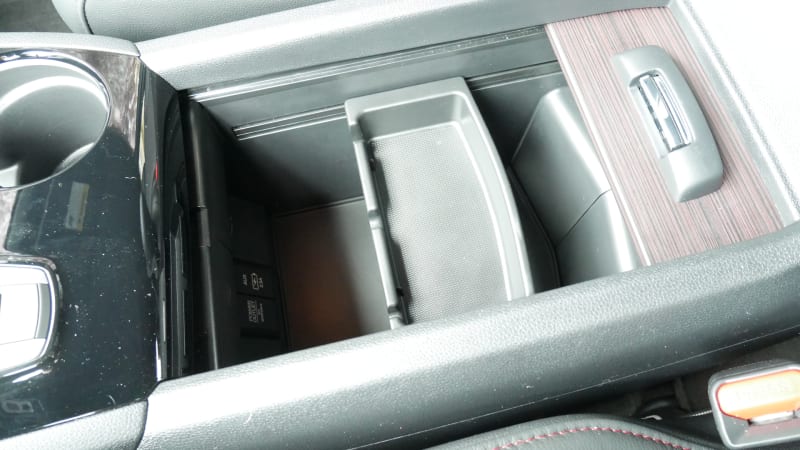 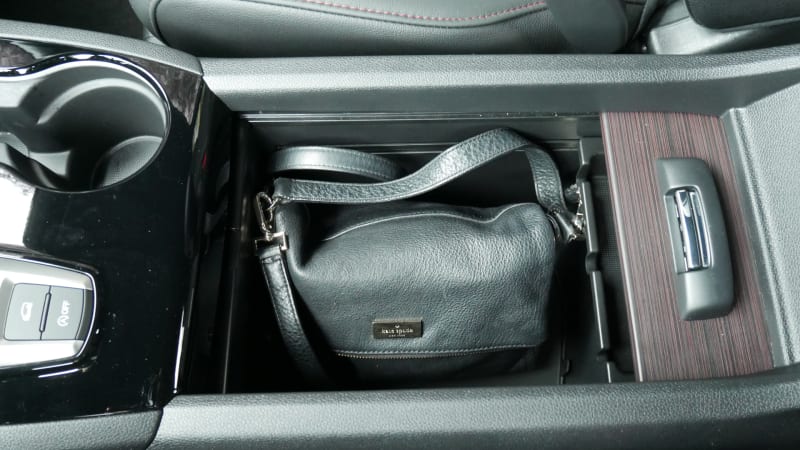 That big, flat space is a garage-door-style rolling cover that slides back to reveal a huge amount of space that easily swallows my wife's purse and closes over it. Besides keeping your purse (or whatever) out of the way while driving, it also provides a covered, secure place to keep it out of prying eyes should you want to leave it in the car for some reason.

There is a little sliding tray (above left) that goes back and forth to create a little extra versatility. It slides all the way back and completely out of the way from objects in the bin below.

Finally, there is a USB charge point and cigarette-lighter-style power point inside the bin. 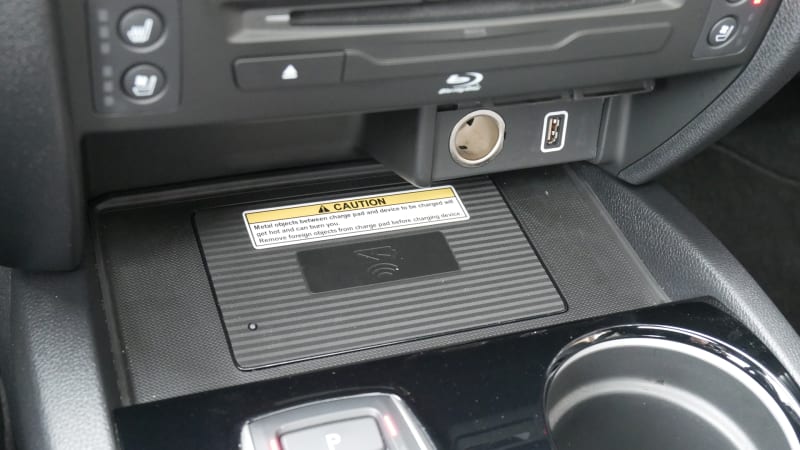 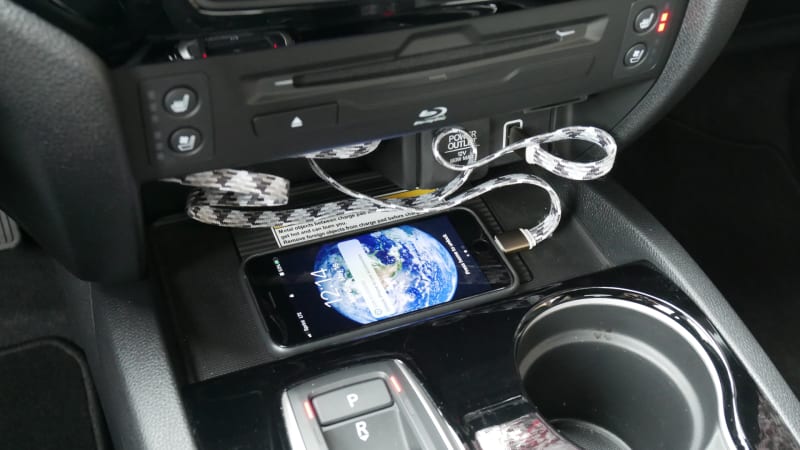 The Elite and Black Edition trims are the only Pilots that include wireless smartphone charging. Unlike the CR-V, this tray is the same size with or without wireless charging. Also unlike the CR-V, your phone won't go flying from it when cornering.

Alright, lets get to those 16 cupholders. 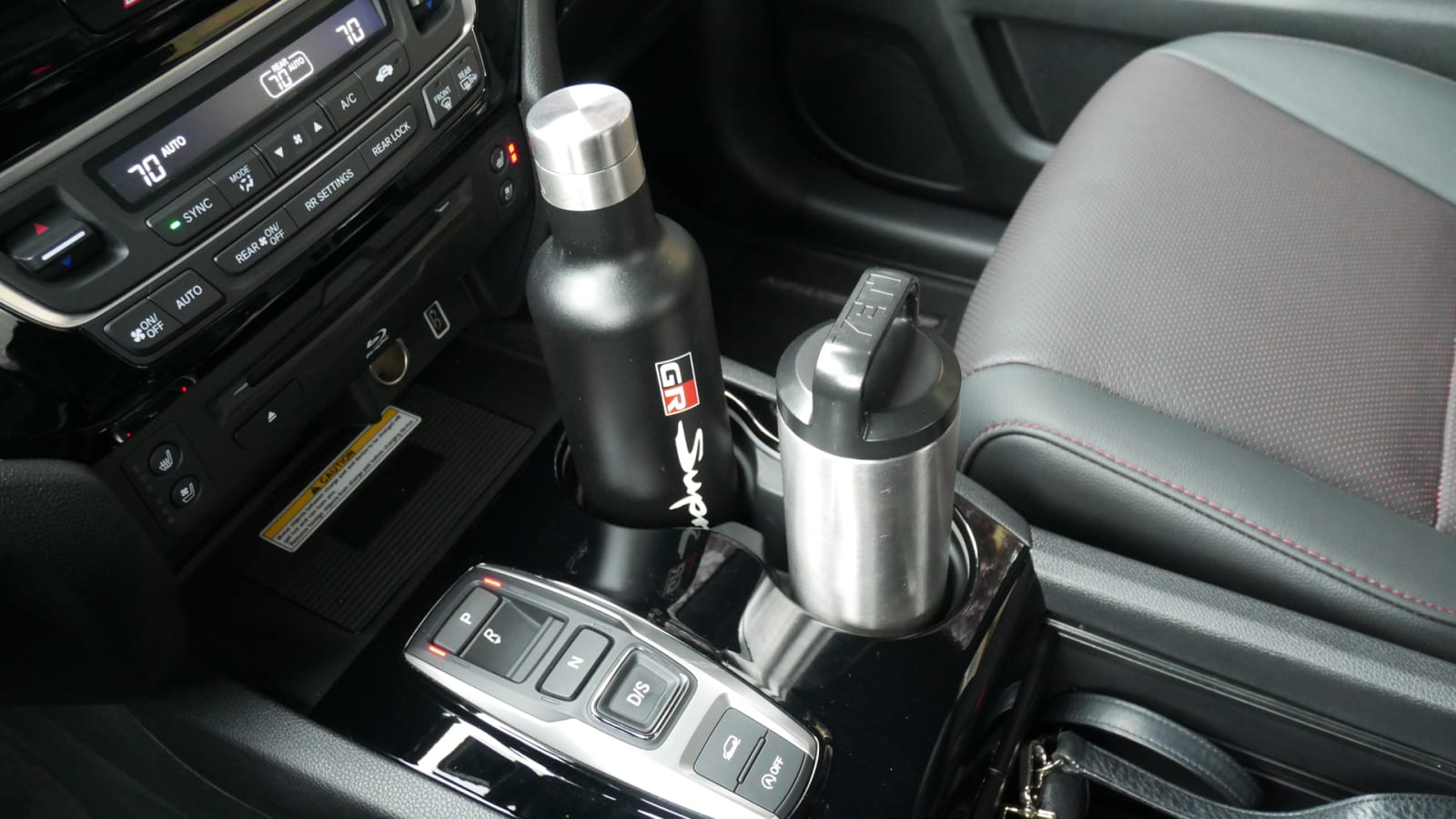 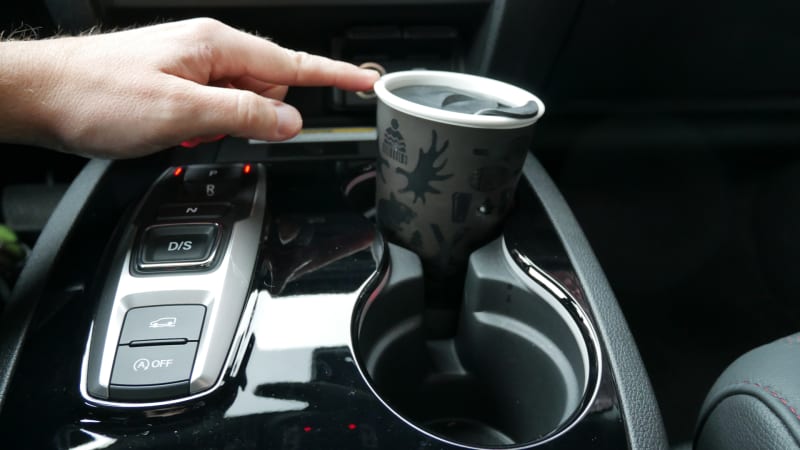 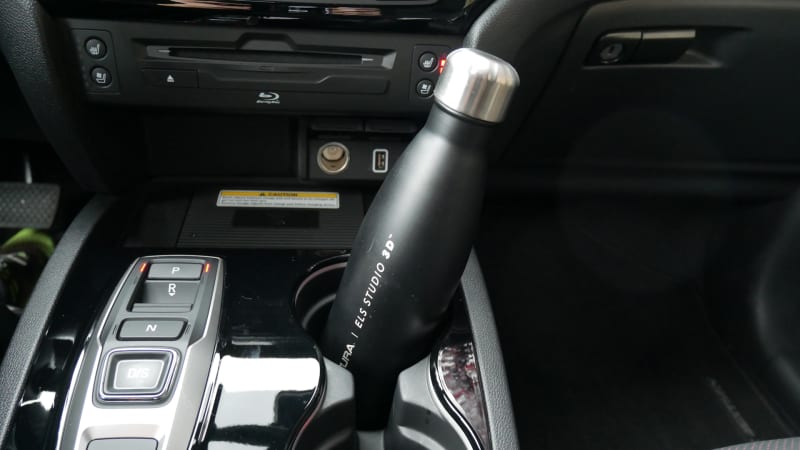 The big Yeti bottle is the same I've used previously and doesn't always fit in cupholders. It does so easily here. That jumbo, wine-bottle-sized GR Supra bottle (black of course) is even wider and taller. It actually fit here, which is impressive. It's also the only cupholder inside the Pilot where it fit, so that's the last you'll see of that.

Above left demonstrates the amount a standard-size travel coffee mug (black of course) will move in this cupholder. Very little. There's also a little gap between each cupholder, which enhances its usability as an alternative storage solution.

On the other hand, a taller and narrower bottle like this Acura/ELS Studio one (black of course) tilts quite a bit. It won't flip out, but it'll also be flopping about a lot. That's annoying.

Thankfully, there are other choices up front. 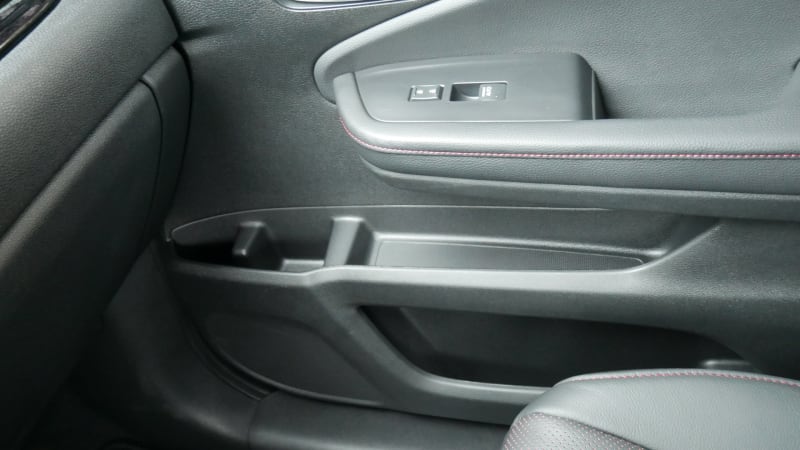 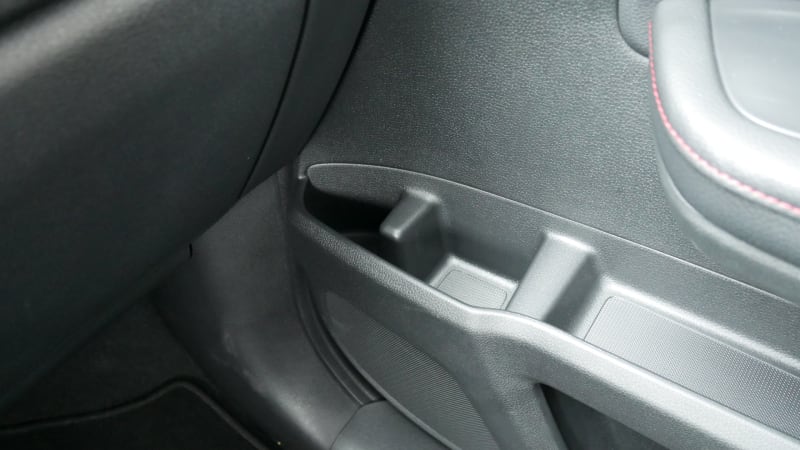 The front passenger doors have two-tiered storage bins. The box area (above right) is actually big enough and secure enough for bottle and mug duty. A Fiji Water bottle or a small milk carton would really be right up its alley. 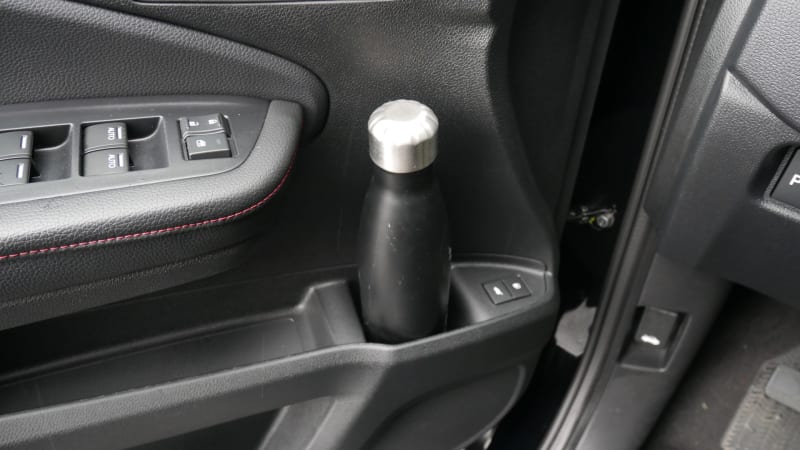 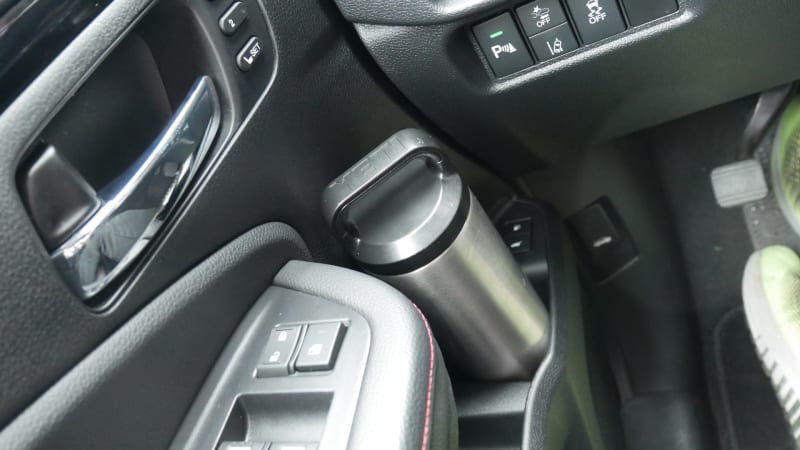 The Acura/ELS bottle is far more secure here, and yet, the thicker Yeti bottle still fits. Also, this cupholder is much higher than typical for those mounted in a door and therefore easier to reach.

Before we head into the back, here's the requisite picture of an unremarkable glovebox. 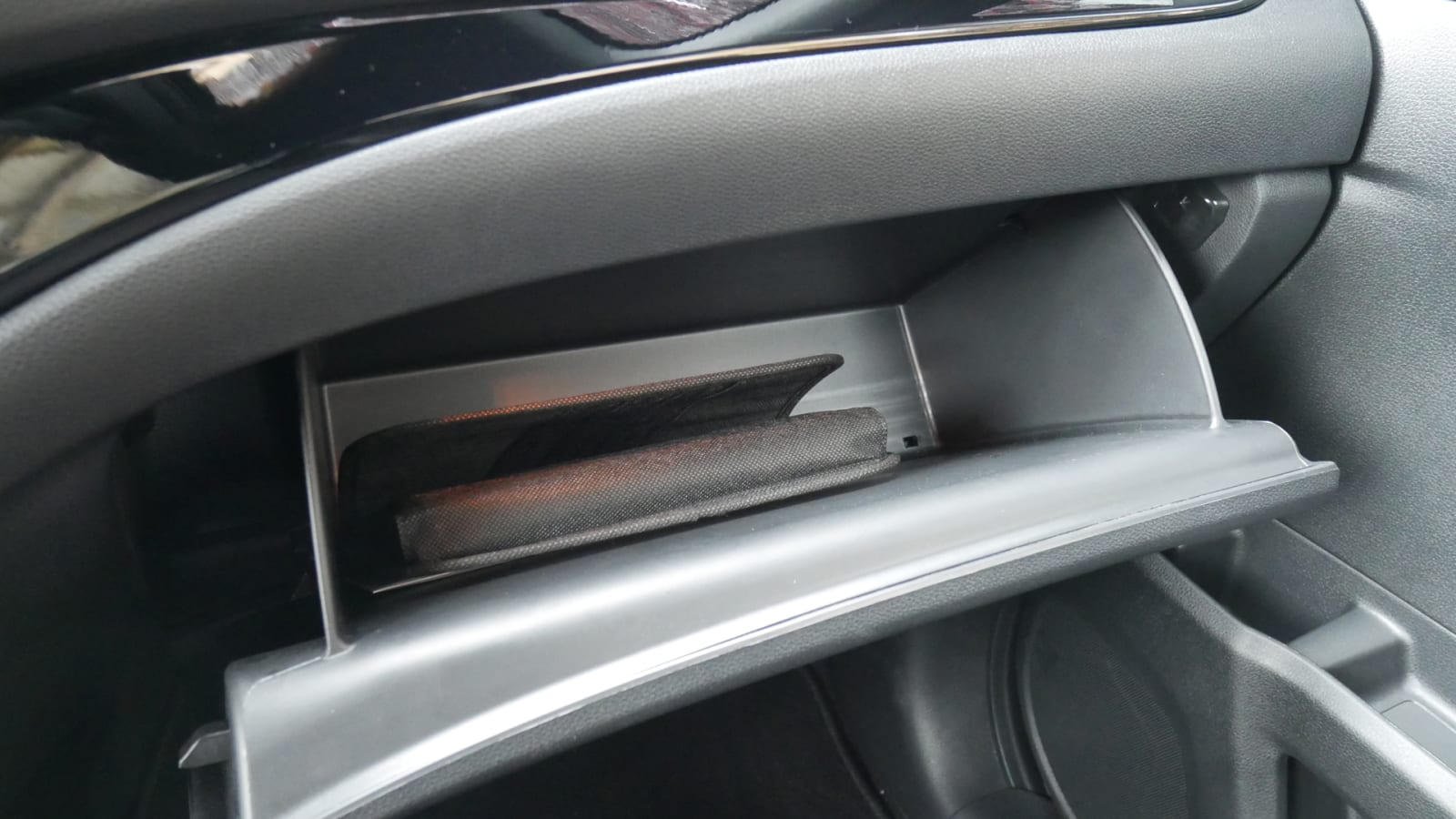 Second-row captain's chairs come standard on the Elite and Black Edition, and are optional on the Touring. Some might think that captain's chairs are a good choice since they make it easier to climb between the second and third rows, but apparently Honda has other ideas. It has filled that space with this tray/cupholder unit mounted to the floor. Seems like this makes it harder to climb into the third row while also not being much of a center console. I don't get it. 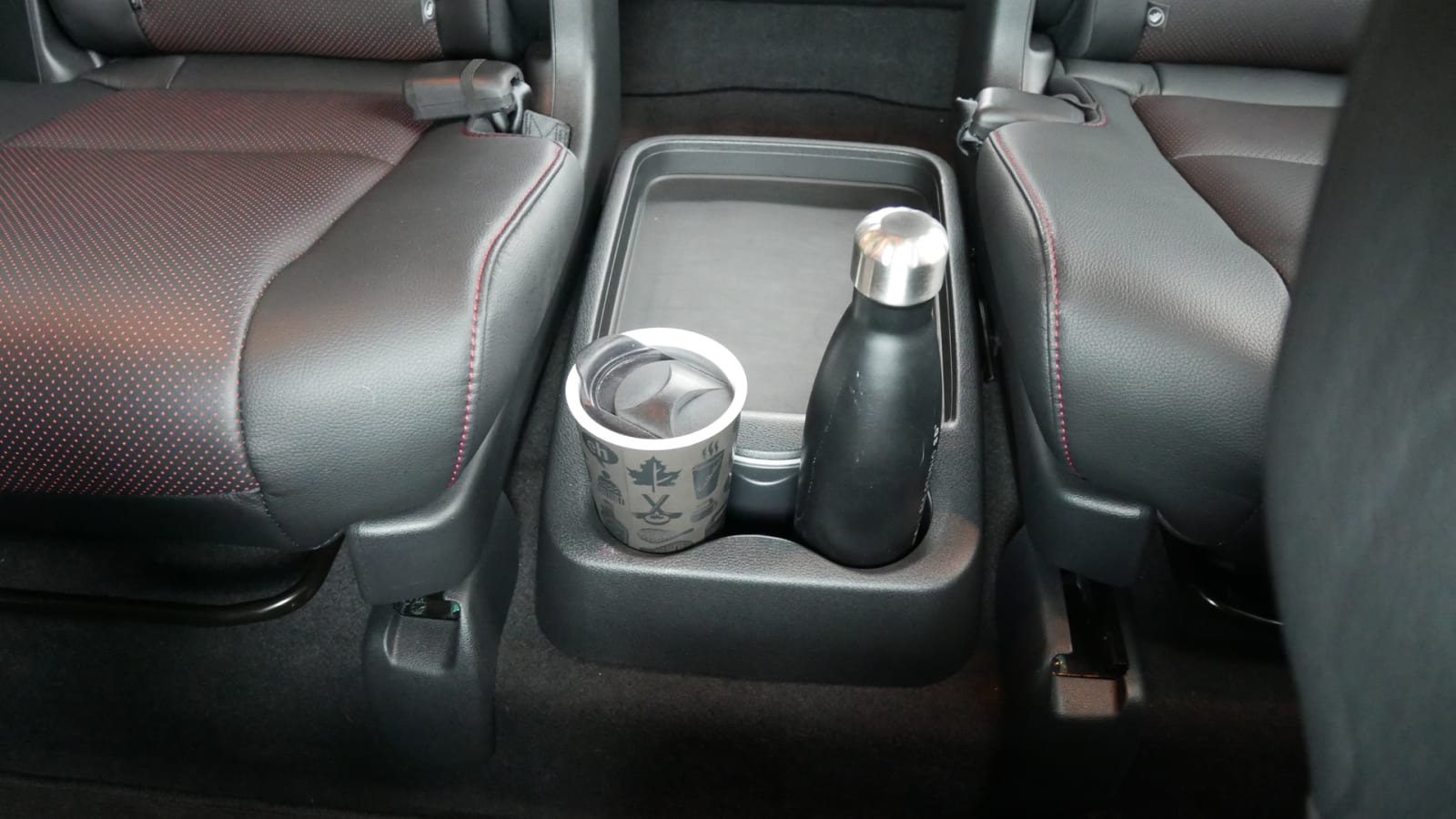 However, those aren't the only cupholders in the second row ... 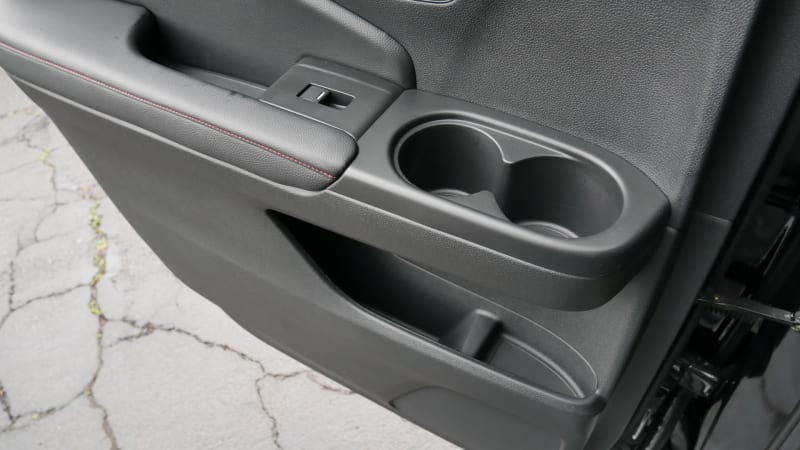 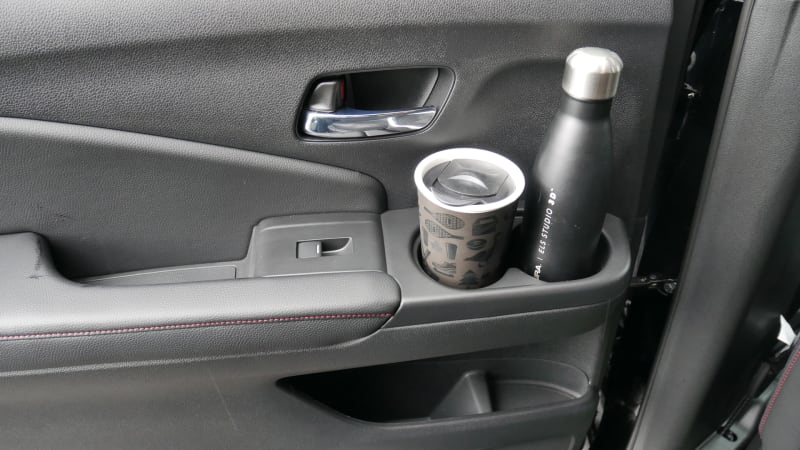 There are two in each door of slightly differing diameters. Neither is big enough to hold the Yeti, but nevertheless, the black coffee mug and Acura/ELS bottle are still perfectly normal-sized vessels. This is a great use of space and there's still more storage areas below.

Ah but wait, there's a whole other row! 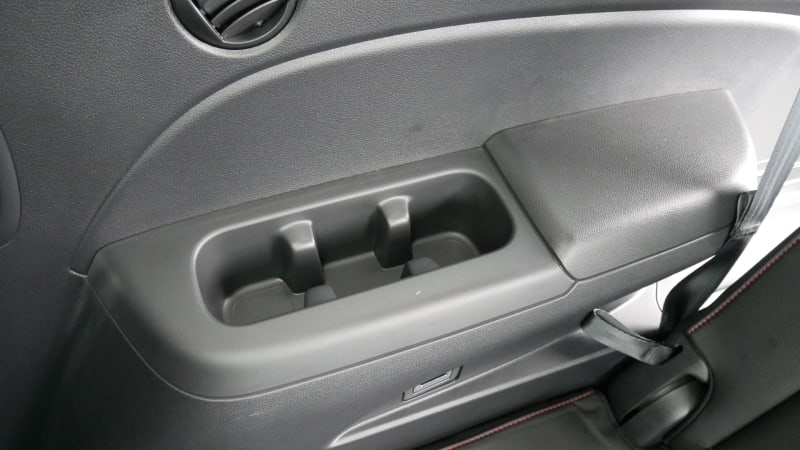 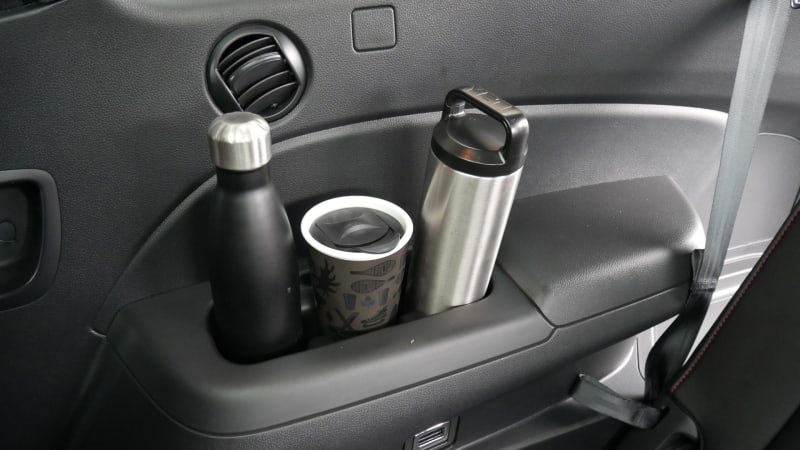 Bam! There are three on each side of the third row, which as you can see, can hold three sizable bottles/mugs. Alternatively, the bumpers in the middle are open and create a channel designed to hold an iPad, smartphone or maybe even a book. Clever. 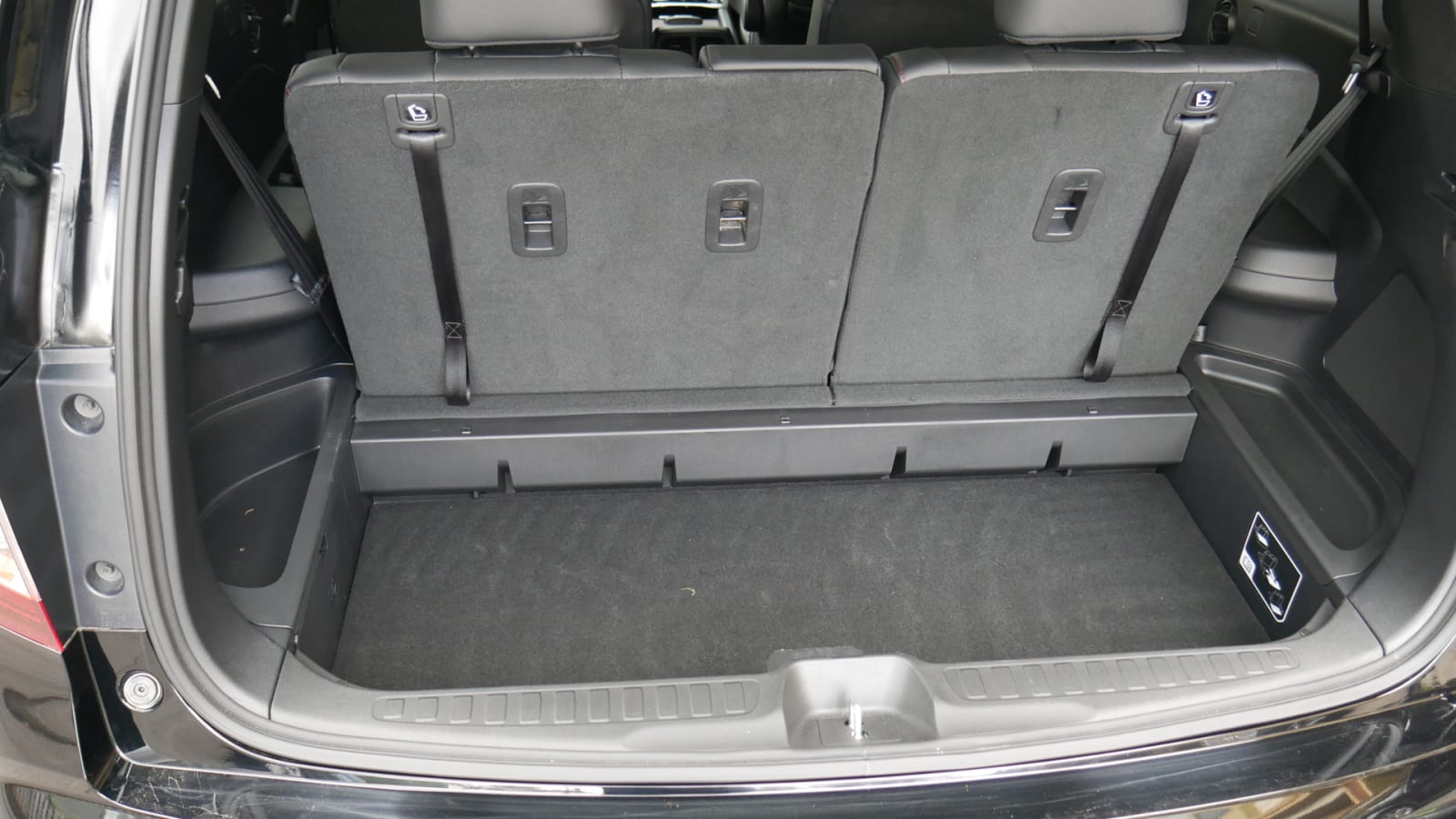 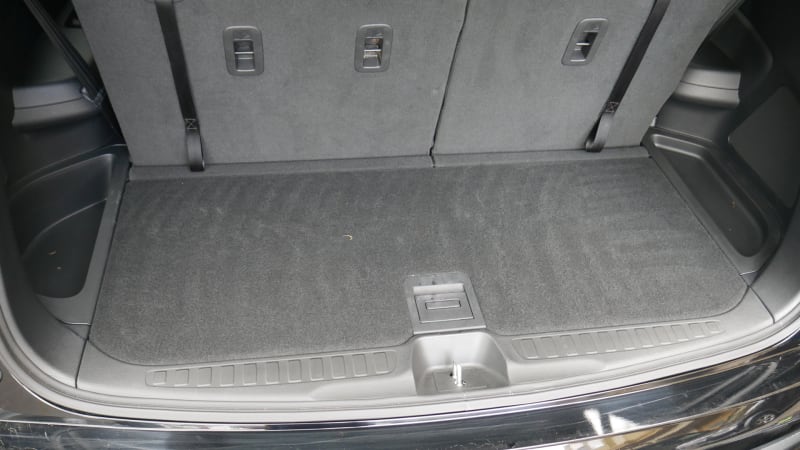 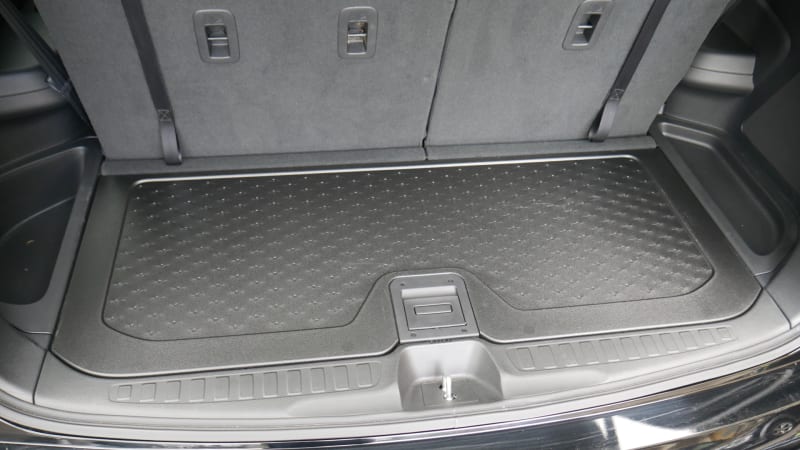 Finally, as was detailed in our Pilot Luggage Test, there is extra storage available under the cargo floor. The floor piece itself is double sided: one carpeted and the other textured plastic intended for dirty objects. The bins on either side are similarly plastic.

The floor piece also slides into the area below meaning you don't need to find someplace to store it, while also providing the lower cargo configuration with the comparable option of a plastic floor.

So there you have it. The Pilot may be getting on in years and increasingly overshadowed by newer competitors, but it remains as clever as always. All these bins, cupholders and details serve to make the lives of moms, dads and kids easier, especially on long drives. And if they only wear black, well then, that really seals it.