A 2,000-mile trip in Chevrolet's big sedan, into the pantheon of automotive history VANCOUVER, B.C. — Over a million Americans had at least one thing in common in 1965: They bought a new Chevrolet Impala.

First released as an upmarket evolution of the Bel Air for the 1958 model year, the Impala nameplate was gradually woven into the American fabric by the millions of drivers who used it to commute, take their kids to school, or go on vacation. For some, it brings back memories of their first date. For others, it's fondly remembered as their grandpa's last car. The Beach Boys sang about its available big-block, 409-cubic-inch V8 in 1962, and rappers like Dr. Dre made the six-four — preferably with 16 switches — famous on VH1 during the 1990s.

But times change, markets evolve, and the unimaginable sometimes becomes inevitable. Here we are, driving a Chevrolet Impala for the last time before production ends at the Detroit-Hamtramck factory without a direct replacement in sight. This silver, 2020 LT model carries a $32,495 base price, and I can accurately describe it as rental car-spec because it came to me via the nice folks working at the Vancouver airport's Avis counter.

I headed straight for the trunk, which at 18.8 cubic feet is big enough for two large suitcases, two carry-ons, and my backpack with a little bit of room to spare. That statistic puts the Impala at the top of its class, or what little is left of that class, and the development team achieved it without encroaching on the interior. It's a five-seater, but if front bench seats hadn't been unceremoniously drummed out of the industry it could, like many of its predecessors, carry six adults in relative comfort. It instead receives what the window sticker refers to as front bucket seats, but you're on the wrong track if you're picturing something along the lines of what you'd find in an autocross-ready Fiat X1/9. The chairs are wide, almost cozy, and designed with an eye on understated comfort, which sets the tone for the rest of the interior. Nothing in it sweeps you off your feet, and it doesn't take much poking and prodding to find cheaper materials, but the overall package is just nice enough to live up to its price tag.

It's a far more pleasant place to travel in than the last-generation Impala, whose dashboard looked and felt almost truck-like. It's not as tech-driven as the newest Toyota Avalon, and it's nowhere near as sporty as the Dodge Charger, but it doesn't need to match either. It's its own thing, the automotive equivalent of apple pie: often unexciting but also unpretentious, modest, and homey.

The trouble is that the number of shoppers seeking these qualities in their next car is dwindling. Chevrolet sold 44,978 examples of the Impala in 2019, a 20.5% decline compared to 2018. The Camaro outsold it; the disorientingly ancient Express van did, too, by 32,479 units. 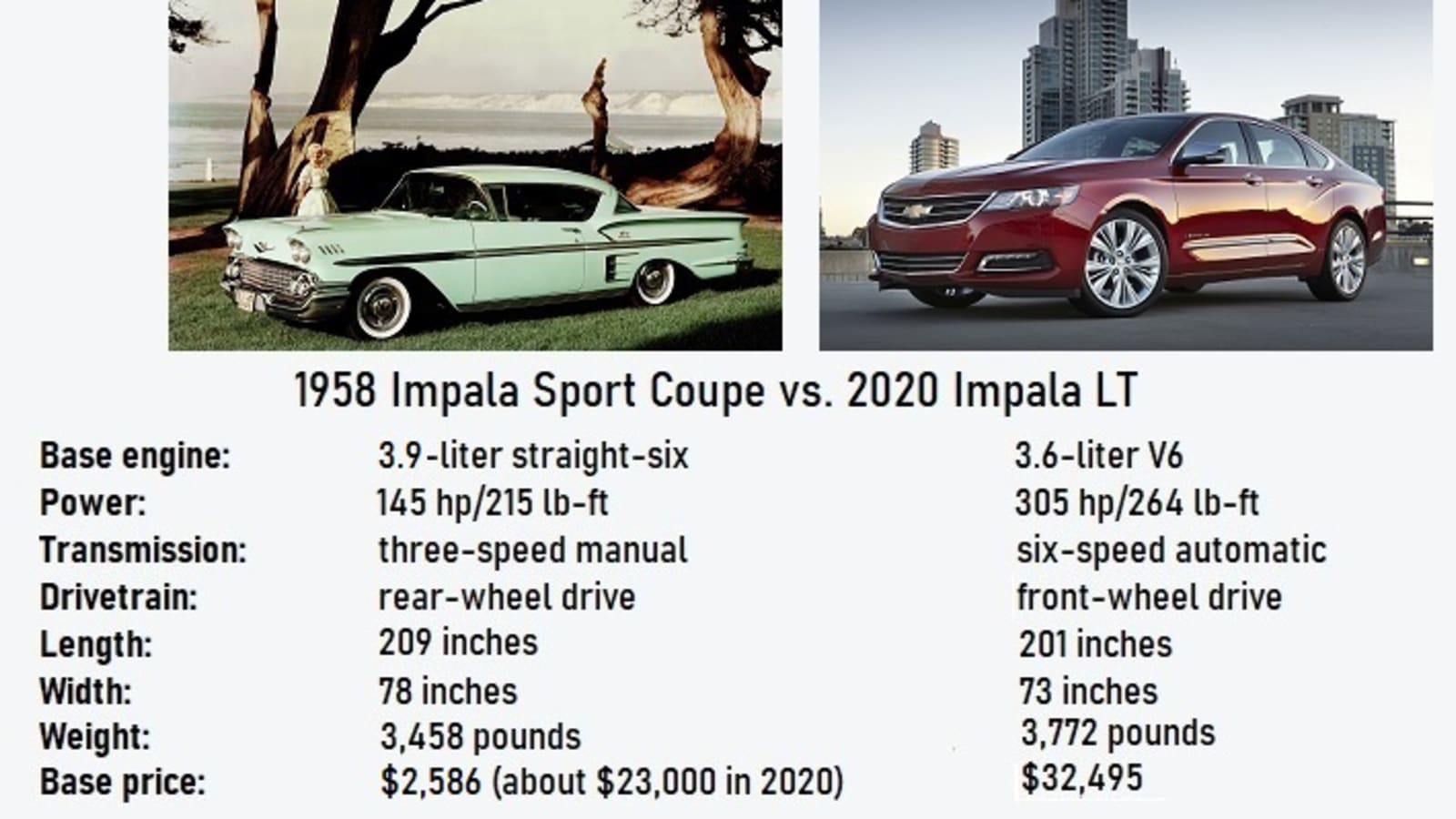 The Impala's decline is relatively recent. Chevrolet managed to sell 311,128 units in 2007, a number that made it America's fifth-best-selling car that year. Drop the Monte Carlo, which was based on the Impala, into the mix and the total swells to 326,912, putting the duo behind the perennially popular Honda Civic by about 4,100 sales. But as Impala sales alarmingly dropped during the 2010s, slipping under the 100,000-car threshold in 2016, executives threw in the towel and began paring down the range. The writing was on the wall.

The entry-level four-cylinder retired after the 2019 model year, so the Impala entered 2020 with a naturally aspirated 3.6-liter V6 as its only engine option. It delivers 305 horsepower at 6,800 rpm and 264 pound-feet of torque at 5,200 rpm, and it spins the front wheels via a six-speed automatic transmission. On paper, these specifications paint a picture depicting an anachronism, and not a very exotic one. Downsized turbocharged engines and transmissions with eight or more gears are the new norm in the automotive industry.

And yet, in application, the Impala's powertrain works beautifully. Nothing about it tempts you to channel your inner Lewis Hamilton, but it's more eager to move than its portly proportions suggest. That's largely due to the six's 305-horsepower output, which isn't anything to sneer at even when we're discussing a 3,772-pound car. It's fine around town, markedly out of its comfort zone on twisty roads, but oh-so-happy on the highway, and that's an important factor in the constitution of the Impala's character. Cruise control was invented for a car like this.

An honest-to-goodness car is worth celebrating, especially in the era of pseudo performance and counterfeit luxury. Granted, it lacks character, but so does the Equinox, yet that ended 2019 as one of America's best-selling cars.

Set it, forget it, and the Impala does the rest, regardless of whether you're getting off at the next exit, or driving from Washington state to Washington, D.C. Its V6 returns 28 mpg on the highway, and it's fitted with an 18.5-gallon tank, so it theoretically offers a very usable 518-mile range. I put nearly 2,000 miles on it over the course of two weeks and not once did I step out feeling the urge to give a chiropractor a ring. I didn't love it, but I didn't hate it, and that's the point. For the past few generations, Chevrolet has engineered the Impala to be as inoffensive to as many people as possible, not to bring the backdrop to life by pretending to be something it's not.

An honest-to-goodness car is worth celebrating, especially in the era of pseudo performance and counterfeit luxury. So, why is this Impala the last of its breed? Granted, it lacks character, but so does the Equinox, yet that ended 2019 as one of America's best-selling cars. It takes a turn with the zestfulness of an Italian dirigible, but a glance at Subaru BRZ sales strongly suggests most buyers don't give a (Ford) Bronco's behind about handling.

It's far too easy to belligerently blame General Motors and its whimsical executives for the Impala's demise. It's true, the company embarked on a killing spree after it emerged from bankruptcy in 2009. Saturn, Pontiac, the Chevrolet Volt, the Cadillac CT6, the Buick Regal, and Holden are also among its victims. But, realistically, could the Impala nameplate have lived to see an 11th generation? Not by any reasonable stretch of the imagination.

Most executives I've spoken to in the past few years agree the shift toward crossovers and SUVs is permanent in the United States. Even the Honda Accord, which has historically thrived as one of America's favorite sedans, is losing ground; sales dropped by 8.1% in 2019. There is a tremendous amount of popular disinterest in the Impala's segment, which explains why the Ford Taurus died in early 2019. Spending millions of dollars to develop a next-generation model would make about as much financial sense as opening a Chipotle franchise on the moon. And, ultimately, car companies are businesses, just like Amazon and your favorite brewery. They exist to make money, not to keep tradition alive. That's our job as journalists, historians, enthusiasts and collectors.

Happy 63rd birthday, Impala, and farewell. Look on the bright side: At least you weren't reshaped into an SUV.