Chris Bruce
General Motors finally has something to celebrate about. The 2014 Chevrolet Equinox and GMC Terrain aced the latest round of small overlap front crash tests by the Insurance Institute for Highway Safety among nine midsize SUVs, and they both scored a Top Safety Pick+ accolade. However, Honda, Mazda and Kia fared badly with their entries earning Poor ratings in the Overall safety category.

The Equinox and Terrain were the only vehicles among those tested to score Good ratings in every category of IIHS testing. The group praised updates to 2014 models that strengthened the front structure and door-hinge pillars, which helped keep the dummy's movement in check.

The Toyota Highlander was actually tested in December 2013 but results were included in the recent test. It also scored Top Safety Pick+ rating but received only Acceptable results in the organization's Overall, Structure and Restraints and Kinematics categories. To earn the award, a vehicle must have Good or Acceptable scores, plus offer some form of front crash prevention technology.

The Jeep Grand Cherokee, Toyota 4Runner and Ford Explorer all received Marginal scores in the Overall category, and the Kia Sorrento, Mazda CX-9 and Honda Pilot had Poor scores. The Pilot showed one of the worst examples of intrusion into the cockpit in the test when the parking brake pedal moved inward more than 16 inches, and the steering column moved over 5 inches to the right.

The new small overlap front crash test replicates a collision where 25 percent of the front end strikes a barrier at 40 miles per hour. It focuses a lot of energy into a small area, which makes it a very difficult test of a vehicle's integrity. Scroll down to see videos from each of the crash tests and read the full results.

The Chevrolet Equinox and its twin, the GMC Terrain, are the only midsize SUVs out of nine evaluated to earn a good rating in the IIHS small overlap front crash test, which continues to challenge manufacturers more than a year and a half after its introduction.

The Equinox and the Terrain qualify for the Institute's highest award for 2014, TOP SAFETY PICK+. The Toyota Highlander, a midsize SUV whose acceptable small overlap rating was announced in December, also qualifies. The award is given to vehicles with a good or acceptable small overlap rating, good ratings in four other occupant protection tests, and a rating of basic or higher for front crash prevention.

Three other midsize SUVs in the test group rate poor for small overlap protection, and three are marginal.

"SUVs have gotten much safer over the past few generations, but some are better than others at providing comprehensive front crash protection," says David Zuby, IIHS executive vice president and chief research officer. "When it comes to midsize SUVs, General Motors is showing the way forward. The Equinox and Terrain score well in all components of the small overlap test - structure, restraints and kinematics, and injury measures for four body regions."

The small overlap test replicates what happens when the front corner of a vehicle collides with another vehicle or an object such as a tree or utility pole. In the test, 25 percent of a vehicle's front end on the driver's side strikes a rigid barrier at 40 mph.

The test is more difficult than either the head-on crashes conducted by the government or the longstanding IIHS moderate overlap test. In a small overlap test, the main structures of the vehicle's front-end crush zone are bypassed, making it hard for the vehicle to manage crash energy. The occupant compartment can collapse as a result.

The Equinox and Terrain were able to overcome this challenge, thanks to modifications on 2014 models to their front structure and door-hinge pillars. In the test, which was conducted on an Equinox but applies to the Terrain as well, the driver space was well-maintained, and the dummy's movement was well-controlled. The dummy's head hit the frontal airbag and stayed there. It would have been a perfect test performance if the side curtain airbag had provided more forward coverage. As it was, there was a gap in the inflated portion, which, in a slightly different crash, could leave the head vulnerable to hitting the door or intruding objects.

The Honda Pilot was the worst performer in this group. The driver's space was seriously compromised by intruding structure. In the worst instance, the parking brake pedal moved inward 16½ inches. The dummy's head barely contacted the frontal airbag before sliding off the left side, as the steering column moved 5½ inches to the right. Measures taken from the dummy showed injuries to the left hip would be likely in a crash of this severity, and injuries to the left knee and both lower legs would be possible.

A structure that can withstand a crash is the most fundamental aspect of occupant protection. In addition to the Pilot, four other midsize SUVs received a poor rating for structure. One of them, the Mazda CX-9, saw its hinge pillar pushed in 17 inches, bringing the left front wheel even with the dummy's knee. The side airbag didn't deploy, and the door frame ended up so far inside the occupant compartment that the dummy's head struck it after sliding off the frontal airbag. In the Ford Explorer, the door hinge pillar was nearly severed from the door sill.

In five vehicles, the dummy's head barely contacted the frontal airbag before sliding off it. Only the Equinox/Terrain and the Toyota 4Runner tests showed good engagement with the frontal airbag. In the Jeep Grand Cherokee, the dummy's head for the most part stayed on the airbag, but too much give in the safety belt allowed the head to move toward the intruding A-pillar.

For the first time in 2014, a good or acceptable rating for small overlap protection, along with good ratings in the moderate overlap front, side, roof strength and head restraint tests, is a requirement for TOP SAFETY PICK. The Equinox, Terrain and Highlander earn the higher accolade of TOP SAFETY PICK+ because each is available with an optional front crash prevention system. 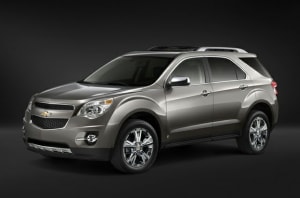