Bolt-on parts make it taller, tougher and a little quicker Subaru's idea of updating the Crosstrek is dropping a bigger, 2.5-liter flat-four engine in the engine bay. American tuner Crawford Performance has other plans for the city-friendly crossover. It turned the model into an off-roader enhanced with a lift kit, skid plates, and extra lights reminiscent of Subaru's rallying past, among other add-ons.

California-based Crawford Performance knows what it takes to improve a Subaru. It's one of the companies responsible for the Crosstrek Baja Racer introduced in 2019, and it's the only aftermarket parts manufacturer ever factory-backed by Subaru. The suspension lift it developed for the second-generation Crosstrek adds 2 inches of ground clearance to the front axle and an extra inch and a half to the rear. For context, the Crosstrek sits 8.7 inches off the ground when it rolls off the assembly line, so the lift alone raises it above the 10-inch mark.

Subaru didn't develop the Crosstrek for hardcore off-roading, so Crawford added tubular bumper overriders on both ends and over both rocker panels, aluminum skid plates that protect vital mechanical components from oily (and expensive) encounters with boulders, and additional lights mounted in front of the door mirrors. Spot lights and 15-inch alloy wheels wrapped by beefy tires ensure you can see what's ahead and effortlessly drive over it.

Crawford kept the stock, naturally-aspirated 2.0-liter flat-four engine but Top Gear learned it installed an air-oil separator and intake spacers to increase its output from 152 to 167 horsepower. That's not a huge bump, but it should be enough to make the Crosstrek a little peppier. The four-cylinder still spins the four wheels through a continuously variable transmission (CVT), and it exhales through an upgraded exhaust for a rally car-like sound.

Adventurers who want to build a lifted Crosstrek need to set aside $550 for the kit, which includes aluminum strut spacers, strut extensions, and other bits and pieces like sway bar link extensions. Other parts like the skid plates, the air-oil separator, and the tubular add-ons are sold separately. And, of course, you'll need a good set of tires.

If you're not a DIYer, Top Gear reported Crawford plans to sell a fully-assembled model positioned between the production Crosstrek and a purpose-built race car. It will cost approximately $35,000 when it goes on sale. 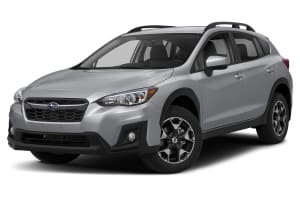