It's based on the not-for-U.S. Fiesta ST-Line

Tony Markovich
Overseas, the Ford Fiesta lineup is like a tiny family all on its own. Between the two-door and four-door versions, Ford offers different styles and purposes. There are basic economy choices, "active" choices, performance choices, and even a "luxury" Vignale option. In the middle of all of these is the Fiesta ST-Line, a mildly sporty two-door hatchback with some extra flair. Using that as a base, Ford and racing company M-Sport Poland built a new version to add to the portfolio: the Ford Fiesta R2 rally car.

M-Sport claims that this is the first car that meets the FIA's new R2 specs. It's also the first Ford-backed rally car built out of the new-generation Fiesta. You know, the one we don't get here in the U.S.

The base Fiesta ST-Line uses a 99-horsepower turbocharged 1.0-liter three-cyliner EcoBoost engine that links with a six-speed transmission, but the R2 kicks it up several notches. It still uses the turbocharged 1.0-liter EcoBoost inline-three, but the R2 puts out 200 peak horsepower at 6500 rpm and 214 lb-ft of torque at 4000 rpm. It also swaps in an adjustable Sadev five-speed sequential gearbox that can be set to three differential ramps: 23/57, 27/57, 32/77. 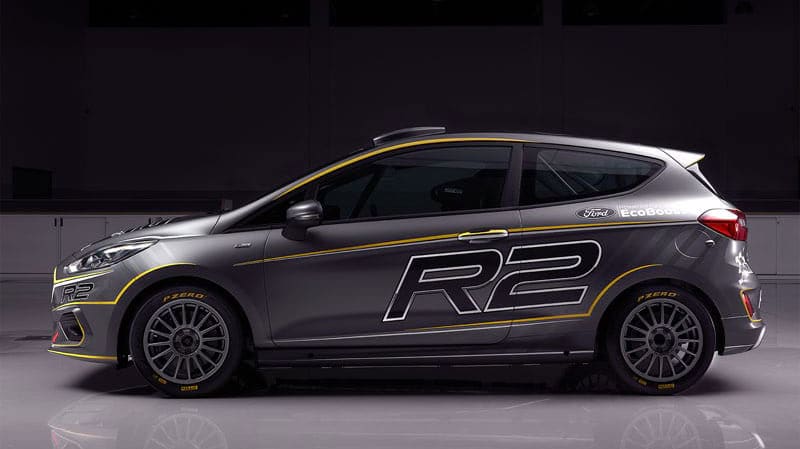 Handling the ride are Eibach springs paired with three-way adjustable Reiger dampers up front and two-way adjustable dampers in back. An anti-roll bar is optional. Behind OZ Racing wheels (6x15 for gravel, 6x16 for pavement) are ventilated AP Racing discs up front and Alcon solid discs in the rear. All four corners have Alcon competition calipers.

The brains of this baby beast are a Life Racing F88 engine control unit with a three-stage anti-lag system and an M-Sport power distribution unit. Despite the holiday debut, we'll have to wait until next year to see this thing in real racing action. Look for it in the FIA Junior WRC Championship.