Hyundai put together a true hot hatch that legitimately competes with the best cars in the class. The excellent dynamics and powertrain lift it up, but a lackluster, cheap interior still holds it back from hot hatch supremacy.

NüRBURGRING, Germany — The N in the 2019 Hyundai Veloster N's name supposedly represents Hyundai's R&D base back in Namyang. For the excuse to visit Germany I'm glad N also stands for Nürburgring, the track on which it was honed and symbolic of the car enthusiast culture it wants a piece of.

Because here in the Eifel mountains it feels like a permanent party for gearheads. The parking lot where you access the Nordschleife for the legendary "tourist laps" is buzzing with cars from every corner of Europe. The air around the track is thick with barbecue smoke, hot brakes and adrenaline, high-performance engines echoing across the rolling landscape long after the track has shut down for the day. It's a heady atmosphere, and exactly the spirit Hyundai wants to capture for an American audience in the Veloster N.

The man tasked with doing that is Albert Biermann, recruited from an equivalent job at BMW M for his instinctive understanding of what enthusiast drivers want. Proof of that is evident in the number of M2s and M3s you see pounding the Nordschleife tourist sessions. Hyundai is clearly hoping he can channel that expertise into its own products. He makes the right noises about the brand's home being in Korea, but on a sunny evening in the German countryside with a pilsner in hand, it's clear this is his comfort zone and N most definitely stands for Nürburgring.

Next day we're out on the track itself, the exit from the pit lane so abrupt I've barely selected second gear before filtering out onto the Nordschleife. I've bagged first place in the train of cars behind an instructor in an i30 N, the Elantra GT relative that launched the performance brand to the European market last year to critical acclaim. And I'm determined to make him work for his lunch.

They might have a different look and distinct chassis tuning, but the i30 N and its Veloster cousin are pretty much interchangeable in terms of hardware. Like all N products, the Veloster N will be manual-transmission only for the near future, partly out of deference to enthusiasts and partly out of lack of a suitable in-house gearbox. And they have the same 2.0-liter twin-scroll turbocharged engine driving the front wheels with 275 horsepower and 260 pound-feet of torque. That's a big jump from the 201-hp, 1.6-liter Veloster Turbo Ultimate and puts it square between the Golf GTI and all-wheel-drive R, which is no accident given Volkswagen's performance products are the benchmark Hyundai needs to exceed.

And the Veloster N is equipped to do just that. The looks are significantly beefed up while under the skin lurks significant body reinforcement and a rear strut brace to provide a solid basis for the steering and suspension. There will be a base model with 250 hp and brake-activated torque vectoring, but this Performance Package version gains 19-inch wheels, bigger brakes, Pirelli P Zero tires, a lower final drive, and a fully active, electronically controlled "Corner Carving" differential similar in spirit (if not design) to the VAQ system on SE and Autobahn level Golf GTIs. Unlike the passive mechanical limited-slip differentials used by Honda and others, this means Hyundai can tune the car's response in corner entry and exit, reducing understeer on both turn-in and under power.

A quick note about nomenclature: "Performance Package" is what Hyundai calls these upgrades in Europe on the i30 N. It was used informally by Hyundai PR reps in conversation with us, but the package name (but not content) may change for the U.S. market. 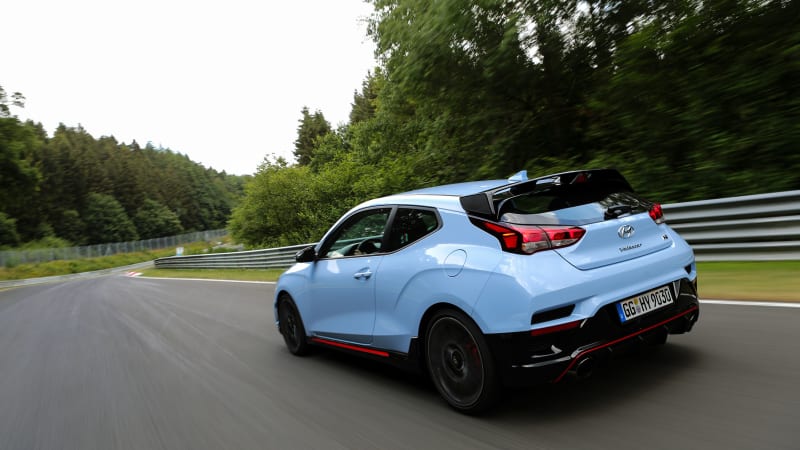 This is one of seven parameters you can tune for your own customized mode to complement the dedicated N setting. There are three on-road modes too — Normal, Sport and Eco — the intention being you can toggle instantly between these as well as the N and N Custom modes via hot keys on the steering wheel spokes. Straight out of the BMW M playbook and a more obvious example of Biermann's influence, gimmicky "N Grin Control System" branding undersells the significance of such technology at this price point.

Via the touchscreen I pre-programmed a more nuanced N Custom mode, but for this opening lap I go full N, the car tensing the instant my thumb connects with the checkered flag symbol. Throttle mapping, steering weight, adaptive dampers, exhaust sound, rev matching, stability control and the active differential all get dedicated calibrations, a wicked crackle from the tailpipes announcing we're ready for business.

It's interesting that Hyundai and Biermann are more interested in talking about emotive responses than they are stats and figures — "BPM not RPM" as they have it in the promo material. In the high-pressure environment of a Nordschleife hot lap that translates into confidence-inspiring control responses contrived by folk who clearly understand what makes fast cars fun. 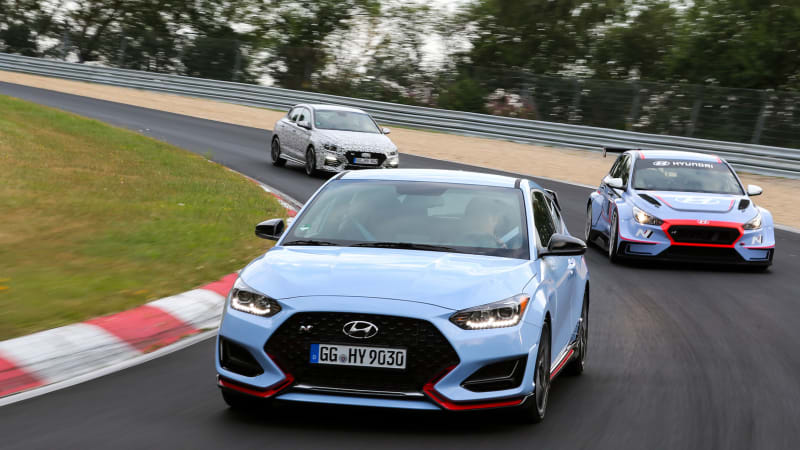 The steering is linear and predictable, pedal placement is perfect, and response to them exactly as you'd want, to the extent I switch the rev-matching function off and opt to do my own fancy footwork. For a turbo engine the throttle response is excellent and more progressive than the binary 2.0-liter equivalent in the Golf. It's also got a more expansive delivery, rewarding revs rather than just dumping all the torque in your lap from tickover. In truth, the Hyundai engine doesn't feel quite as muscular as a result, but the reward is a broader power band in which to play and more natural throttle response. This is a car built for carrying speed round corners, not simply point and squirt bursts of acceleration between them. Which is as appropriate to the Nürburgring as it is a Californian canyon road.

The stick shift has a quick, light throw Golf drivers will find familiar — no mere coincidence — and the Veloster feels instantly potent, alert and agile. It's much sharper on the front axle than anything VW offers too, there being none of the dumbed-down turn-in you get in the GTI and a more neutral line through corners that makes exploitation of lift-off adjustability and other hot hatch tricks much more accessible. Under power the active differential actually pulls the nose into the corner, a sensation that initially feels counter-intuitive but quickly encourages earlier and more enthusiastic use of the throttle. That it feels closer in spirit to cars like the Civic Type R or Focus RS — arguably a class above in terms of performance and price – is a compliment indeed.

Frankly, the setup is pretty punchy and by the second lap I switch to my N Custom mode with the dampers dialled back from Sport Plus to Sport and the mid-weight steering assistance. Immediately the Veloster feels less jittery and flows with the track rather than pinging about this way and that. Comparing notes with our instructor, he tells me this is his favored configuration and adds that Sport Plus is really only suitable for smooth, modern circuits like the neighbouring GP track. 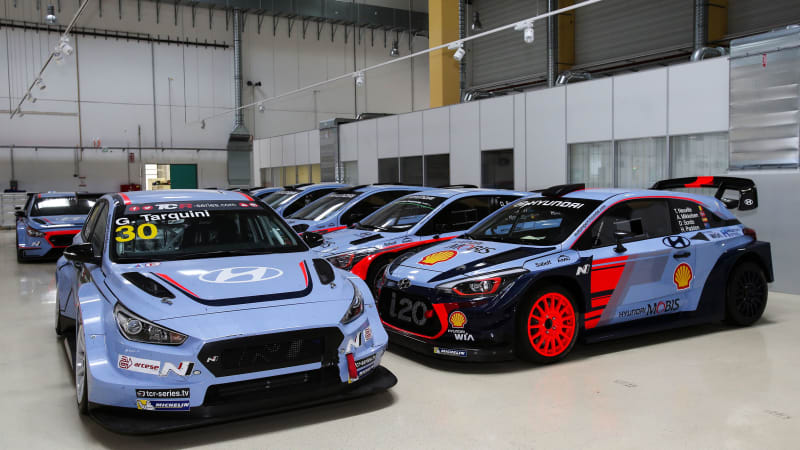 This plays out on a fast-paced street loop taking in twisting country roads and a section of derestricted Autobahn. Here the Veloster N pulls an easy 160 mph-plus and remains locked on line doing so, making me think the WRC-inspired rear wing and the various other aero adornments are there for more than just show.

With a little more head space there's a chance to take in the surroundings, the signature Performance Blue trim elements lifting an otherwise functional cabin that gets the job done but can't match European rivals for tactile quality. It's ergonomically sound, and the interface with the standard 8.0-inch touchscreen is clear and intuitive, underlining the point that the Veloster N can hack it for the everyday as well as playtime. The asymmetric design with the single, curb-side rear door remains quirky but there's just about enough space back there for a six-foot passenger behind a driver of similar size — and the Veloster is more practical and usable on this score than, say, a Toyota 86.

In short the Veloster N nails the brief. Hyundai has tested sporty-driving waters in the past, but the fact that Hyundai's N Division has done a serious performance variant on its first try is impressive and testament to the talent it has hired to achieve its goals. Can we talk about N in the same breath as GTI, R, Type R, ST, RS and the rest? Hyundai has invested the hard hours into supporting customer and factory WRC rally teams and with the i30 TCR touring car on the track, the reward being credibility that an N-badged road product can trade off from the get-go. Whether this Euro-centric racing cred translates to an American audience remains to be seen, but the Veloster N at least has the dynamics right. 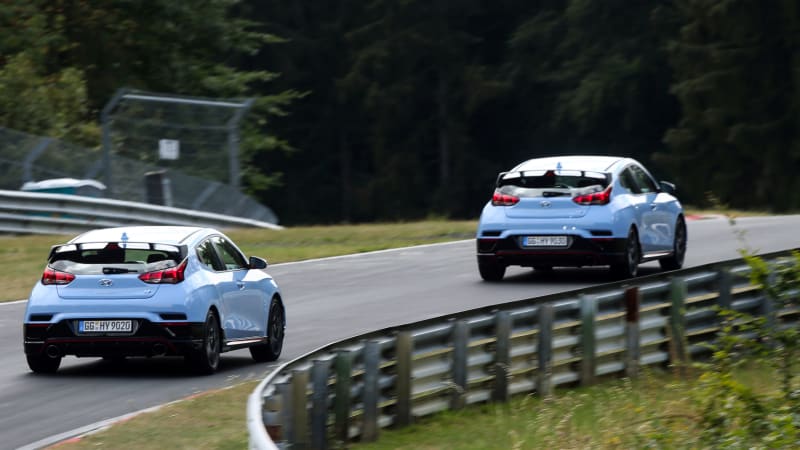 The Veloster N promises to be keenly priced too, the final figure to be confirmed but, according to a spokesperson, somewhere in the region of the $24,995 of a Civic Si Coupe and $27,310 starting price for the Golf GTI range. Feel free to speculate that the Performance Package car will be closer to $30,000 and in parity with the comparable Golf GTI Autobahn, albeit with a significant power advantage.

Will enthusiasts respond? Biermann pulls on his cigarette and permits himself a grin. "Before when I came to the Nürburgring the parking lot would be full of hot hatches from Volkswagen, Renault and the others. And now I am seeing enthusiasts with Hyundais instead — this is where we need to be." That, in a nutshell, is what N stands for. And what the Veloster delivers on, straight out of the box.