It's not the truck that counts, it's how you use it. It's the heavy stuff you fit in its bed or the extremely heavy stuff that gets hooked up to the tow hitch. The ATV, the Jet Skis, the trailer with more square footage than a Greenwich Village apartment. Perhaps you need to get Seabiscuit or, uh, Mr. Ed to wherever they need to gallop next.

In our case, there's a pair of very serious-looking snowmobiles perched atop the bed of a GMC Sierra. They spread out as wide as the extended tow mirrors, and their back halves are dangling precariously beyond the truck. Sterling Archer would be giddy; I'm a little nervous. But only because canyon roads and wide vehicles with a high center of gravity go together like peas and custard. The added weight is no sweat at all.

That's because this is the 2017 GMC Sierra HD Denali, a truck with the sort of enhanced power, torque, suspension, and stopping capability expected of a heavy-duty pickup. And for this year, the power and torque get a serious bump courtesy of a new 6.6-liter Duramax turbodiesel engine reengineered from almost the ground up with 90 percent new parts. It's quieter and more efficient and it emits less, while most importantly producing 445 horsepower and 910 pound-feet of torque. That's up from 397 and 765, respectively. Chevy fans will note that the same engine is also available in the updated 2017 Silverado HD.

Now, for those keeping score at home, that horsepower is best-in-class but the torque number still falls short of the new Ford Super Duty and its Power Stroke diesel V8's 925 lb-ft. Aw shucks. For the record, GM's engineers didn't seem too concerned that they weren't able to eke out an extra 16 torques just to say they're No. 1. 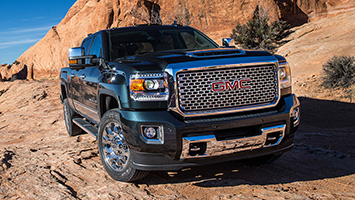 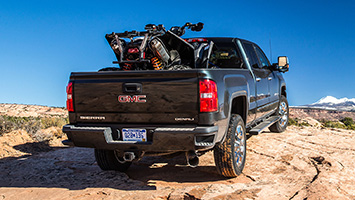 "We wanted to first meet emissions and then deliver the maximum horsepower and torque we could, and deliver it over the widest usability range possible," said chief engineer Eric Stanczak.

Ah, but here's the rub. That Cummins-equipped Ram 2500 can still tow more weight according to SAE-compliant measurements – 17,510 pounds for a Ram crew cab with a short bed versus 13,000 in the similar Sierra 2500. The Ford F-250 can manage 15,000. All of these figures are for conventional towing – opting for a fifth-wheel configuration increases capability, with the Sierra 2500 topping out at an absolute maximum of 18,100 for a two-wheel-drive regular cab stripper model. The equivalent 3500 dually is good for a maximum of 23,300 pounds.

Don't expect to see many of those bare-bones trucks around, though. We were driving the Sierra 2500 Denali, the sort of range-topping model that usually gets trotted out on press launches to make sure the vehicle in question is shown in the absolute best light, even if few actual buyers typically end up in such Platinum or Elite models. In the Sierra's case, though, the Denali is the volume seller. Nearly half of Sierra HDs are Denalis and then 90 percent of those are equipped with the Duramax, meaning 45 percent of buyers walk away with a truck just like the one you see here (minus the snowmobiles).

And that truck costs $70,145 as tested, including the $9,550 Duramax option. That seems steep, but it's important to reiterate why it's purchased in the first place.

"What they're towing is often worth many times more than the truck itself," said chief engineer Stanczak.

Take the 25-foot trailer we towed up the steep, winding incline leading out of Paradox Valley in Colorado, the sort of grand, red-rock vista that was the stuff of John Wayne movies. That's actually not a metaphor; True Grit was filmed there.

The Sierra pulled and pulled and pulled up the grade, free from any abrupt downshifts from the mostly carry-over, but strengthened six-speed automatic transmission. Torque will do that for you, friends. And should it have been August in Paradox Valley with the thermometer pushing triple digits, the Duramax's new, patent-pending cold-air intake system would've made sure it kept pulling with similar authority. Identified by its chrome-rimmed hood scoop, the system's addition of colder air helps keep the engine and transmission from losing power under heavy loads and high temperatures. In certain situations, one could see that being as much of an advantage as all that torque. 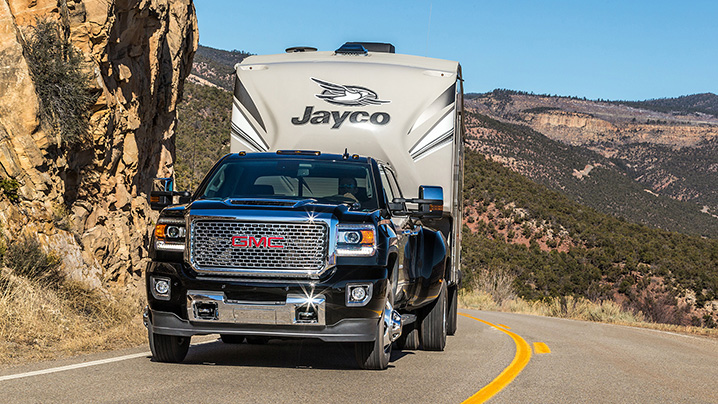 Honestly, though, the Sierra's other towing tricks can be just as helpful. Flipping a toggle switch activates the improved exhaust brake – let off the throttle on a downhill grade and the exhaust path is shut down, building up back pressure in the cylinders to essentially work backwards and slow the truck. Selecting Tow/Haul mode works with the exhaust brake as does the cruise control system.

Also appreciated is the Denali's multiple cameras and mirrors that help keep you, the truck, and the small house you're towing in a straight line while negotiating a mountain road or just the RV park. Besides the two large mirrors they hold, the tow mirror housings enclose cameras that work similar to Honda's LaneWatch blind-spot camera, albeit in both turning directions. Hitting the turn signal in either direction activates the camera on that side, which not only helps make sure you're not about to crush a Fiesta, but also that you're not cutting the trailer across a double yellow or excavating a canyon wall. You can also keep a split view feed from both cameras on the IntelliLink touchscreen at all times, which was surprisingly quite useful. It was easier to keep an eye on the road ahead and the trailer around tight corners by using the screen as opposed to the passenger-side mirror that might as well be in the neighboring county.

There are also rearview cameras in the tailgate and adjacent to the bed light to assist in hooking up conventional or fifth-wheel trailers. That last one also comes in handy when you want to triple check that your snowmobiles haven't dropped off the truck. 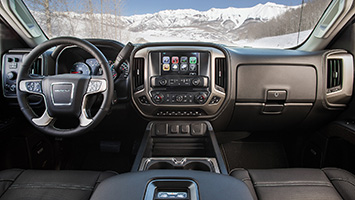 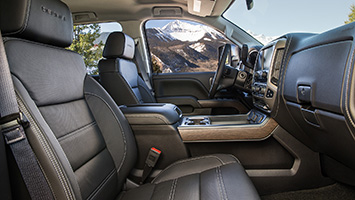 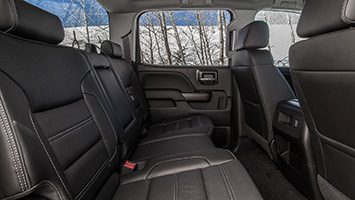 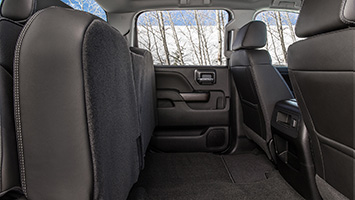 And had they, the unladen Sierra HD would at least provide a far more serene ride than heavy-duty trucks of the past. It still can't match the smoothness offered by the Ram 2500 and its coil springs (including the rugged Power Wagon we drove recently), but there isn't an objectionable amount of jiggling and bouncing about. Of course, the rear leaf springs settle when that payload capacity is exercised, but then that exacerbates the already vague steering. Actually, it isn't all that bad for a heavy duty pickup, which until very recently could best be described as "spooky," but steering is definitely one area where a half-ton pickup provides more precision and confidence.

In general, though, the Sierra HD is remarkably civilized, and although it would be a stretch to declare the Denali truly luxurious (its "wood" trim and stitched dashboard pleather don't elevate it that much over an SLT), one can see why well-off folks with ample towing needs happily spend more to enjoy its niceties. And despite all that chrome up front, it still manages to be less ostentatious than Ford's King Ranch and Platinum trucks.

To many, that'll actually be a bad thing, but in the event you're not a chrome enthusiast and would prefer your truck to visually skew toward the bad-ass, there's the new-for-2017 Sierra 2500 HD All Terrain X. It features a blackened grille and wheels, plus Rancho twin-tube shocks, Goodyear Wrangler DuraTrac tires, a spray-on bedliner, tube side steps, and a very Marty McFly sport bar in the bed complete with LED lights. It looks rad, can venture a bit further off the beaten path, can still be had with the Duramax, and will probably look more appropriate towing ATVs and the like.

The All Terrain X could therefore be the one to get, but who's to argue with the 45 percent who already choose the Denali to tow a race car, snowmobiles or, uh, War Horse? My equine knowledge really needs an upgrade.