Dig the 2020 Sonata's updated styling and tech? This one does all of that and 50 mpg

The opportune time to launch a hybrid would be when the economy is strong and gas is expensive. That would not be today. Yet, here comes the 2020 Hyundai Sonata Hybrid that costs thousands more than the gas-only version and offers 50-plus mpg. Oh, and it's a four-door sedan rather than a crossover. What could go wrong?

Hyundai chose to go with a single conventional hybrid model rather than continuing the two-pronged approach of the previous generation, which included a plug-in. While PHEVs offer more flexibility than traditional hybrids, they’re also heavier and more complex, not to mention more expensive to produce. With more buyers opting for ever-more-popular dedicated electric vehicles, PHEVs seem to be evaporating from the marketplace. Hyundai has the tech in its back pocket just in case, but for now, this is the only Sonata Hybrid model on the market.

It combines a 150-horsepower gasoline engine with a 39-kilowatt (51 hp) electric motor for 192 total system horsepower. Following the formula of the previous model, this hybrid system is mated to a conventional six-speed automatic. Hyundai says there are efficiency gains to be made with the switch to a CVT, which might happen down the road. A plug-in system isn’t the only thing Hyundai is holding back, apparently.

The battery itself has been moved from under the trunk floor to under the back seat, bringing its substantial weight to a more balanced position within the axles and reducing the amount of heavy body reinforcement needed for its previous positioning. Though we didn't have a previous-generation Sonata Hybrid on hand to compare, this in theory should improve the car's handling balance. It also increases trunk space by 2.5 cubic-feet, providing a total of 16 cubic-feet that basically matches the gas-only model.

But the Sonata Hybrid’s real party piece is its optional solar panel roof. Hyundai says it’s only good for about 700 miles of range recovery a year in ideal conditions — or a little less than 2 miles per day — and that’s assuming you actually park the car where it can see daylight. Those numbers aren’t particularly impressive, and we’ll acknowledge that it’s a bit of a gimmick, but the solar roof just might be the kind of feature that will attract buyers who want to present themselves as striving for sustainability. “Cool” is probably not the right word for something that harnesses energy from the sun, but it’s the sort of touch that just might appeal to the same buyers who saw the original Toyota Prius’ less-than-flattering shape as an upside. These buyers want the future, not what’s stylish by contemporary standards. 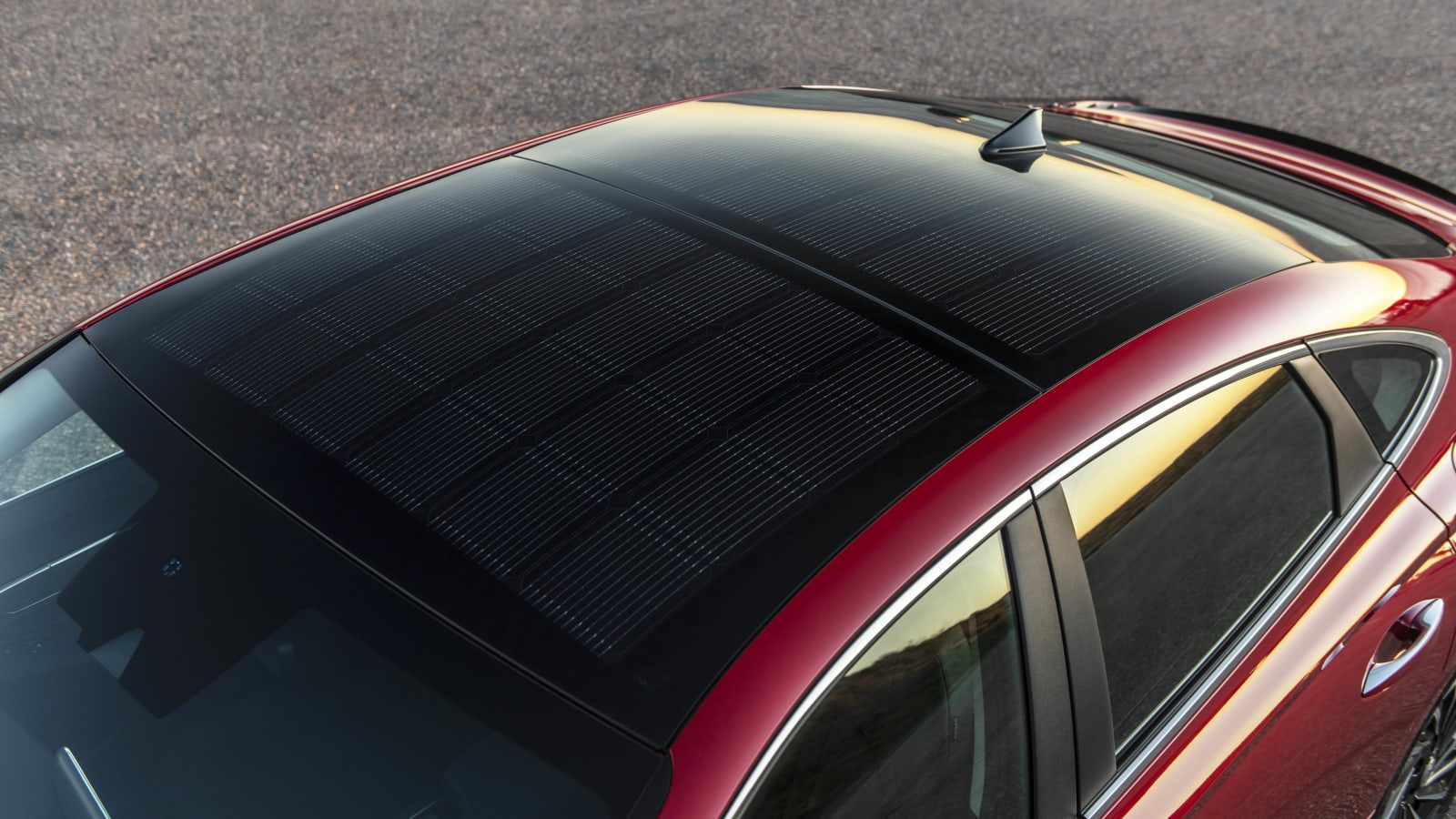 As with many hybrids, the Sonata’s EPA figures vary by trim level. The SEL and Limited are rated at 45 mpg city, 51 mpg highway and 47 combined. The Blue model is designed for the true efficiency freaks, checking in at a whopping 50 mpg city, 54 highway and 52 combined. Hyundai says the Blue can deliver up to 686 miles of total range from a single tank of gas.

The Blue's figures put the Sonata Hybrid at the top of the class in terms of efficiency, sharing the spotlight with the Toyota Camry Hybrid LE that offers 51 mpg city, 53 highway and 52 combined. All other Camry Hybrid trims manage 44/47/46 mpg. The Honda Accord Hybrid betters those and the non-Blue Sonatas' at 48/47/48 mpg, but forgoes best-in-segment bragging rights by not offering a hypermiler trim level.

Over the course of our 100-mile evaluation loop and a good bit of around-town driving, we managed to coax an average of 42.2 mpg from the Sonata. That may seem disappointing on paper, but a good chunk of our drive time was dedicated to performance testing. Hybrid or not, putting the hammer down is going to put a dent in efficiency.

Even by hybrid standards, the Sonata’s performance won’t set the world on fire, but there’s plenty of punch on call when needed. Hyundai includes a performance-oriented drive mode that keeps the transmission in lower gears and improves throttle response, and our Limited model even came with paddle shifters. When was the last time you saw those in a mainstream hybrid? They work just fine, too, though the computers are eager to return to normal “Drive” when the paddles have been left alone for more than a few seconds.

Holding gears may be situationally useful, but the real upside to Hyundai’s decision to go with a traditional transmission is the reduced noise. The six-speed produces far less intrusive noise than most CVTs (including the electronically controlled ones of hybrids), and while the engine does get a bet thrashy when you’re really on it, that’s a product of putting a tiny gasoline engine into a heavy, midsize sedan. Even with the added torque of the electric motor, that 1.6-liter four-banger is being worked hard when pushed.

Otherwise, comfort and refinement are the Sonata Hybrid’s real attraction. When not being hustled, it’s downright plush. The ride is smooth even over broken pavement, and the steering effort is darn near perfect for those who simply want a good commuter. It does feel a bit large, but most midsize cars these days do. 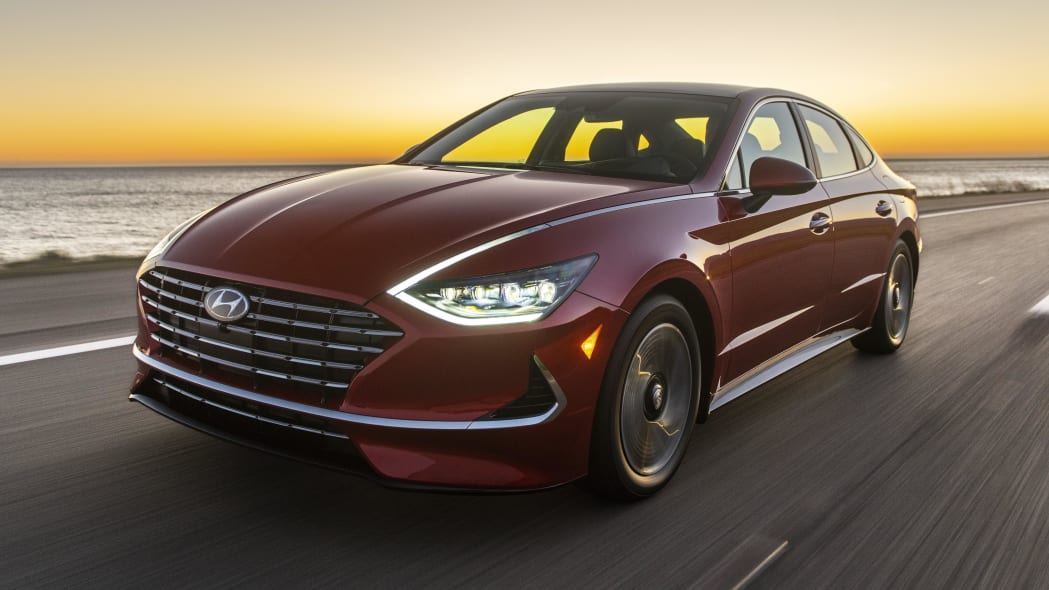 For a large, heavy car, it acquits itself nicely should you find yourself on a winding road. There’s plenty of grip even from the efficiency-friendly tires, and the suspension keeps unwanted body motions in check for the most part. There’s a sense of isolation to the ride, but not so much that you feel disconnected. It’s not numb, just detached enough to provide that plushness. The brakes aren’t anything to write home about, but they get the job done, and the transition from hybrid system regen to full-on hydraulic braking is relatively seamless.

What makes the Sonata Hybrid different is almost entirely underneath the sheetmetal. Outside, there are some cosmetic differences – a smaller grille, a reshaped airdam featuring prominent chrome trim and a new back bumper without exhaust ports. But for better or worse, the hybrid carries over all of the basic Sonata's visual drama. There's really no significant sign you're in anything other than a run-of-the-mill 2020 Sonata, until you press the start button and are greeted by silence and an EV mode indicator.

Inside, there's an even greater resemblance between regular and hybrid Sonata than the mildly tweaked exterior. Apart from the instrument panel design, there's no telling them apart in appearance or feature content. We tested a Sonata Hybrid Limited, which includes the same 10.25-inch infotainment control touchscreen and 12.3-inch all-digital cluster and driver information system (lower trims get an 8-inch touchscreen and more traditional gauge pack).

The Hybrid also comes standard with two USB charge points in the front along with a 12v outlet. An additional USB plug for the rear console and a wireless device charging pad in the center cubby are standard on SEL models and up. There’s also a handy slot between the cupholders designed to accommodate a smartphone inserted vertically without compromising drink space. 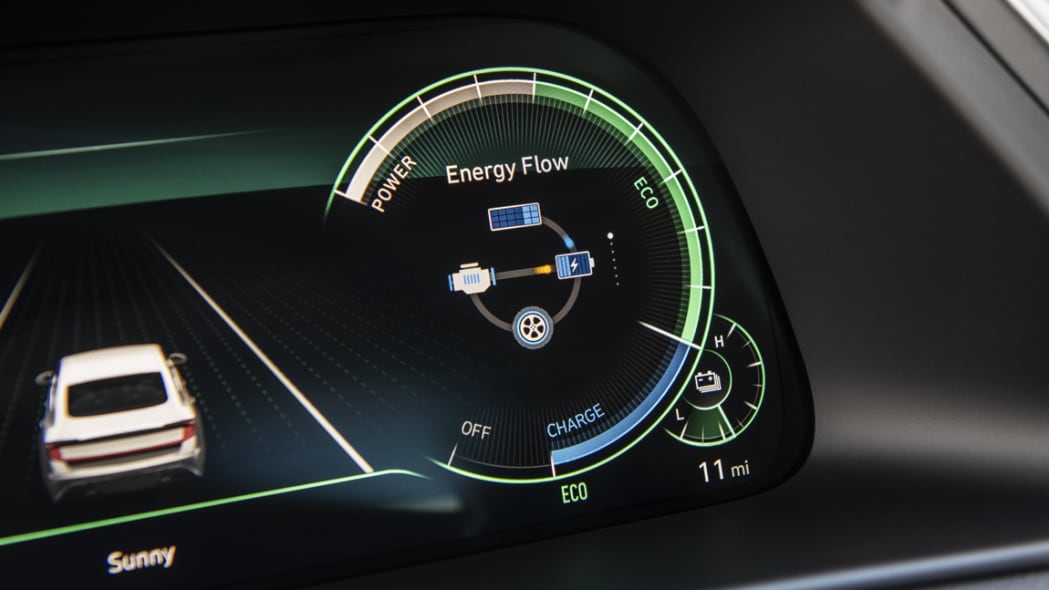 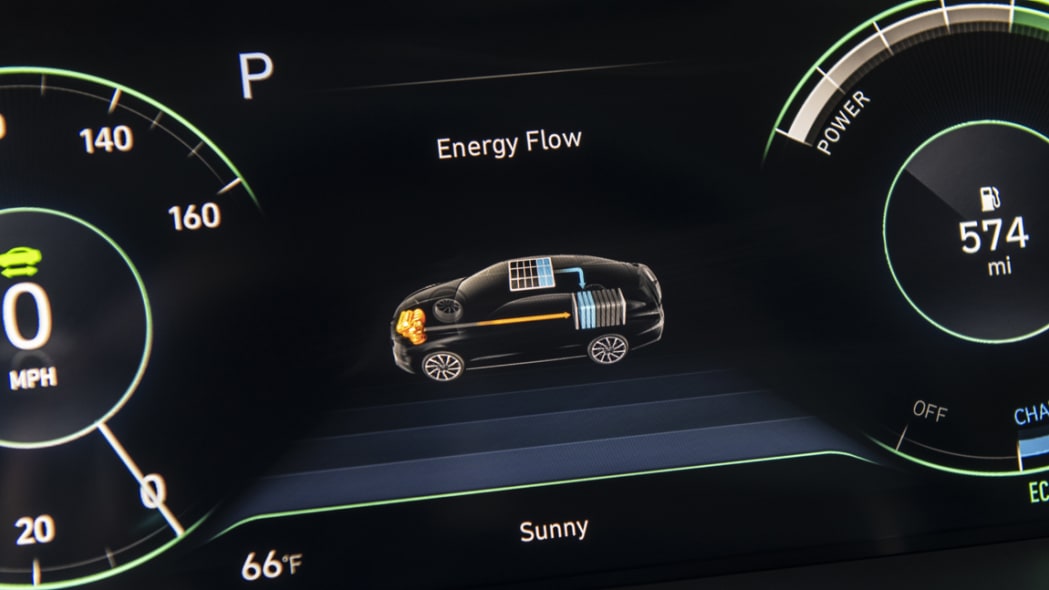 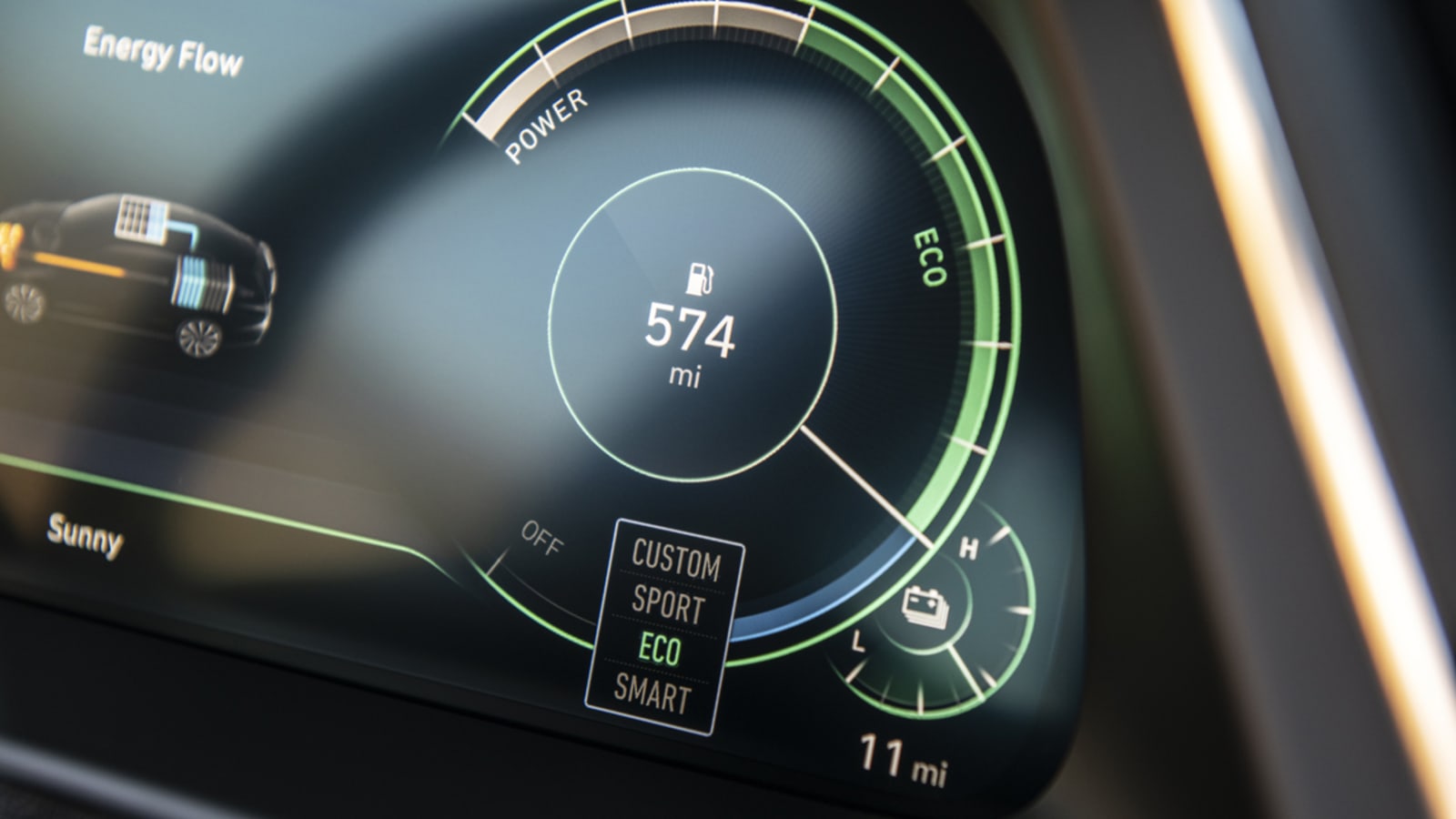 Since the Limited is effectively loaded, our loaner also came with niceties like leather upholstery, heated and ventilated seats, a heated steering wheel, built-in navigation, and an amplified Bose premium audio system. Hyundai’s full suite of driver aids, including the Highway Drive Assist (HDA) semi-autonomous package, was lifted entirely from the non-hybrid model too.

We’re fans of Hyundai’s in-car tech, and we’re still impressed by the versatility and depth of its driver assistance suite, but after logging a few hours behind the wheel, we did find some potentially annoying quirks. The Highway Drive Assist feature comes on by default whenever the cruise control system is enabled, and some may find the automatic steering intervention off-putting. It’s disabled via a steering wheel button, so it’s not too intrusive, but having it come on each time was a bit of a nuisance.

There are some other features buried deeper inside the driver aid system that left us scratching our heads too, such as another on-by-default setting that causes the Sonata to deliberately slow down in corners while cruise control is in use, whether it’s necessary or not. Upon discovering this feature, we immediately disabled it, as we found it borderline infuriating.

Despite these criticisms, we came away impressed by both the 2020 Sonata Hybrid’s feature content and its plush, high-tech interior. The Hybrid will command a premium over the base Sonata, and while Hyundai has not yet announced official pricing, we’re expecting the Hybrid SE to start around the $27,000 mark; Limited models like this one will likely set you back about $33,000.

With its latest effort, Hyundai managed to capture some of the magic that originally attracted buyers to hybrid cars and package it into a comfortable, high-tech daily driver. It’s not a speed demon, nor will it do much corner carving, but it’s quality transportation with tons of efficiency upside. Hyundai’s timing of the Sonata Hybrid’s launch may be inopportune, but that ultimately shouldn’t matter. Good cars sell themselves, and we believe this one will find buyers despite the many economic obstacles in its path.