PARK CITY, Utah – Adding all-wheel drive to the 2021 Toyota Avalon is pretty much an instance of "Hey, why not?" The latest-generation Avalon, like its Camry platform-mate, was never meant to have four driven wheels when it launched, but here I am less than two years after driving that supposedly front-drive-only full-size luxury sedan for the first time. What's changed? Well, the easiest answer is that the Camry got all-wheel drive, so hey, why not add it to the Avalon as well? All the engineering done to send power to the Camry's back wheels could just as easily be done to the Avalon, as they share the same TNGA-K platform.

Now, the answer as to why the Camry got all-wheel drive is a bit more in-depth, as we describe in its own first drive. In short, customers and dealers were demanding an all-wheel-drive Camry from nearly the second the new generation launched, and people were continuing to leave sedans for crossovers in part due to all-wheel drive. As a result, Toyota of North America tasked its own Michigan-based engineers to create an all-wheel-drive Camry using components from the TNGA-K SUV models, the RAV4 and Highlander. Oh, and while you're at it, they were told, do an Avalon, too.

Indeed, everything we described about the Camry's transformation into an all-wheel-drive vehicle also applies to the Avalon. Engineers reworked almost the entire floor pan to accommodate a prop shaft and rear axle. The former is from the Highlander, while the latter is joined by the multi-link rear suspension and eight-speed automatic transmission from the RAV4. To accommodate the extra equipment stuffed into the back, an electronic parking brake was fitted and a new gas tank created in a saddle shape arching over that prop shaft. The 10-mm higher back seat from the Avalon Hybrid was also used to ensure enough space for that gas tank. Trunk space remains the same.

The all-wheel-drive system is the RAV4 and Highlander's base system, the so-called "Dynamic Torque Control AWD" that responds to driver steering and throttle inputs as well as to sensors associated with the traction and stability controls. An electromagnetically controlled coupler in the rear differential then engages the prop shaft, sending as much as 50% of available power in equal proportion to the rear wheels. Neither the Avalon nor Camry are available with the more advanced Dynamic Torque Vectoring AWD that can proportion different amounts to each rear wheel. The brakes somewhat approximate this torque-vectoring effect when cornering, but it's not as successful at improving road holding.

The engine is where things get interesting. Like the Camry AWD, the new 2021 Avalon AWD comes exclusively with the 2.5-liter inline-four from the RAV4 that produces 205 horsepower and 185 pound-feet of torque (more than the base Camry's due to the Avalon's standard dual exhaust). However, this is far more significant news for the Avalon as it hasn't up to this point been available with this engine – it was previously just V6 or Hybrid only. Now, you're left with three choices: four-cylinder AWD, V6 FWD or Hybrid FWD. Pricing won't be announced until the fall when the 2021 Avalon goes on sale, but we're told the AWD and V6 will be basically the same price, leaving customers with the choice of all-weather traction and better fuel economy (still to-be-determined but likely to be comparable to the Camry XSE's 28 mpg combined) or the abundant power of a 306-hp V6 that gets 25-26 mpg combined. The Hybrid, meanwhile, will maintain its incredibly reasonable price premium of $1,125 and fuel economy of 43-44 mpg combined.

On paper, 205 horsepower is not a lot to motivate a full-size sedan. However, at 3,571 pounds, Avalon only weighs about 40 more pounds than the comparable Camry. So really, if this four-cylinder is sufficient in the mid-sizer for the vast majority of buyers (a mere 6% choose a V6), one should assume the Avalon's comparably less-than-brisk performance will be perfectly acceptable as well. In fact, during our drive around Park City, Utah, the Avalon actually pulled off the trick of feeling quicker than the Camry thanks to a clear advantage in sound deadening between the engine bay and cabin. The engine doesn't sound like it's straining as much, creating the impression of greater strength. Is it an illusion? Sure is, but there's nothing wrong with taking the Blue Pill once in a while. 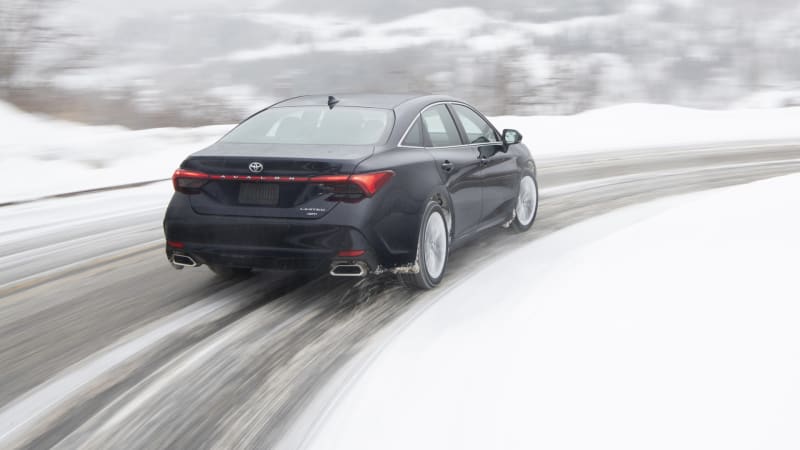 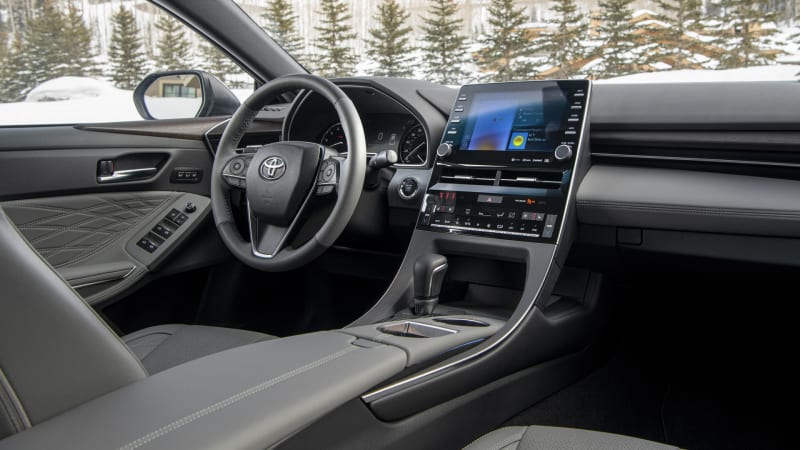 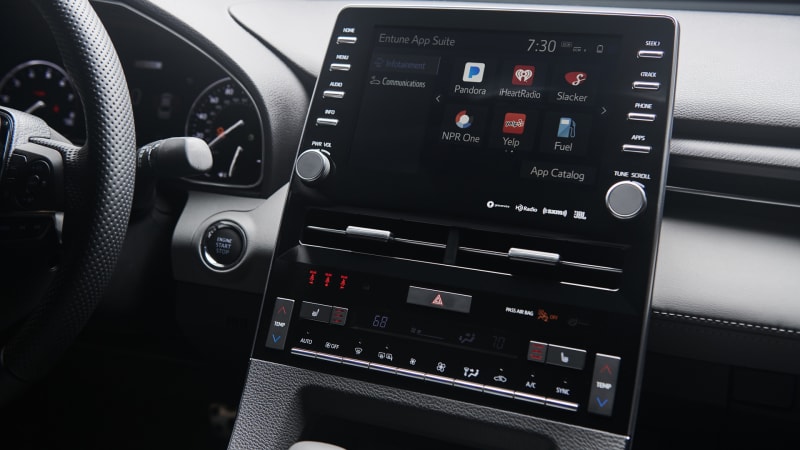 Importantly, by weighing roughly what many compact SUVs do (the RAV4 is a little bit less), it's not like customers considering multiple all-wheel-drive vehicle choices will find the new four-cylinder Avalon to have a distinct performance disadvantage. Actually, it'll be quieter than those SUVs, too, while delivering superior ride and handling that once again greatly exceeds expectations for a car long known as a gold-painted, couch-mimicking choice for senior citizens. Its precise steering, with weighting perfectly increased in Sport mode, provides a borderline-engaging sense of control, while its chassis maintains composure through corners.

The presence of all-wheel drive could in theory improve handling even further, as shunting power to the rear can certainly ease understeer when powering out of a turn. The brake-vectoring helps, too. Just don't expect an obvious improvement, and even then, as the front-wheel-drive Avalon alternatives have either 100 extra horsepower or chassis-balancing batteries weighing down the axle, you'll never get an apples-to-apples comparative opportunity as exists in the Camry.

Speaking of comparing Granny Smiths to Fujis, if you're wondering about other all-wheel-drive full-size sedans, get yourself comfy for a long, comprehensive list of possibilities: the Buick LaCrosse and Dodge Charger. Yep, that's it, but really, even that list is deceptive in length. The Buick is V6 only, likely carries a $6,000 higher price tag and will die after 2020. The Charger, meanwhile, is also V6-only, and is only available in the base SXT trim and is nowhere near as refined and luxurious as the Avalon.

Really, the main alternative is the Camry AWD. And if you're considering one of the Camry's upper trim levels and can swing a slightly higher payment, choosing the Avalon is the better choice. You get slightly more room but considerably more refinement, a higher-quality cabin and a bigger standard touchscreen that is easier to reach and read. Quite simply, it's a nicer car, and indeed, deserves far more attention than it gets. Perhaps adding all-wheel drive can do the trick because, hey, why not? 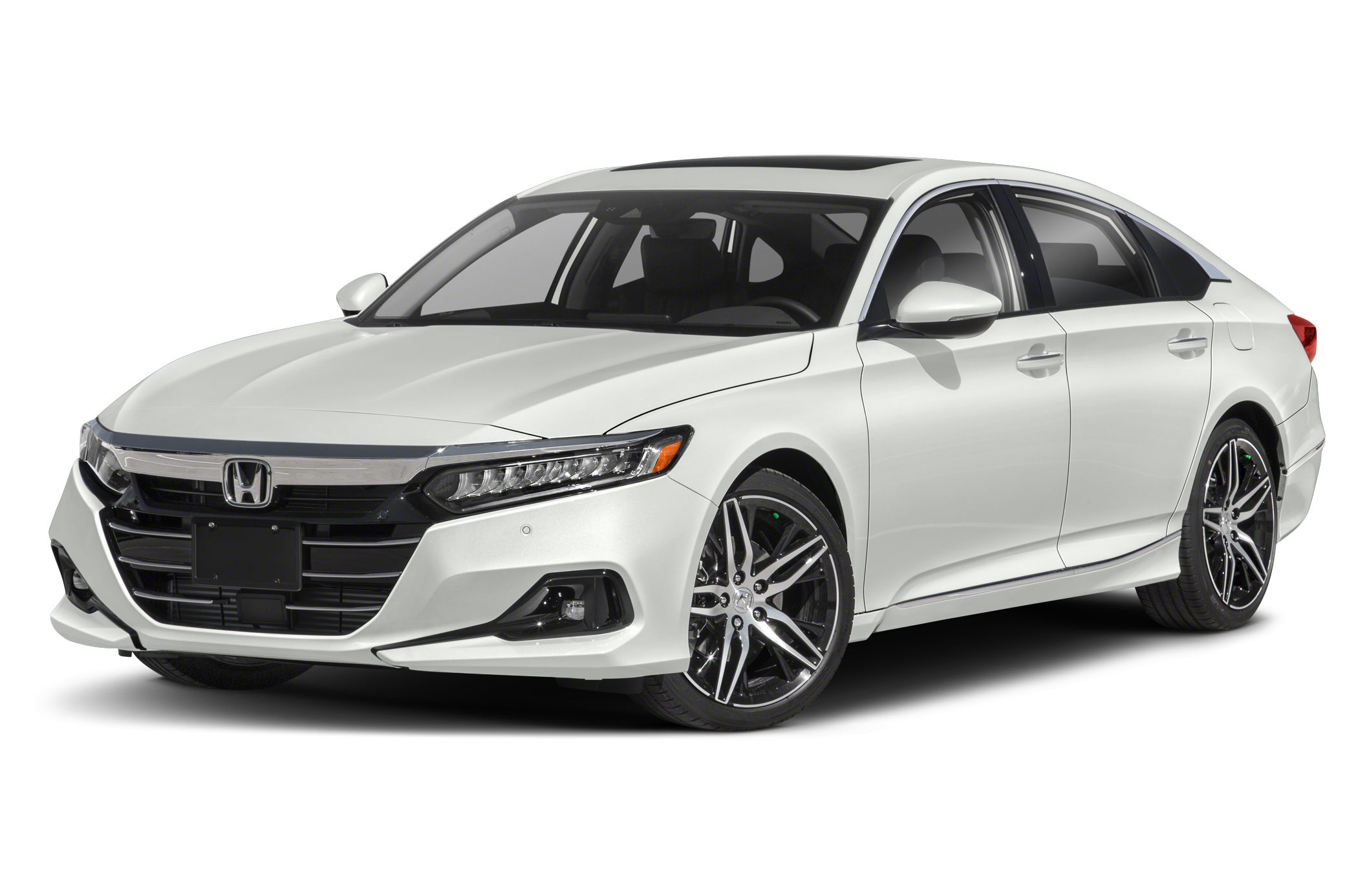 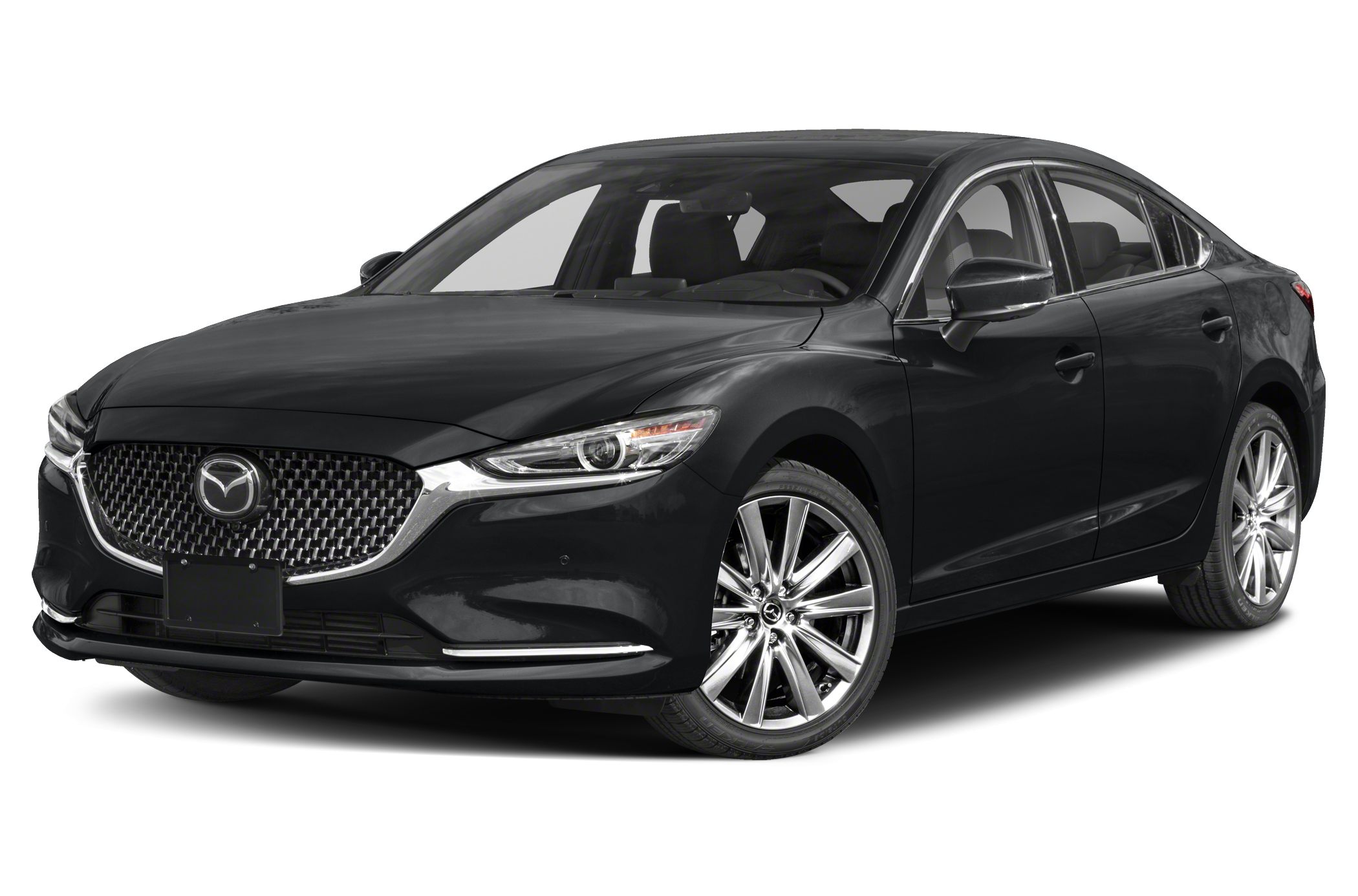 $2,697 - $3,272 Nat'l avg. savings off MSRP
See Local Pricing
I'm not in the market for a vehicle at this time. Please move this suggestion to the side for 30 days.
Huge Savings