Yes, a new wagon for the U.S. We're shocked too.

Well, how's this for a pleasant late-day surprise? We were just settling in, about to catch up on some light reading over afternoon tea, and then bam! The 591-horsepower 2020 Audi RS 6 Avant is coming to the United States.

That would be Avant, as in a wagon, and the United States, a country where wagons aren't popular and companies don't sell them. This will also be the first RS 6 Avant to come to our shores, though its sedan sibling has occasionally made an appearance. But, it's coming, we're excited and let's enjoy every second of its presence before it's shunted back to the Continent in favor of some sort of hotted up Q something or other.

Behind that angry, angular face is a 4.0-liter twin-turbo V8 good for 591 hp and 590 lb-ft of torque. For those you living in Belgium, you might be interested to know that's 40 more horses and 74 extra pound-feet than the outgoing RS 6 Avant. It will send that power through an Audi Sport-tuned eight-speed automatic and, of course, Quattro all-wheel drive that'll operate a 40/60 torque split in regular driving conditions. It can send as much as 85% of its power rearward. 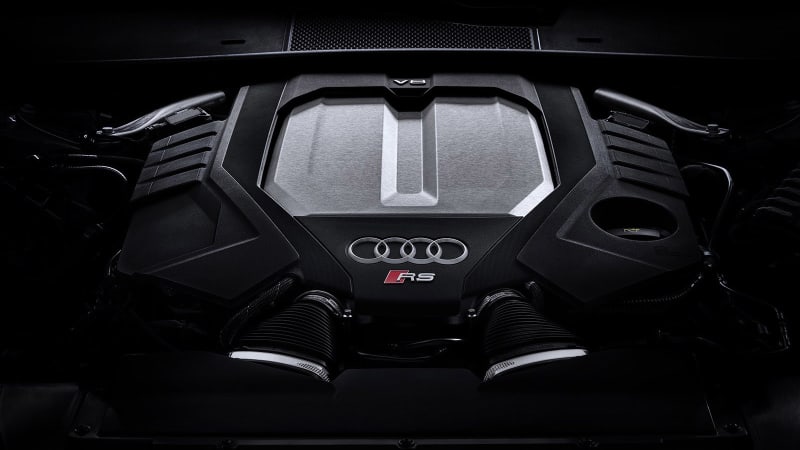 The power story doesn't end there, either, as the RS 6 Avant boasts a 48-volt mild hybrid system that enhances the automatic stop/start system for improved efficiency. There's also cylinder deactivation that shuts down half the cylinders under a steady load.

All that efficiency talk is nice and all, but this is a silly high-powered wagon, and the info you're more likely interested in is Audi Sport's 0-60-mph estimate of 3.6 seconds. That would be a half-second slower than the BMW M5 Competition, which you will note is not available as a wagon, and the Mercedes-AMG E63 S, which is. Boy, that's a comparison test we'd love to do. Someone put that on the calendar.

The enormous wheels, which look removed from a Conestoga wagon, are in fact 22-inch optional rims with a light pasting of rubber. They hang from one of two available suspensions. The standard one is a height-adjustable air suspension, which is stiffer and lower than the standard A6's. It lowers more at high speeds and can lift its nose at low ones. The optional suspension uses steel springs with variable single tube dampers. That makes them sound less fancy, but au contraire. Allow the press release to explain ...

"Hydraulic lines and a central valve link the diagonally opposed pairs of shock absorbers. When cornering at speed, the valves regulate the oil flow in the shock absorber of the spring-deflected front wheel at the outside of the curve, which helps reduce pitch and roll movement."

Nifty. The standard sport-tuned steering is also a variable system, while rear-wheel steering is an option. You can upgrade the standard steel brakes with carbon-ceramic units, presumably, for many many dollars. 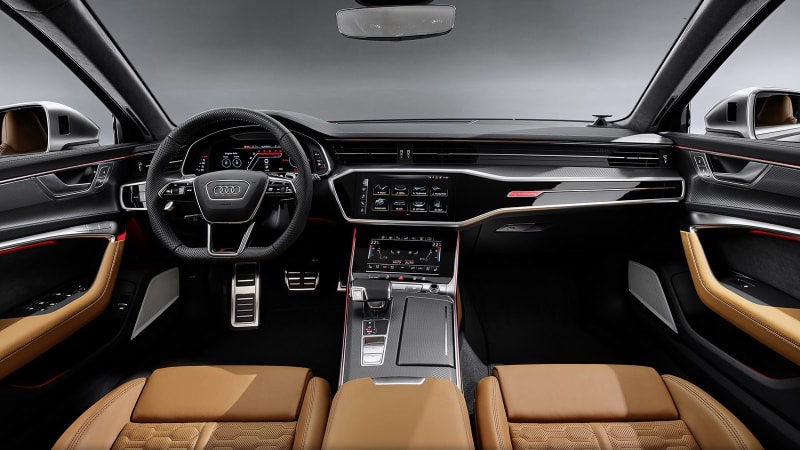 Not that we have any sort of point of reference here in the United States (hey, Audi, we wouldn't mind if you brought the regular A6 Avant over here, too), but the RS 6 Avant is wider by 1.6 inches, as you can note by the bulging fenders. The styling itself is also specific to the RS model, with a unique fascia and very aggressive rear bumper that features huge oval tailpipes wrapped in a fat piece of silver trim. Only the roof, front doors and tailgate are shared with the regular A6 Avant. It just keeps getting cooler, right?

The 2020 Audi RS 6 Avant will arrive in the United States in 2020 and will be available only as a custom-ordered car. Ah! Now, there's the catch. However, that's how the Mercedes E63 wagon has worked for years. We'll take ours in green, thank you.