Suppliers love Toyota and Honda: Why that matters to you

What does Toyota know that Nissan doesn't?

Gary S. Vasilash
You might think that a survey of automotive suppliers and their relationship with OEMs is the automotive equivalent of nerd prom. In some ways that's what the North American Automotive OEM-Supplier Working Relations Index (WRI) is. The study, the 17th annual conducted by Planning Perspectives Inc., is based on input from 652 salespeople from 108 Tier One suppliers, or, PPI points out, 40 of the top 50 automotive suppliers in North America. Suppliers to General Motors, Ford, FCA, Toyota, Honda, and Nissan.

But the results have consequences in terms of tens of millions of dollars for OEMs - and in the quality, technology, and cost of the next vehicle you buy. There are a couple of ways to look at the results of the WRI. One is, "So what else is new?" And the other is, "Damn! How did that happen?"

In the overall rankings, Toyota is on top for the 15 th time in 17 years, with a score of 328. Honda, the only company to best Toyota (in 2009 and 2010), comes in second, at 319. Those two companies, explains John Henke, president of PPI, have collaborative working arrangements with colleagues and suppliers alike built into the very fabric of their cultures. 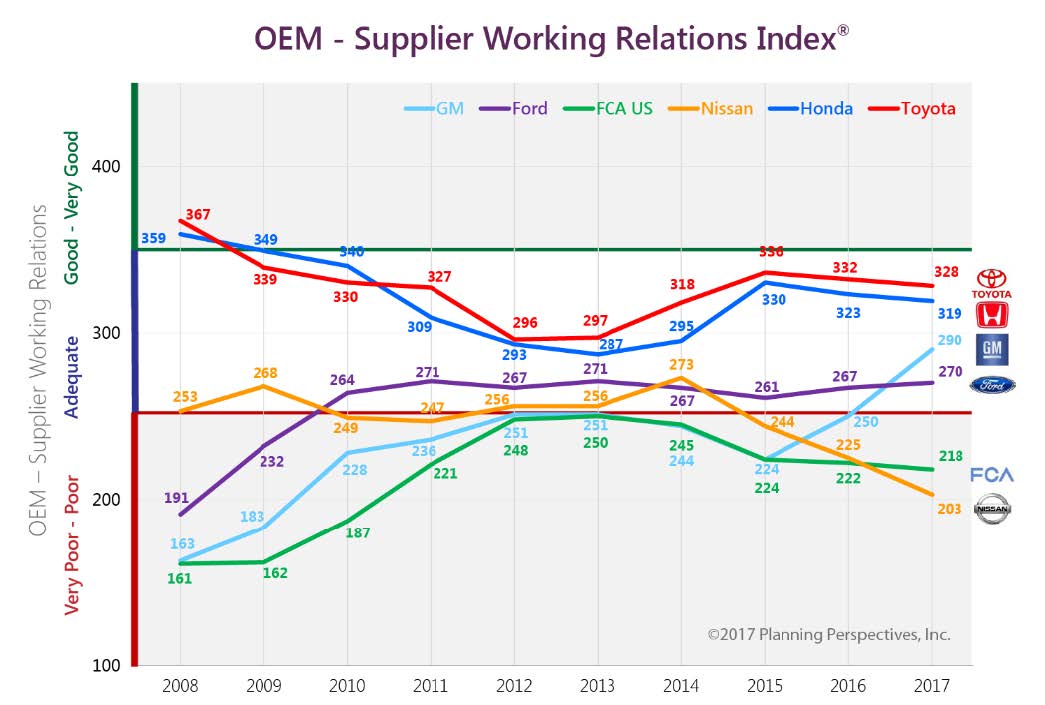 This, however, is not a situation where one can readily conclude it is about "Japanese companies," because the third company with headquarters on the island of Honshu, Nissan, came in dead last. This is the "How did that happen?" portion.

The Nissan score of 203 puts it 125 points behind Toyota. There hasn't been a number that low since the then-Chrysler Corp. scored 187 in 2010, when the company was clawing its way out of the recession. Clearly, the suppliers don't feel particularly engaged by the buyers at Nissan.

Henke explains that whether a company does well or not on the WRI is rather simple. All people do things based on what they're measured on. "If you're measured on taking 10% out of your annual buy, you immediately know how to do it. But if you're also measured on improving relations, suddenly there is a new dynamic as to what you can do to achieve both. If that performance metric about improving relations isn't there, then you're going to be nasty and mean as you can to get that cost down." 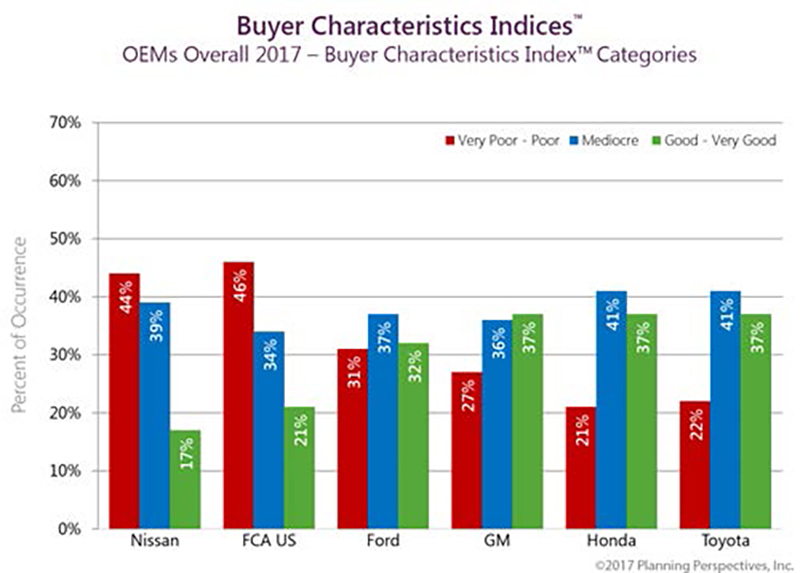 And while the adversarial approach to getting costs out of suppliers may allow some people to make their numbers and keep their jobs, Henke says, "It is unfortunate because we are able to show the relationship between the level of collaborative relations and profitability. So they may have gotten a little more in price concessions but lost a lot of benefits that they could be translated into more efficient and effective operations."


Save a nickel now. Pay a dollar later.

"We are able to show the relationship between the level of collaborative relations and profitability." -John Henke, PPI


General Motors has its best-ever results in the 2017 WRI, with a score of 290. Henke points out that this is the first time that GM has outperformed Ford in the index. Whereas GM zoomed from 250 last year, growing 40 points, Ford moved forward just three, from 267 to 270.

So what does this mean to the vehicle-buying public?

Those two elements alone can lead one to believe that the OEMs with the best engineering and the best technology are more likely to produce cars and trucks that are better than those produced by companies that are doing their utmost to berate their suppliers.

There is one number in the PPI study that ought to give some people at OEMs a Mylanta moment. Arguably, as there is greater electronic and electrical content in vehicles for both powertrain and automated driver assistance, there is likely to be a greater dependence by OEMs on suppliers. Let's face it: For most of its history, the auto industry has been about gears and sheetmetal, not software and sensors.

If suppliers of electrical and electronic systems and suchlike rank Toyota so highly, what is the likelihood that it is going to get the latest tech? And if tech becomes the key differentiator when it comes to whether to buy a vehicle, then clearly there is more than a little something to be said for collaboration.

[ The full press release and detailed summary of the survey can be found here.]