And one that doesn't.

Alex Kierstein
There's an air of disbelief around the rumors of Citroen's sub-brand, DS, coming to the US, and yet we hear a steady dripping of tidbits on that topic. Since we were in Paris anyways for this auto show you might have heard about, a couple of Autoblog editors swung by the major French automaker booths to evaluate which brand-new cars might appeal to the US market. We were a little surprised by what we found.

We're not on board with the Citroen DS 
Let's start with a brand that didn't make the cut. Despite being at the center of the gossip that sent us to these booths in the first place, the upscale DS hatches didn't cut the mustard. The odd mix of cheap interior plastics, uninspired designs, and lack of charm conspired to baffle us. Who is thinking these would sell well in the US, and why? With an understanding of the demands that US consumers make on small, premium cars, the DS3 (in the gallery above), DS4, and DS5 seem entirely unsuited to American tastes.

But the Citroen C3 is a yes 
We had the opposite reaction to the rest of the cars in this list. Let's start with the Citroen C3, which is related to the DS3 and also the Peugeot 208. Part of its appeal is the concept car styling, even though the photo above is of a production car. The C3 can be customized in a bunch of exterior colors and configurations, including the raised door cladding and the Mini-like contrasting roof. Check out the wheels, which are unlike anything we've seen. (Car nerds will remember the Saturn Ion's four-spoke wheels. These are a better take on the square theme. ) Inside is a wonderful and fascinating combination of textures, materials, and patterns. Even the door pull straps and dash vents are compelling. It looks more upscale inside than the DS models, in an avant garde way that's reminiscent of the BMW i3. The front styling is more distinctive than beautiful, but it also appears tough and even rugged. Give this hatch the CUV treatment with some contrasting lower body paint and a slight lift and we think it'd steal sales from urban utilities like the Kia Soul and Honda HR-V.

And the Peugeot 5008 is pretty neat 
The Peugeot 5008 doesn't need to adopt an SUV pose, because it's already positioned as a crossover and people-mover. Small three-rows are hot right now, and automakers are scrambling to produce vehicles for a segment that used to get shrugs. Consider the upcoming long-wheelbase VW Tiguan as an example. Space in the third row of the 5008, like anything else this size, is tight to the point of almost being useless, but the seats do fold flat to form a large cargo space. The real showpiece is the center console, which is studded with flashy metal-finish toggles that control the infotainment modes and access climate control functions on the tablet-style center screen. They're beautiful to look at and a pleasure to use. A small, flat-bottomed wheel is located entirely below the high-positioned but slim gauge cluster, so there's no obstruction. A fantastic textured fabric is stretched over part of the dash as an accent. The front seats are also astonishingly comfortable, supportive and well-bolstered. Outside, there's a distinctive front fascia and enough brightwork to put it on the same style-forward level as utilities like the Range Rover Evoque.

We have a soft spot for a French pickup 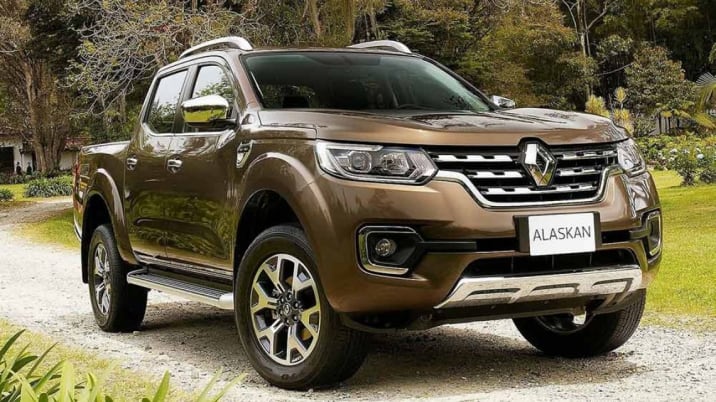 The last one's a bit of a stretch, because it's not entirely French, but if you're into trucks you won't mind. The Renault Alaskan is basically a restyled Nissan Navara, and it's also Renault's first proper pickup. Previously the Frontier sold in the US was basically the same vehicle as the Navara. But the new NP300 Navara and its Alaskan twin are more like the international Ford Ranger, Toyota Hilux, and Isuzu D-Max – bigger, more rugged, and available mostly as quad-cabs. The new Frontier will share some structure with the NP300, but we hear it needs some re-engineering to suit American tastes for refinement. There could still be enough in common that some enterprising francophile could swap the front end and badges and be rocking a nearly genuine Renault truck in the States. Strange rebadges aside, the Navara's swoopy lines actually translate well into the Renault lineup, and there's little doubt it's capable: there's a proper ladder frame underneath and an available twin-turbocharged 2.3-liter diesel engine. Wouldn't that make a Colorado Duramax owner green with envy?

Reality check: don't hold your breath for French cars in the US

The takeaway here is that modern French cars in the flesh, aren't quite the quirky things we were ready to dismiss out of hand as unsuitable for Americans. While it'd take a test drive to figure out if they'd really pass muster, the C3, 5008, and Alaskan hold up to close in-person examination. Don't hold your breath for them to make it to America, but if you have a chance to rent one on a European vacation pay close attention.