Audi and BMW have owned the premium C-segment for almost a decade now thanks to the A3 and the 1 Series (and 2 Series). Benz's A-Class has become less of a retiree's option and has spawned a popular (if not particularly good) sedan (the CLA) and a crossover (GLA). Down in the lower-class decks, machinery from Subaru is punching well above its weight, while Volkswagen's Golf owns the market in Europe.

This all left perennial premium pretenders like Lexus and Infiniti with a problem: how to convince buyers their C-segment machinery was genuinely premium if they were based off a volume-selling donor body from Toyota or Nissan?

Mercedes-Benz opened an odd window of opportunity for Infiniti. See, Benz's parent, Daimler, and Infiniti's motherships, Renault and Nissan, have had a technical alliance since 2010. A big technical alliance. So Infiniti was able to develop its hatch to sit atop the A-Class chassis, powertrain, and suspension architecture, though you'd barely know it by looking at the Infiniti from the outside. It has a style all its own, and you're not going to mistake a single angle on the Q30 for anything that comes out of Stuttgart. Nobody makes deeper cuts and curves into its metal than Infiniti. The Japanese brand claims that design is at its core, and whether you love or hate that design, it's hard to argue that point. 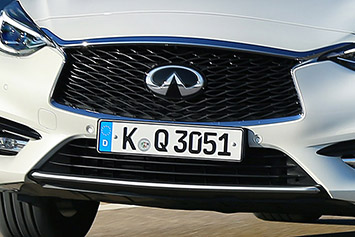 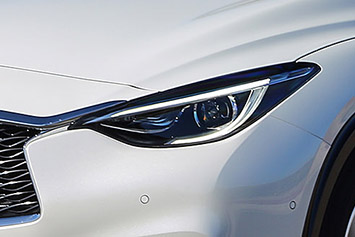 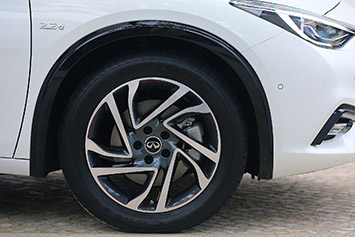 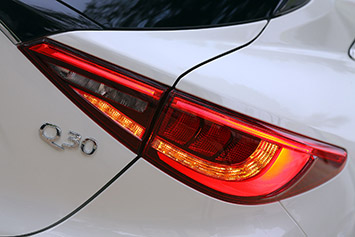 The Q30 feels like a nicer, easier, more luxurious place than the A-Class on which its based.

"Infiniti design is very three-dimensional on every panel. We want to give the sense and the feeling that every Infiniti has been made by an artisan, by hand, not by computer," the company's London-based design boss, Simon Cox, argued.

Some will love it, some will hate it, and Infiniti can live with it either way. The point is that the brand is now on the field in a segment that is projected to keep growing at more than 9.4 percent globally, and it got there at a fraction of the normal cost of an all-new car, without having any easily identifiable cap tips to the Benz's far more conservative exterior design.

The Benz bits are more obvious inside. Infiniti did such a good job of grafting its design ideas onto the interior hard points that it feels like a nicer, easier, more luxurious place than the A-Class, even if the Benz will be between eight and 10 percent more expensive in most markets.

The dash top is clean, swooping, and stitched together beautifully. It adopts Infiniti's multimedia setup, and the seats are magnificently comfortable and supportive. There are breakdowns, though. The bottom half of the dashboard is where the hard, cheaper plastic lives, all the core switchgear (windows, mirror adjustment, etc.) are carried over from the A-Class and even the instrument cluster's info screen uses the exact font you find in the Mercedes. 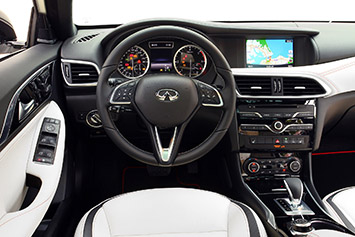 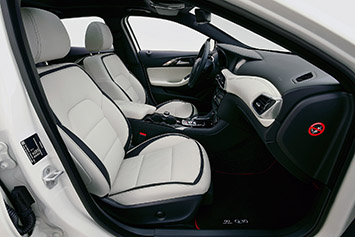 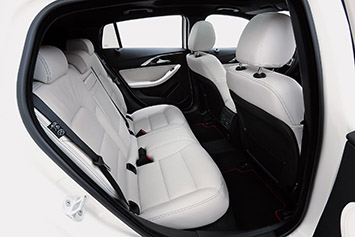 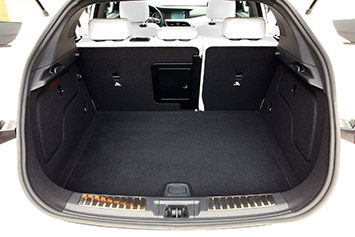 The data says the Q30 2.0T AWD Sport gets to 62 miles per hour in 7.3 seconds, but it never actually feels that quick.

The alliance (which is often whispered in a Star Wars kind of way) has given Infiniti a turbocharged 2.0-liter gasoline inline four-cylinder engine. Mated to a viscous-coupling all-wheel-drive system and a seven-speed dual-clutch transmission, it's a cheerful enough customer that never seems tempted to verge into sweetness. It's calm at low engine speeds and strong at low revs.

The data says the Q30 2.0T AWD Sport gets to 62 miles per hour in 7.3 seconds, but it never actually feels that quick. Instead, it feels more flexible than an out-and-out sprinter. It's happier to rely on the 258 pound-feet of torque than the 208 horsepower at the top end, and it gets breathless at 5,500 rpm, when there's still a 1,000 rpm of engine speed left to tap.

The seven-speed transmission is at its best when it's left alone, preferably in Sport. The only issue is that for all the crisp shifting and predictive cleverness, it can get a bit boy-racer in low-speed city situations. And the car is too slow to react to its paddle shifters (Mercedes-Benz's fault, not Infiniti's), so you tend to leave it in the standard mode in traffic.

Infiniti says it tested more than 50 spring and damper settings before arriving at two for the Q30 (one for the 3,407-pound gas version and one for the heavier diesels). It's not perfect, but even Benz engineers admit there's only so much that can be done with the core architecture. 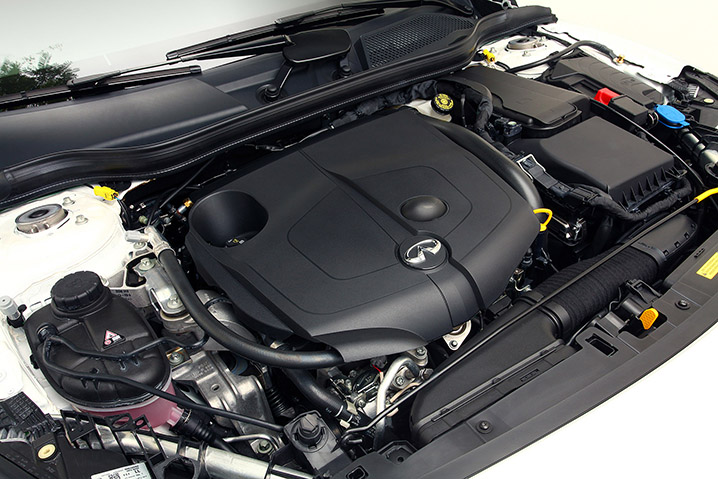 The steering is linear and comfortably weighted, but it's not chatty or sharp.

The steering is linear and comfortably weighted without being chatty or sharp. The handling is reliable and progressive, but the body roll is significant and you never feel there's a risk of a sparkle there. While the ride is usually good, on more severe road imperfections a fair amount bump-thump can crash through the gatekeepers and into the cabin, especially from the rear end.

Pushed even moderately hard, the Q30 will run out of grip at the front, but it happens so gently and progressively that it can be easily recovered by the most modestly talented of drivers. Either lift off the throttle, brake, or simply rely on the all-wheel-drive system (which can send 50 percent of the drive to the rear) and the Q30 is pulled back into line. It's not necessarily a fault with the run-flat 235/45R19 tires, though, because there's only so far this architecture can be pushed – and it's near its limits here.

Inside of all that, you find a compact hatchback with all the limitations of the A-Class. The rear seat knee room is bad, too much headroom is lost where the roofline comes in above the door, and any middle passenger is not going to enjoy finding a place for their knees or shoulders. Or their knees in their shoulders. It's a better story up front, where there is plenty of adjustment for the very comfortable seats (all Infiniti's own work, and a step up from the Mercedes offerings) and good forward visibility, no matter how tall the occupants are. 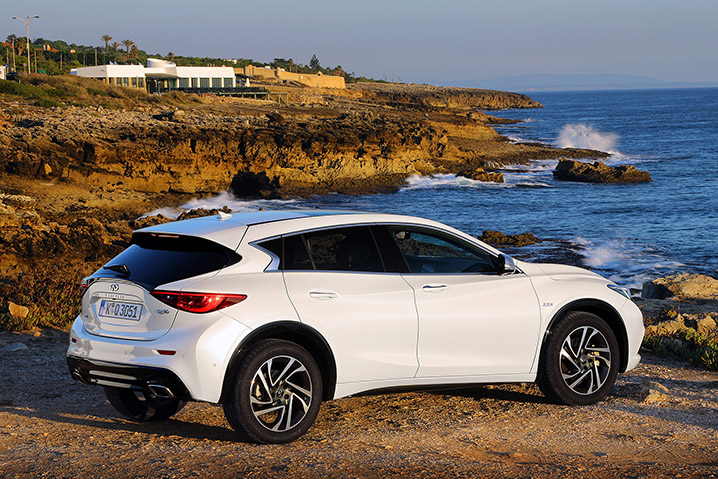 If this architecture is good enough to sell A-Classes, then it should sell Q30s.

The biggest issue, though, is side and rear visibility. The rear glass is small and if the C-pillars are very difficult to see around, they've got nothing on the thick B-pillars, which make good sightlines harder than necessary at blind junctions and even on lane changes. But there's good news in the hatch – it's flat, practical, and has a wide opening, and there's a 60/40 split fold in the rear seats when you need more real estate.

Infiniti's pricing will be different around the world, though it suggests its versions will cost between eight and 10 percent less than the A-Class, engine-for-engine. Is the Q30 good enough to bring Infiniti to where it wants to be? Intrinsically, yes. If this architecture is good enough to sell A-Classes, then it should sell Q30s. That reckons without the differences in the power of the Infiniti and Mercedes-Benz badges, though, and the differences in the marketing muscle of the two operations.

Oddly, the main areas where the Q30 falls just short of its targets and its premium ambitions aren't its own doing, but Daimler's. But most people who do come to the Infiniti brand through the Q30 will come with their eyes open, and they'll be pretty comfortable with what they find.