Steven J. Ewing
It's been a little over a year since General Motors first told us that an all-electric version of the Chevrolet Spark would be heading to the United States. And now, The General has confirmed that the little EV will debut at the Los Angeles Auto Show later this month.

Chevrolet isn't spilling any details on the Spark EV just yet, only stating that the vehicle "will offer consumers the same package that has made the gasoline-powered model so popular while delivering the technology and performance of pure electric power." Not much to talk about there, and the only bits of information divulged previously are that the Spark EV will be sold in "limited quantities in select US and global markets" and that the nanophosphate lithium-ion battery packs will be supplied by A123 Systems.

In other LA Auto Show news, GM will be showing off an updated version of the Chevrolet MyLink system that will debut in the 2014 Impala. The refreshed system offers higher levels of personalization and improved smartphone integration. Scroll down for all the details.
Show full PR text
Chevrolet to Debut Spark EV at LA Auto Show

DETROIT – Chevrolet will unveil the plug-in electric version of the brand's popular new Spark mini car at the Los Angeles Auto Show later this month. The Spark EV is one of 13 new or significantly redesigned products that Chevrolet will be launching in 2013.

Chevrolet will also showcase the expanded functionality of an advanced version of MyLink, which will be available first in the all-new 2014 Impala full-size sedan.

"Chevrolet continues to build on the momentum of eight consecutive quarters of record global sales with the introduction of more new products, features and technologies that are designed to offer consumers exceptional functionality, comfort and convenience," said, Chris Perry, vice president of Global Chevrolet Marketing.

"The Spark EV and next-generation of MyLink demonstrate Chevrolet's commitment to delivering the advanced technologies that today's consumers will be eager to adopt and truly value," Perry said.

The Spark has won over U.S. consumers with its expressive design, roomy interior and MyLink connectivity. In its first three months on sale, the Spark has delivered strong results, particularly in the Los Angeles market. Building on that success, the plug-in electric version of the Spark EV will offer consumers the same package that has made the gasoline-powered model so popular while delivering the technology and performance of pure electric power. 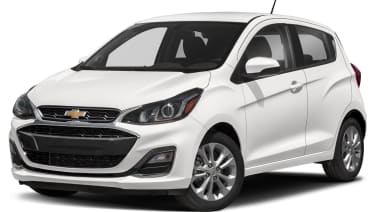 $361 - $945 Nat'l avg. savings off MSRP
See Local Pricing
I'm not in the market for a vehicle at this time. Please move this suggestion to the side for 30 days.
Huge Savings