We like the Badlands, as it turns out. Oh, and Cyber Orange

The 2021 Ford Bronco and Bronco Sport microsites went live on Ford's homepage Monday night, but so far, the only "Build and Price" tool that is fully functional is that for the Bronco Sport. Now that the "stampede" of traffic to Ford's build site has subsided, we decided to peruse the configurator and spec out a Bronco Sport the way we'd want it — you know, for science.

It may not be the star of the new Ford sub-brand, but the Bronco Sport is nonetheless interesting. Besides, we were curious to see if its price increases as sharply with options as its platform sibling, the Ford Escape. As it turns out, Autoblog staffers really like orange. If you can't access Ford's microsites and you'd like to play along at home (or wherever you're sheltering in place these days), you can use out our 2021 Ford Bronco Sport trim breakdown as a reference. 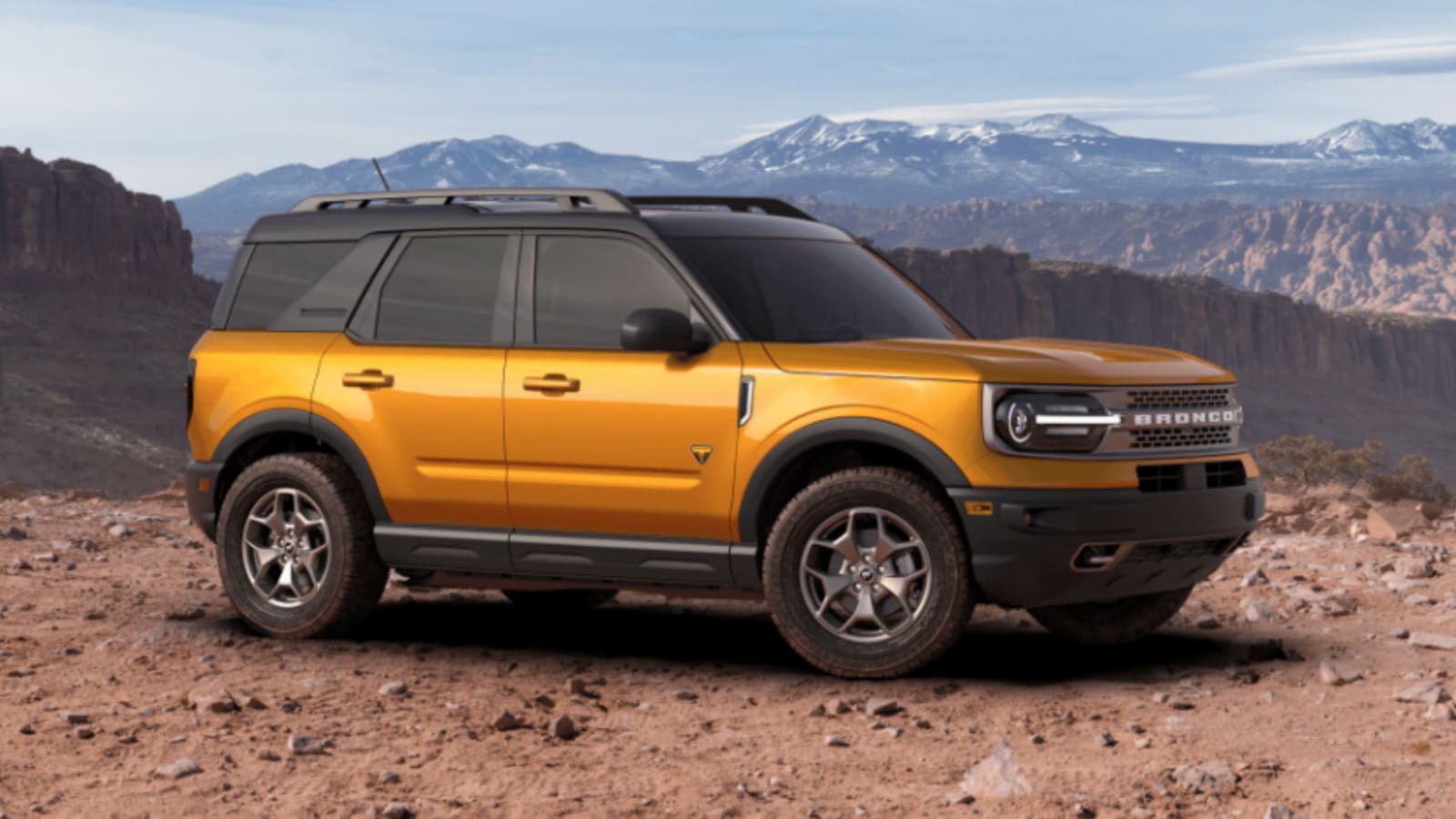 Managing Editor Greg Rasa: I would have preferred a more base model Bronco Sport — but had to step up to Badlands trim to get Cyber Orange and the 2.0 EcoBoost. While Kodiak Brown or Antimatter Blue might have been good choices, I know the orange will look great, especially with the black roof and cladding.

I got the $130 cargo mat and $200 floor liners and appreciate that they also come with carpeted floor coverings for when you want to dress the rig up. I did not appreciate having to purchase the $2,595 Badlands Package to get a moonroof, but if the roof on this thing won't come off, then I need a moonroof.

Skipped the 360Assist Package, saving $795, because I literally don't use (and barely trust) features like adaptive cruise. So yes, I'm old. And we're stuck with it, but doesn't a $1,495 destination charge seem high?

All in, my build was $37,675. But I wanted something basic — with a stick shift. So maybe it's the big Bronco I really want. 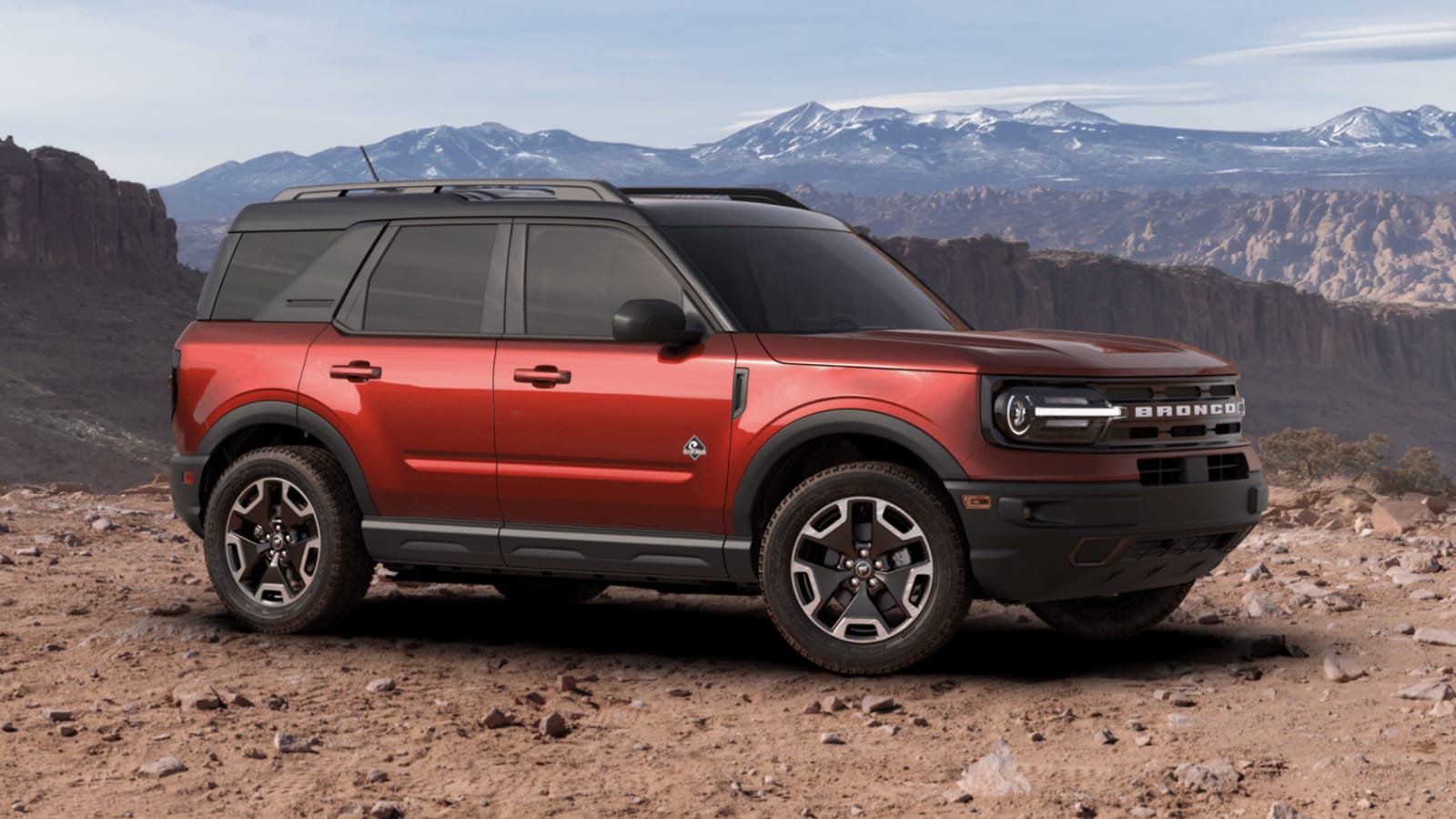 Video Production Manager Eddie Sabatini: Okay, so I'm not nearly as excited about Sport as I am for the 2-door Bronco but configurator tools are fun and these are fake dollars so let's have some fun. These builds aren't legally binding, right?

I'm going with a Rapid Red Outer Banks for my 2021 Ford Bronco Sport. I think the black roof looks sharp with the red. I know my colleagues are probably mostly going with the more off-road capable Badlands model, and while it is cool, and the better option for the off-roading enthusiast looking for out-of-the-box performance, I would be lying if I said I was gonna take this thing camping or climbing or even off a road that was tougher than the dirt roads at my local apple orchards. The only option I added was to the interior — the cargo mat — because that'll keep the truck looking good when I make hardware store runs. Also, the Outer Banks gives me the creature comforts I crave, like a heated steering wheel. 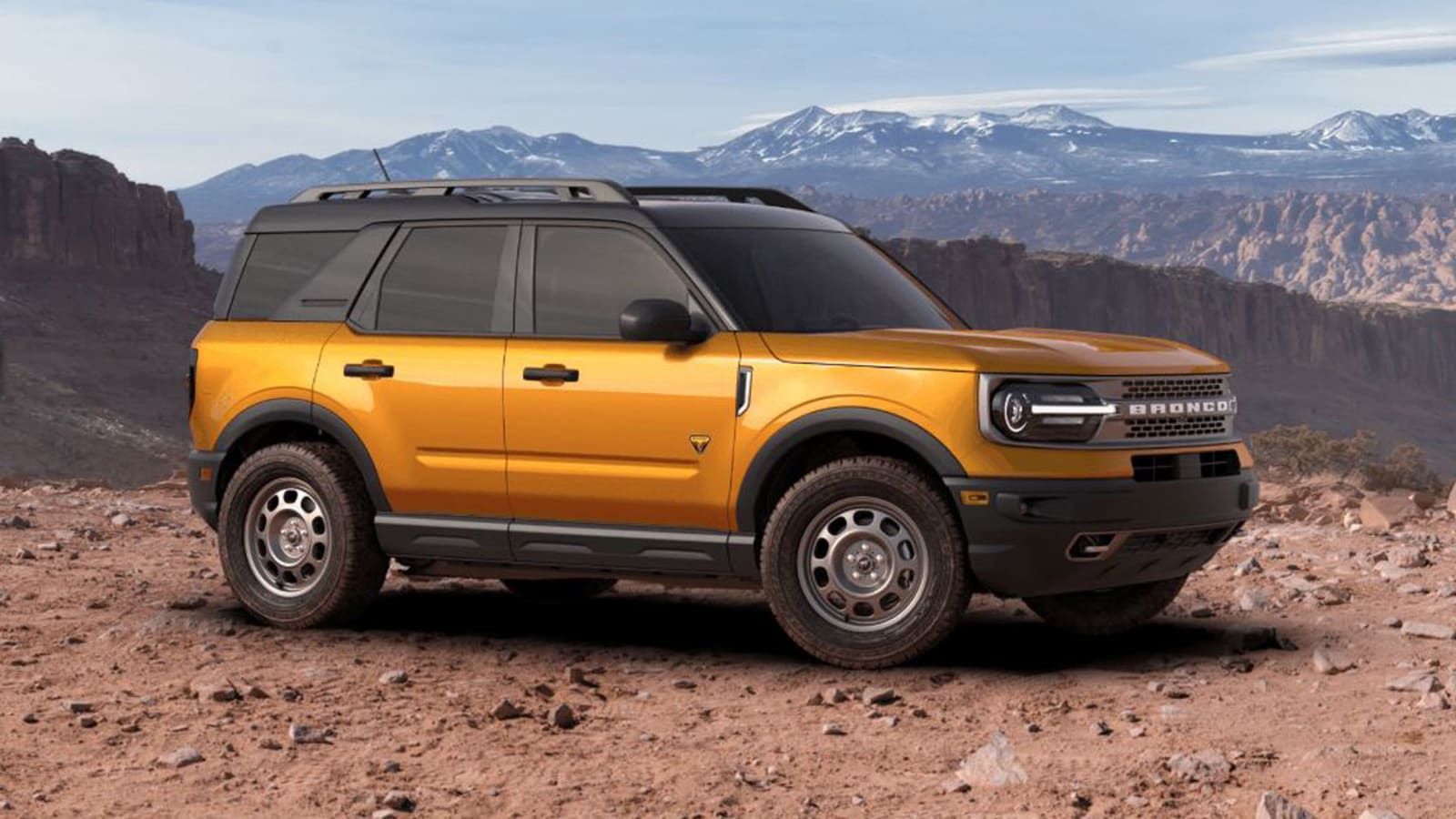 Associate Editor Byron Hurd: This was a pretty easy and straightforward build for me. Unlike its bigger brother, the Bronco Sport's powertrain configurations are pretty much fixed, so there really aren't too many choices to make. I essentially had two goals going into this build: Keep it to $35,000 or so on the top end, and make sure it's a sleek color.

The Badlands is probably the most appealing variant here on spec, but it starts at $34,155 (including the pesky $1,495 destination fee), which didn't exactly leave me a lot of headroom for options. Fortunately, the two that I really cared about — the steel-look alloy wheels and Cyber Orange paint finish you can see in the image above — were relatively inexpensive. Since the Badlands model bakes in an off-road suspension and the high-output, 2.0-liter turbo engine, I'm feeling pretty good about not ticking any more boxes.

The total? $35,050. Yeah, technically I'm over my limit, but I can raid my beer money fund for the $50 if it means I get Cyber Orange and fake steelies. Hash-tag-priorities. 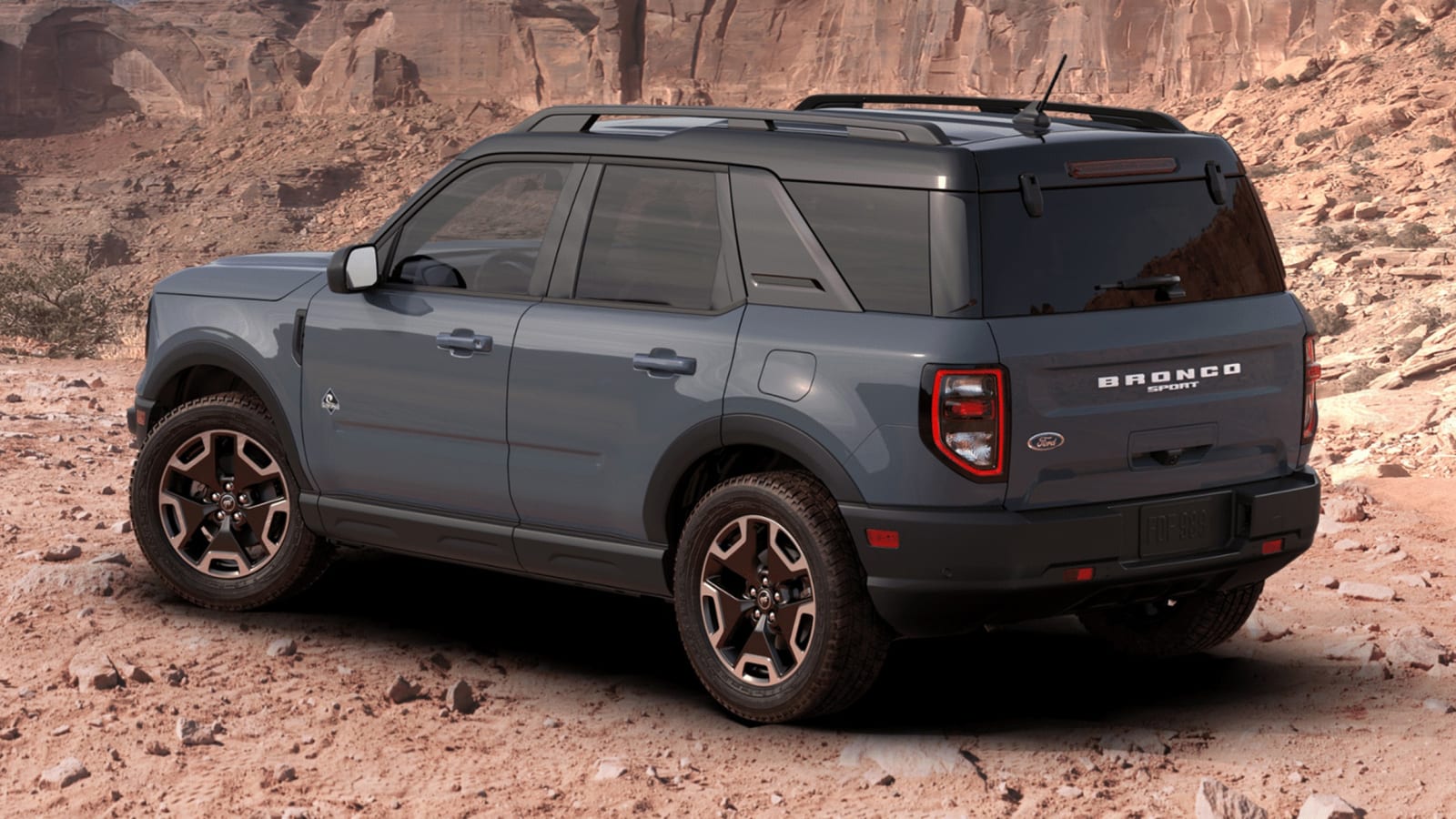 News Editor Joel Stocksdale: Building out my Bronco Sport was a bit frustrating because of limited color and interior choices unless you spring for a high-trim Outer Banks or Badlands. The base model has four colors, or more accurately not-colors: black, silver, dark silver and white. The next trim up has more variety, but you can't get the sharp contrast-color roof, and you're stuck with drab black or gray cloth interiors. So that pushed me to the aforementioned high trim levels.

I was initially inclined to build a Badlands since it gets the best all-wheel-drive system and the most powerful 2.0-liter engine. But I was realizing that I probably wouldn't want to take a mid-to-high-$30k crossover seriously off-roading. And options like a sunroof are locked in an expensive package on the Badlands trim. So Outer Banks it was.

I picked mine in the lovely blue-gray hue called "Area 51," and it's matched with a sweet dark blue and black leather interior called "Navy Pier." The package that adds the sunroof is about $1,000 less on the Outer Banks than the Badlands, and while I don't need it, the B&O sound system is something I'll still enjoy. I also skipped all the accessories because I'm never going to use them. And even though I'm getting less power, hopefully I'll get better fuel economy. And between that and the savings over a Badlands, maybe I could afford a dirt cheap used trail truck or SUV if I want to go to an off-road park. Of course if I was really spending this money, I probably would prefer to buy a big Bronco with a manual transmission. 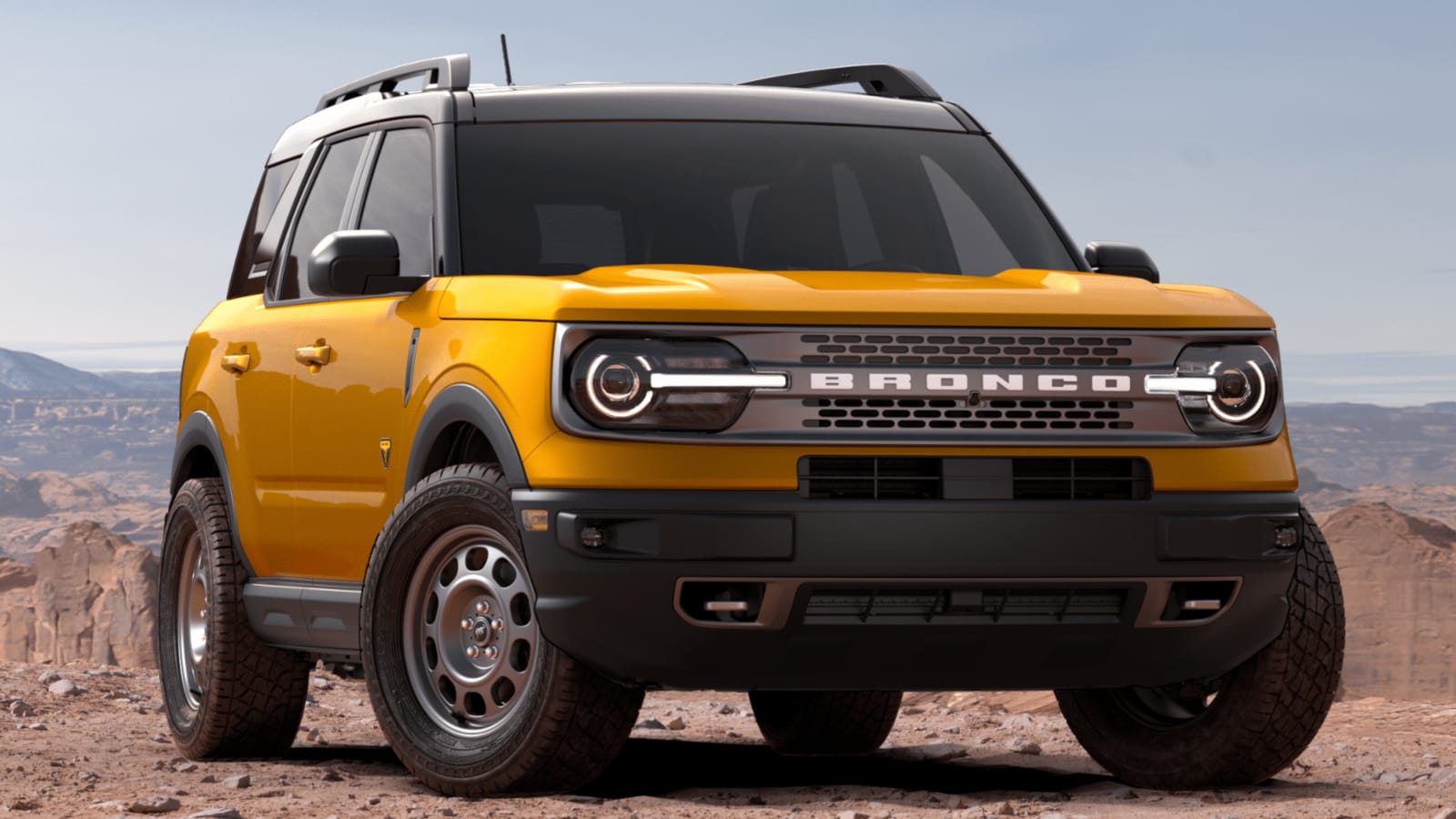 Road Test Editor Zac Palmer: Ford only puts its torque vectoring four-wheel-drive system on the Badlands and First Edition Bronco Sports, and if I’m buying something with the Bronco name on it, I’m going for the most capable of the bunch. Plus, the 2.0-turbo should prove itself to be much more fun than the little three-cylinder. Badlands it is.

I went with Cyber Orange, because it’s a cheerful color, and I love orange cars. The steel-look wheels were a no-brainer over the aluminum wheels. Ford’s packaging forced my hand with the big dollar items, though. If you want any of the individual luxuries like a heated steering wheel, wireless phone charger or others, you’re forced to select the “Badlands Package” for $2,595. I don’t want the leather seats that come with it, but I did want most of the others. Therefore, I reluctantly gave that box a check. And since this is the Bronco Sport (that’d likely see daily driver duties), I had to check the Ford Co-Pilot 360 box since it’s the only way to get adaptive cruise control. Besides that, I added the mud flaps and floor liners, which seem like no-brainers for this kind of a vehicle.

All that added up to $38,860, a scary price for a compact crossover. For that much coin, I think I’d just have a sparsely equipped big Bronco and pass on all the luxuries. 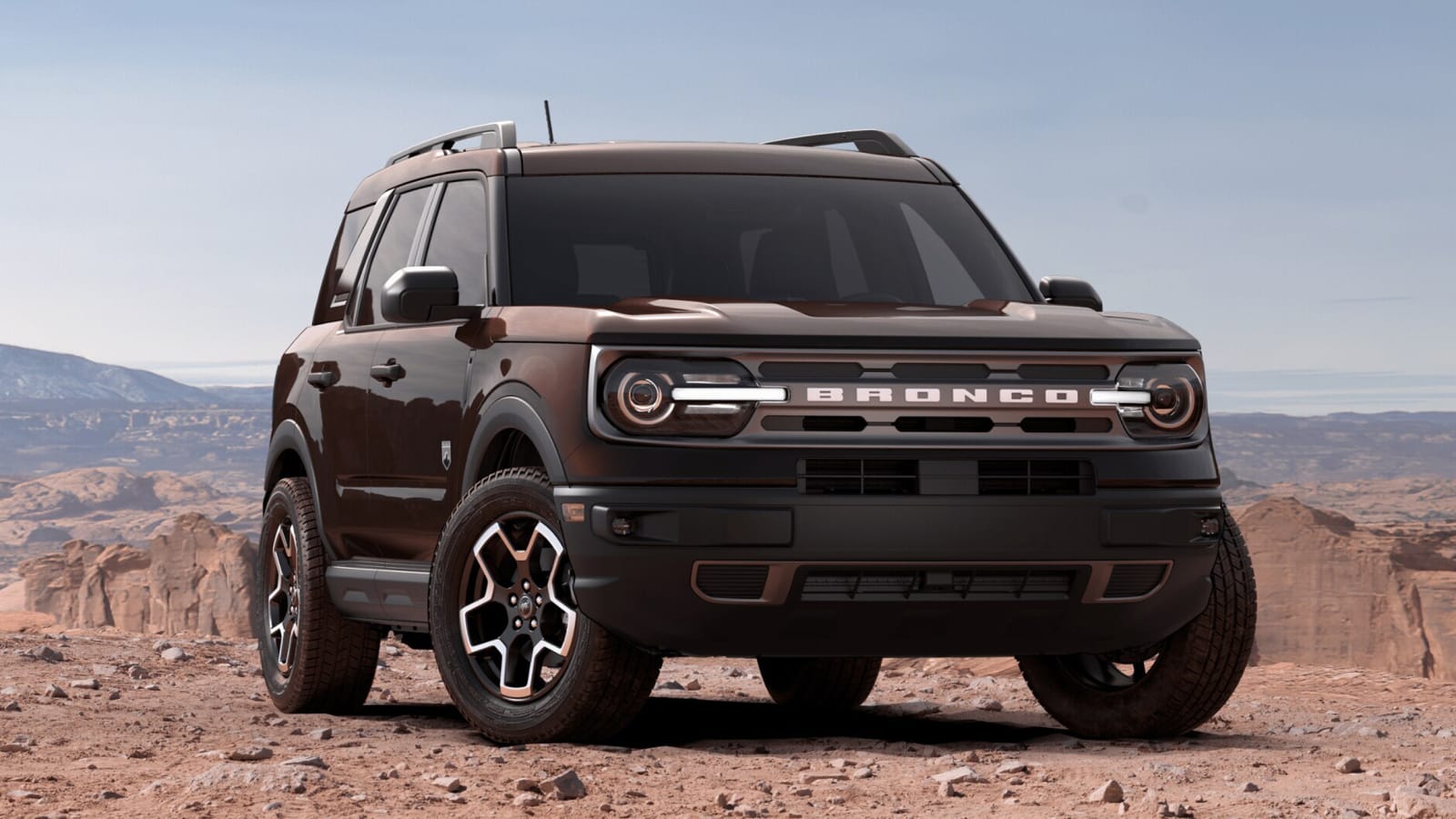 Senior Producer Christopher McGraw: I originally went with the same Bronco Sport that everyone went with, Badlands/Orange. So instead of being like everyone else, I decided to go back to the drawing board and try and make the cheapest Bronco Sport I could, but one that I would still want to buy.

I tried my best to be okay with the Base, but it just wasn’t enough, so I had to move up one level to the Big Bend. With that I was able to get Kodiak Brown and upgrade the wheels and tires. I kept the interior dark (hides stains better) and the only other options I went with were the cargo and floor mats.

Sure, in order to fit my bike rack I’ll have to install a hitch, but I can do that fairly easily myself, and while I thought about adding the roof rail cross bars, I can always look to the aftermarket for those, plus I want to make sure that the ones I get will be able to hold enough weight. Right now I use my current rails for a basket, SUPs, and sometimes kayaks, so that’s important to me. And if I’m being honest, a roof top tent is in my very near future.

With just under a grand in options, and $1495 in destination fees, that brings my Bronco Sport to $30,580, which, assuming a two-year depreciation of 25%, means this Ford will only cost me a hair under $23k on the used market. 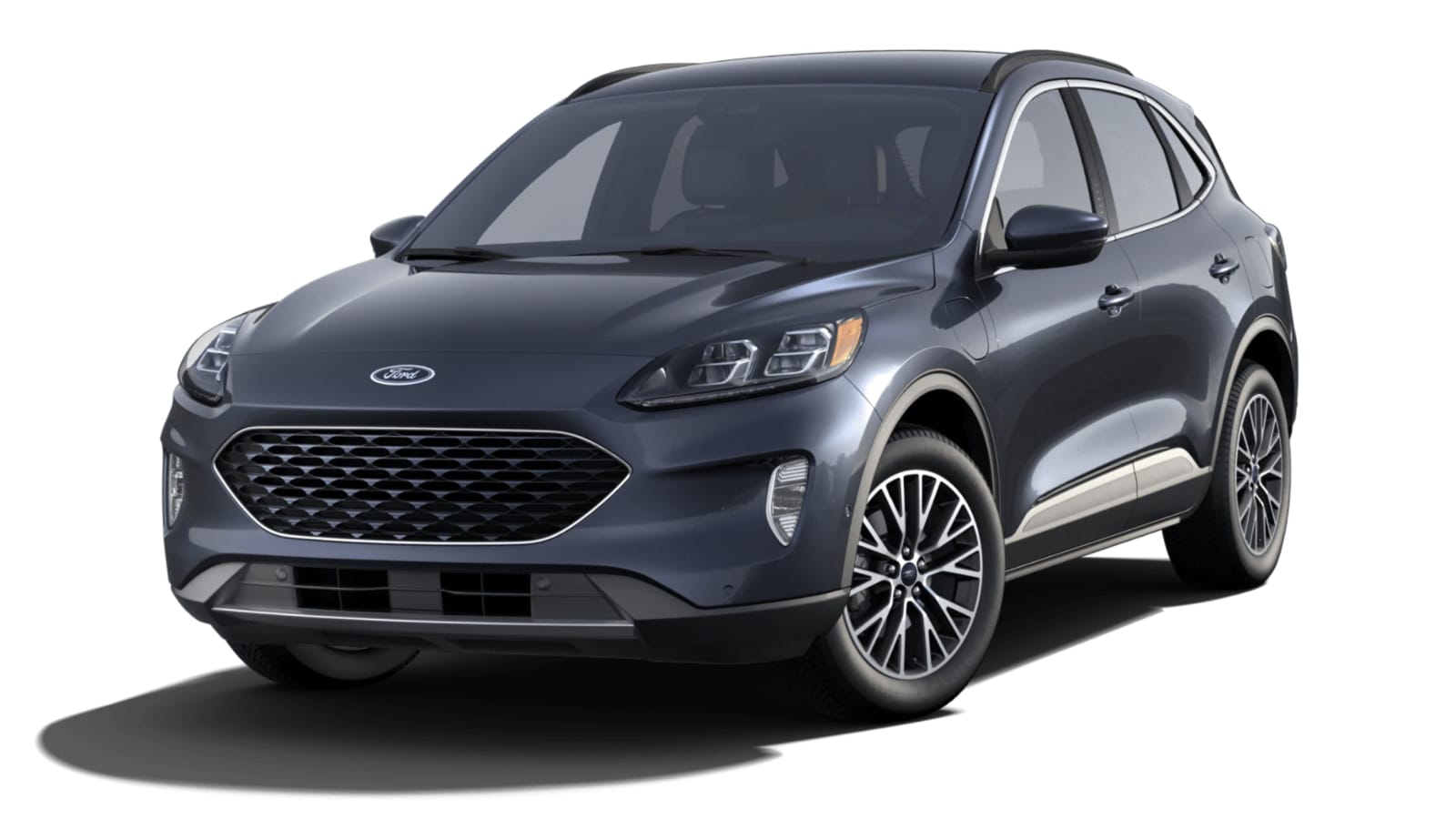 Senior Editor, Green, John Beltz Snyder: I like the way the Bronco Sport looks, but underneath it all lurks an Escape, and not the Escape I want. Instead, I'd pick an Escape Titanium Plug-In Hybrid. I'm not gonna take the Bronco Sport off-road. I'd buy the two-door Bronco for that (and that's a ute that actually does interest me), and if forced into a Bronco Sport, I'd spec it for comfort and tech. Instead, this Escape is loaded up in the Titanium trim level. It seems a bit expensive at $40,080, but it's got more creature comforts and better milage than the Mercedes-GLK Bluetec currently sitting in my driveway. Plus, with a $6,843 federal tax credit, I'm sitting pretty at $33,237. See you crawlers at the mall, but I'll be parked at the charging station next to the front door, suckers. 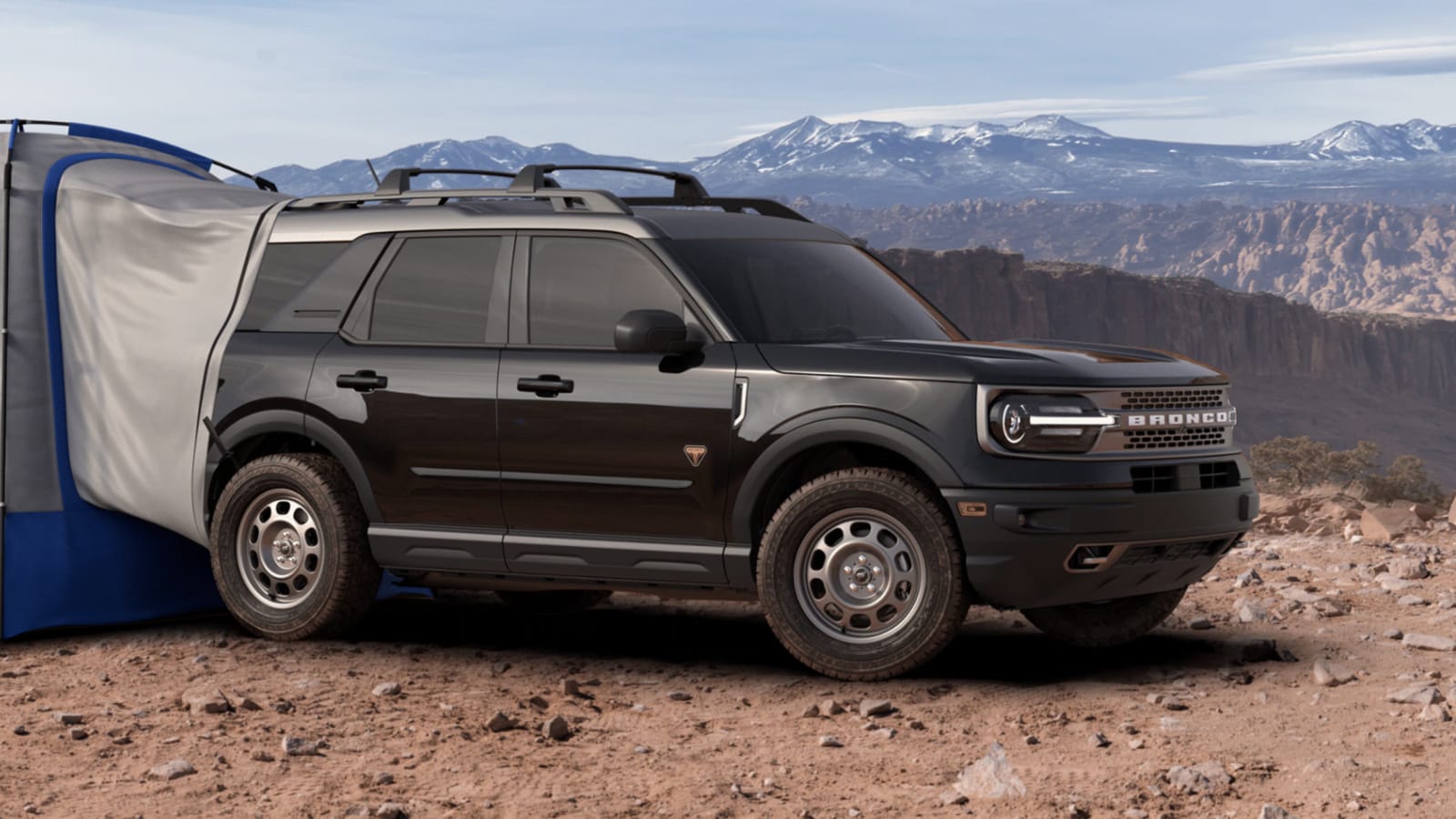 Producer Alex Malburg: As an advocate for experiencing the outdoors, my Bronco Sport needs to be ready off-the-lot for any adventure. Instead of wading through multiple models, Ford lets you pick your "Own Adventure" with preconfigured options. Ultimately choosing Camping as my option, the Badlands model comes with a Sportz SUV Tent designed to connect at the tailgate. My total price came to $37,629 because of the greyed out roof, floor liners, and the Badlands Package. Look, we all need to have good audio and a little more comfort while on the road.