It seems ready to take on competition from Jeep and Subaru

There will be those who dismiss the 2021 Ford Bronco Sport as the knockoff crossover Bronco for poseurs. However, now that we know the specs, have learned more about its capability, and recognize that it was thoughtfully designed with the needs of a different outdoorsy sort in mind, we think it'll be a lot harder to knock Ford's well-rounded effort here.

First, there's an important distinction to be made. Just because you don't do hardcore off-roading with your SUV doesn't mean you don't actually use it outdoors. As Ford correctly pointed out in its pre-reveal press presentation, people treat their vehicles as another vital piece of gear they take on various outdoor adventures. This may seem like marketing shlock, but as someone who lives in the Pacific Northwest where roof racks abound and the neighbors' SUVs return on Sunday evening dirty from a weekend away, this is absolutely real. Let's call it the REI buyer.  It's the sort who typically turns to Subaru, and who Ford is targeting directly with the Bronco Sport.

A full-size spare tire is standard. So too are big, rugged roof racks that include tie-down cutouts. They, along with the roof itself, are strong enough to accommodate a roof-mounted tent and were designed specifically with a variety of racks in mind. The liftgate features large grab handles that serve double duty as a drying rack and a pair of standard LED "floodlights" that bathe up to 129 square feet, making it easier for the cargo area to serve as a base camp. It also has a separate flip-up window and apparently raises higher than normal for fewer clonked heads (though an actual height number for comparison wasn't provided). 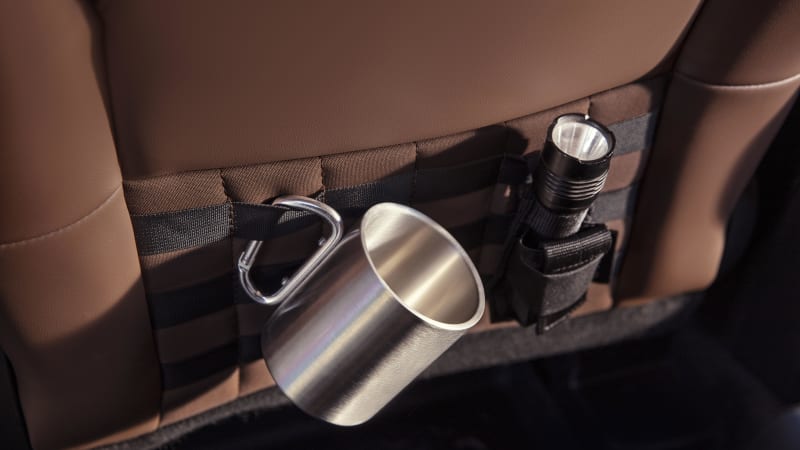 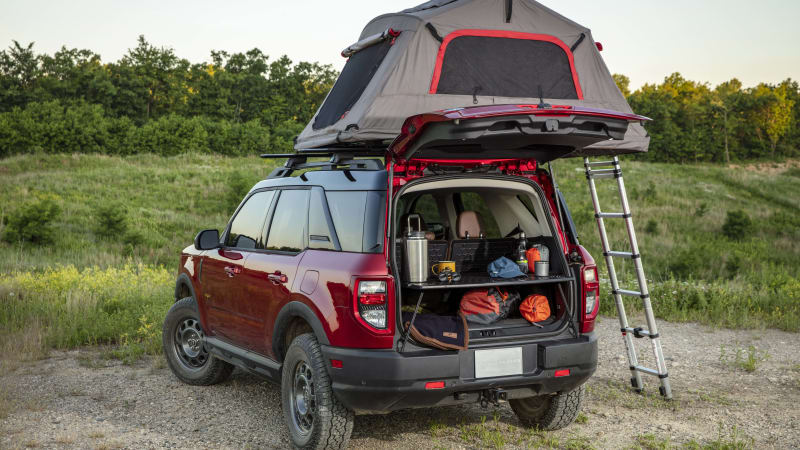 That's just some of the standard stuff. Starting with the Big Bend trim level (the second of four rungs, plus the special First Edition), the Bronco Sport's front seat backs have zippered pockets and a MOLLE strap system that lets you connect whatever you want or need. The seats are upholstered in easy-clean cloth, and the rear flooring is rubberized (in the Badlands trim, the entire cabin floor is rubberized and therefore wash-outable). An old-school bit of Ford tech also gets another day in the sun: The SecureCode access pad lets you lock the key in the car to prevent it from being lost or waterlogged out in the great outdoors.

Then there are the accessories. A Cargo Management System provides five configurations including a two-tier cargo floor and a slide-out tray that juts out to create a sort of tailgate prep station. The cabin and its stepped "safari" roofline was designed specifically to accommodate a bike rack accessory by Yakima that mounts two 27.5-inch-wheel mountain bikes inside. This is just one of the many design choices made after real-world research and a uniquely hands-on development program. In this case, they addressed a pain point for mountain bikers and cyclists concerned with security or the added hassle of mounting bikes onto the roof.

There are also four "lifestyle accessory bundles" dubbed Bike, Snow, Water and Camping, but Ford didn't actually explain what they included in the product information shared prior to the reveal. Nor was there an additional rundown of the "more than 100 factory-backed stand-alone accessories." In any event, it's clear that Ford had a clear idea of who it was designing the Bronco Sport for — its designers and brand managers even made a point to go camping with it while in development. 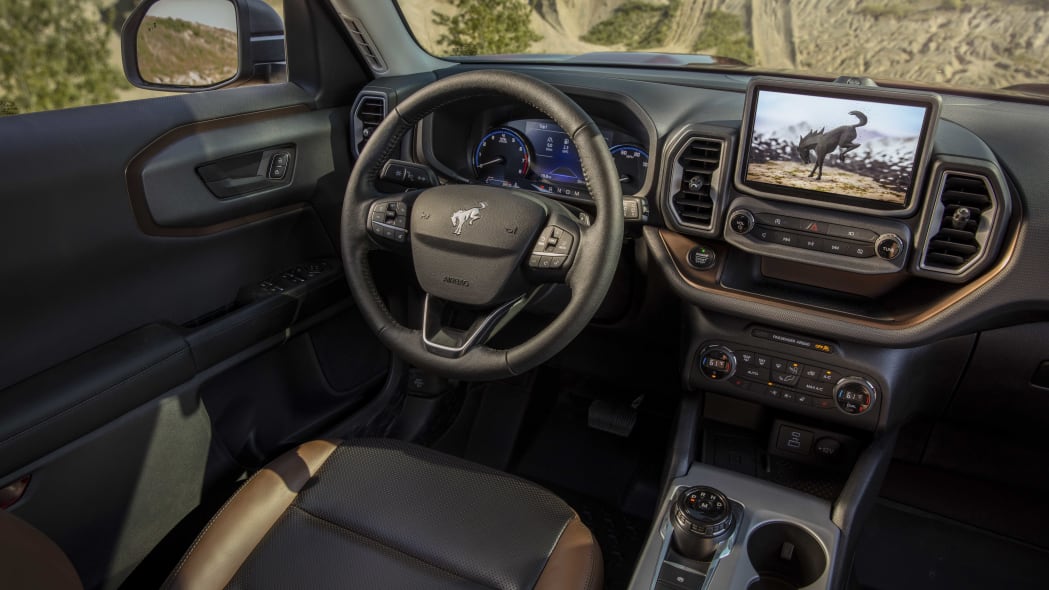 Nevertheless, there is more going on here than a glorified hiking backpack on wheels. As has been widely reported, the 2021 Bronco Sport shares its platform with the 2020 Ford Escape and therefore the next-generation Ford Focus sold nearly everywhere but the United States. However, according to Chief Program Engineer Adrian Aguirre, "This is not an Escape with big tires."

Indeed, the dimensions are quite different. It's more than 3 inches narrower, the wheelbase is 1.6 inches shorter, and the overall length is so much smaller (172.7 inches versus the Escape's 180.5) that the Bronco Sport is considered a subcompact SUV. However, its track is an inch wider than Escape and it’s a considerable 4 to 5 inches taller in height depending on trim level.

Moving beyond comparisons to Escape, the Bronco Sport's ground clearance depends on trim level, but all are higher than usual for a small SUV. The Base and Big Bend trims measure 7.8 inches, the fancy Outer Banks trim is 7.9 (likely due to bigger standard wheels) and the most-rugged Badlands manages 8.8 inches when fitted with the optional 29-inch all-terrain tires. That number is significant since it betters the 8.7 inches offered by the Jeep Cherokee Trailhawk and every Subaru SUV. How much it really matters in the field is highly debatable, but it looks good in a comparison chart.

With those big A/T tires, the Badlands' approach, departure and breakover angles are all roughly equivalent to those of the Jeep Compass and Cherokee Trailhawk (the Compass nips it in a few dimensions, but the bit Cherokee is always a bit behind). Water fording depth is superior to the Jeeps.

Standard on the Base, Big Bend and Outer Banks trim levels is a 1.5-liter turbocharged inline-three that produces 181 horsepower and 190 pound-feet of torque — a greater output than the Escape's 1.5-liter triple. The Badlands and one-year-only First Edition get a 2.0-liter turbo inline-four good for 245 hp and 275 lb-ft, which is a huge amount for a subcompact SUV and even pretty rare among compact SUVs.

An eight-speed automatic transmission is standard and every Bronco Sport is described as having a "4x4 system." It's a safe assumption that it's really an on-demand all-wheel drive system, but there was no information provided about it in the pre-reveal press materials. However, we do know the Badlands and First Edition get an advanced system with a twin-clutch, torque-vectoring rear axle with a locking differential. Apparently, virtually all rear axle torque can be applied to one wheel.

Like its big Bronco brother, the Bronco Sport will come standard with GOAT modes (Go Over Any Terrain) that alter various vehicle parameters and settings to meet different terrain types. Standard are Normal, Eco, Sport and Slippery and Sand, while the Badlands and First Edition gain additional Mud/Ruts and Rock Crawl modes.

Experienced off-roaders may roll their eyes at such things, but chief engineer Adrian Aguirre noted that "many customers said that 4x4 systems are a mystery. They don't know how they work." That doesn't mean they're proud of that and could be perfectly willing to learn. As such, terrain-selectable drive modes like these and even the Bronco Sport itself can serve as a gateway to greater knowledge and involvement. Makes sense to us.

To that end, the Bronco Sport also offers Ford's Trail Control off-roading cruise control system that is also available on the full Bronco as well as Ranger. There's also a front-end camera available to make it easier to spot yourself in tricky situations.

Speaking of which, the Bronco Sport was subjected to an elevated degree of durability testing beyond the usual "Build Ford Tough" regimen of development. According to engineers, the Badlands greatly exceeded the capabilities normally expected of a crossover, but of course, we'll have to wait and test the extent of that claim.

In terms of regular old feature content, the Bronco Sport comes standard with an 8-inch Sync 3 touchscreen interface — not the new Sync 4 system standard on the full Bronco. Apple CarPlay and Android Auto are standard. So too is the Ford Co-Pilot360 suite of driver assistance tech: forward collision warning with pedestrian detection and automatic emergency braking, blind-spot and rear cross-traffic warning, lane-keeping assist and auto high beams. Basically, the stuff that's expected on a compact or even subcompact crossover in the $20,000-$30,000 price range (exact pricing won't be available until closer to its on-sale date later this year, but reservations are now open).

It really would've been easy to cynically dismiss the Bronco Sport if it were just an Escape wearing Bronco clothes. However, despite sharing design cues with its big brother, it's also its own thing stylistically (take that safari roof, for instance) and possesses numerous functional design elements intended for customers who value interior capability more than wheel articulation and removable doors. The Badlands is likely to get the most attention due to its max capabilities and big motor, but to that target REI crowd, the lower trims still offer the distinctive stuff that could matter more.

Perhaps it won't be as impressive when we get to see and drive it in the flesh, but for now, the Bronco Sport seems to be able to stand outside the shadow of its big brother.