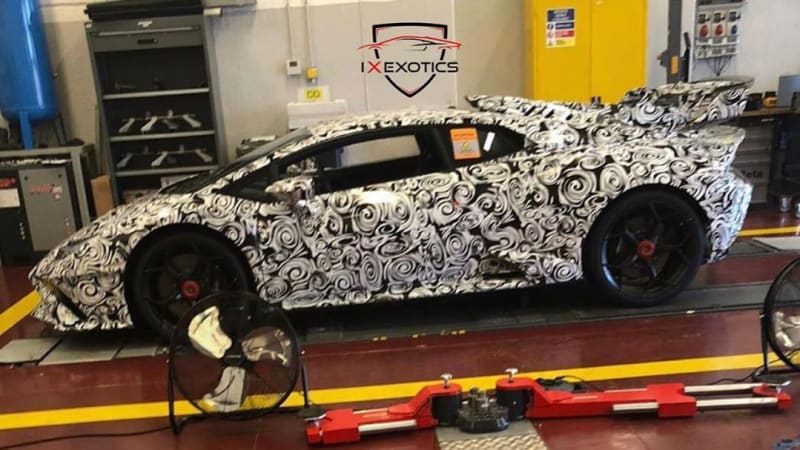 Lamborghini's Squadra Corse motorsports division will soon be showing two takes on two of Lamborghini's marquee products. At the deep end, we have the Aventador-based, 830-horsepower track car recently flogged on a dyno. At the other deep end we have this, which Motor1 caught wind of: Instagram user "allanlambo" uploaded pics of a camouflaged Huracán said to be called the Huracán STO, for Super Trofeo Omologato. If you've seen the automaker's one-make and customer race car, the Huracán Super Trofeo Evo, the camouflaged coupe should look real familiar. From what we can tell, everything from the B-pillar back could have come straight from the competition car — the roof scoop, shark fin, bodacious wing, deep-dish spoiler, and center-lock wheels are all looking for the checkered flag. The rear even copies the overall design and negative spaces from the race car, as well as the diffuser, the only major change being the rear lights from the road car. The STO, according to Internet rumor and forum postings, will be a limited-edition road-going version of the race car.

Automobile mentioned this very creature late last year but only in passing, as a side dish to the possibility of a production Sterrato off-road sports car. According to a PistonHeads forum, word is the Huracán STO is about making the most of the Huracán Evo's already potent package, so the naturally-aspirated 5.2-liter V10 with 632 horsepower and 442 pound-feet of torque goes unchanged. The engine will have less weight to shift, thanks to a diet expected to shed around 330 pounds. All power will go to the rear wheels, and as a Squadra Corse production, the Lamborghini Talk forum claims that the coupe won't get the ALA system that improves handling. Backroom chatter has it that the STO was designed for superior hotshoes who carry their personal ALA systems somewhere between their solar plexii and their gall bladders, not for the merely average hotshoes who praise technology for keeping them out of gravel traps. Other add-ons like a racing clutch, a mechanical differential, and bigger brakes have been mentioned as potential upgrades.

Both forums peg a debut during Monterey Car Week in August, before the car goes on sale late this year as a 2021 model. The automaker supposedly intended the STO to be a small-batch special for dealer-backed race teams and Squadra Corse clients, akin to the Ferrari 488 Pista Piloti, but has opened sales to a wider audience. That doesn't mean the opening is large, however; Lamborghini's apparently spiffed up a customer grading system, so dealers can submit willing buyers and the factory will choose which applicants win. Owners have heard build numbers of between 400 and 700 units, dealers said to be lobbying for that lower number or even fewer. Applicants who lose out shouldn't despair, there's rumor of a Huracán Superleggera arriving before the model gives way to the next generation sometime around 2023.