Expect it to arrive in showrooms this summer

MIAMI — Genesis unveiled the GV80, its first SUV, in its home market of South Korea earlier this month. Now the GV80 has made its first appearance in the United States, with a splashy party in Miami and a new TV commercial that will air during Super Bowl LIV. Along the way, we’ve learned more about the new GV80, with specifics to the U.S. version.

While the Korean market will get the GV80 with a 3.0-liter diesel engine, the U.S. model will be offered with a choice of two gasoline engines: a 2.5-liter turbocharged inline-four and a 3.5-liter turbo V6. Horsepower figures have not been announced, but figure the turbo four will be good for 300 horsepower (it will make 295 ponies in the Sonata N), while the V6 should come in at better than 370 horses. Both are paired with an eight-speed automatic, and both engines available with either rear-wheel drive or all-wheel drive.

Upper trim levels of the GV80 will get adaptive dampers that can adjust their firmness in response to information from a camera trained on the road ahead. Standard active-safety features will include forward collision warning with automatic emergency braking, blind-spot monitoring, rear cross-traffic alert, and adaptive cruise control. The adaptive cruise control incorporates a second-generation version of Hyundai’s Highway Driving Assist (HDA) semi-automated steering feature. HDA II adds automatic lane changing, as seen on some Mercedes-Benz models and the new version of Cadillac's Super Cruise.

The GV80 rides on a new platform that also will underpin the next-generation G80 sedan (which follows the SUV to market by just a few weeks). Riding on a 116.3-inch wheelbase, the GV80 is 194.7 inches long, 77.8 inches wide, and 67.5 inches tall. That makes the GV80 slightly larger than a Lexus RX and smaller than a Lincoln Aviator. The GV80’s close dimensional doppelganger is the BMW X5, which is nearly the same length but a little over an inch wider and taller. The Genesis in person looks low for a crossover, particularly at the rear, less so at the front thanks to the oversized shield grille. The twin-bar headlights and taillights (echoed in the trim on the front fenders) will become a Genesis design feature. “Two lines will come to define Genesis,” says Luc Donkerwolke, EVP chief design officer Hyundai Motor Group.

The minimalist interior reflects the Korean concept of “the beauty of white space,” according to Sung Yup Lee, SVP and head of Genesis Design. He also points out that the dashboard design “supports the horizontal architecture of the car,” with the full-width air vents that are executed without cut lines. Floating above the vents is a 14.5” central touchscreen, which also can be operated via a click-wheel on the console. A second dial selects gears, with Reverse to the left, Drive to the right, and Park activated by a button at the center. A virtual instrument cluster is standard, and incorporates a blind-spot-view monitor, which shows a camera feed in the cluster when a turn signal is actuated, a feature already available on the Hyundai Palisade and the new Sonata. 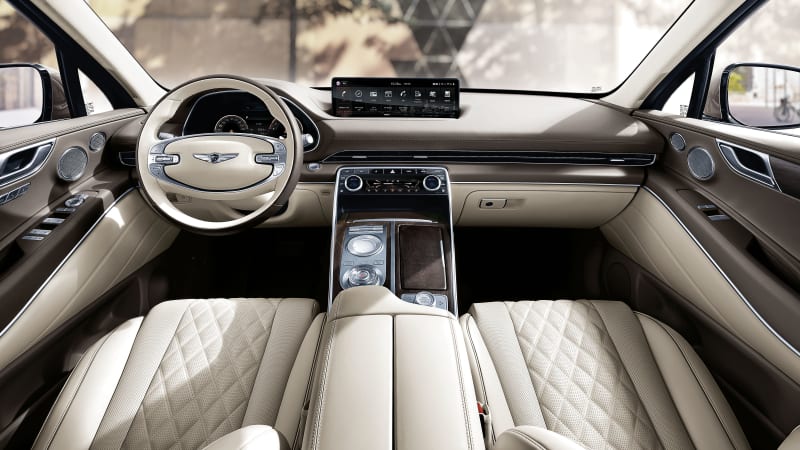 Both the second row and the optional third row will offer power folding. The third-row seat is strictly a kid zone, and cargo space behind it is limited. The controversial two-spoke steering wheel is part of the design minimalism but will not spread to the sedan models. The quilted stitch pattern will be for upper trims, with lower-spec versions getting a different design. Several two-tone interior color combinations will be offered, as well as all-black. Options include a panoramic sunroof and soft-closing doors.

Pricing has not yet been released, but is tipped to start above $50k. The GV80 rolls into showrooms this summer. 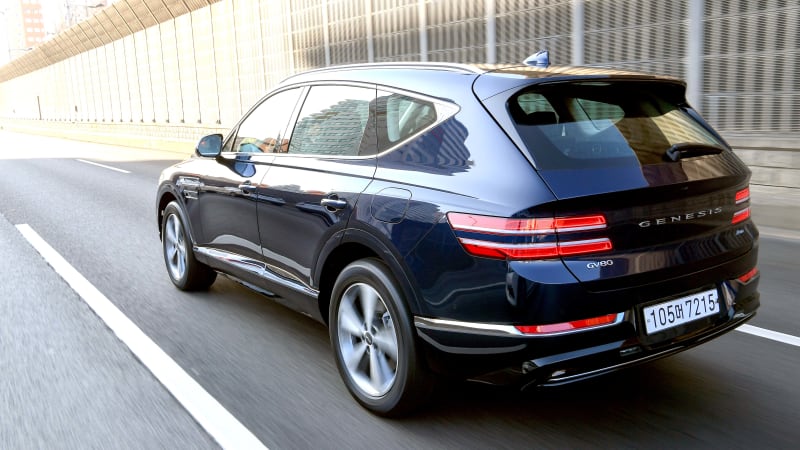