The Nissan 620 pickup, sold as the Datsun Truck in North America, proved to be a strong seller over here during the 1970s, and hopes were high in Yokohama that sales of its successor, the 720, would crush the likes of the Toyota Truck, the Chevy LUV, the Ford Courier, the Dodge D-50/Plymouth Arrow, the Mazda B2000 and the VW Rabbit Pickup. That didn't quite happen, but the 720 proved very popular here for its 1980-1986 model-year run. Here's a first-year 4x4 King Cab Datsun Truck, complete with some options you don't often see on inexpensive Malaise Era small pickups. 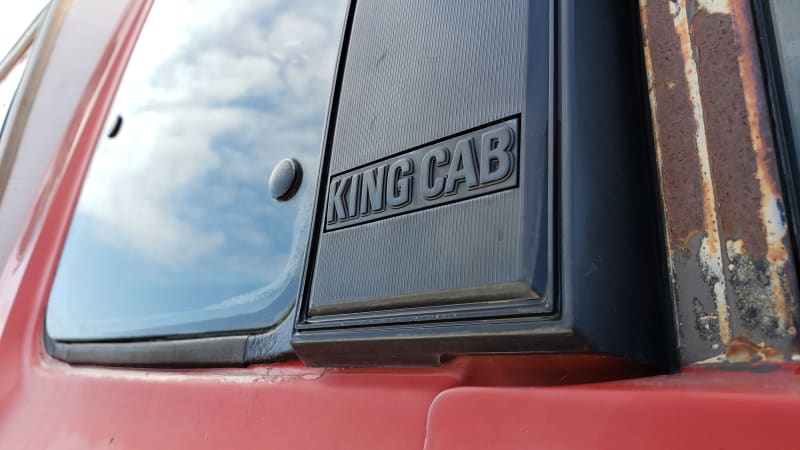 By the standards of 21st-century pickups, the optional King Cab wasn't kingly at all. A couple of fold-up jump seats in the back made it possible, in theory, to fit four adults in the cab (but most King Cab owners just used the extra space for cargo). Pickup owners were tougher back then and didn't require as much space in the cab. 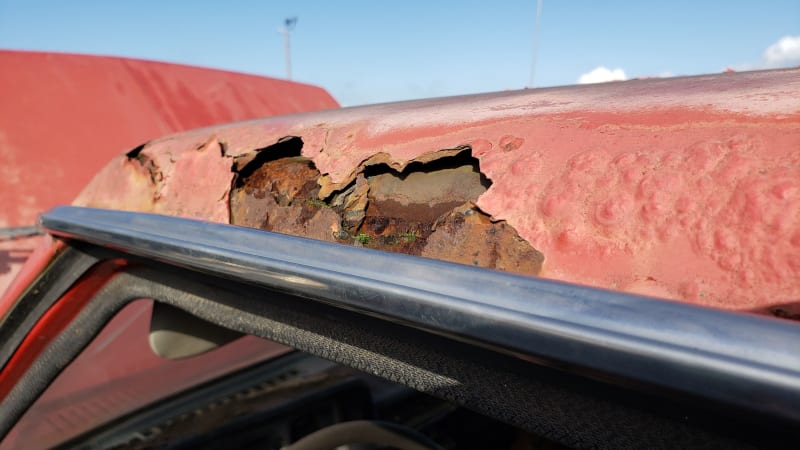 Before you Nissan fanatics get too worked up over this nice truck getting scrapped, be aware of the nasty California-style top-down rust around the drip rails. This is what happens when the paint gets nuked by the sun, followed by rainwater building up during the rainy winters; I found this truck in a yard near Monterey, which gets a lot of coastal salt spray as well. 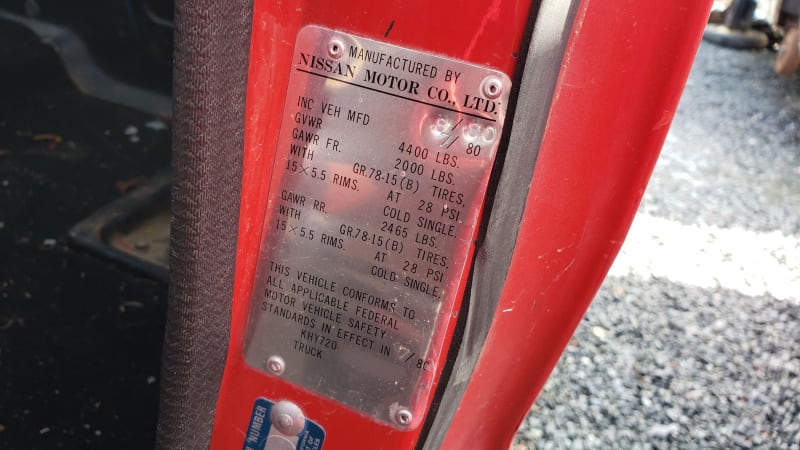 I've never seen a re-stamped factory build tag like this before. It's combined with a Replacement Identification Number tag from the State of California, so perhaps some regulatory problems kept this truck from being registered as a July 1980-built machine. 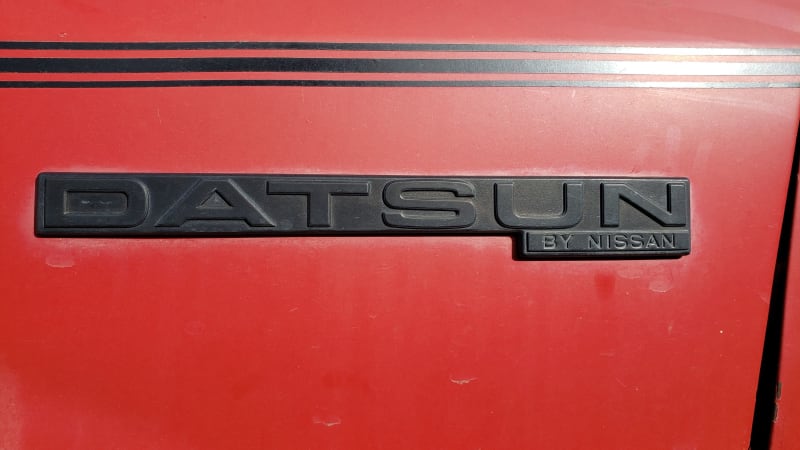 Nissan was just beginning the process of shifting from the Datsun name to the Nissan name in North America in 1980; it wasn't until 1984 that the Datsun name disappeared completely (some weird badging exercises, such as the Datsun 810 Maxima by Nissan, came out of this process). 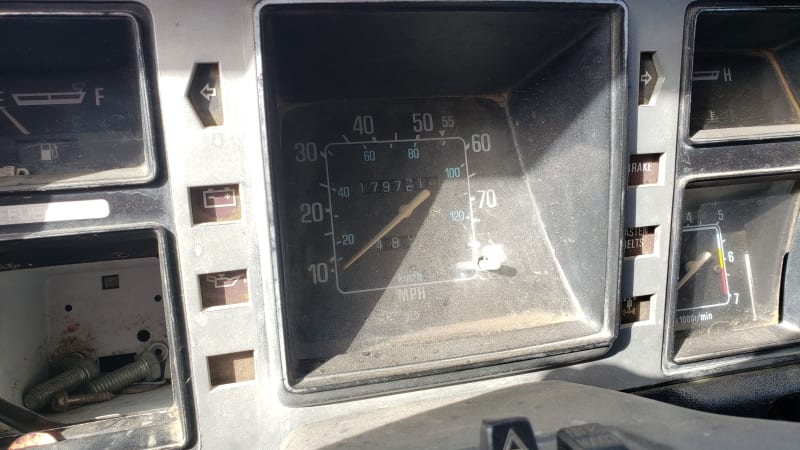 Not quite 180,000 miles on the odometer, which is quite low for a 39-year-old Japanese pickup. That reading (plus the rust around the top of the cab) suggests that this truck got parked a couple of decades back and only now departed for the junkyard as a result of some yard- or driveway-clearing project. 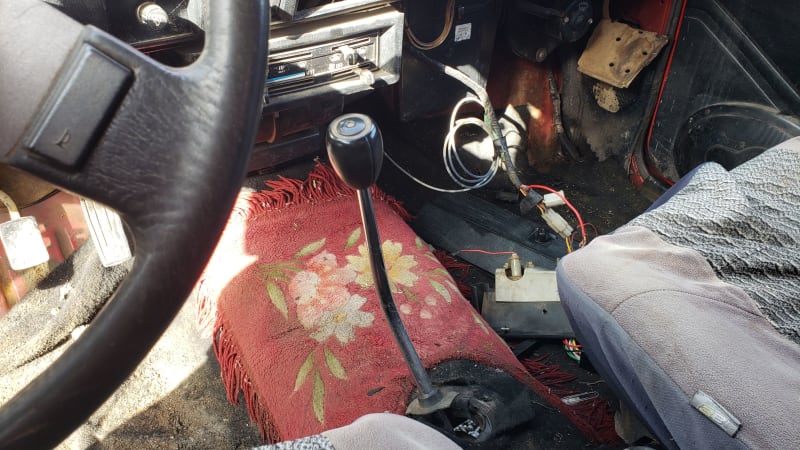 Not only does this truck have paint stripes and a factory tachometer — pretty rare for a small truck in 1980 — but it has air conditioning. Most of the frugal types who bought Datsun Trucks in 1980 weren't willing to squander money on comfort options! The transmission is the base four-speed manual, probably because the original buyer preferred three pedals to two. 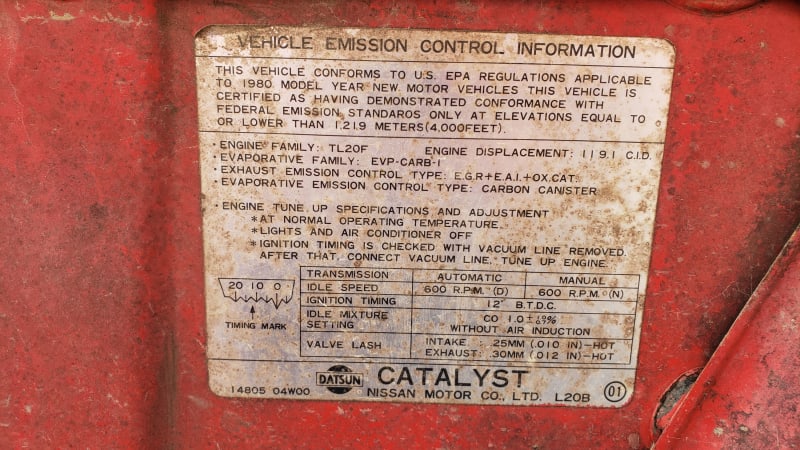 The emissions sticker indicates that this is a "49-state" federal truck intended for use at low altitudes, not originally sold in California (unless California used federal light-truck emission standards in 1980). 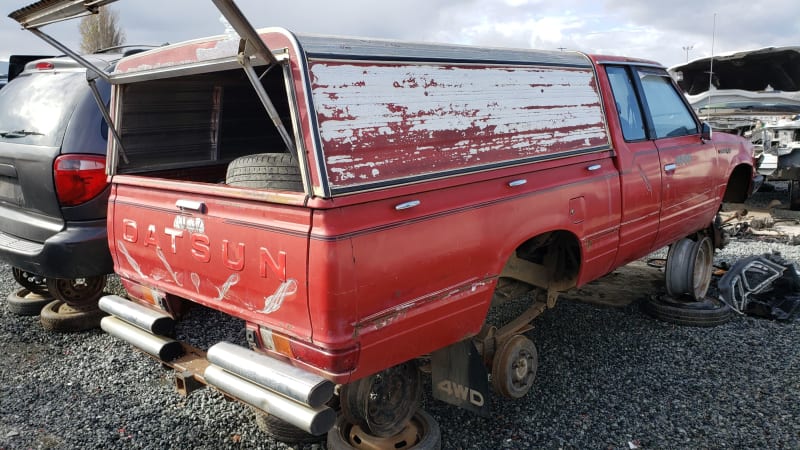 Maybe some junkyard shopper will take the camper shell and aftermarket rear bumper.

Datsun was driven to revolutionize the pickup!