They may not be coming as soon as they've said, but everybody wants in

"Our service will be on-demand and ultimately autonomous," said Remo Gerber of Munich-based Lilium, speaking at the Web Summit (Europe's version of CES) in Portugal last month. OK, just another ride-hailing service that wants to do self-driving cars, right?

Well, not exactly. Lilium is one of a growing number of companies that wants to field ride-hailing ... airplanes. Specifically, vertical takeoff and landing ( VTOL) urban air taxis that could be booked via a cellphone app, just like Uber or Lyft.

From a city center pad, the small craft would lift off like a helicopter (but quieter, because it's electric) then take off and fly horizontally at up to 185 miles per hour. That same 185 miles is also the projected range. It's not a science-fiction dream anymore, but reality for startups and big players such as Uber and Airbus. And they claim they'll be in the air in just a few years.

Take those claims lightly. VTOL ride sharing will happen, but in a longer timeline. Remember Terrafugia, a flying car with fold-up wings that was the "future of personal transportation"? Flying car dreams have been dashed since the 1950s, and Terrafugia (launched in 2006) has set any number of dates for product availability. The current date is 2023, but in 2015, Terrafugia was telling the press, "We're anticipating a delivery in the first half of 2016."

Of course, car companies make overly optimistic delivery projections all the time, so what else is new? And another flying car company, the Netherlands' PAL-V, showed what it said was a final production version of its $600,000 Pioneer model in Geneva this year. But with VTOLs we're talking about a completely new form of transportation. Because it's new, it's not going to take off anytime soon. 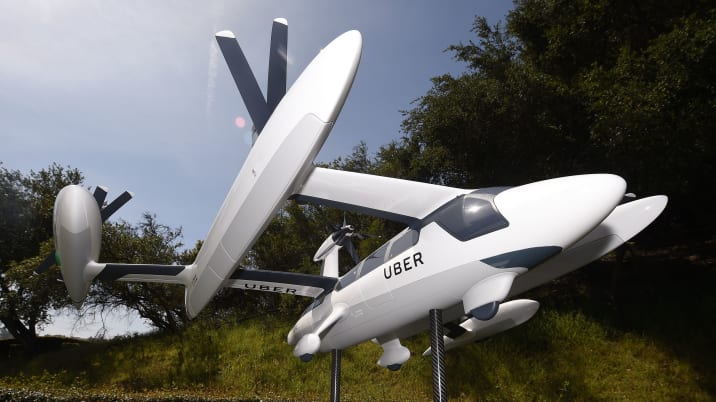 The VTOL technology has been demonstrated — Lilium, for instance, is using electric jets, and has had a successful maiden voyage with a two-seat version of what will eventually be a five-seater in-service aircraft — but it's a long way from test flights to production-ready aircraft and safe skies. Just as with self-driving cars, there are major regulatory hurdles and unanswered questions.

Nonetheless, Gerber says that autonomous air taxis will happen "sooner than everyone thinks," and that its time to get "very excited." The company, which completed a $90 million Series B funding round earlier this year, is targeting 2025 for starting its service "in several locations" with what Gerber said is "a hundred, if not hundreds, of jets." In a later email, the company said it was planning the commercial launch "in the early 2020s." The idea, Gerber said, is not short hops "from one skyscraper to another," but, say, JFK Airport to downtown Manhattan, which could take just five minutes.

Gerber said the world is going to "reimagine how mobility works and how we travel. Flying can become part of your regular day, and priced like Uber or Lyft. The operating costs are surprisingly low."

Germany-based Volocopter demonstrated its VTOL with a test flight in Dubai last year. The company's co-founder, Alexander Zosel, said at the Web Summit last year that the service would be up and running by 2020 or 2022. That's about the same timeframe as Zunum Aero, backed by Boeing Horizon X and Jet Blue Technology Ventures. Its more conventional "hybrid-to-electric" planes are larger than others (12 passengers), and have a 2022 date attached. The company envisions walk-to-the-plane San Jose to Tahoe one-day round trips for $100.

Airbus' Vahana electric Alpha One VTOL was demonstrated January 31 (moved back from late 2017), but the autonomous flight lasted only 53 seconds. Also being tested is CityAirbus, a VTOL for up to four passengers. The company also conducted a trial in Brazil of its helicopter ride-hailing service, Voom. Airbus cites the high cost of on-ground traffic snarls, and adds that it "is focusing its attention on a part of the city that remains congestion-free: the sky."

Airbus, for one, isn't announcing stretch dates, but it recently published a " roadmap for the safe integration of autonomous aircraft" that predicts, sooner rather than later, that "autonomous aircraft will be transporting people and goods all over the world." 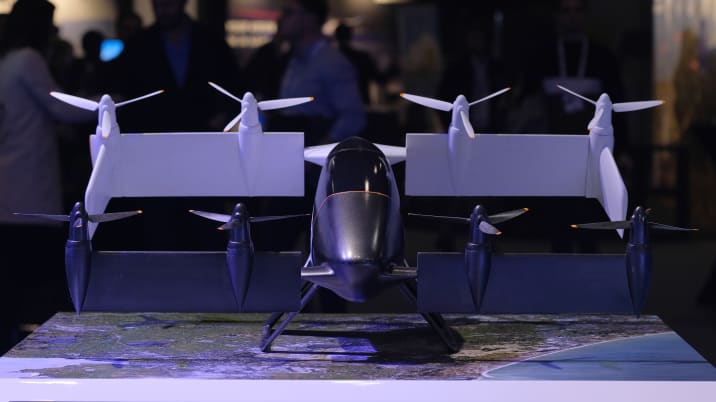 But the blueprint also gets at the heart of the challenge in predicting that current air traffic — including commercial and cargo flights and helicopters — will double in the next 15 years. Managing the crowded skies is going to be a major, time-consuming project that needs strict standards, global rules and very sophisticated fail-safe technology. Airbus' report calls for a global plan for shared widely accessible airspace that is "futureproof," i.e., ready for technical breakthroughs we can't now imagine.

Lilium acknowledges the regulatory hurdle, but says it's on track. "Creating the necessary infrastructure to operate an air mobility service will be key to Lilium's commercial launch," the company said in an email. "To ensure this, Lilium is in promising talks with multiple commercial partners, including a range of international cities and state governments." Autonomy is definitely part of the mix, but it's in the future. "The jet will be operated by pilots in the primary years of the companies' operation," the company said.

Everybody wants in. Uber's entry is called Uber Air, and its electric VTOL concept was shown in prototype form last May. Uber is targeting rides (eventually autonomous) of up to 60 miles — at rates not far off from terrestrial Uber. The company thinks it can begin commercial operations in 2023, only five years from now. But Uber has also targeted 2020 for pilot programs, with Los Angeles, Dallas-Fort Worth and Dubai in the running.

Justin Erlich, who left his Uber post as head of policy, autonomous vehicles and urban aviation earlier this year, confirmed the company's proposed 2023 date for commercial deployment, with autonomous flight to be phased in later. "I think a feasible timeline for air taxis to be operating at some sort of reasonable scale in some cities is probably somewhere in the mid to late 2020s," he said in an email.

I'd add another five years to that. Just to be, well, safe. 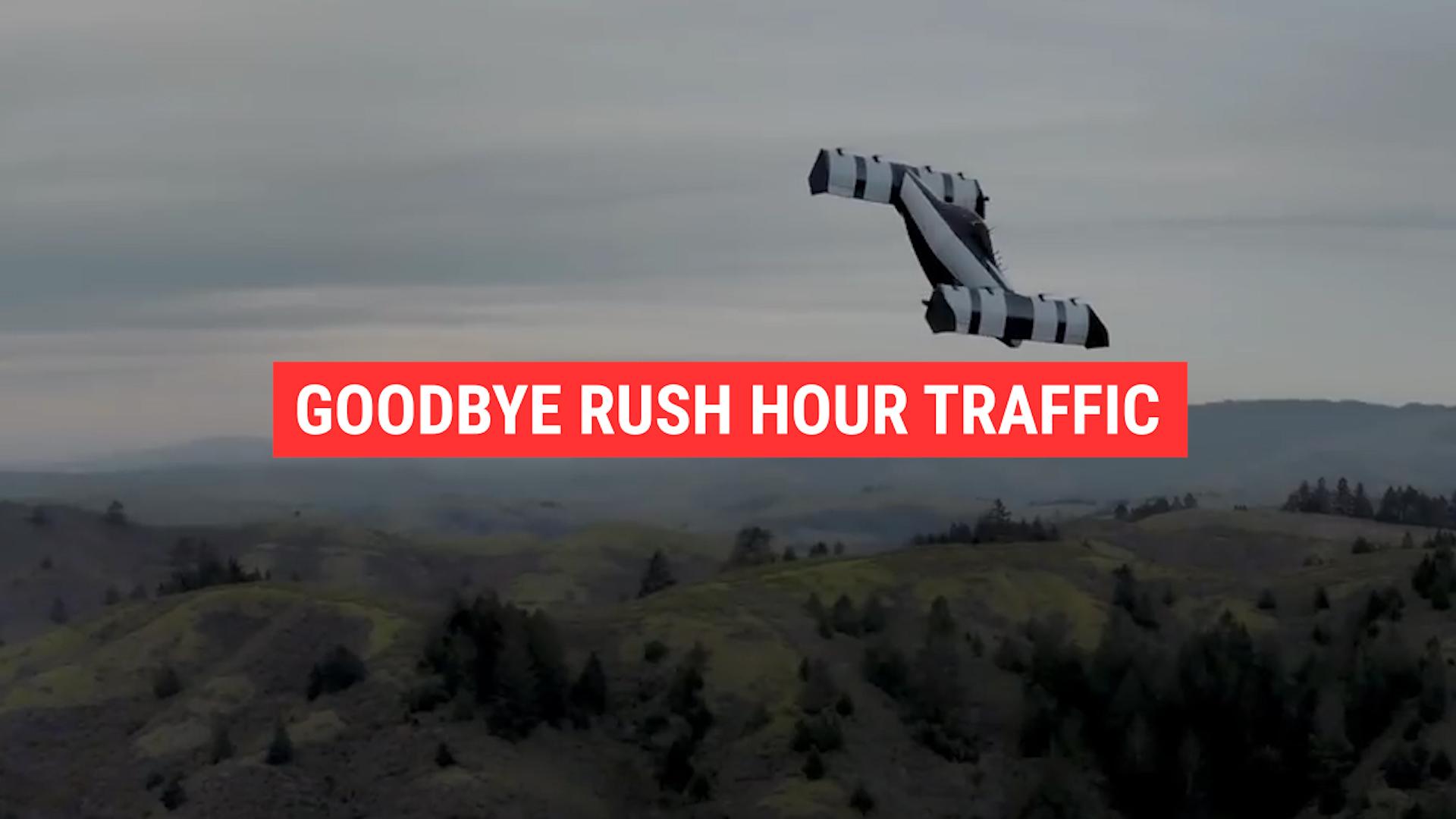