Audi might bring back historic Horch name as Maybach rival

It looks like Mercedes-Benz isn't the only German manufacturer to reach far back into history for a nameplate. Audi is reportedly bringing back Horch for its high-end vehicles.

Horch, an early 20th-century luxury carmaker, was one of the four brands that originally formed Auto Union in 1932, together with Audi, DKW and Wanderer. The union of four carmakers chose a four-ring logo to stand for their joint venture, and the famous logo survives to this day on Audis. But Horch was always a higher-class product than Audis, and as an equal of Mercedes-Maybach the name should serve it well.

The name Horch even dates back to the early days of Audi, as Audi itself was set up in 1910 by businessman August Horch, who used a Latin form of his surname to name his new company — after squabbles saw him ousted from the automaker he first founded.

Automotive News is reporting that the Horch name would be re-introduced for range-topping versions of the A8 sedan, after the A8 is facelifted in a few years. It would be seen together with either a V8 or a W12 engine; though the latter is said to be on hold at the moment. The W12 engine is the same as used on the Bentley Bentayga, and Audi's R&D boss Peter Mertens said at the Geneva show this March that the 12-cylinder engine would feature in the A8 at some point. If it is fitted in the current-generation A8, it will be as a swan song for 12-cylinder engines in Audis, as the carmaker continues its moves into electrification of future products.

A Horch-badged W12 version of the car would make sense for the occasion, and 585 horsepower would certainly be worthy of the name. There would not be a distinct Horch car, unlike with earlier Maybachs: having undoubtedly paid close attention to Mercedes-Benz's early-2000s Maybach-branded cars and their somewhat disappointing sales figures, Audi would only use the Horch name for a high-end trim level, recognizable from special detailing and different wheels, instead of developing new Horch cars with different bodies.

If the W12 engine does not make it into an Audi anymore, the four-liter V8 engine, available in the United States next summer, has 460 hp. Earlier reports also have hinted that the new S8 would receive the Panamera Turbo's biturbo V8 with up to 540 horsepower. A possible E-Tron development is also in the cards, and we wouldn't be surprised if a top-of-the-line Horch would also be whisked away in silence by electric motors. 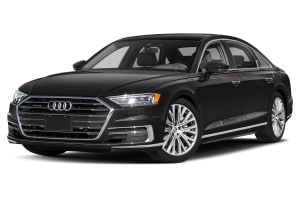